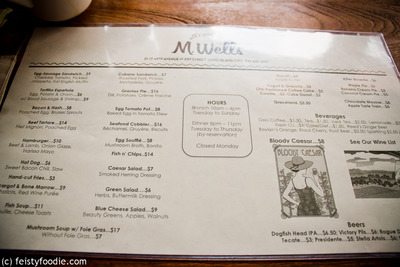 One Friday afternoon, I met up with James, Talida, Noah and Steve for lunch at M. Wells Diner.  I’m unbelievably behind on blog-reading (like, will never get caught up, ever), but apparently this place has been talked up and down the blogosphere as though it’s like, the latest gift to food bloggers.  Or something.  And with its location directly above a train station, along with the wide open windows to let in all the light possible for photographs, that just may be the case… Though on this particular mid-February afternoon, the unseasonable sun beat down on us mercilessly and I was more than a little uncomfortable from the heat, and my inability to adjust my (brand new) camera settings for the bright light.  Excuse the pictures – I’m still learning how to use this thing.  Except the last one, because that is something of an omfg I can’t believe I took that one… a total beauty.  Love. 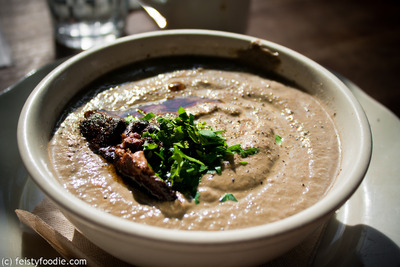 Talida and I decided to split a bunch of things, because we’re cool like that.  First up was the mushroom soup with foie gras.  You can order it without foie gras for $10 less, but of course we decided um, yes please.  But then we had a taste… and this soup, to be completely fair, needed no foie gras.  I can’t even believe I’m saying that, but it’s true; the creamy, rich, earthy soup was just… so good.  Whoa.  Sure, a bite of foie with each spoonful of the soup was great, but it was just gilding the lily.  The mushroom soup stood on its own: pure essence of mushroom, everything delicious about mushrooms boiled down (no pun intended) into a single bowl of awesome.  Get this – even without the foie gras – you won’t regret it.  Unless you hate mushrooms; but if that’s the case, we can’t be friends. 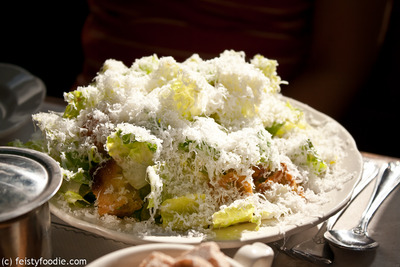 I’m not naming names, but there’s got to be some law about food bloggers who order Caesar salads.  Whoever it was that said “you don’t win friends with salads” was quite right… and I don’t recall trying this at all 😉 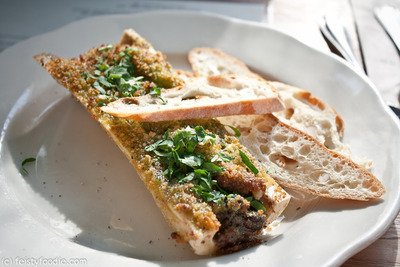 While the boys were busy eating their salad, Talida and I continued on our path to gluttony and indulged in escargots and bone marrow.  Such a combination may sound a bit odd – or it did to me – but together, the flavors really sang. 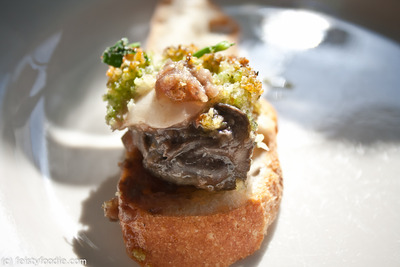 Garlicky escargots, smooth and creamy, played against the richness of the fatty beef marrow and the crunchy breadcrumbs just perfectly, creating one of the most perfect bites in recent memory.  Yum. 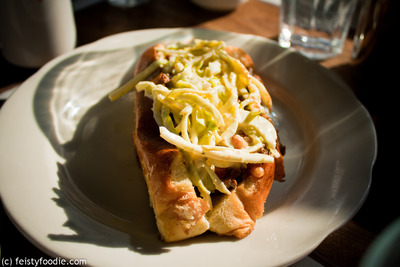 Noah ordered a hot dog, but I didn’t try it… I only got this terrible photograph of it. 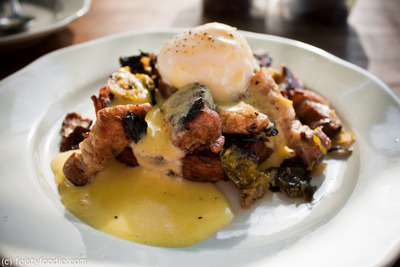 The bacon and hash arrived shortly after that – a poached egg atop bacon with potatoes, brussels sprouts, and some sort of bean. 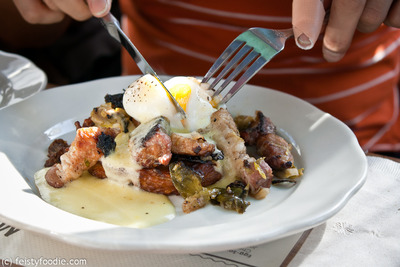 A shot of James breaking into the poached egg on top. 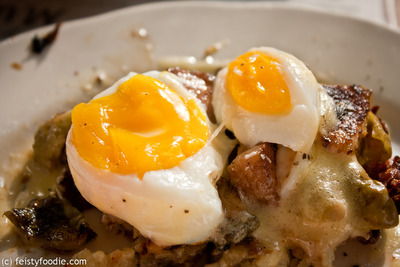 Sadly, both of the eggs (we had two orders) were overcooked; one of my greatest disappointments ordering poached eggs anytime, anywhere, is when the yolk isn’t runny.  A dish like this deserves a runny yolk oozing all over the hash, creating its own gravy and just mixing with everything, omg… but t’was not to be.  Boo. 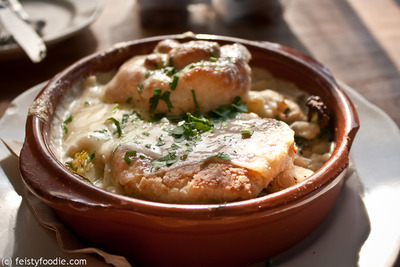 One of the guys also ordered the seafood cobbler, with gruyere, bechamel and biscuits. 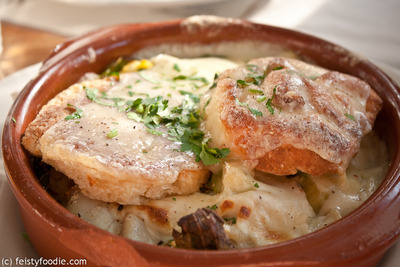 I think I tried a bite, but I don’t really remember it.  I do remember someone loving it though… 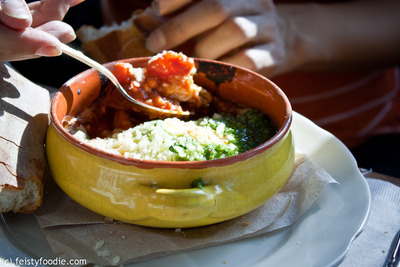 Another action shot: the egg tomato pot, or egg baked in tomato sauce.  I didn’t try this one either, though I heard people liked it… 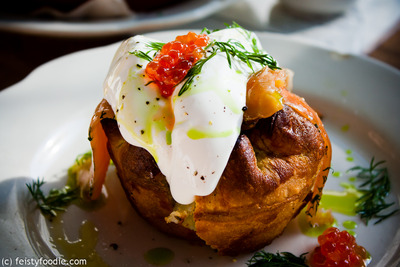 What took the longest to arrive – and quite possibly they forgot to even put the order in until we asked? was the gravlax pie. 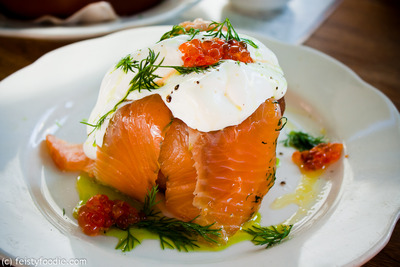 Unfortunately, the dish looked much more gorgeous than it tasted – or that’s how I felt, anyway.  Others seemed to like it fine enough, while I found it less exciting than I’d have liked – an overall meh.  The salmon was OK, and while the innards boasted hot potatoes, taking a bite with the creme fraiche, the cured salmon, just didn’t do it for me.  Ah well – maybe it’s because I was super full by this point?  Nah.

Yvo says: The menu changes frequently, but I’d say there’s enough on the menu to pick some really good dishes, without being overwhelming.  However, two of the other people had been multiple times and found that some dishes they’d tried before were better – or worse – other times.  So some of the dishes can be hit or miss, which is a real shame, because much of what we tried was unique and delicious (and some of it just unique…).  I definitely say give it a go, it’s right over a train station and only about 10 minutes from midtown via the 7 train, you might just find some amazing dishes await you…
recommended