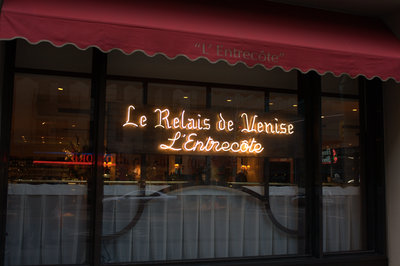 After wandering around the Coffee & Tea Festival for a while, BeerBoor mentioned to me that he had a Groupon for Le Relais de Venise and asked if I wanted to walk over for dinner.  I agreed, so we took our time walking over and still managed to get there before it opened at 5:30pm.  So this is what it’s like hanging out with old people: they eat dinner as soon as restaurants open to serve! 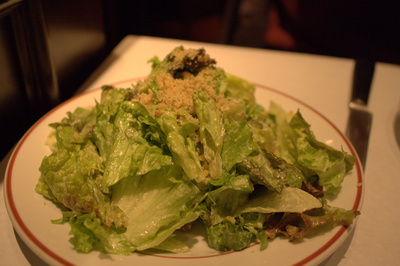 The thing about Le Relais is that there isn’t much of a menu: for $24.95, you get salad, then steak & frites, served in two portions.  Neither of us are vegetarian so there wasn’t much to think about… here is the salad, topped with chopped walnuts and a very light dressing.  The walnuts got stuck in my not-entirely-straight teeth a few times, which annoyed me, but it was a nice, light start to the meal, and forced veggies on me when I might not otherwise eat veggies. 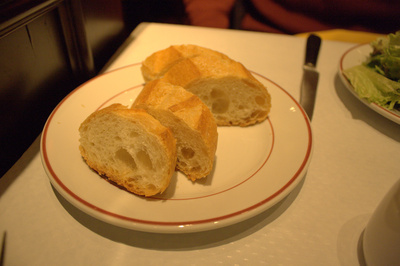 No olive oil or butter with the bread, which I thought was odd.  Given that it is a French restaurant, I expected tons of butter everywhere, but not so.  It was sufficiently tasty bread. 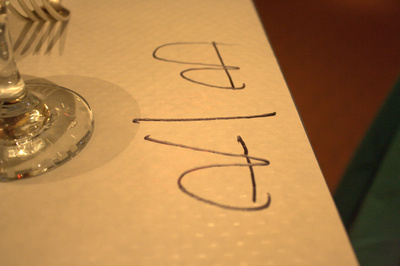 Le Relais only serves steak four ways: blue, rare, medium and well done.  I clearly wasn’t listening carefully when our server said this, because I immediately said “medium rare, please,” but was politely informed they do not do that.  Okay, rare is fine; that’s how I used to order steak until I discovered that just the slightest bit more cooked really floats my steak boat, but no biggie.

Blue or blue rare for those who don’t know – and why should you, it isn’t very common to see this offered (though I’m sure many steakhouses will do it if asked) – basically means you take the steak and sort of wave it in the direction of the grill.  Ha, just kidding, it’s just as rare as humanly possible.  Kissed by the grill, if you will.  I’ve tried ordering this in the past and been denied – perhaps it was because it was a week after I learned the term, and I was at a Boulder Creek – so I was ready to order it, but after a moment of discussion, BeerBoor said he was going to order his steak blue, so I went the safe route and got rare.  (It’s been a long time since I’ve wanted rare steak, so blue might have just been toooooo rare for me!) 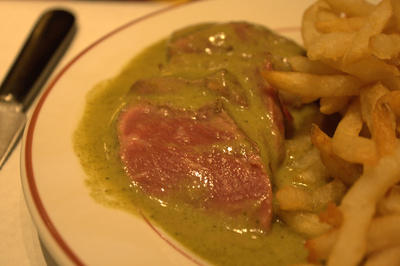 BeerBoor’s blue steak (with the sauce scraped aside so you can see how rare it is) – the lightest kiss of searing around the outside, and the center was cool (as he said).  I didn’t try a piece, because looking at it, I don’t think I’d have enjoyed it as much as he did.  He put one piece in his mouth while I was still taking photographs of my food, and was moaning how good it was before I’d finished. 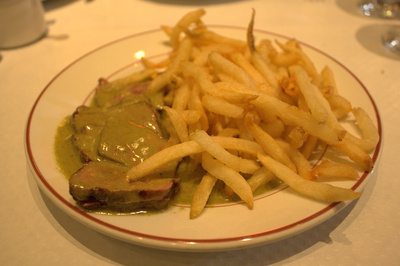 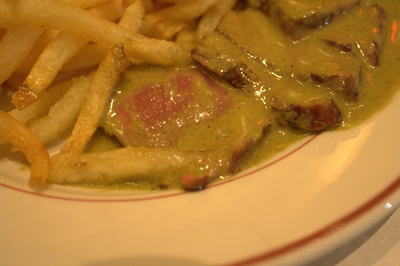 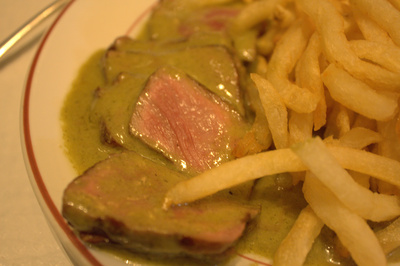 Covered in a mustardy sauce that reminded me of Green Goddess dressing with extra mustard, the steak was super tender and quite tasty, though it really is all about the sauce here.  Eating a piece without the sauce was not an option – not just because it was coated in the stuff, but because without it, the meat was boring as all get-out.  The frites were perfectly cooked, crisp, and delicious, but also even better dipped briefly in the sauce.  YUM. 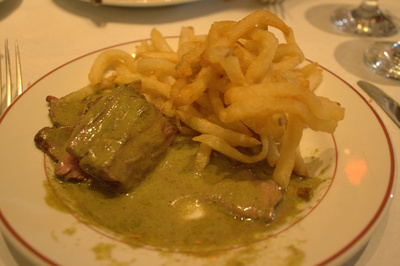 After about 10 minutes, our second portions – being kept warm elsewhere – were brought over and served to us.  A nice touch, especially because despite being kept warm, their levels of doneness did not change.  Perfectly cooked, really, and incredibly enjoyable.  I was very happy and full, though not stuffed to the point of discomfort.

Cutely, our server brought us the dessert menu and left it with us, then came back a few minutes later to ask us if we had any questions because “if you aren’t regulars, you might not know what the items are… because it’s in French.”  It was cute because it didn’t occur to her until a few minutes later that we might not be able to read French… luckily, I can read French (and in a few months, I should be able to have longer conversations in French… I hope!), but didn’t want anything else.

Yvo says: I cannot imagine why I would not return.  Understand that with tax/tip, drinking water, this meal comes out to about $30 a person – a steal when you consider you’re eating really good steak, lots of fries and a tasty salad… But with the Groupon, the total (before tip) came out to $15 or so.  After leaving a generous tip, the total was about $30.  Crazy cheap for a good meal, really.  If Groupon comes out with this deal again, totally jumping on it!
recommended even without the Groupon, but with, you’d have to be crazy or a vegetarian/non-beef eater to not want to eat here