As TT has previously mentioned, I was recently in South Africa. My friend DY and I were fortunate enough to follow MVB home for the holidays and MVB’s family was kind enough to cook many traditional South African goodies!

Before leaving, I may have perused just a few South African eats website and provided MVB with a list of foods I was interested in trying during our trip. Little did I know that I would be lucky enough to get true home-cooking while I was there! The VB-family was kind enough to forgo their traditional Christmas Eve dinner for me.

One of the dishes I was most interested in trying was the Bobotie. 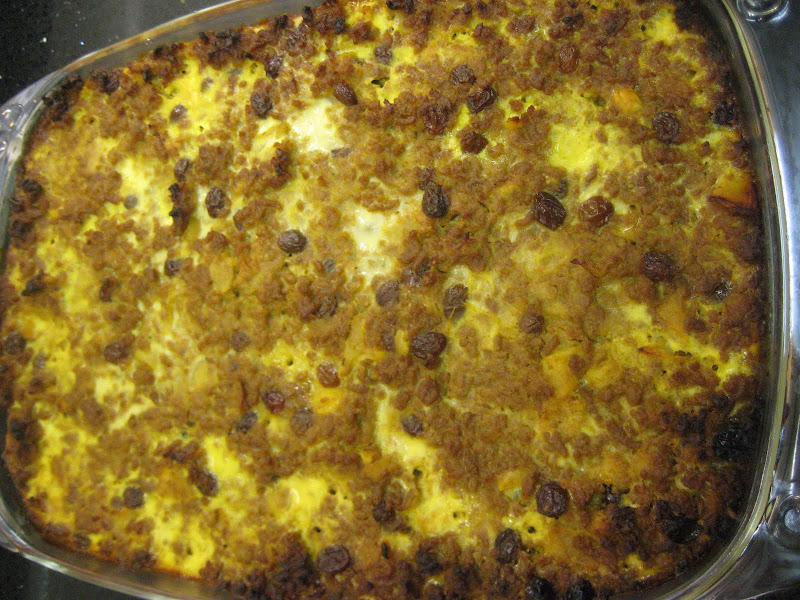 This was ground beef mixed with spices and raisins. It was truly amazing! It had so much flavor without feeling heavy. I would happily eat a huge bowl of just this with rice.

There was also a traditional lamb stew with potatoes, which has a great flavor and the curry/stew-ness mixed in very well with the yellow rice. 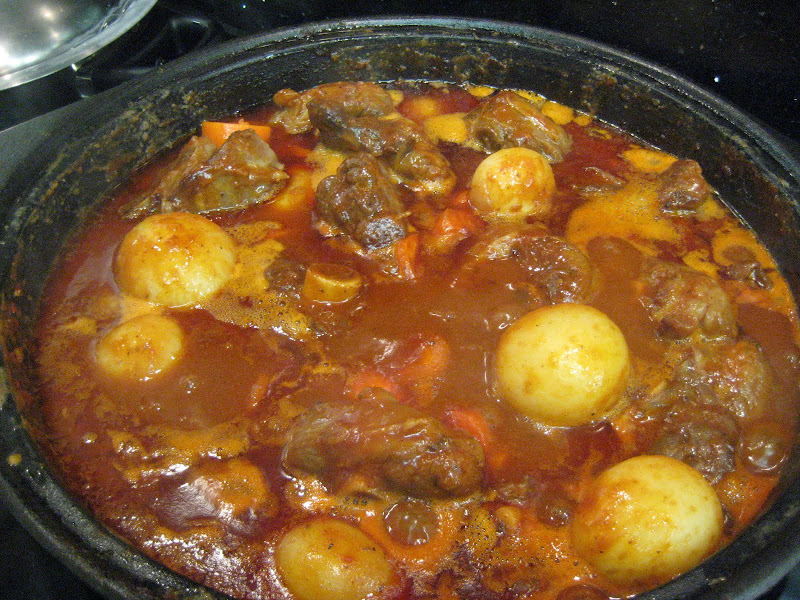 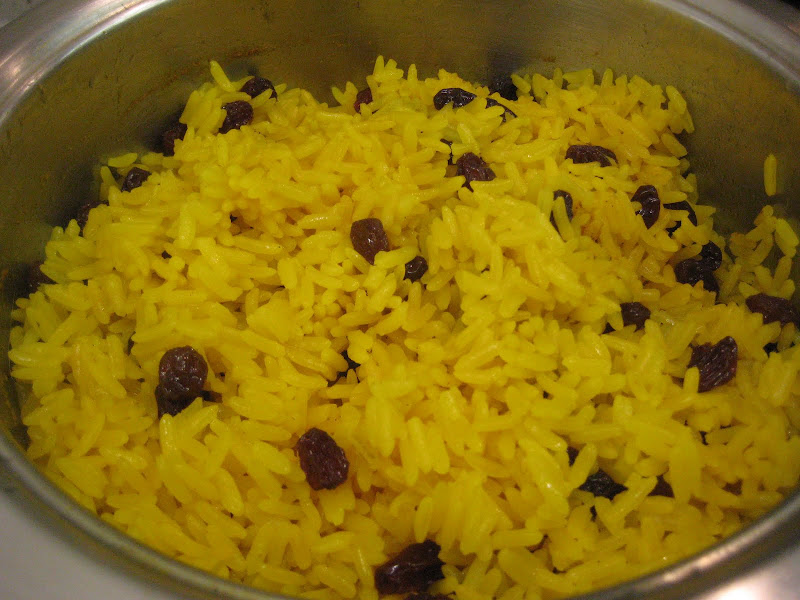 The yellow rice had a slight sweetness to it from the raisins, which balanced well with the heartier meat dishes.

On this dish we had mashed pumpkin – it was cooked low and slow with lots of buttery goodness! 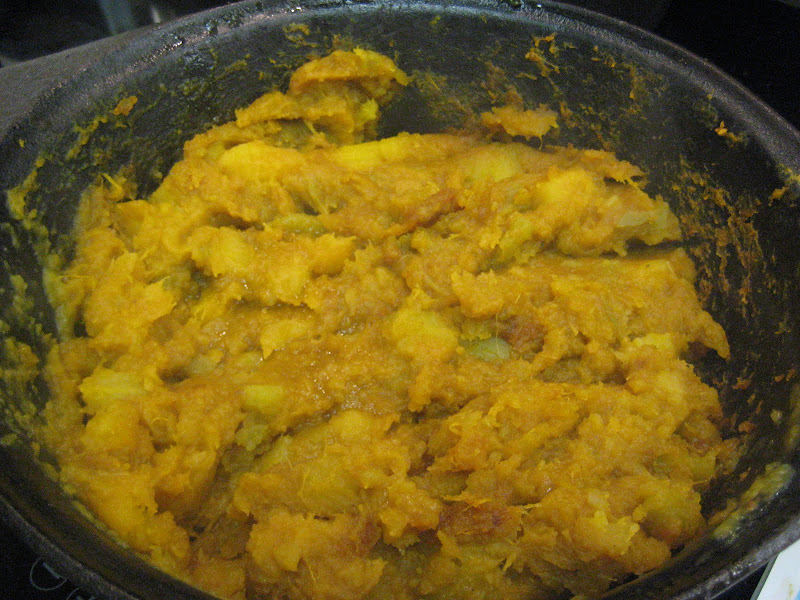 And green beans – just to make me feel a little healthier! 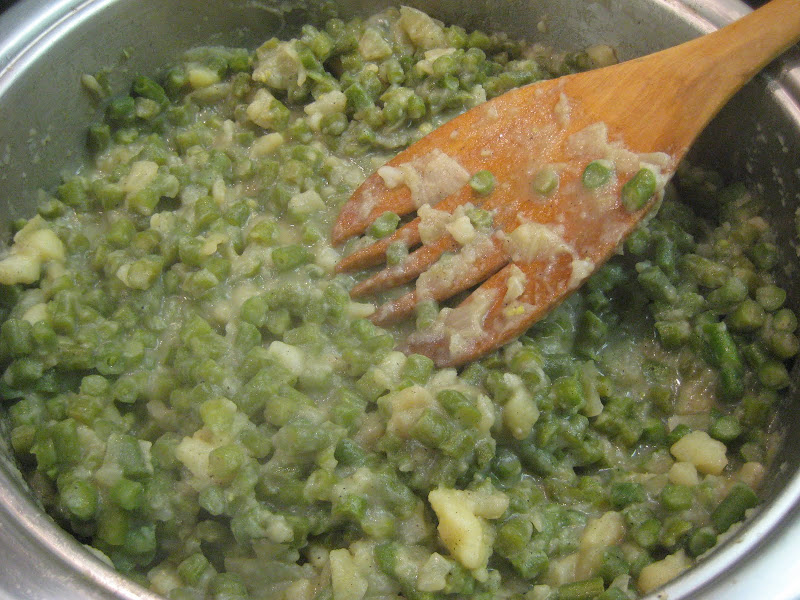 There were about 3 kinds of desserts too, but in my food-coma I forgot to take a pictures.

The next day, for Christmas Brunch, we ate even more! MVB’s family all gathered for a true Christmas feast. A few of my favorites from the meal:

Stuffed Duck Breast was so moist and the stuffing was juicy too! 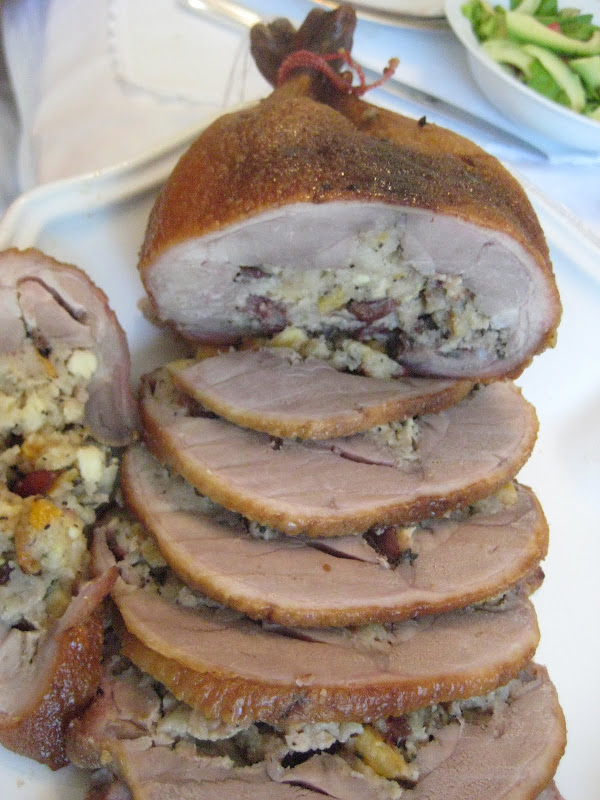 The lamb was finished on the grill and was perfectly medium rare. It was served with boiled potatoes and sauteed mushrooms. 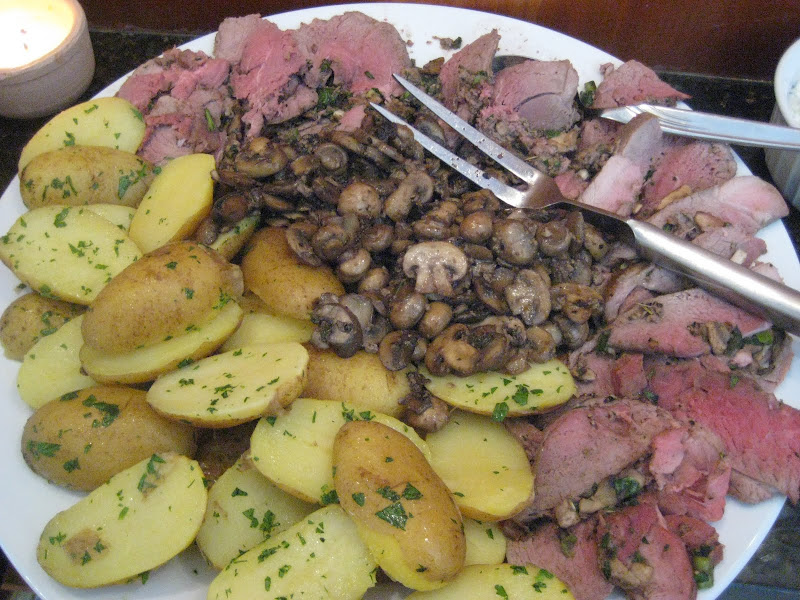 Here’s my plate of the first course salad, with shrimp and what I believe was smoked trout. 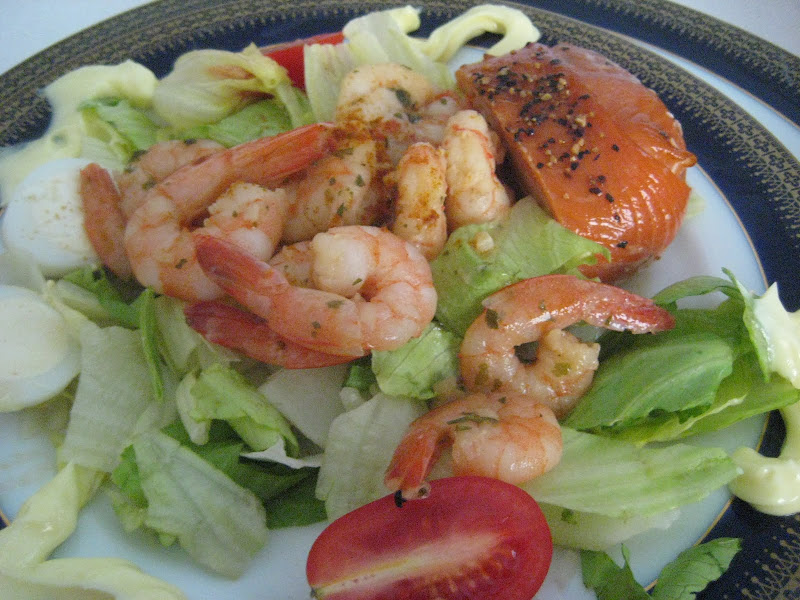 Followed by my main course with (starting at 6 o’clock, clockwise): Lamb with jus, slice of turducken, stuffed duck breast, roast beef, cous cous, roasted asparagus, leeks, mixed vegetables potatoes and mushrooms. All delicious and incredibly filling! Not that it stopped with from indulging in a few desserts! 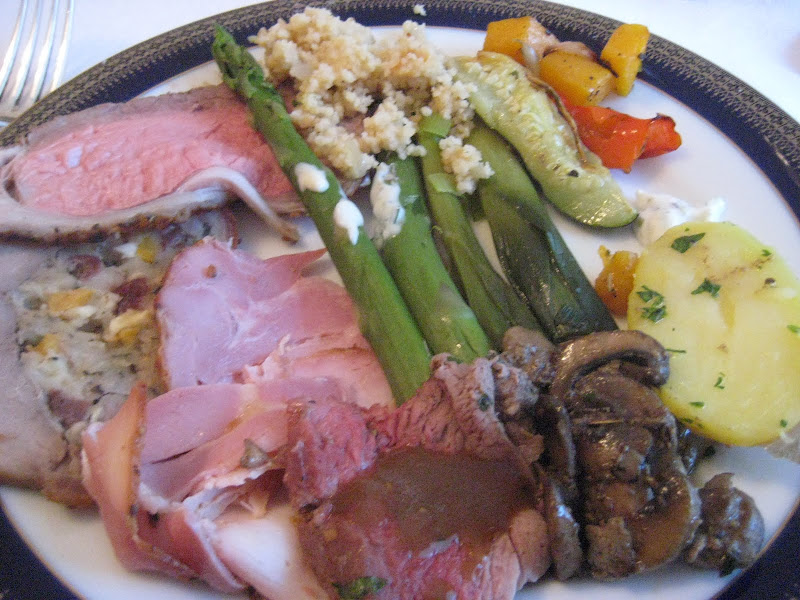 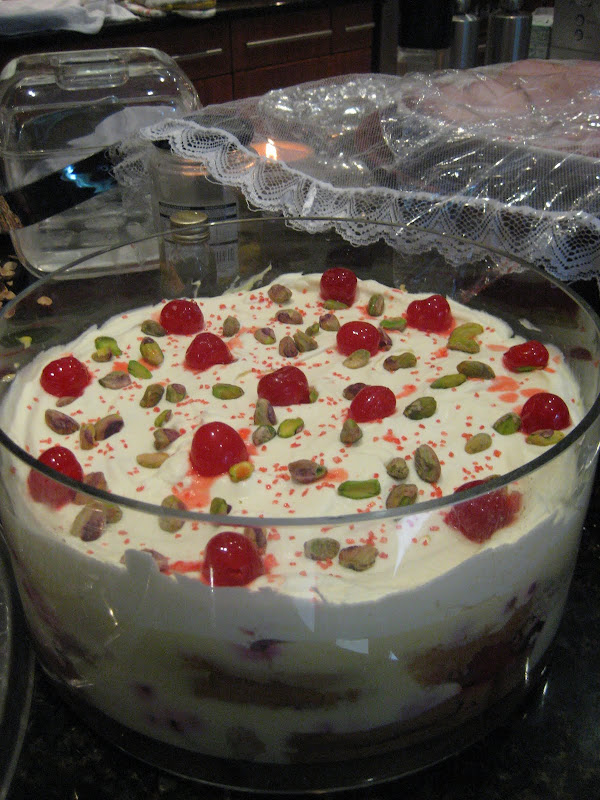 And a ginger pudding with custard. I really with custard was a more common dessert accompaniment here because it’s really great! 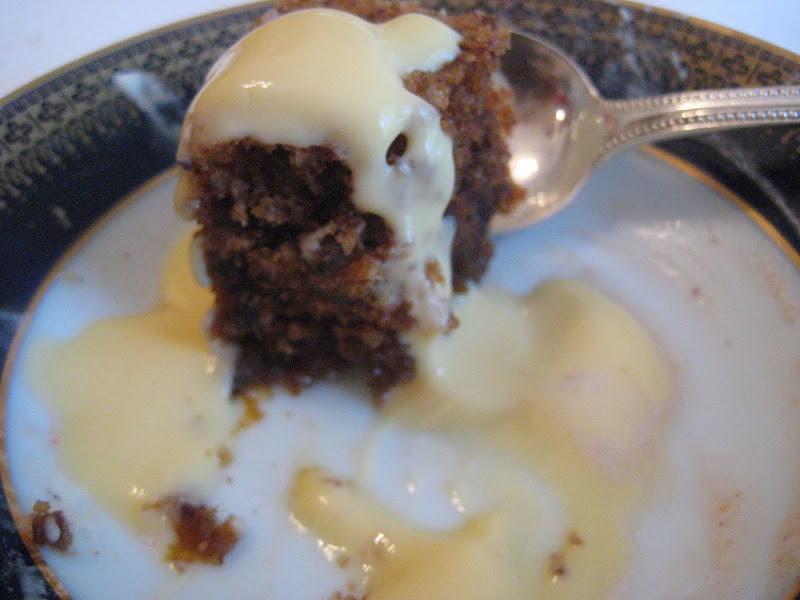 Lastly, on New Years Eve Papa-VB put together a huge Braai or South African BBQ. On their patio they had this nice BBQ pit where he cooked two kinds of chicken kebobs, wors (sausage), rolls and, afterwards, lamb chops! 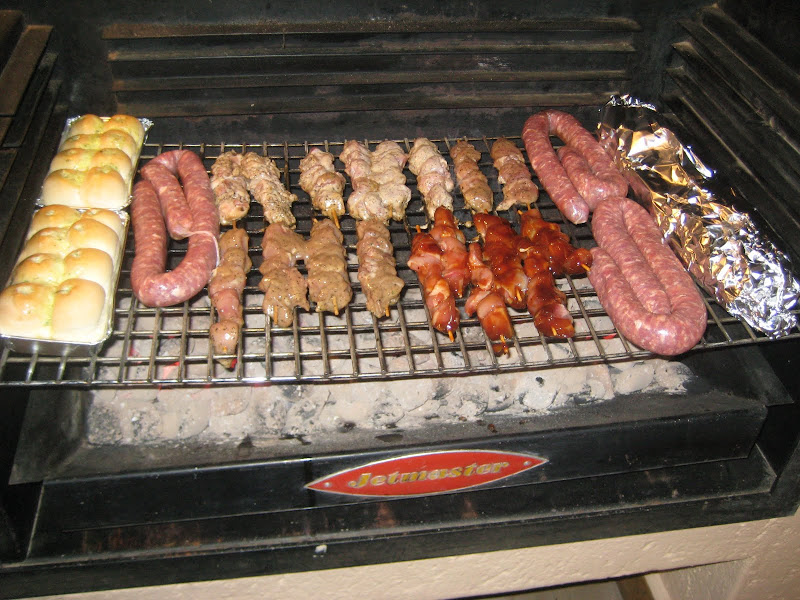 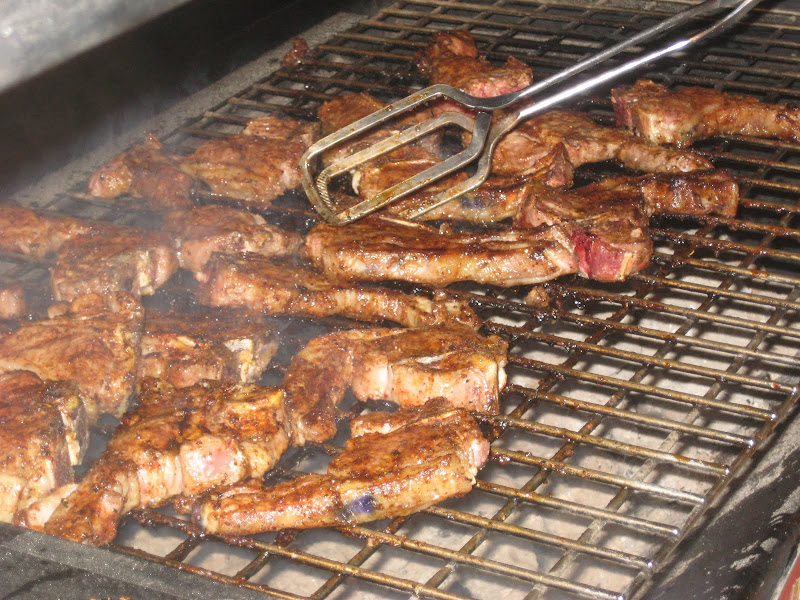 It was all so well spiced and addicting. Unfortunately, I was feeling so well that night but it didn’t stop me from eating a big plate of deliciousness! 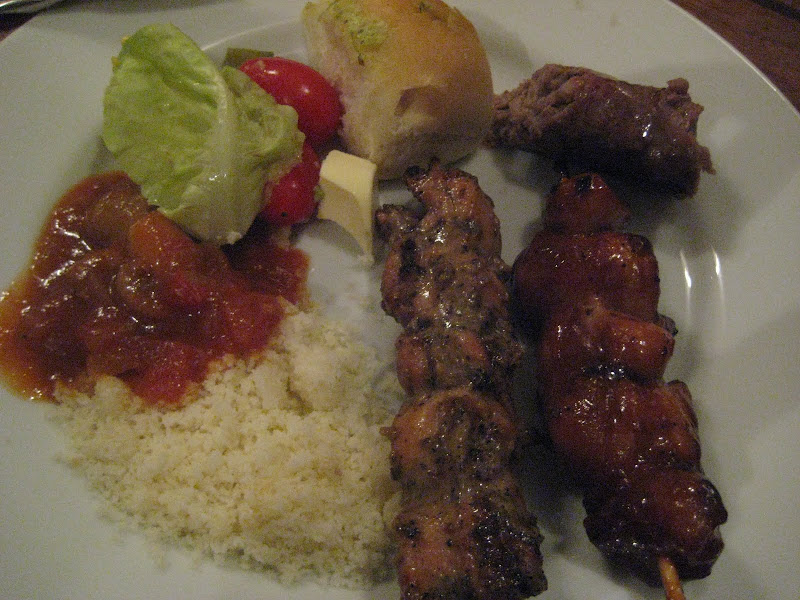 On the side of all the meats, there was cous-cous like grain called Pap, and a spiced tomato stew, Chakalaka. It was a nice balance to all the meat.

Overall, I think it’s safe to say that I ate very very well while I was there. All the food was so delicious, and having it cooked at home the traditional way just made it that much better. A big humongous thanks goes out to MVB and her family for not only taking us into their home but also providing all these amazing meals. I truly recommend trying these traditional South African dishes should you ever come across them. Although I don’t usually pick favorites (or maybe I do…), the Bobotie is one dish I could definitely eat every week – SO GOOD!!