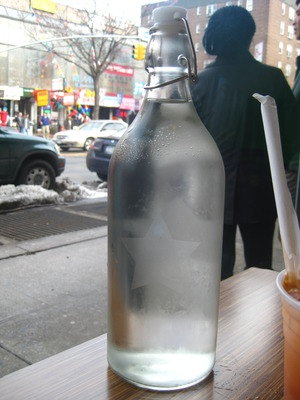 One recent day after a quick jaunt with a friend through my local Asian supermarket, I realized I was starving, and decided we should head over to nearby Boon Chu – bypassing both Pho Bang and High Pearl, two of my favorite area restaurants.  I’ve visited and posted about Boon Chu twice before, but always find myself at Pho Bang or High Pearl; I forget that Boon Chu is just another block away.  Oops!

Bottle of water given to us so we could drink as much water as we wanted – nice touch, as in my first review from just over 2 years ago, I noted that my water glass remained empty the whole time. 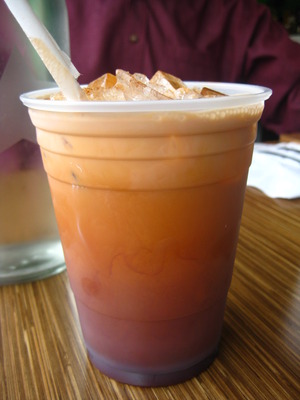 I don’t know if Thai iced tea is something that’s actually from Thailand, but I always order it.  This was satisfying, not too sweet. 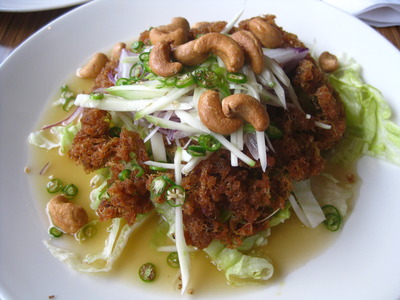 When I saw crispy catfish salad on the menu, I knew I wanted to try it.  I’d had this at Sripraphai a few times and enjoyed it quite a lot, and hoped that it would be similar here, maybe even better.  Cutely, the woman who took our order – who I think was also an owner or chef there – asked if we’d ever had it before, and that it isn’t catfish salad the way we might think.  She mentioned that other people have ordered it and then been all confused. 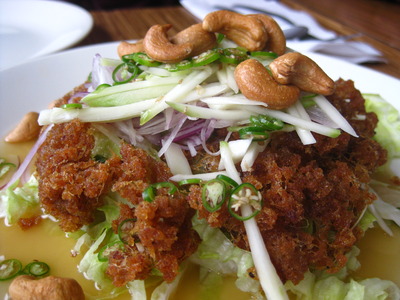 The first time I had this dish at Sripraphai, I admit, I was all, where’s the catfish?  I don’t know how it’s done, but the catfish is the crispy part – it’s super crispy, almost like deep fried shredded bits, and very tasty.  I managed to push away most of the bird chilis to eat the salad, which was crisp, refreshing, and very sour if you allowed yourself a little too much of the vinegar dressing.  But the perfect bite: a cashew, julienned cucumbers, red onion, a bit of lettuce, crispy catfish shreds… well, that’s just a mouthful of joy.  Yum. 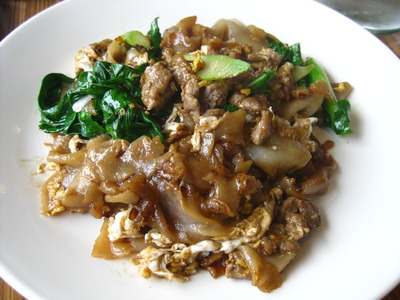 A visit long ago with Snorlax had included sitting next to a man who came in, ordered this dish, then proceeded to all but lick the plate clean.  I recall saying that I’d have to order this next time, because the man wolfed down his food so happily, it must be good.  And it was exactly what I wanted- smooth noodles, slick with savory gravy; chunks of tender beef; a bit of veggie and a bit of egg.  Very satisfying on this cold day. 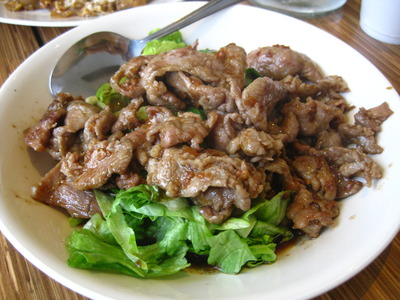 Pork with garlic.  Lots and lots of garlic.  I thought this was very savory and quite tasty, though my friend told me it tasted like burnt garlic, too smoky.  Ah well – more for me.  I don’t know that I’d order this again, but mixed with the big bowl of small rice grains brought to our table, not bad.  Oh – I didn’t take a picture of the bowl of rice, nor the big cup of vinegar filled with diced bird chilis floating on top… which my friend proceeded to devour.  Eek. 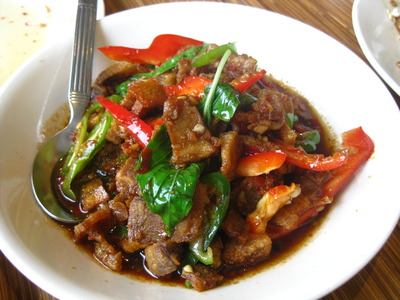 The next dish was chosen by my friend; pad krapow I believe or pork in chili sauce.  I only tried a few pieces before I concentrated on the two noodle dishes, because it was clearly fairly spicy and bright red, and I didn’t want to risk burning my tongue off such that I’d be unable to taste further goodies.  My friend definitely enjoyed it, finishing off the entire plate practically alone save the few pieces I ate… 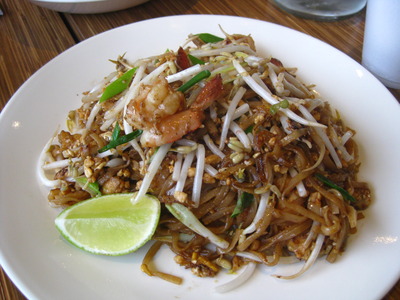 Though some may mock, I like ordering pad thai at Thai restaurants, at least the first time I visit, to test it against all other Thai restaurants.  I’ve been here a handful of times and really enjoy their pad thai, so I had to order it again.  (And I don’t like the chicken version- don’t ask me why, I just don’t like the chicken that usually comes in pad thai, so even though I don’t care for shrimp, I vastly prefer it to chicken in this dish.) 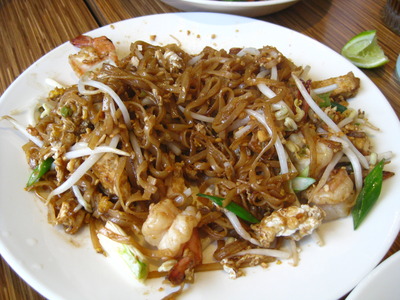 Squirt of lime all over the noodles, then toss them around to distribute the acidity.  I love how an excellent pad thai is a balance of all flavors – slightly sour from the lime juice, slightly sweet from the ‘gravy’ in the noodles, slightly salty from the same gravy.  The bean sprouts bring refreshing crunches to each bite, while the noodles are soft, yielding a nice chew, and the bits of egg and tofu scattered about lend a meaty quality to the dish overall.  Boon Chu definitely has one of the best pad thais I’ve ever sampled, with its precarious balance just right.  Sometimes I tip the scales and add more lime, but that’s personal preference, of course.  Yum!

Yvo says: As good as it was the very first time I went, I really enjoy going to Boon Chu and trying different items from the fairly extensive menu.  I have to remind myself to consider them more often than in the past – I do always find myself at Pho Bang or High Pearl instead, even though Boon Chu is only another few blocks away and really boasts some excellent food (though a very tiny dining area) with very reasonable prices.
highly recommended