Ever since Yvo went on her hand-pulled noodle kick last winter, I have been itching to go. I got my first taste a couple months back during the Flushing Food Tour and was looking to check out Chinatown with Yvo to find these hidden gems. After reading Yvo’s posts, these restaurants are not for tourists and you have to keep a keen eye out in order to find them as the streets down there are a little hard to navigate.

Since winter has come early to NYC this year, Yvo and I picked a random Friday to get some noodles to warm us up. Beer Boor & TC came along too. Little did I know that Yvo expected to hit up 5 different places in one night, more on that later. 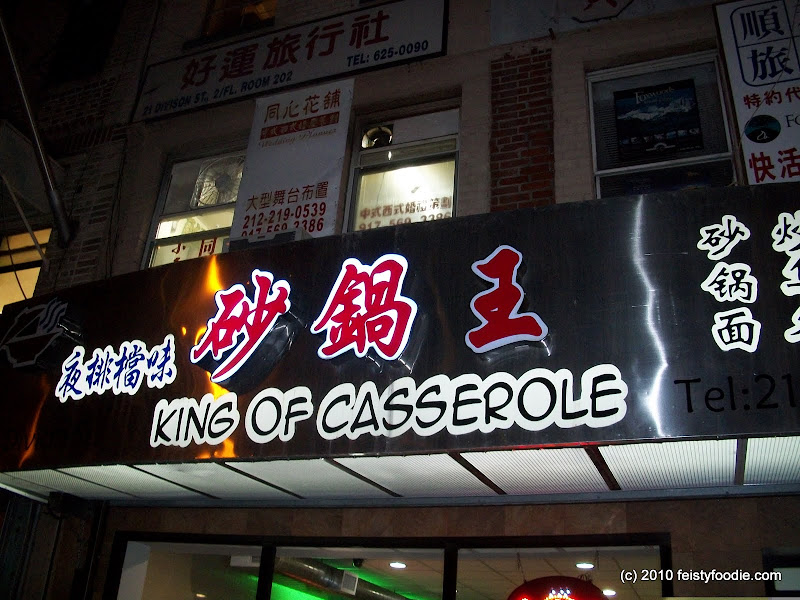 Our first stop was Lan Zhou on Division. We walked up and found that the restaurant is now called King of Casserole. Apparently, name changing is not uncommon in Chinatown, but usually it is the same food and staff. This was the case as Yvo recognized the waitress from last time. Yvo’s idea was that at each place, we would get an order of fried dumplings for the four of us to share, then she and Beer Boor would share an order of noodles, while TC & I were on our own with orders for each of us. Once I learned this, I admittedly was a little scared and not in true FBM form.

Yvo says: In my defense, I just thought it would be easier and would have split orders with anyone! But TC can certainly handle his own, so I didn’t think twice about it. Plus, Beer Boor lets me order whatever I want… 😛
Also, let the record show I chose this place as our first stop as my one and only visit a year prior, it was sufficiently tasty, and honestly – location-wise – it’s the closest to the train and the cleanest place I knew we’d visit. Kind of easing the non-Asians into the scary part of Chinatown, y’know?

Beer Boor says: Let it be known I was not aware I’d be the only male splitting orders. I remedied this at the second stop so as to preserve my man card.

Here is the order of fried dumplings. Apparently, most places in Chinatown only state that they served boiled dumplings, but if you speak Chinese you can ask them nicely to fry them up. These dumplings were ok. I believe they were filled with pork & chives. None of the dumplings we got that night really wowed me, but they were CHEAP! I believe $3 or $4 for an order of 12. 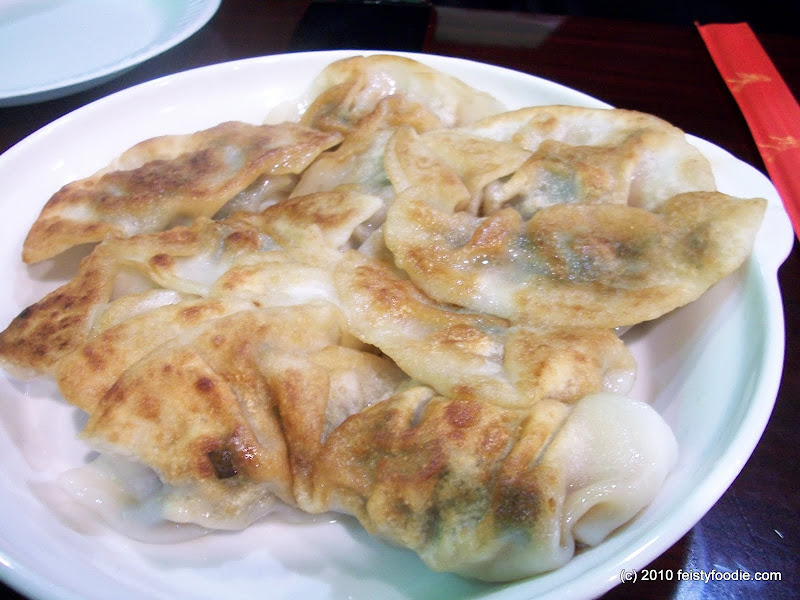 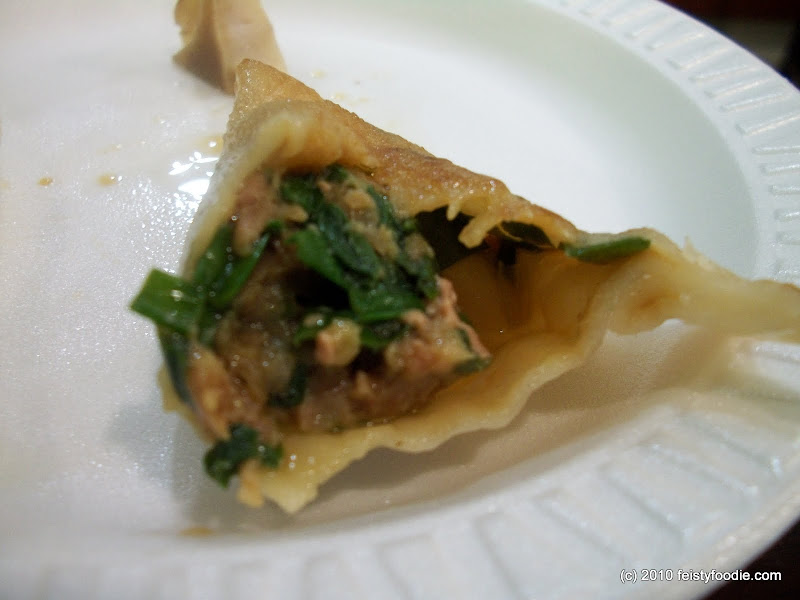 Yvo says: I was not happy with these fried dumplings. Meh-tastic. Horribly fried.

TC got the beef brisket with his noodles. I think he was happy with it as he left an empty bowl except for some of the mediocre broth. 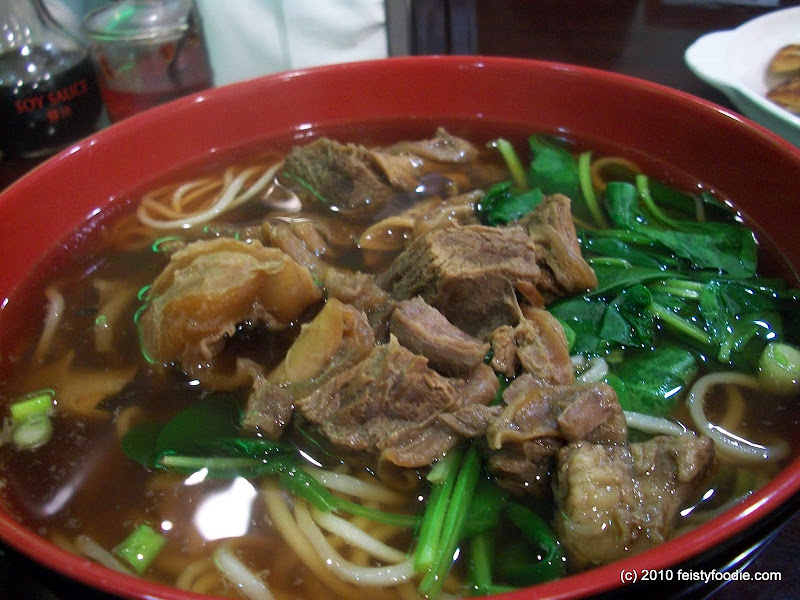 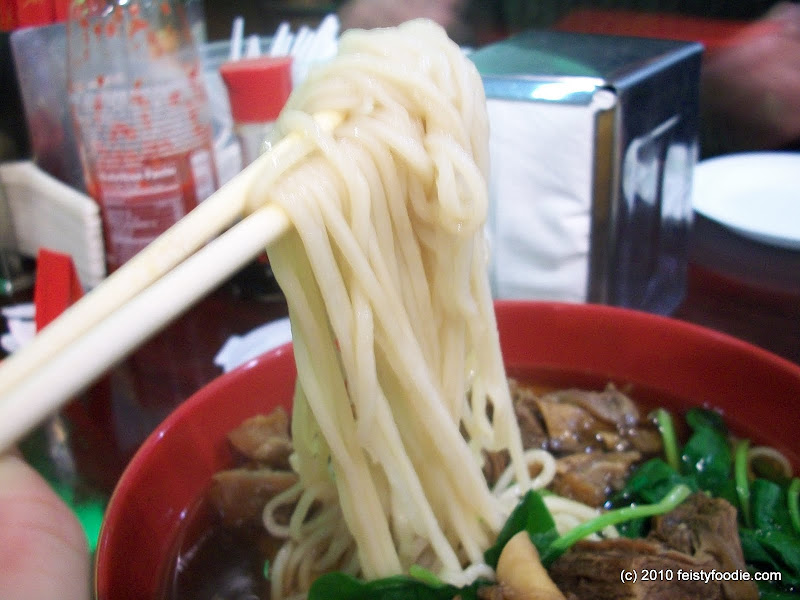 I decided to try the Ox Tail. What can I say? I have become a pretty adventurous eater. It wasn’t the easiest thing to eat with the equal parts meat, fat, and bone. The noodles were very floury at first bite, but got much better as they soaked up the broth. I liked the super fresh spinach that was also in the soup, which was the healthiest thing I ate all night. 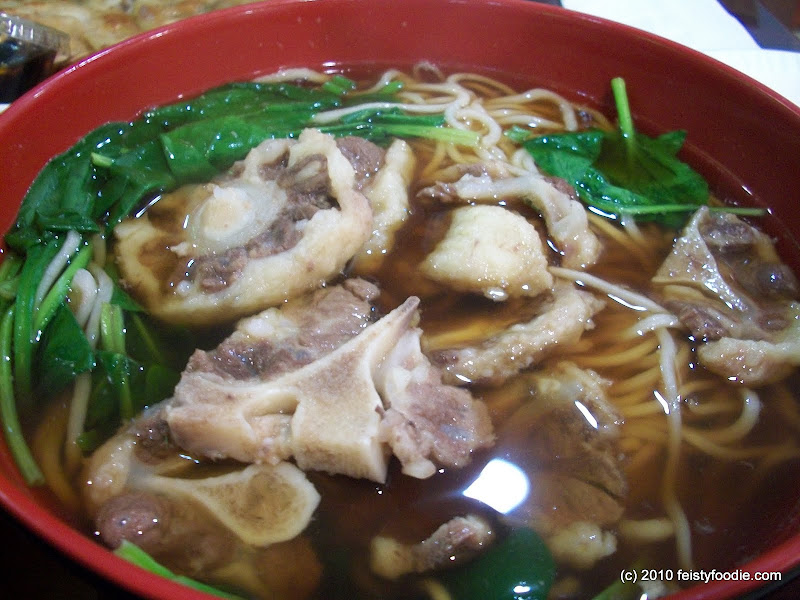 Yvo & Beer Boor decided that they would do a fish ball taste off at each restaurant. I had a bite and it was good with a nice amount of chew. I’ll let them tell you more about it. 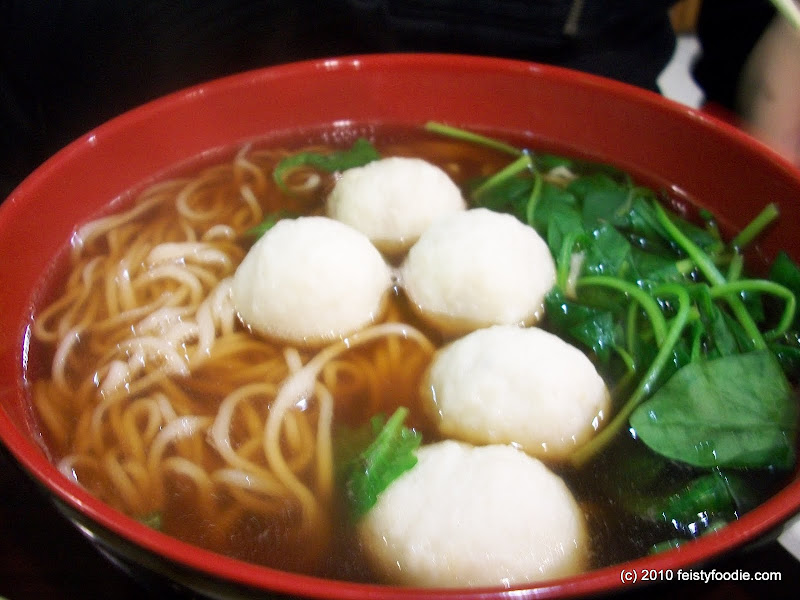 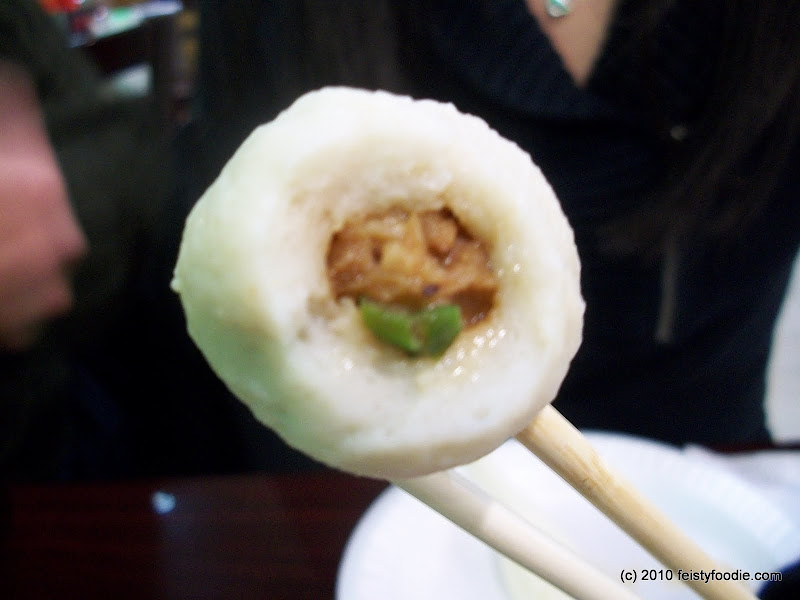 Yvo says: Yeah, I’ve mentioned how much I like pork-stuffed-fish balls – come on, what’s not to like?! – and I decided this time that I really had to get my move on and test out these places, compare them! These were good, chewy, good bounce to the fish ball, a bit of flavor to the pork, but not the best that night by far. The noodles were OK, the broth weak.

Beer Boor says: these were a decent introduction to fish ball noodle soup for me. The texture struck me as oddly spongy yet dense, and they retained a bit more fishiness than I wanted. The pork inside was fairly bland, as Yvo noted.

I also got a cold mango green tea to drink, while the others got hot tea. It was good, but I think there was something not quite right with it as it led to an early exit for me. 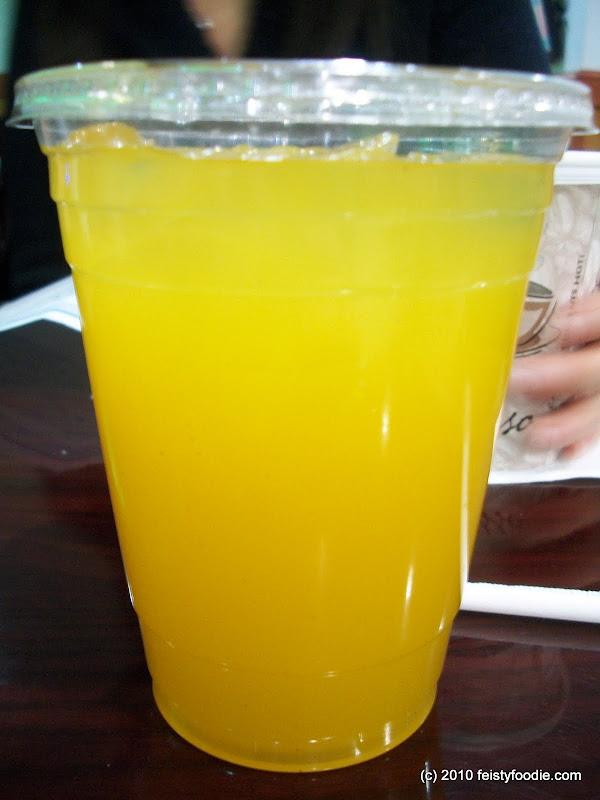 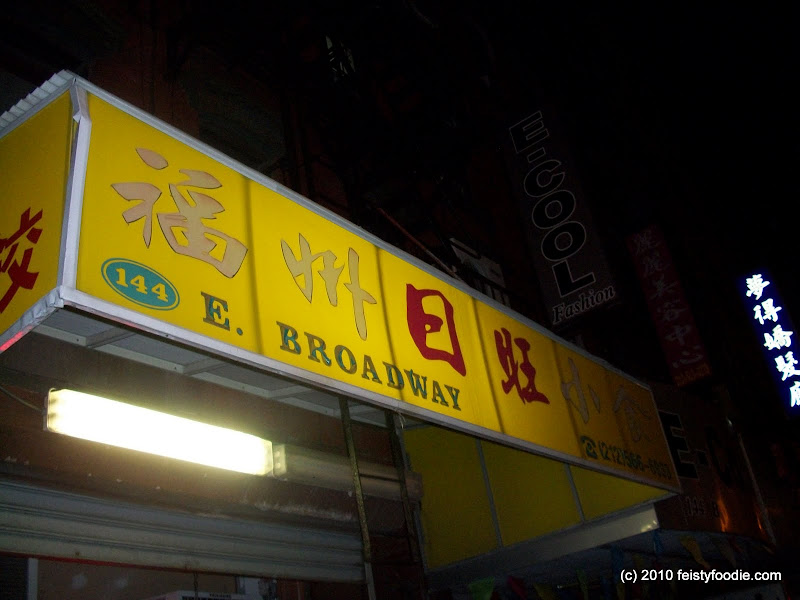 Next up was another place called Lan Zhou, which happens to be Yvo’s favorite. Although it was the grimiest of all the restaurants we visited, it was good. We could even see the Chef pull the noodles, while the other places had the chefs hidden back in the kitchen. This Chef was nice enough to let me take a couple pictures doing what he does best. I think it would be a lot of fun to take a class to learn how to pull noodles. I bet there is somewhere in Chinatown that does it. 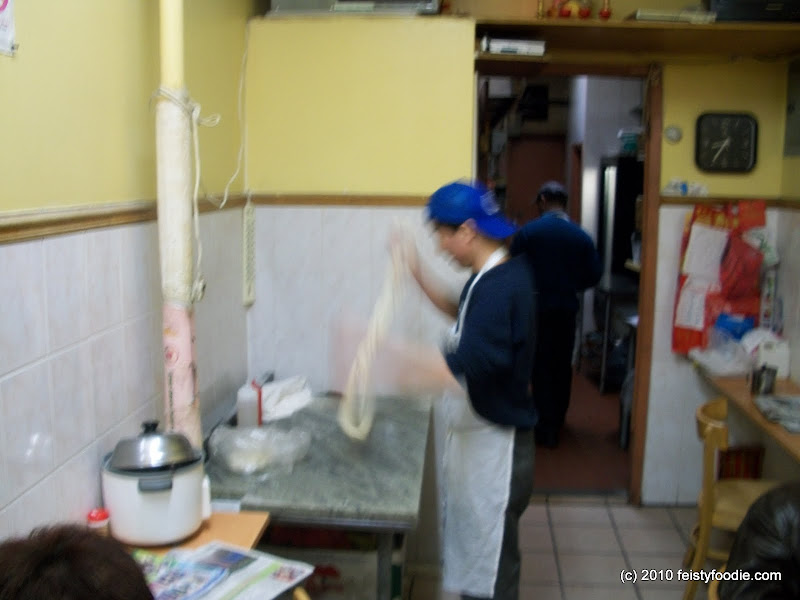 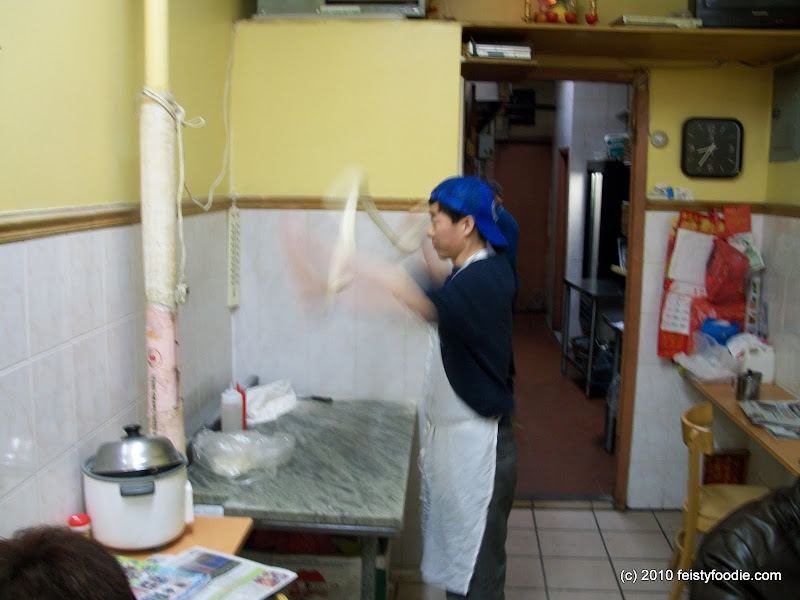 Here are the dumplings. 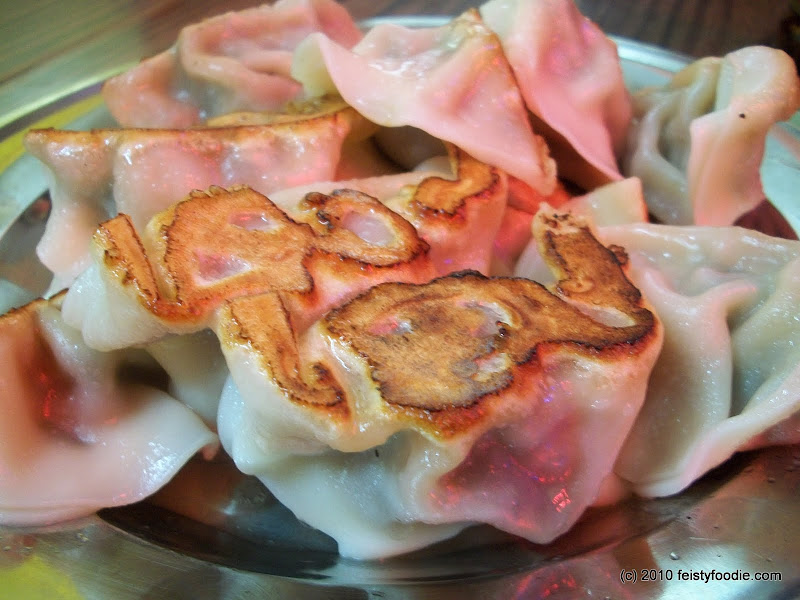 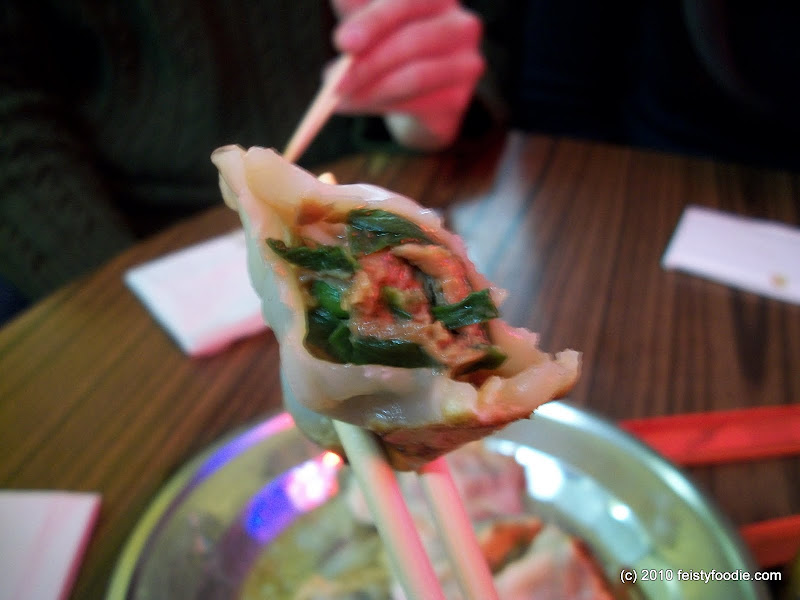 Beer Boor decided to get his own bowl this time around and got the Fried Pork Chop along with TC. The chop was very suspect as it looked like a soft-shell crab. They seemed to like it well enough though. 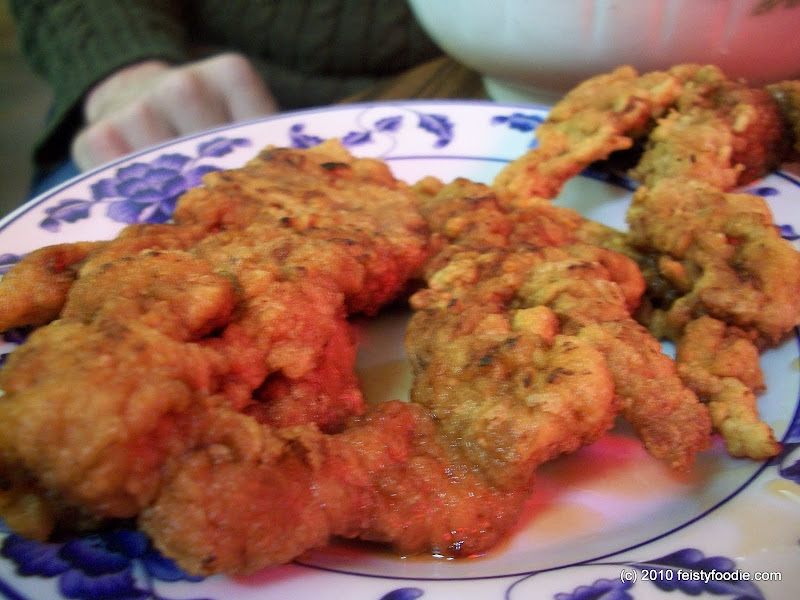 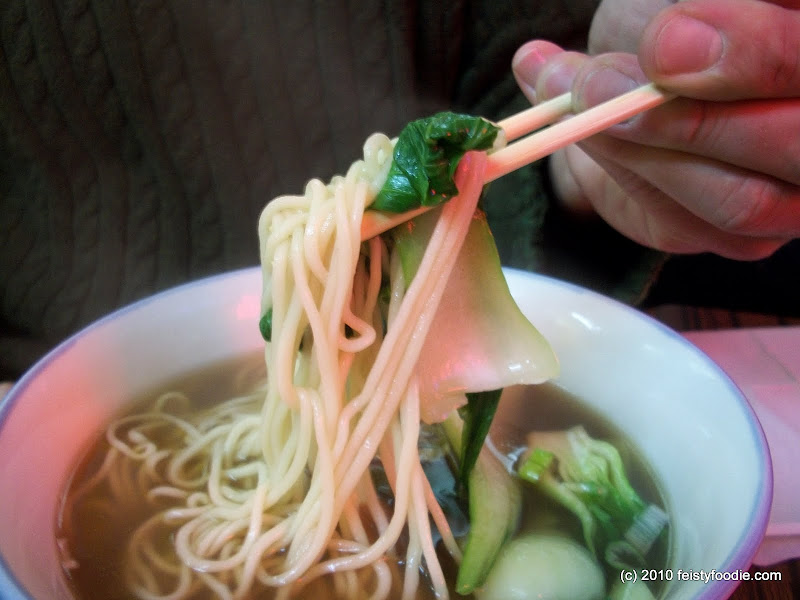 Beer Boor says: The pork reminded me of Chicken Fried Steak, version Pork. Not the best pork, but the coating was salty goodness (probably MSGed to boot) and the meat, soaked in the broth and chili-oil spiced — I added this from the pot on the table — was very easy to eat. The noodles were cooked more appropriately in this bowl, though I did appreciate how they softened as they continued to cook in the fairly meaty broth.

Yvo got her fish balls, which were quite larger this time around. 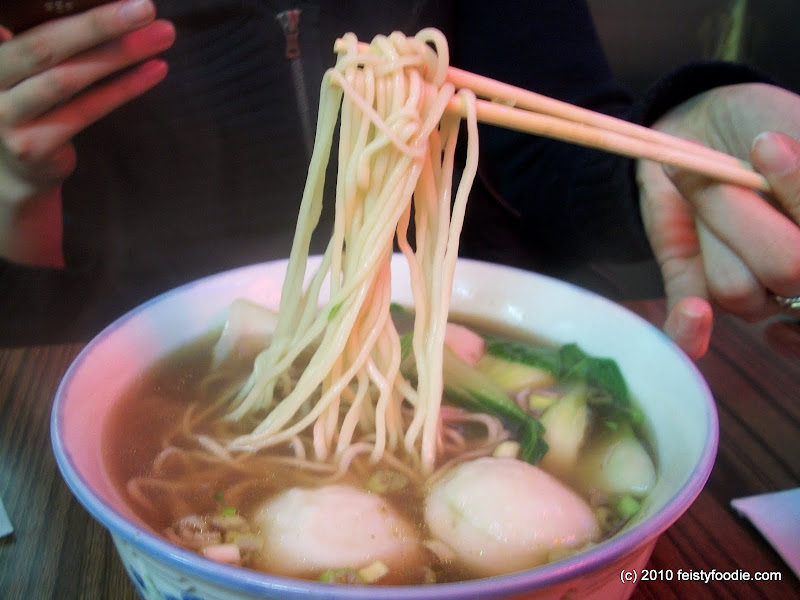 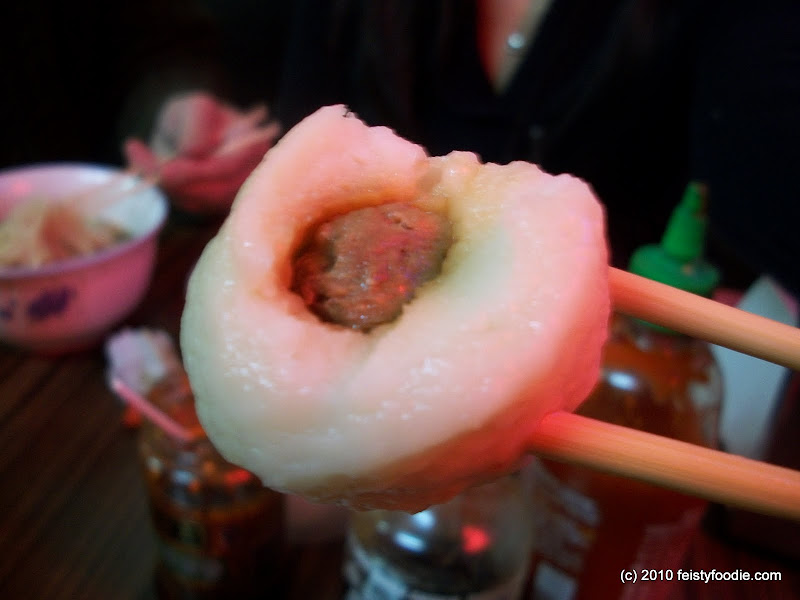 Yvo says: Fish balls get really big when you overcook them. I learned this from hot pot, when I throw my fish/squid/meat/cuttlefish balls into the pot at the beginning and let them sit for a long time, they bloat up. It doesn’t really change too much about the texture but they get a lil chewier. The fish balls were fine, but the inside pork bit was only alright. The noodles here, however, were much better in terms of texture and taste, and the broth also won out easily over the previous place. However, the biggest detractor here for me was… the stupid plastic spoons. The other two places had the “Chinese soup spoons (plastic)” but this place had the regular plastic soup spoons which make drinking the broth really difficult. Oh, and the dumplings! I like these fried here a lot. Juicy, succulent, and very tasty.

Since I started to feel a few unwelcome grumbles, I played it safe with the beef brisket. It was super beefy and really good. I wish I had a bowl of it right now as I fighting a cold as I type. The bok choy was a nice addition. The noodles themselves were very good from the first bite. 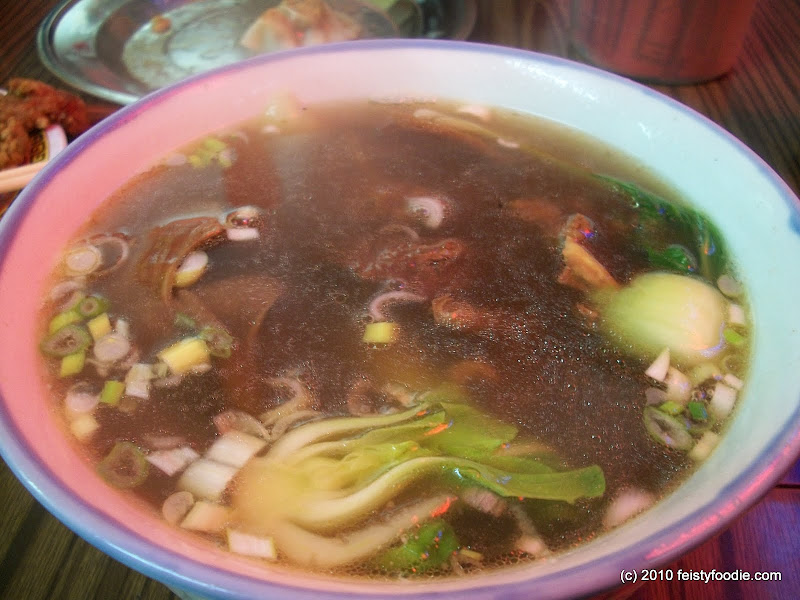 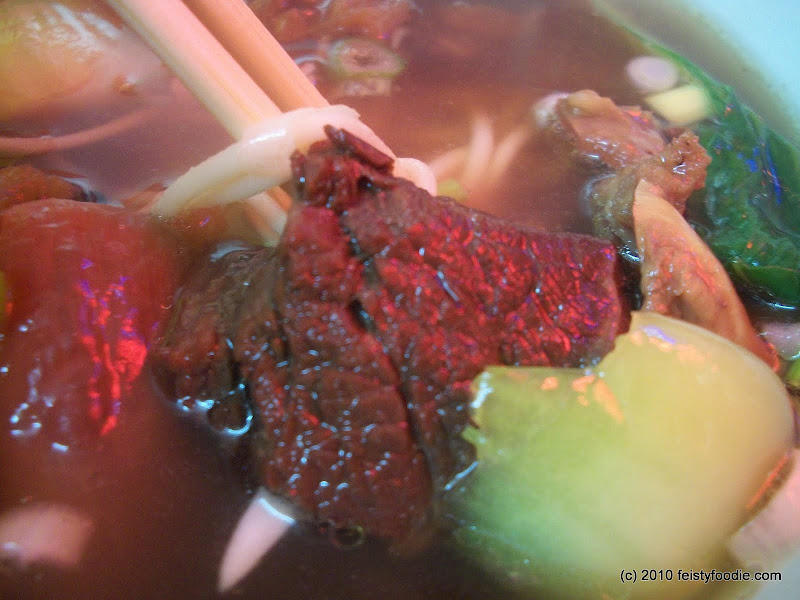 Notice anything in this pic? 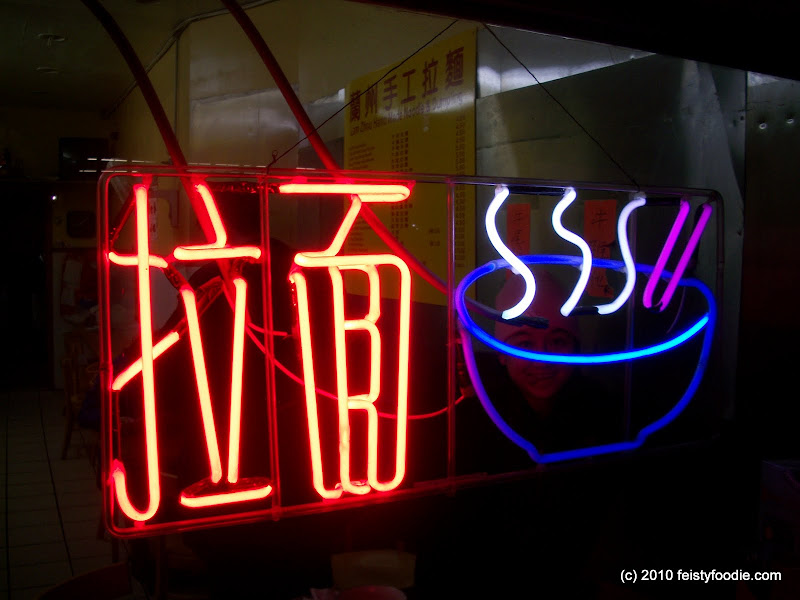 The next place on the list was Kuai An La Mian Hand Pulled Noodle. Unfortunately, it was closed by the time we got there. 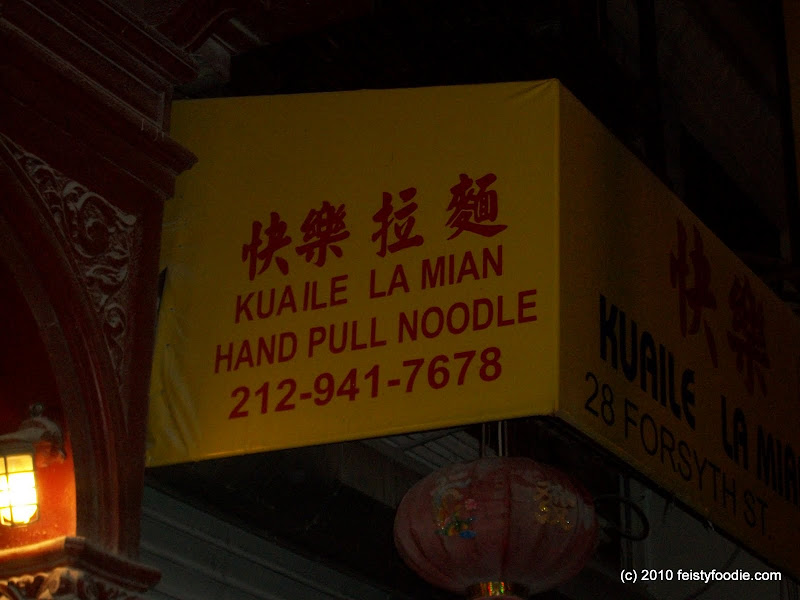 Yvo says: I was really disappointed because they have this incredible roasted chili oil that I really like, and knew the guys would all really enjoy as well.

Next was Sheng Wang, but I’ll have to turn this over to Yvo and Beer Boor for the review as I ducked out by then. 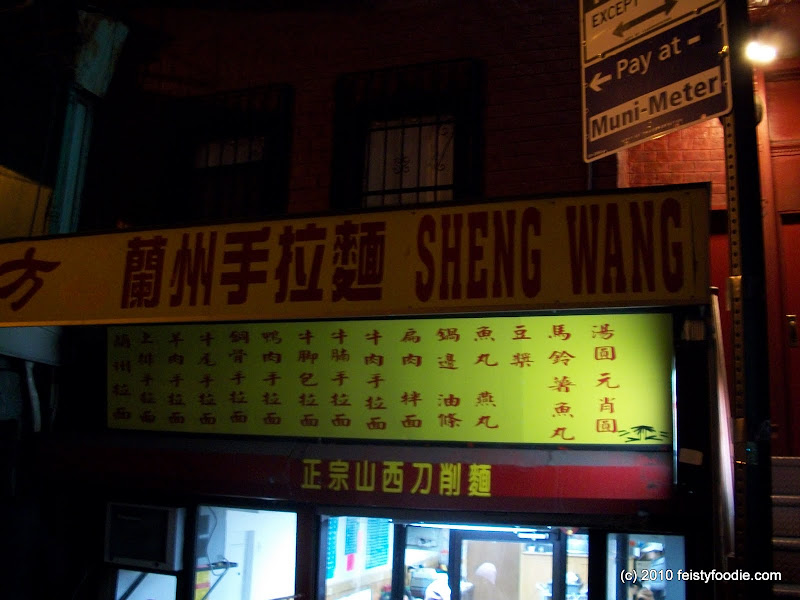 Yvo says: This was one of the first places that put the hand pulled trend on the map, if I recall correctly. The first time I went,I had a ton of trouble finding the damn place (although Kuai An Lai Mian was way worse, involving me wandering around under a bridge in Chinatown in the dark, crying and texting, calling people to ask them to find me on Google Maps and direct me where to go…), but when I did, I traipsed down the short flight of stairs and was on my way.
One of the first things I noticed was they were making pork-stuffed fishballs in the back, fresh. A HUGE tub of the fish goo. Awesome. 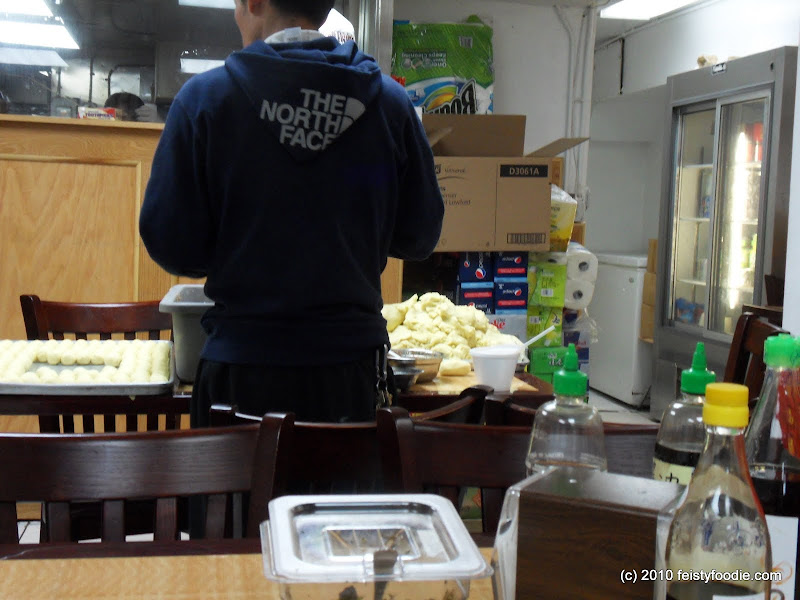 And after we’d received our orders, it became clear that they must take a lot of pride in their pork-stuffed fishballs, as they put one in every bowl, regardless of what you ordered. They SHOULD take a lot of pride in them- they are juicy, with the pork’s juices leaching into the fishball surrounding it, creating this amazing… yumm… I even bought a bag to take home, I think it was $5 for 22? So good. Unfortunately, the noodles themselves were AWFUL, a huge turnaround from last time. They were gummy, floury, tasted uncooked, and basically fell right apart as I bit into them. I didn’t even finish my bowl, so grossed out with the noodles I was (though I ate all the fish balls!). The dumplings were okay, nothing to write home about. 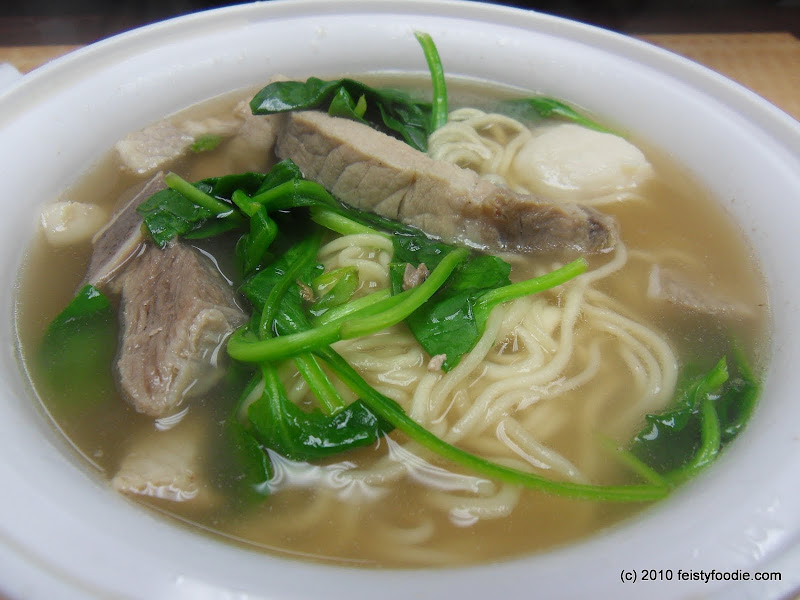 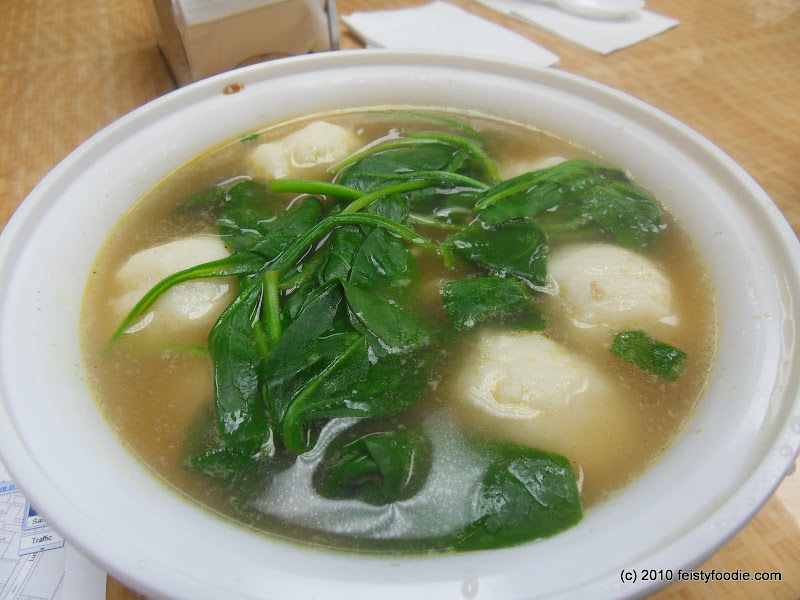 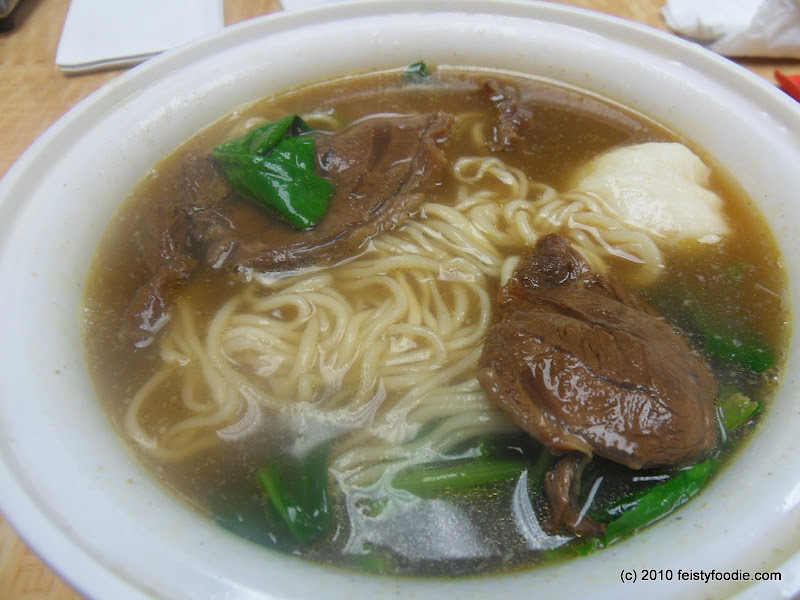 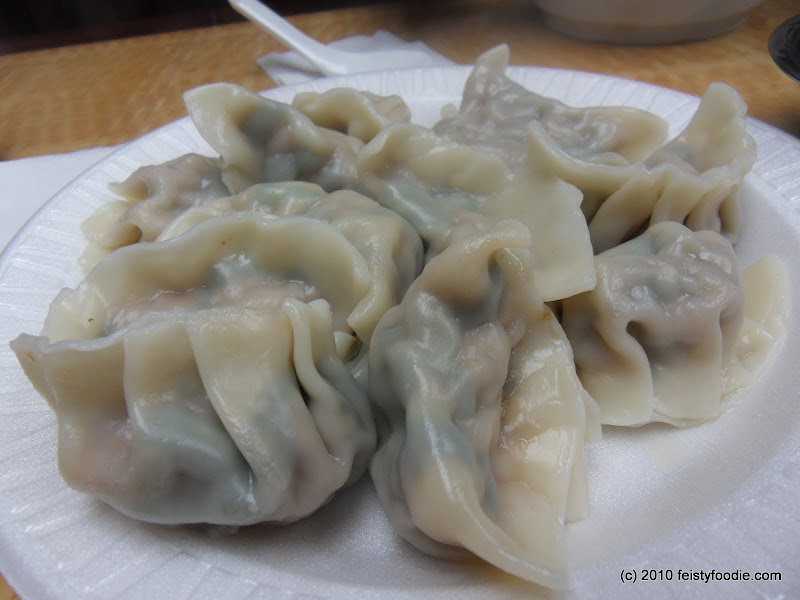 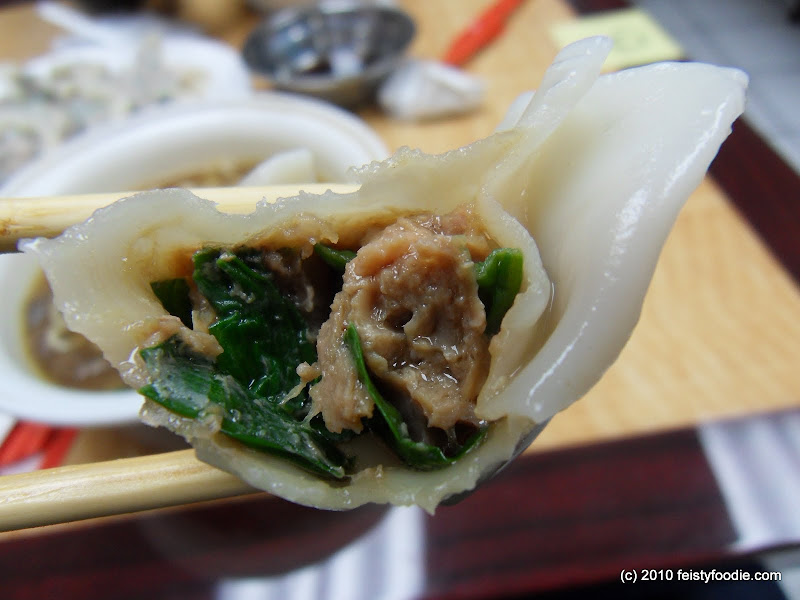 After that, since I was too full to eat more, we skipped Super Taste, across the street. However, we will be going back soon to eat at Super Taste and Kuai An Lai Mian… can’t wait! The cold weather is perfect for it!