For a recent Midtown Lunch Happy Hour, I chose Loreley as our venue because SpB had whispered in my ear… “meatballs. frites. same basket. wtf. wtf. wtf. MEATBALLS AND FRITES IN A BASKET” – this sounded ridiculously appealing to me – hello!? – so I quickly made plans to drag my HH lush friends.  Plus, I’d been to Loreley years ago and enjoyed the quirky atmosphere; a German biergarten right outside Chinatown?  Sold.

It wasn’t that difficult to convince everyone of the greatness, either; as with any biergarten, the beer selection was pretty decent (though I’m sure Beer Boor will speak up and confirm or deny this, as I, um, stuck to drinking hard cider or something along those lines…).

When I arrived, everyone was enjoying large steins of beer, though I didn’t bother to ask what they were drinking.  TT was sitting next to me, and we began discussing the merits of ordering food.  “Meatballs and frites,” I said.  He responded, “No meatballs.  Meatball’d out.  No meatballs!” 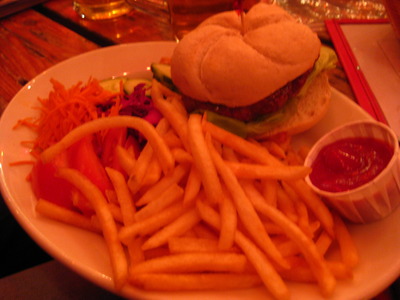 So he ordered a burger.  He said it was good, but not life changing.

Hungry also ordered a platter of some sort, while CheeeEEEeeese ordered soup.  I didn’t take pictures nor did I happen to hear how they liked them (they were sitting at the other end of one of the long picnic tables in the outdoor back patio area), so hopefully they will speak up and share their opinions… 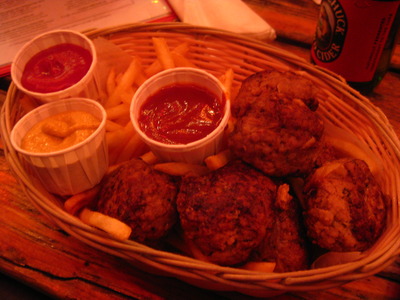 Meanwhile, Nommables’ Dean and I both went straight for what we’d come for: meatballs and frites.

When the basket arrived, I was pretty surprised by how many meatballs there were – 8, I think.  I’d expected a low number – 3-5, perhaps, just tossed in with my frites.  Plus, these were pretty huge! like small hamburgers that hadn’t been flattened (pre-cooking, I don’t press on my burgers once they’re on the grill, I’m not crazy).

What really struck me immediately as I placed a ball in my mouth was how soft they were.  I knew they were pork from the menu, but just how succulently soft each piece was; it was along the lines of biting into a meat cloud, a burst of meat juice released into your mouth along with the lovely flavor of happiness.  Provided with each basket were small cups of ketchup, mustard and curry ketchup; but the surprise win was definitely the curry ketchup – a slight kick of curry in there, the smell of curry, and just yum.  The frites were pretty tasty too – properly fried, crispy, and great to munch on while chatting with everyone; since the portion was so generous, it was easy to share as well.

Yvo says: Well, that was a win.  My cider was $5, and for $10, that ginormous basket of meatballs and frites was an excellent value that totally stuffed me.  I’d say it stuffed me for the night, but I’ll be honest: directly afterwards, we headed over to Quickly Shabu Shabu because I wanted hot pot.  Mostly cuz I’m a pig, though, not because I wasn’t full already.  With a pretty extensive menu for a biergarten, I can’t imagine why I wouldn’t return to Loreley sooner than later… mmm!
recommended

« Maya: A Toast to Mexico
Tuesdays with TT: Indian Brunch »