I didn’t take a picture of the outside, and I don’t know that I’ll be trying to send y’all to this place anyway.  Mine.  Go away.  Well, no, also because it’s far from any public transportation, and when you see what I ate… well… yeah.

Headed over to spend time with my family recently, and I was greeted with “We’re going to Old Country Buffet, yee-yee!” when I walked in the door.  Ok, off we go in the car – I don’t even know how to get there, to be honest – and arrived at a ridiculous line.  But we waited, and eventually we were seated…  at a southern food buffet.  Guys, did you read that?  SOUTHERN FOOD.  ALL YOU CAN EAT. 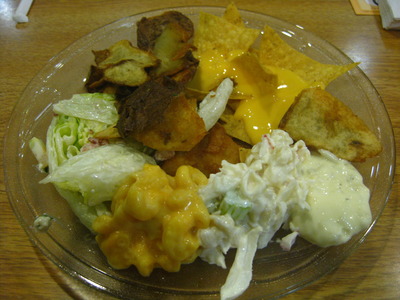 My first plate basically said “get what you like, because you know what you’ll be eating next!” so I got my standards of “whatever strikes your fancy” – some salad just because, some seafood salad even more just because, mac&cheese, fried pieces of fish, fried potato slices, tartar sauce, and of course… tortilla chips with liquid cheese.  Liquid cheese, you complete me… and fill in my arteries with your gooey goodness.  So far: the fish wasn’t that good.  The mac&cheese was pretty good.  And the chips were as expected.  I’m not going to talk about the other stuff.  Ugh. 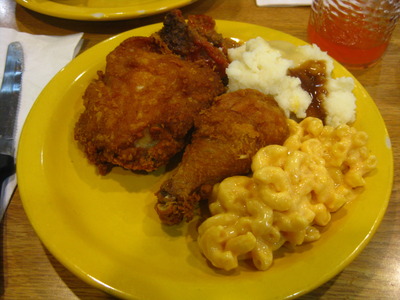 My next plate was the star of the show, the fried chicken: a thigh and a drumstick, and some mashed potatoes with both kinds of gravy – country and regular brown.  I like country gravy.  The brown was too salty and too… heavy.  Obviously I liked the mac&cheese as I got more.  And the chicken?  Solidly delicious, artery solidifying.  Seriously good stuff.  It tasted like homemade, and I mean that in a good way – it wasn’t amazing, but it was just like I’d make at home.  YUM.  Juicy, moist interior, and crisp skin on the exterior.  I was sold.  Nothing else needed to be eaten for the rest of the meal. 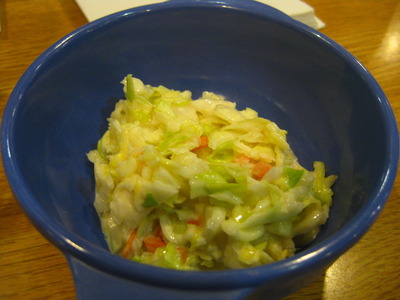 Ah, right, she-who-shall-not-be-named told me the chicken was really good with the cole slaw.  This is southern cole slaw: chopped fine, lots of mayo and lots of sugar.  Sweet and very creamy.  Yeah, it cuts through the grease of the chicken… ahem. 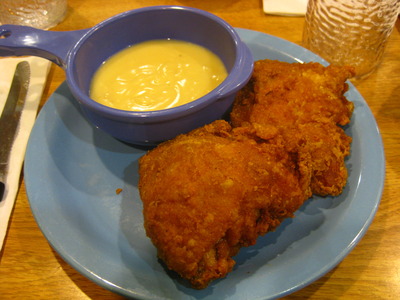 So my next plate was two chickem thighs and um… that’s a bowl of chicken/country gravy.  Yes, yes I did.  I took pieces of the skin, of the chicken, sometimes together, sometimes not, and dipped it in the gravy and ate it like that.  I don’t wonder the reason I can’t lose weight.  I know.  And its name is GRAVY. 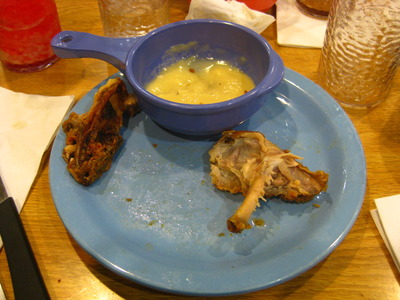 The aftermath.  Are you grossed out right now?  Cuz I’m not.  I’m just hungry.  Hahaha.

So, yes, I had four pieces of fried chicken and more food.  You should see what FeistyMom ate… 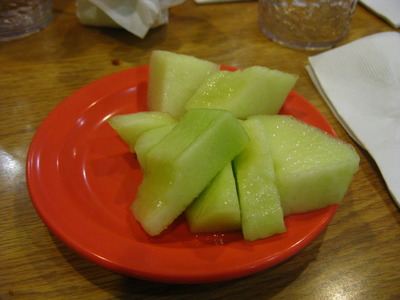 Some fruit once I was stuffed completely on fried chicken and needed to relax a bit. 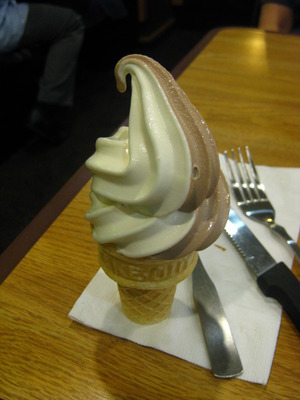 And once I’d relaxed enough, I had some soft serve swirl in a cone.  That’s right.  That’s how I do.

Even better?  She-who-shall-not-be-named mentioned how good the chocolate chip cookies are when they first come out.  Every time I walked by, there were none to be had, though I saw them behind the counter of desserts, just waiting to be made, waiting to be served.  Damn.  But just as I was about to leave, I wandered by and saw that a whole tray had come out.  I grabbed two, and my brother-in-law grabbed two for his wife, and we munched happily on the still piping hot cookies – so hot that we smushed them a little by accident – as we walked out into the very chilly night.

I guess the best part would be the price: it’s about $10 an adult for dinner.  Yeah, seriously.

Sometimes I wonder why I bother going to places in Manhattan…

…then I remember all the variety and the likelihood of me being 300+ lbs. if I lived closer to Old Country Buffet.

Yvo says: Great bang for your buck, undoubtedly, and many options from which to choose.  The fried chicken and gravy combo, however, is definitely the one I’ll return to again and again and again… sigh.  /swoon – wait, that was actually my heart stopping.
recommended