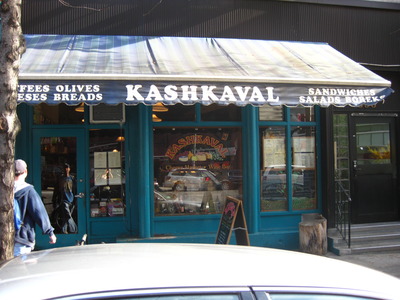 Recently, I was in the city tending to some business on the far west side.  When I was done, BF and I realized how hungry we were, so we walked around about a block before I realized… oh hey! It’s Kashkaval!  My friend Babydot told me about this place literally years ago, when I went to Artisanal, and told me how much she liked it, how it’s better and cheaper than Artisanal for fondue, and how much she just really thought I’d like the place.  With such a rave, it’s almost a wonder I haven’t gone before – but then, I’ve tried several times, only other places always wound up coming up first…

The front of Kashkaval is set up like a deli, with seating in the back.  The dark wood interior makes it feel very cozy, with a long bar to sit and eat at if you wish, and lots of bottles of wines along the walls. 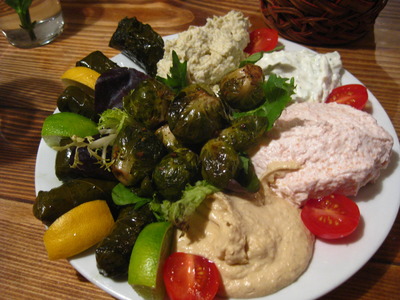 We were seated quickly in a cozy corner table that forced us to sit next to each other, giggling and people watching.  BF wasn’t feeling fondue, so I opted to get a big mishmash plate of Mediterranean tapas.  The above was the large sampler plate – choice of six; I ordered it figuring I’d have leftovers.  I was right. 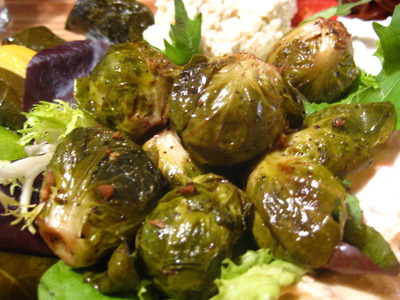 Brussels sprouts; these were tender enough but not a standout.  Good veggie, I like brussels sprouts in general, but unless I was dying for vegetables next time, I wouldn’t get this again. 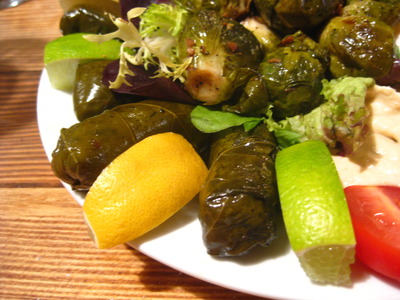 Dolma, or stuffed grape leaves.  Not bad, but not wonderful either. 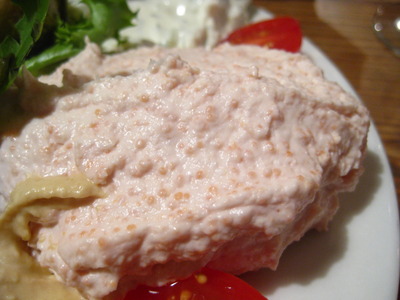 Ahhhhhhh!  Taramosalata, which I quest for every so often.  Not only was this available, but it was actually pretty damn good.  I’ve had a lot in various restaurants that are clearly just the jarred stuff, which has a tinny taste to it, and… that satisfies the craving, but it doesn’t quite get it right.  This one, however, has a good likelihood of becoming my standby… they sell it in the front at $5.99 or 6.99 a lb… mmm just drop by, pick this up with some pita, go home, and call it a night.  Yes, that’s how I roll.  Anyway, taramosalata is a salted cod roe spread, sometimes made with potato, or bread, and always lemon juice and olive oil.  When done right, it smacks lightly of the sea, with a nice refreshing brininess to it that is enhanced with lemon juice.  I love it.  I’ve bought jars of it, mixed it with pasta, spread it on sandwiches, and made my own approximation but slightly Japanese style (with tobiko or masago, mayo, and hot sauce)… oh so good.  I love it.  I love roe.  And this is a very, very good version. 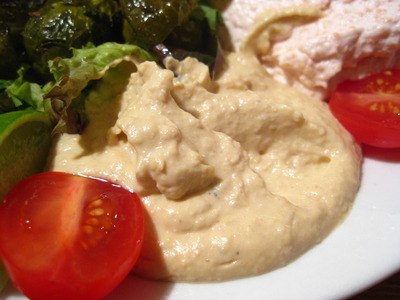 The hummus was serviceable, though nothing exciting. 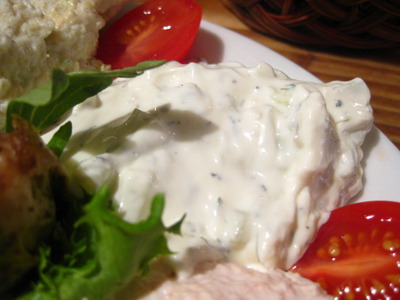 I enjoyed the tzatziki as well, between dips of taramosalata. 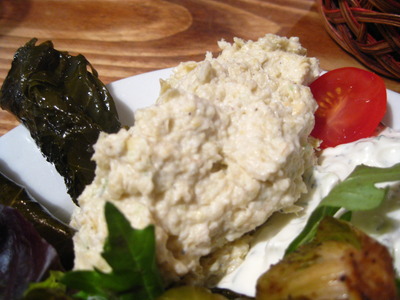 But the surprise of the dish – which was even funnier given that I was deciding between this or the baked beets, but was convinced otherwise by our server – was definitely the artichoke dip.  Chunks of artichoke, held together by what tasted like a well-seasoned cream cheese, just perfect.  Salty, creamy, and chunks of artichoke… yum!  I need to create my own recipe for an artichoke dip! 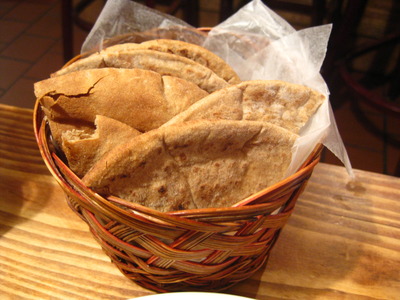 And all of thise was served with an abundance of pita bread, warm.  Yum! 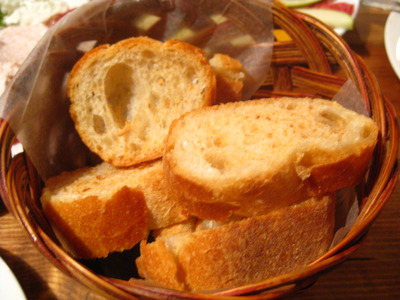 BF went with a meat and cheese plate, which started off with some stale French baguette.  I’m really picky about my bread, as is he – he prefers Italian bread/seeded semolina (and I prefer excellent baguettes), but we both agreed that this was felt like they’d cut it too early and then left it out to dry out.  Hmph.  Thankfully, though he’s picky and will comment on it, it won’t stop him from eating… 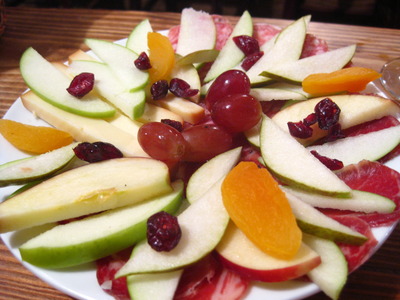 This is the picture I took of his platter – the smallest size they offer, by the way! – with a lot of lovely fruit scattered on top.  (Does anyone else experience this: you see a dried apricot, and it looks so wonderful, juicy, soft, and bright… and then you bite into it, and you’re like, DAMMIT TRICKED AGAIN I DON’T LIKE DRIED APRICOTS! … yeah, me neither.  We were talking about how good they look but how deceiving their looks are!)

His cheese: smoked cheddar, which he carefully cut off the darker parts of each piece of cheese, and I happily gobbled up, loving the smokiness.  His meats: I know one of them was prosciutto, which he noted was a little sinewy and fatty – with that “string” of fat you sometimes find along a slice of prosciutto… the other meat, I didn’t hear any complaints as he ate them.  The fruits topping it were greatly appreciated to cut the fattiness of the meats and cheeses! 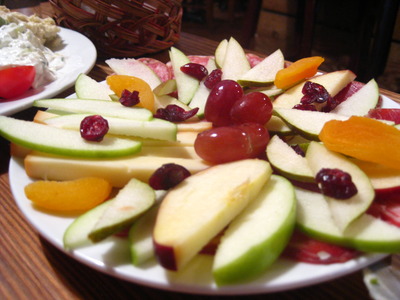 Why is there a second photograph?  Because I took a photo, and he insisted that it was a terrible photograph and he wanted to take one with a better angle.  So… here is his photograph.  You decide which is the better photograph.  😉

Yvo says: Very cute place with a lot to offer anyone in the area just dropping in for a bite to eat, or lingering over some romantic fondue.  I am definitely going to go back and make sure it isn’t a few years before I return!  Reasonable prices as well, and lots of choices for small bites… yum!
recommended