The other day while I was at work, I got an urgent email from my Dad. My Mom had a procedure done on her knee earlier in the day and it would be better for her to stay home and not go to a James Beard dinner that night. Would CT and I be interested in taking their place? Of course, I had to check with CT, but of course we were interested.

The dinner featured Niagara Wine Country Dinner with Chef Frank Dodd and Winemaker Craig McDonald of Hillebrand Estates Winery and Restaurant in Niagara-on-the-Lake, Ontario, Canada. I swear I didn’t plan it for both of CT’s experiences at James Beard to be Canada-centric!

There was a great selection of Hors d’Oeuvres to be had. I smarted up this time around and took pictures of all the different items in the kitchen where the lighting was best. The Chef(left) and his team were super nice and didn’t even mind us taking pictures of theme in action. 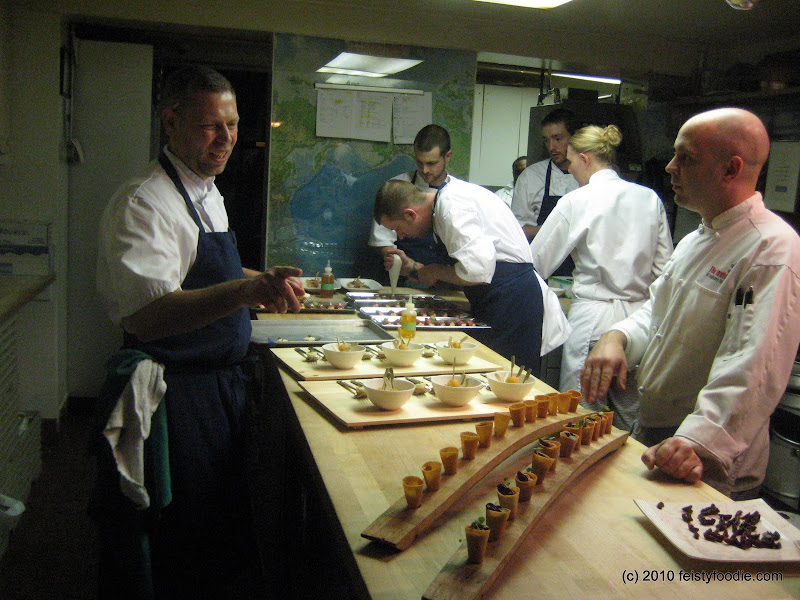 Of course, the first pic CT got was of the Foie Gras and Chicken Liver Parfaits. This was a fun presentation in cone-form and the beet on top and inside gave a good contrast to the super smooth foie gras and chicken liver. I had one even though that I am not the biggest fan of either, but even I couldn’t complain about that. It was a great preparation. 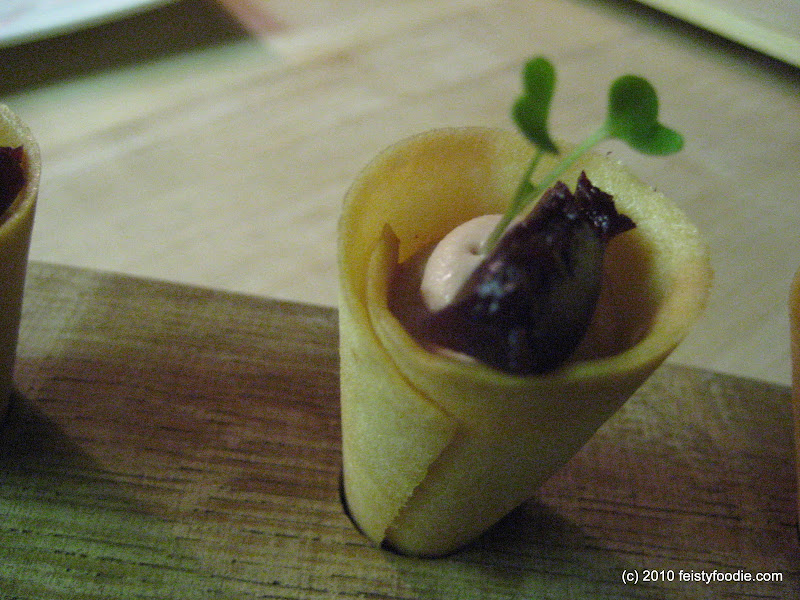 CT says: These were heavenly! A perfect ratio of the silky smooth foie gras filling to a thin crisp cone-cracker and the diced beet on top lent just a touch of sweetness to balance the creaminess. I could have made a meal out of these alone, but someone, ahem TT, limited me.

The Ewenity Sheep’s-Milk Croquettes were one of my favorites. Super crisp, right out of the fryer, but not greasy. 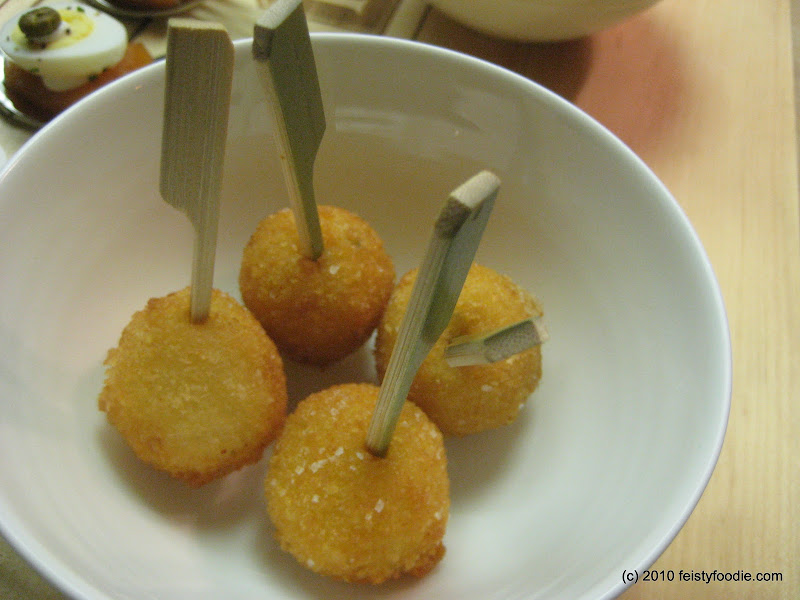 CT says: Once you pop you can’t stop. Crunchy and creamy!

These quail eggs were served with the croquettes, but I don’t remember what everything on the fork was besides being delicious. I think it was Ice wine-cured and Smoked Balik Salmon underneath the egg. 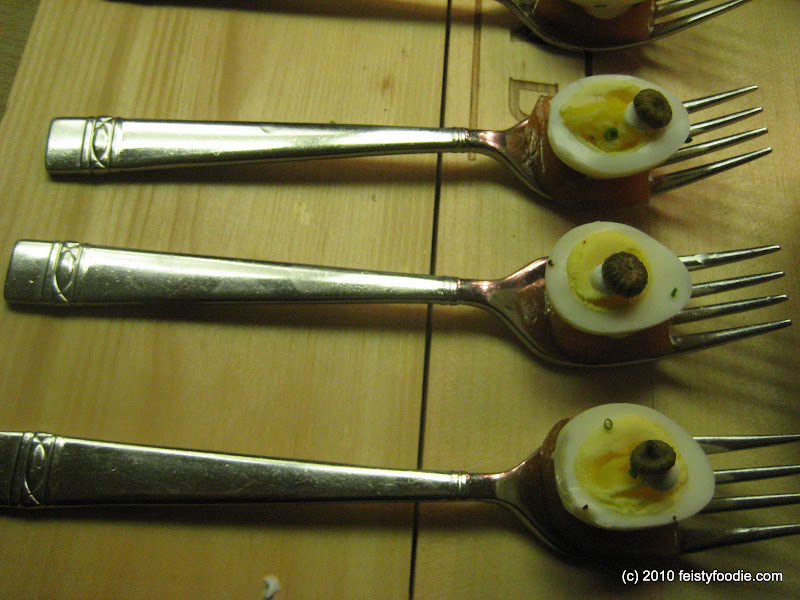 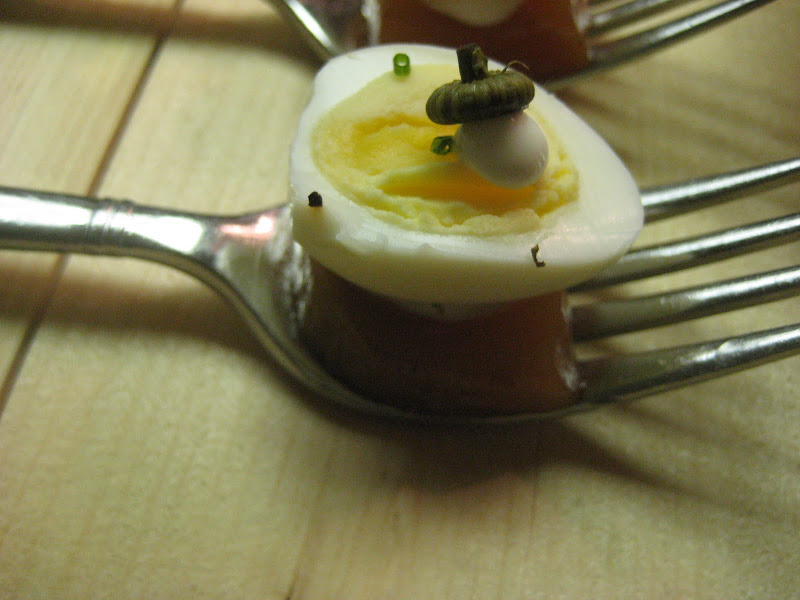 CT says: The egg had a great flavor! I think I need to start buying higher quality eggs from the farmers market, the difference in taste is quite noticeable!

Dingo Farms Grass-Fed Beef Carpaccio with Wild Cattails. I never had cattails before. It was similar to melon in taste and consistency. The beef was nice and beefy!(How do you like that description, FoodBuzz attendees?) 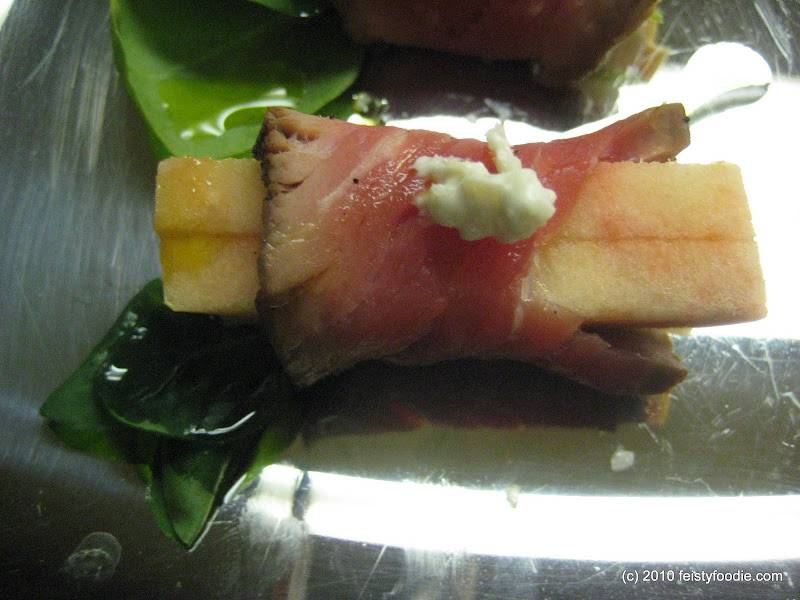 CT says: I liked the cattails too! I had never heard of them before, but I will keep my eye out in the future. It was a nice combo of slightly sweet-crunchy cattail to soft meat.

Berkshire Prosciutto with Maple and Pears. I believe the pears were macerated in ice wine. A common theme of the night. A good mix of salty/sweet. 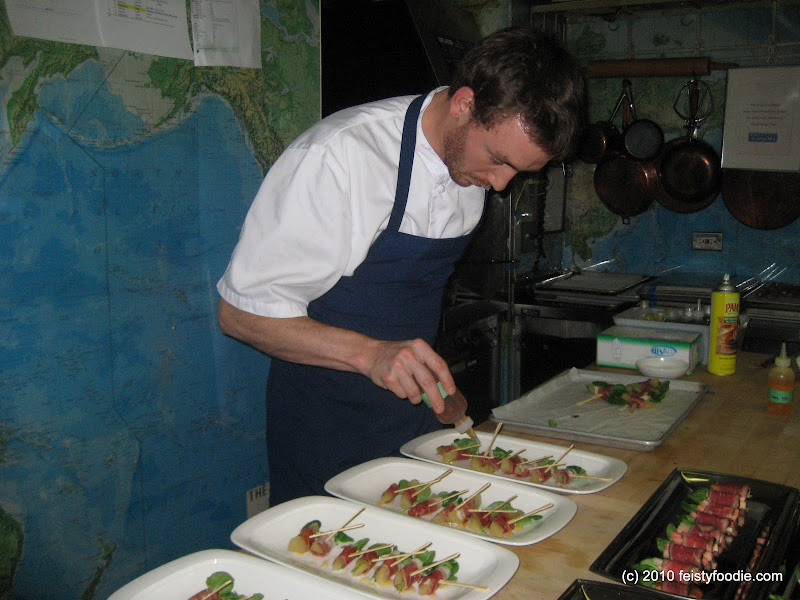 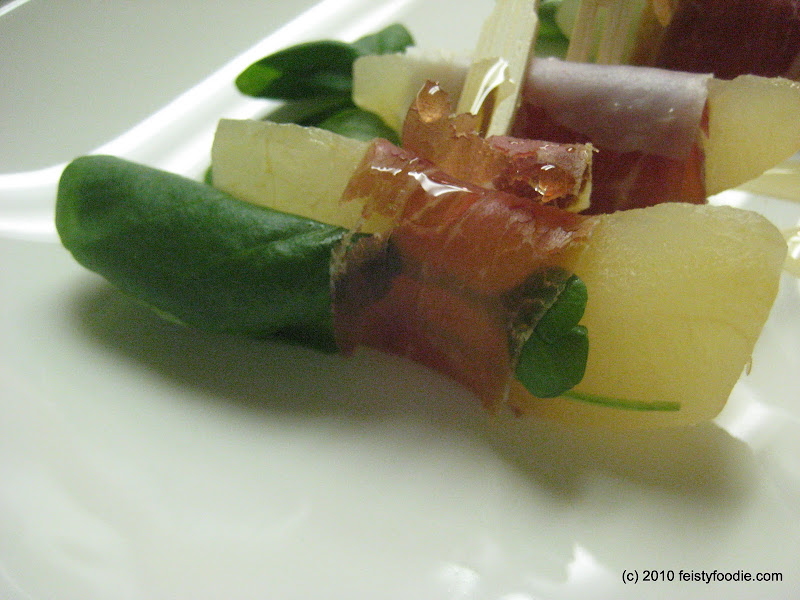 CT says: A nice twist to the standard prosciutto wrapped melon – with some very good prosciutto!

I have learned in my fortunate time of attending many James Beard events to take it easy on the hors d’oeuvres since there would be a lot of more delicious food to come. This night was no exception.

The first course was all about Berkshire Pork from Dingo Farm. The plate had Pressed Head Cheese, Ham Hock Broth, Fried Blood Sausage, and Bacon Ice Cream with Bacon/Maple Sugar. There was also another quail egg to make sure our cholesterol levels weren’t too low. Each item was very good even the bacon ice cream. The sweetness of maple/bacon sugar contrasted nicely with subtlety flavored ice cream. The broth was light and flavorful served in a pastry-topped coffee cup. This was served with the Hillebrand Showcase Merlot 2007. 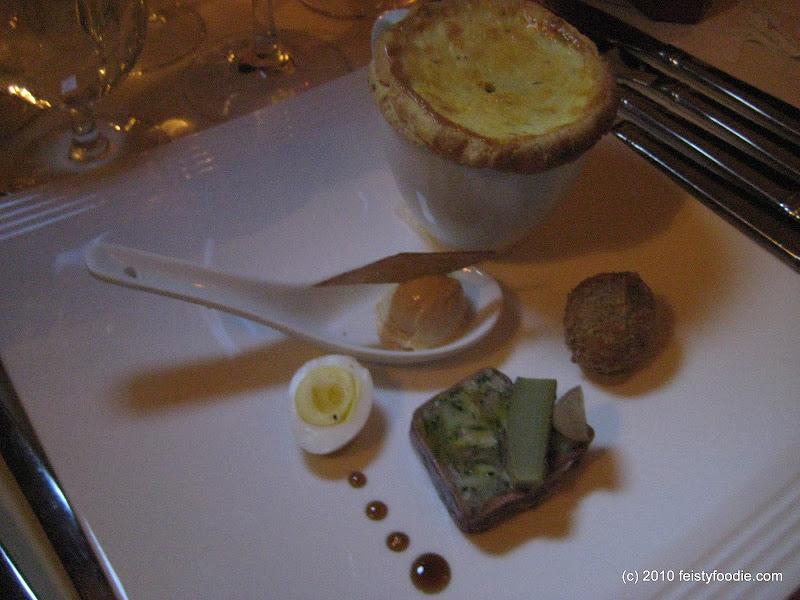 CT says: I loved everything, save the bacon ice-cream. The fried blood sausage was my favorite and I wish I had two of these! The ham hock broth has some amazing flavors packed into a little cup. The bacon ice-cream/sugar combo just didn’t do it for me; I also tried each individually and that was even worse. So, I just stuck to all the delicious savory pork options.

Next was Ice wine-Pickled Heirloom Chioggia Beets with C’est Bon Goat Feta, Organic Watercress, Vidal Syrup, and Beet Sorbet. The beets were all perfectly cylindrical which enhanced the excellent presentation. I liked the beet sorbet. It was mild and refreshing, not overly “beet-y.” The goat cheese feta was pretty mild, so it was a bit of a stretch to be called a feta. I never heard of Vidal syrup before and learned it is made from the same grapes used to make ice wine. The syrup really brought all the elements of the dish together. This was served with Hillebrand Showcase Riesling 2009. 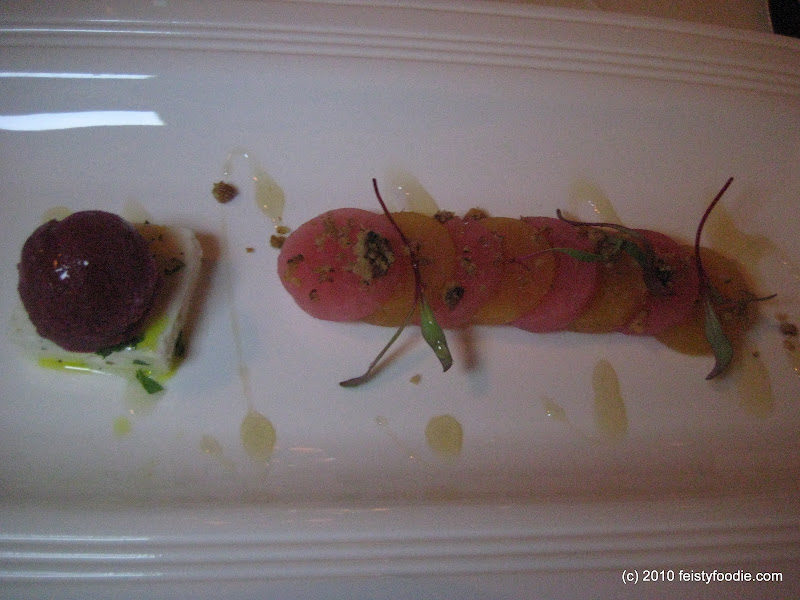 CT says: This was a nice dish, especially refreshing after the heavier pork-filled first course. I was hesitant about the beet sorbet, after the bacon ice-cream, but I really liked it and thought it balanced the cheese well.

Lake Erie Yellow Perch with Toscano Cheese Gnocchi, Wild Spot Prawns, Squash Ratatouille, and Picard’s Peanuts. I don’t have perch that often, so it was a welcomed change. It was light with good texture. The prawns brought a nice sweetness to the dish. Unfortunately, the gnocchi were a bit heavy and gummy. Paired with Hillebrand Showcase Single Barrel No. 7026 Chardonnay 2008. 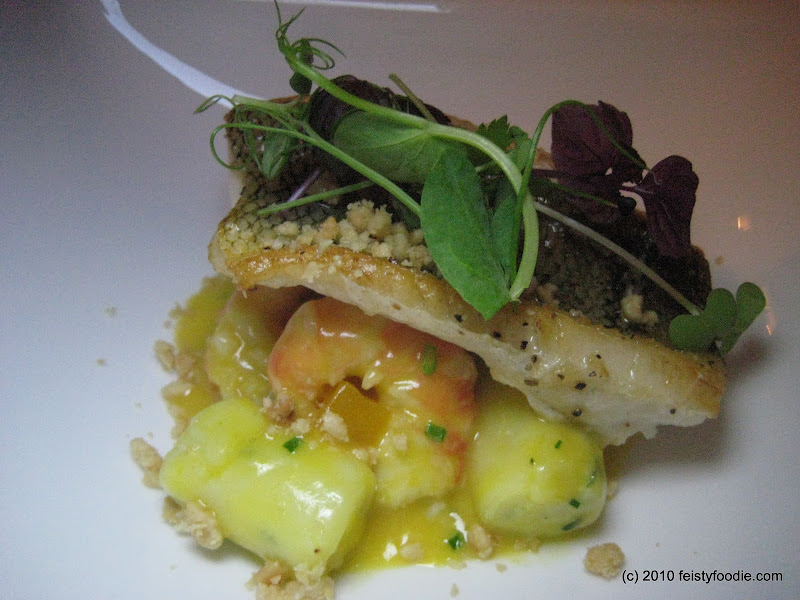 CT says: I have never had perch before, and I don’t think I’ll be having it again. While I liked the flavors of the sauce, I just didn’t like the texture of the fish. It wasn’t over or undercooked, it just wasn’t to my taste. However, I did eat all my gnocchis and prawns! The gnocchi was a bit dense, but that cheese sauce was too good to resist.

We were all given a palate cleanser of a mini ice wine popsicle. 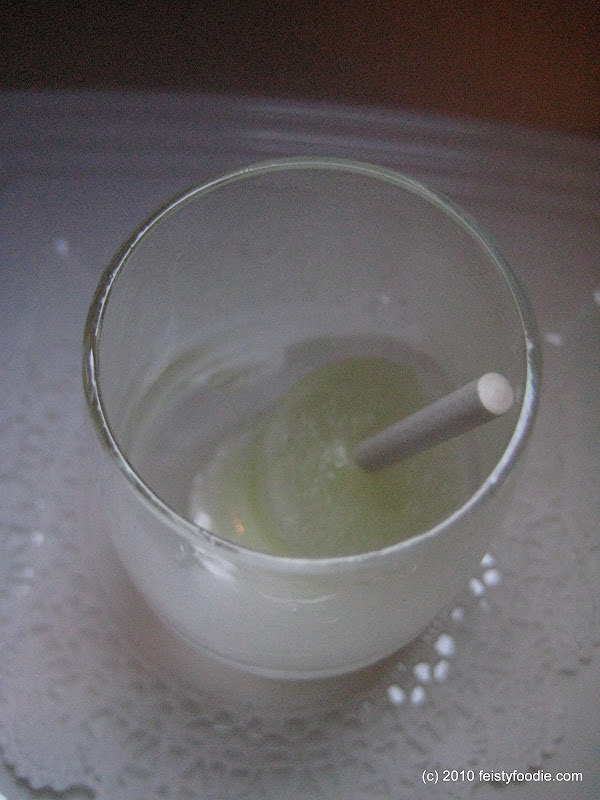 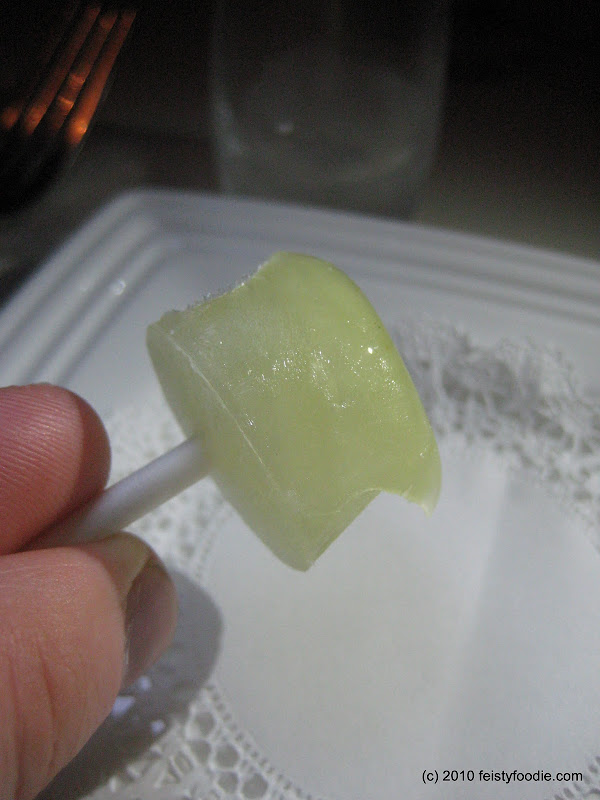 CT says: Why have I never thought of making wine popsicles before?!

The meat course was Blanbrook Farm Bison with Forbes Birch Syrup, Cornmeal Potpie, Ice wine Red Cabbage, Forgotten Vegetables, and Niagara Gold Potato Gratin. The bison was perfectly cooked, but it was wrapped in what I think was skin or muscle which was inedible. The cabbage was delicious. The ice wine really brought out the sweetness which helped lighten up the whole dish. Paired Hillebrand Showcase Cabernet Sauvignon 2007. 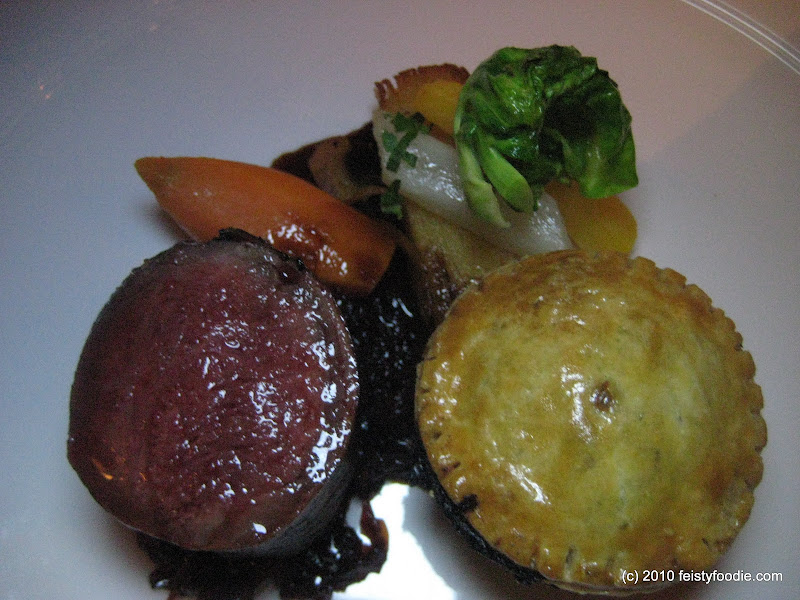 CT says: Inner meat of the bison was great – cooked to a great rare/medium-rare. The pot pie had a nice flaky crust. Other than that, I was getting too full to recall much else.

Finally for dessert, Upper Canada Ricotta Cheesecake with Back Vintage Wine-Soaked Niagara Orchard Cherries and Dark Chocolate. I had a bite or two of the light and fluffy cheesecake. The cherries weren’t too sweet from the soaking, which was a lot more pleasing to my savory palate. We had the Hillebrand Showcase Cabernet Franc Ice wine 2008 to drink. 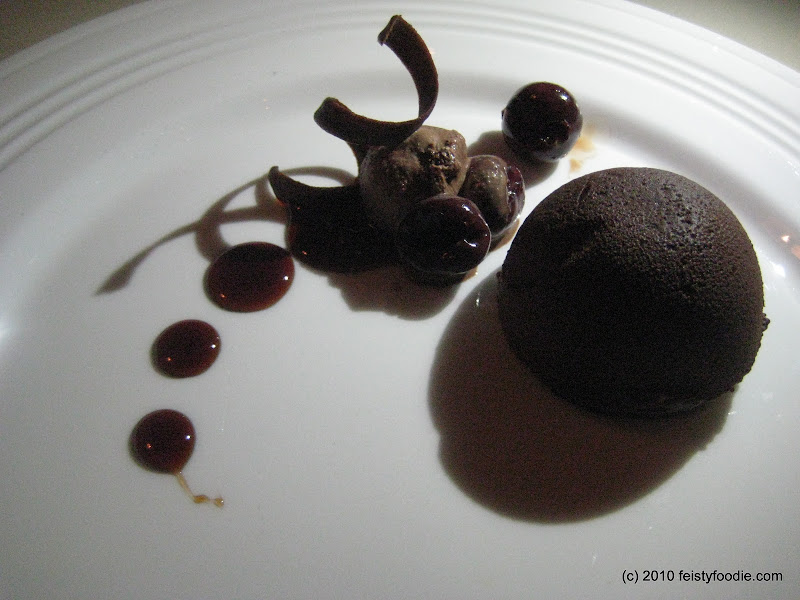 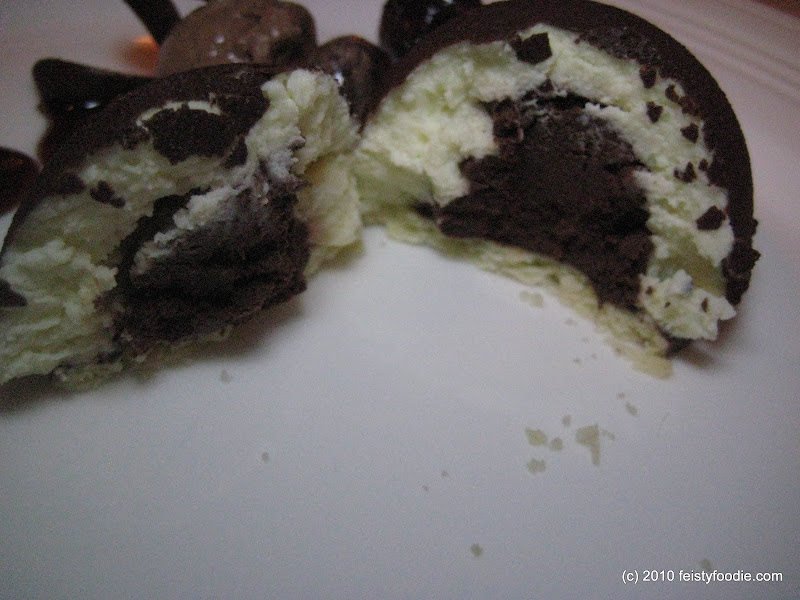 CT says: As full as I was, there is always room for dessert. I forgot to look at the menu, so I was pleasantly surprised when I broke into the ice-cream-scoop looking thing and found a little cheesecake! A chocolate cheesecake in a regular cheesecake dusted in more chocolate – genius! It was so light, I could have eaten the whole thing… but after an indulgent evening I refrained to just a few bites and the chocolate spiral – yum!

All in all, it was a great meal. It was even better than the meal I just had there a couple of weeks before. Chef Dodd really knows how to make his ingredients shine. I was also pretty impressed with the wines we drank since only the dessert pairing was with the ice wine. I will definitely be on the lookout for some red Canadian Cabernet next time I am at the wine store and recommend that you do the same. Thanks again to Mom & Dad for allowing CT & I to take their spots at this wonderful event.