The Beer Boor and I were recently invited to checkout Sel et Poivre, a traditional Upper East Side French bistro. This was a special tasting menu(although the printout said “testing”) for a group of bloggers, reporters, and the like. The restaurant has been a neighborhood fixture for over 20 years. After being seated, I immediately was drawn to the printed menu which also indicated that there was to be a wine paired with each course.

We started off with Fish Soup. This was a very light, but flavorful broth to which we could add a garlicy thousand island-type sauce, cheese, and croutons. It was paired with Stellina Di Notte Prosecco. This was a nice way to start the meal. 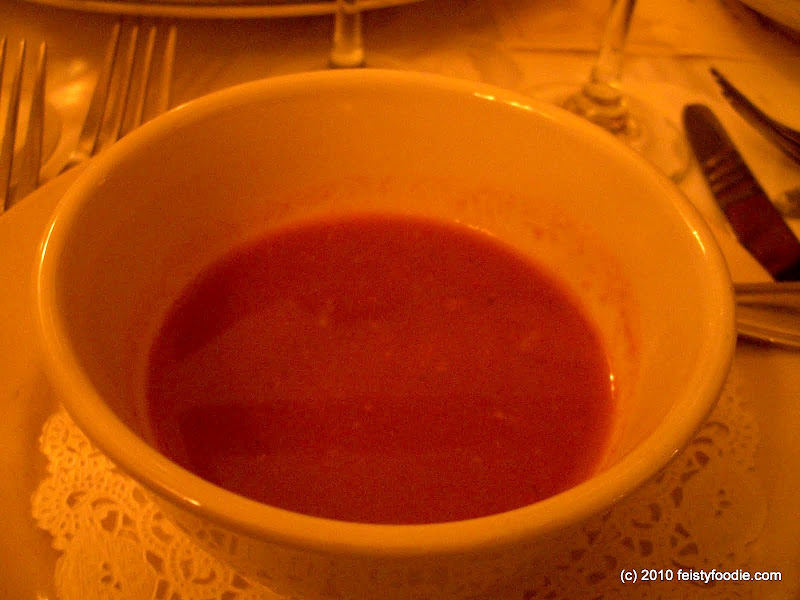 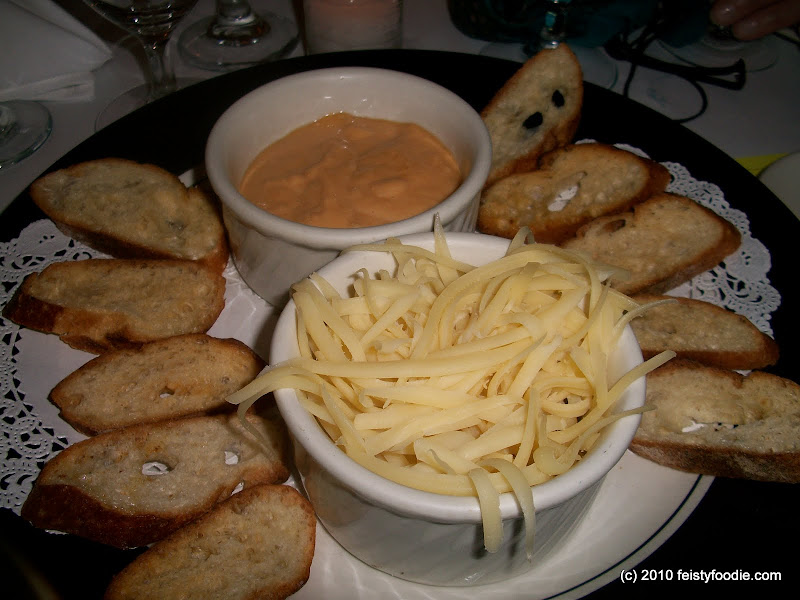 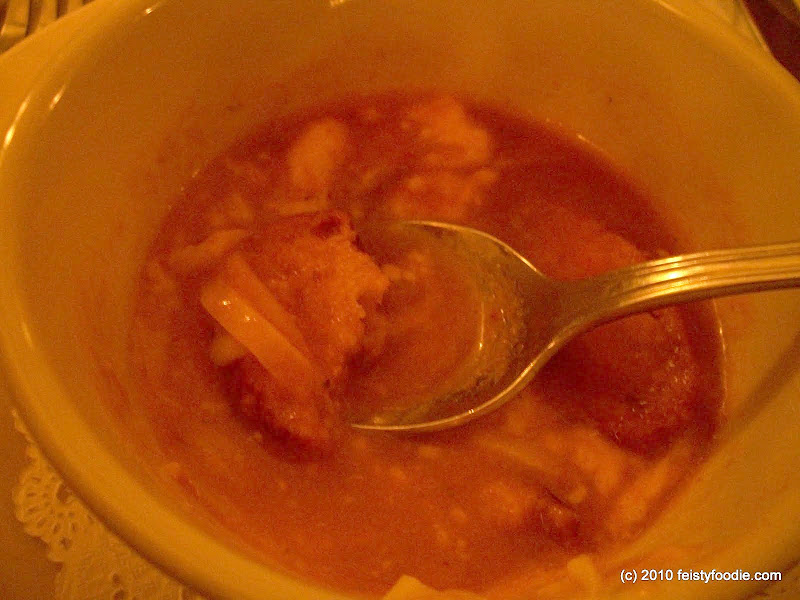 BeerBoor: but kind of unwieldy to have us essentially construct our very own French Onion Fish Soup, hold the onions.

Next was celery root remoulade with red beets paired with 2008 Kremser Weinzierl Gruner Veltliner. The owner/hostess also mentioned that there was a hint of cumin. I felt the cumin was not subtle at all, but not a dealbreaker. This was a nice change from a generic salad that could have been offered instead. I am glad the Chef did not take the liberty of calling it a beet tartare even though that it was the dish looked like. The wine did a good job counteracting the strong flavor from the cumin. 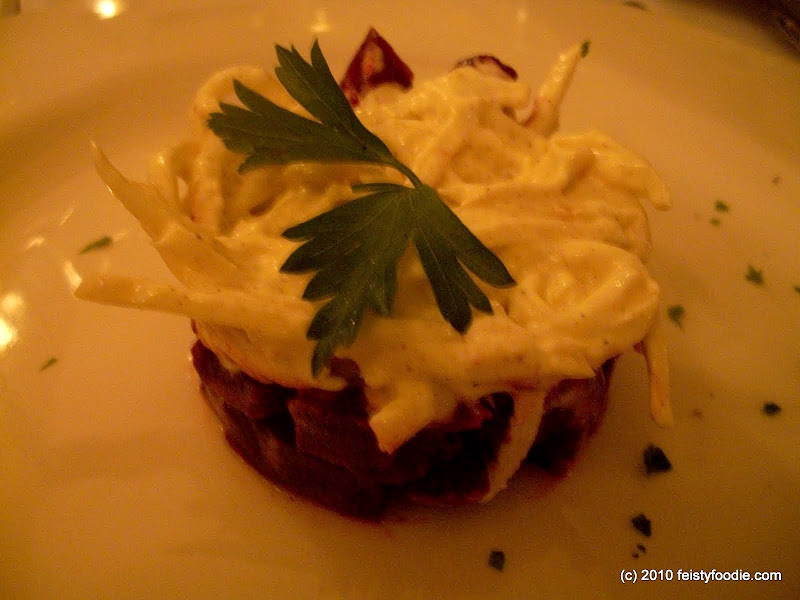 Skate fish with lemon, capers and basmati rice. Paired with the 2007 Weinguthimmel Riesling. I think the consensus among the group was that this was the best dish of the night. The skate was perfectly cooked. The fish was super tender and the acidity of the lemon accentuated the flavor nicely. I normally do not like Rieslings as they can be on the sweeter side, but this one worked very well with the fish. 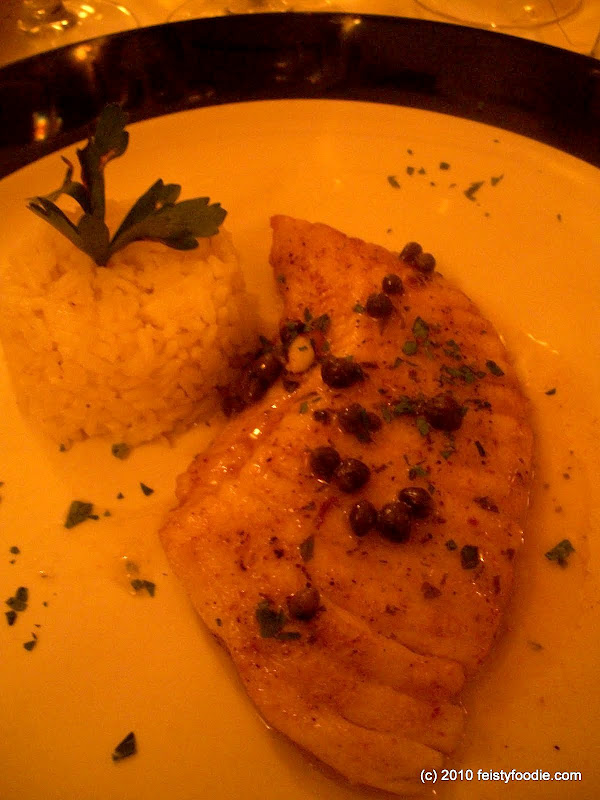 BeerBoor says: I liked the skate, but it seemed lacking a little something. I’ve had more-tender skate, though this was fairly close to the best I’ve had recently. This skate came off a little stringy and a little bland. The Riesling, however, was very good, lots of honeysuckle and tropical fruit though not as acidic as I prefer.

Calves liver a la Lyonnais with mashed potatoes and broccoli. Paired with 2007 Rosenblum Cellars Syrah. I was a little apprehensive when I saw liver would be served. I consider myself to be an adventurous eater, but liver is just not my thing. I kept an open mind and actually liked it. It was cooked nicely and not minerally at all. Needless to say I could not finish the whole portion as it was very rich. One of my father’s favorite wineries is Rosenblum, so I believe I have had this wine before. It was a stronger Syrah so it held up nicely against the liver. Unfortunately, the broccoli was no where to be found. It would have been nice to have some more vegetables. 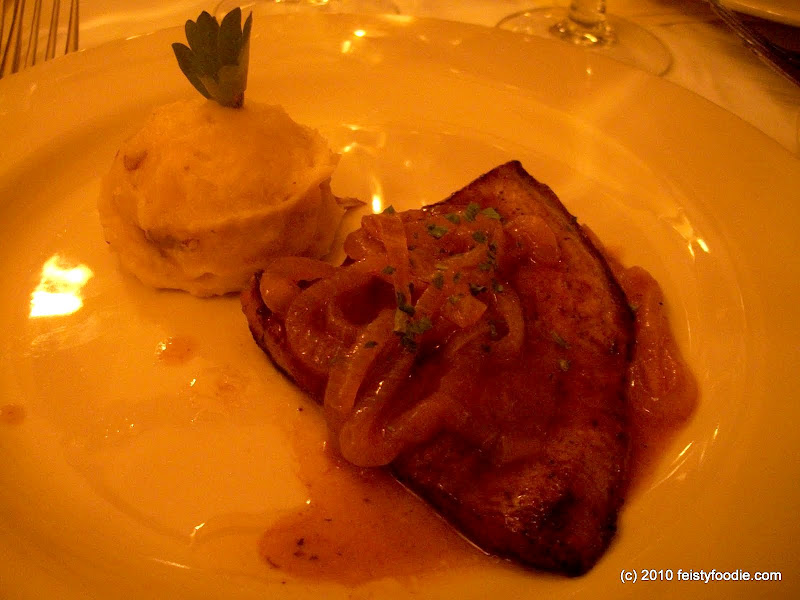 BeerBoor says: This was my favorite dish of the night. Rather than serving a thick chunk of organ meat, the chef prepared it as a very thin slice, grilled and dressed, and while it was still rich and dense, it was thin enough that the flavor of the liver wasn’t overwhelming and the texture was far more my speed than typical liver. The Syrah, however, was terrible: mushy, flat, and gave the sensation of chewing on grape skins.

As a special treat, the Chef sent out their signature Steak au Poivre and housemade frites for the table. Unfortunately, the steak was too overdone for my taste, but my fellow diners seemed to enjoy it. The frites were delicious and happily gobbled up very quickly. 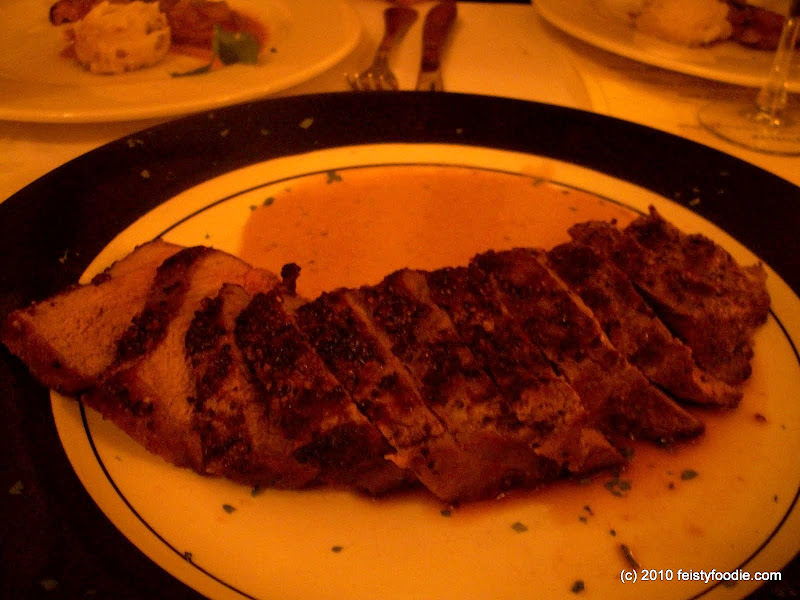 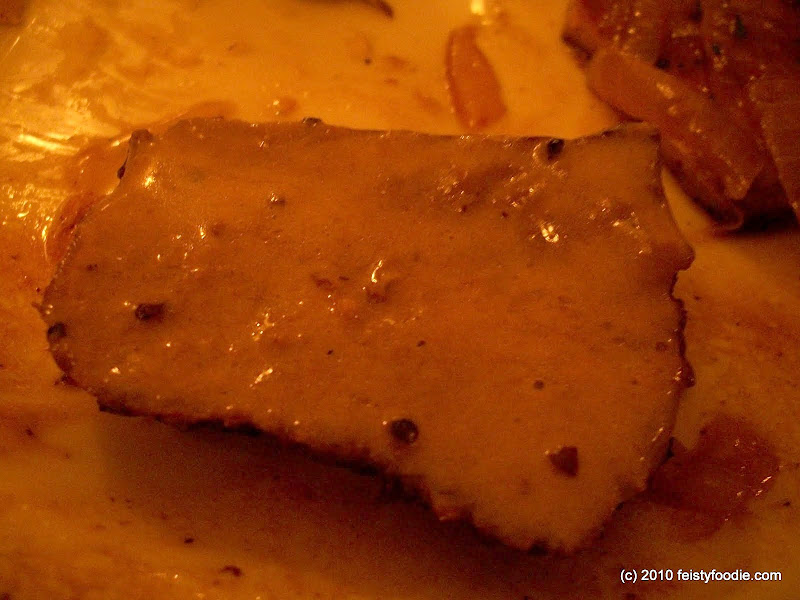 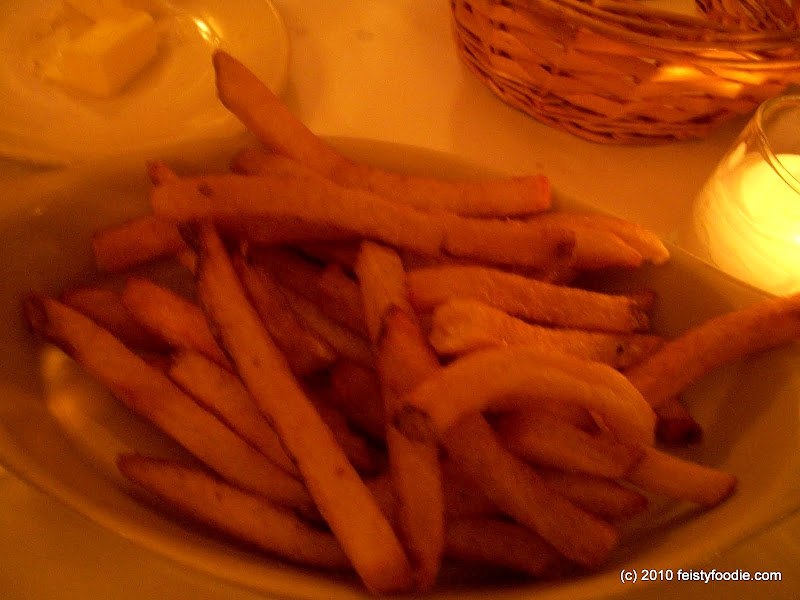 BeerBoor says: The steak was easily medium, far too cooked to my tastes either, and honestly not really “poivre-y” enough for the dish. The slice I sampled was rather dry as a result. The frites, however, were excellent, quite nearly perfectly-cooked.

Finally, the Terrine de chocolate served with a raspberry coulis. Paired with a 2005 Chapelle-St-Arnoux Muscat. As you all know, I am a savory person, so dessert does not mean that much to me. I had a couple bites of the super rich “terrine.” Think of it as a dense, dark chocolate mousse. The muscat was nice, but a little too sweet for me (yes, I still drank the whole thing). 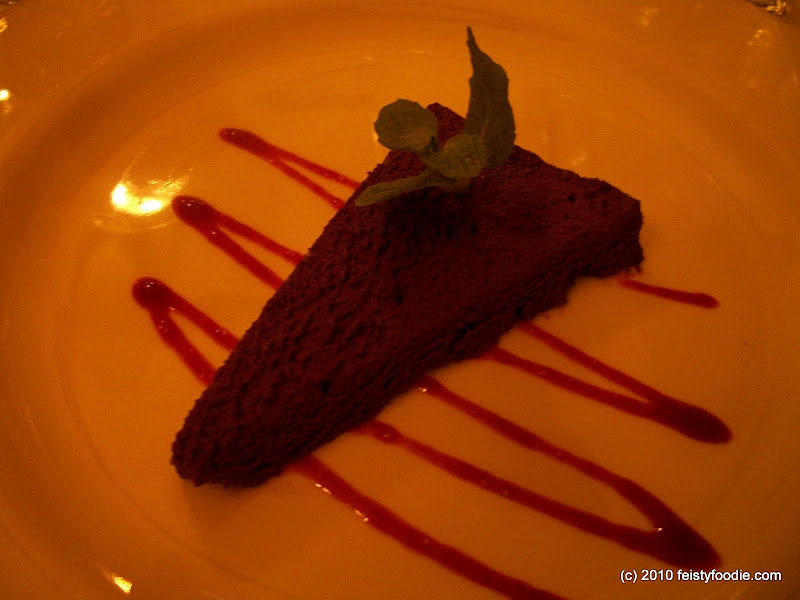 BeerBoor: I’m normally apprehensive of flourless desserts where flour seems appropriate, and the terrine probably would have been better to me had it a little lightness. Instead it was much denser than the typical mousse, and while I did eat it — the coulis added little other than color and presentation — it was a bit of a chore. The muscat was a very good dessert wine, and so the small pour worked well not to overdo the sweetness already on the plate.

All in all, it was a very nice meal on an otherwise quiet Wednesday night. Sel et Poivre may not be the hippest restaurant in the city, and you may run into your grandparents there, but at least you should be able to get a good meal out of it. Thank you to the owners and staff for hosting us.

Please note that this event was courtesy of Sel et Poivre. I received no monetary compensation for this review, nor was I obliged in any way to post about this meal, positively or otherwise. This is my own opinion and I feel it was unbiased; you are free to take from this what you will.