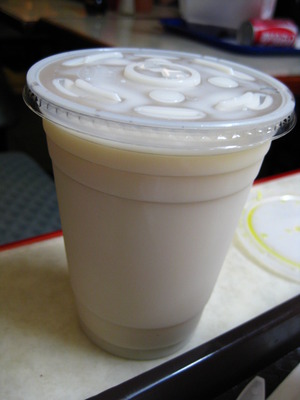 I recently returned to Hing Won for lunch with a friend, and found myself ordering the soy milk even though I was only so-so on it last time… 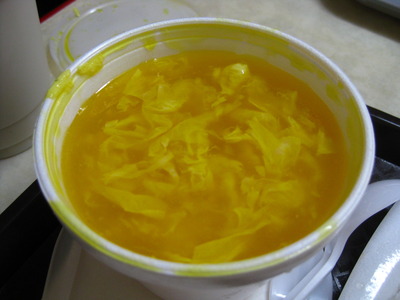 a neon-yellow container of egg drop soup, which was piping hot and remained such for the entire meal.  I am still sick, thus the addition of soup; it was what I expected and nothing more, very much in line with what takeout places serve.  They probably thought I was weird for ordering it but whatever.  My dad made an excellent egg drop soup that I have tried hard to replicate and occasionally have a lot of trouble with, so this sufficed on that day. 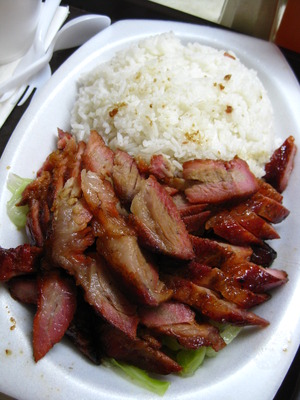 And here’s where I mega-fail.  I totally did not see roast pig on the menu, so I blurted out “roast pork with white rice, please” when it was my turn to order.  Uhhh, so they gave me roast pork (char sui for the Cantonese or food-fluent among y’all), which is what I ordered, but not what I wanted… Regardless, very tasty and definitely a solid entry into the roast pork world.  Not at all pricey, either.  Yum! 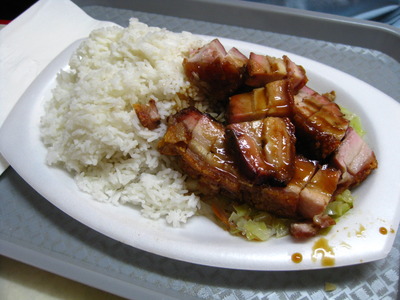 My lunch date ordered the right thing, to my extra chagrin: roast pig.  Sure you can argue it’s the same thing, though in Chinese, they translate similarly, the method of prep is so different.  Crispy skinned pork, a slick of sauce, and yummy fluffy white rice to temper the salt.  YUM.  He was very pleased with his choice, and sweetly enough, seeing how distressed mine made me, kept offering me some of his, but honestly, I didn’t want any because I know I’d be bitter that I ordered wrong.

Underneath our meats was a layer of cabbage mixed with glass noodles, strangely enough, but I liked the addition of random veggies giving the illusion of healthiness.  Though it was a bit salty, mixing it with the white rice really helped that and made for an overall enjoyable meal.

Yvo says: As I remarked to my friend after lunch, if I worked in the area, I would steadily work my way through the entire menu here easily.  Whenever it’s rainy or crappy out, whenever I’m feeling down, whenever I just want Chinese food… I’d be here.  Some of this doesn’t classify as comfort food for me, but it would still be lovely to have an inexpensive, relatively yummy, somewhat authentic Chinese place nearby to the office that I could just eat whenever I wanted… I’m kind of craving this now!  Yum!
recommended