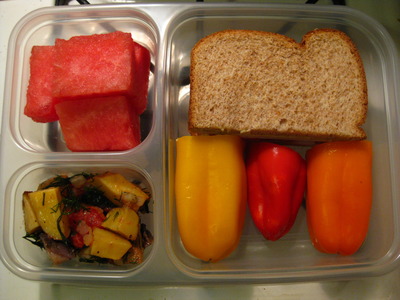 As mentioned last time, BlindBaker and I are taking turns making bento for each other.  But that’s only Monday/Wednesdays, so what about the rest of the week?  On Mondays, I actually have class until 9pm, so I need to also bring dinner; Tuesdays, I “only” have class from 1-5, so I usually eat at home… but on Thursdays, I have class from 10-4, with only a 20 minute break from 12:50 – 1:10, during which time I have to walk from the western side of campus to the northeastern side, anyway.  Basically, I need to bring food to inhale, or I’ll starve.  So one Thursday, I brought the above bento. 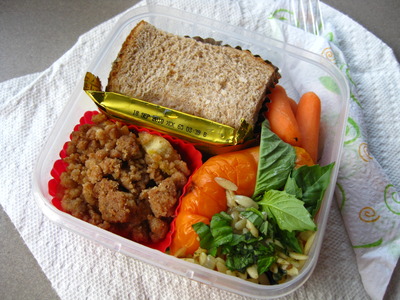 BlindBaker’s week came up, and I somehow only have a picture of the Monday bento – though the Wednesday bento was near-identical, so no big deal.  I’m sure she’ll pipe up to correct me if I’m wrong, or with recipes, but: capicola and artichokes on whole wheat bread; Cracker Barrel cheddar; baby carrots; roasted orange bell pepper stuffed with pesto orzo; Dutch apple crisp.  Yum! 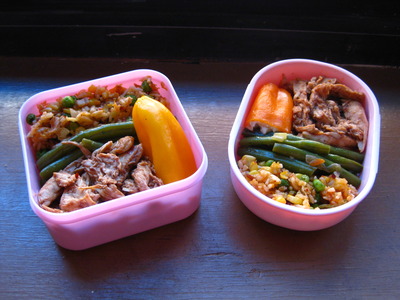 Next week, back to my turn! 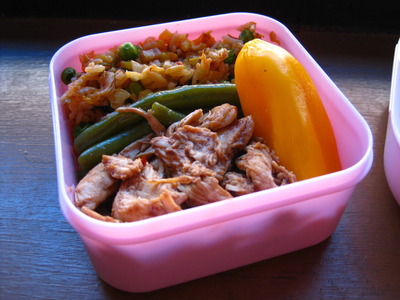 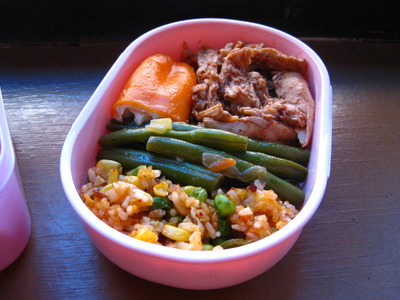 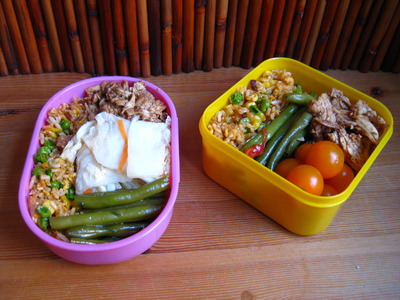 And on Wednesday, two more bento! 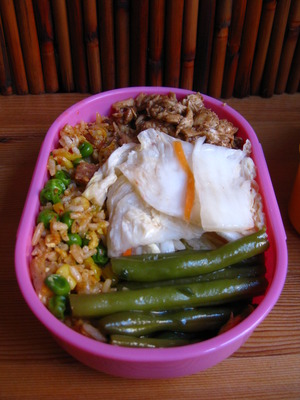 Here’s my bento: instead of a mini bell pepper stuffed with hummus, I put some summer kimchi in there, leftovers. 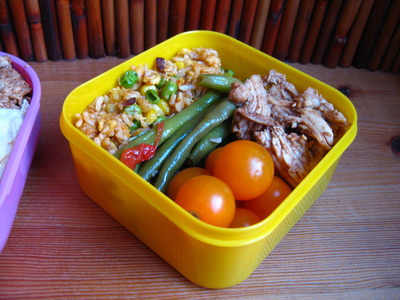 BlindBaker actually didn’t wind up eating this bento – I ate it for lunch on Thursday instead – but she got Sungold cherry tomatoes instead of a bell pepper as well.

two – three boneless/skinless chicken breasts (I usually use 4 thighs, but this time used 3 frozen chicken breasts from Target bc I had them)
BBQ sauce – either one you like, or homemade is good too obvs
crushed red pepper flakes
honey

Line a baking sheet with tin foil.  Lay the chicken pieces down and cover with bbq sauce, crushed red pepper flakes and a bit of honey.  Bake, turning once, for about an hour or a little longer (test the chicken for doneness).  When it’s done, while still warm, use two forks to “pull” the meat, then toss with the sauce that’s remaining on the sheet.

5 strips of bacon, cut/snipped into small pieces
Diced onion
Minced garlic
Few cups of cold cooked rice
2 eggs, beaten well with a 1/2 teaspoon of sugar or so
A bit of kimchi, chopped up
Frozen veggies (I had some peas left from another dish I’d made, and I opened a package of corn)
Splash of soy sauce

In the bottom of a heavy skillet over very low heat, cook the bacon.  More fat is rendered this way; you can pour off some or most of it before you continue to the next steps, but I found for how much I made, I used all the fat.  Stir it occasionally as the fat renders, to prevent sticking and to redistribute.

After the bacon looks all crunchy (this takes a long time, like 20 minutes or so), raise the flame, add the diced onion and minced garlic, stirring a little.  Cook until the onions are translucent; about 2-3 minutes.

Add the cold rice, breaking it up if necessary, then let it turn a bit golden, “frying” it a bit.  Once that’s done, push everything out in a “ring” around the center, leaving a big empty spot in the center.

Pour the beaten eggs into the empty spot.  After it sets a teensy bit, stir it within the center ring, and continue until you have very soft scrambled eggs, then stir the rice into it, mixing it all together into one big happy pot of food.

Add the kimchi, tossing everything together, then add the frozen veggies.  Once the frozen veggies look not-frozen-anymore, add a splash of soy sauce just for color (though the kimchi probably added a lot of color already), then taste, adjust for seasoning, and then…

***Kimchi is totally optional; if you can’t get kimchi or just don’t like it, that’s completely fine.  I don’t really eat much kimchi at all as I can’t eat much spicy food, but in the fried rice, the spice is really tamped down and becomes a background flavor.  It’s vinegary, and ever so slightly spicy in my version, which makes it a nice touch and counter-taste to the smoky, salty bacon.  I recommend trying this dish once and then deciding if you hate kimchi or not… yum!