Since CT and I were staying in town during the Labor Day weekend, we decided to check out the Parked Food Truck Festival on Governor’s Island. We had such a great time at Meatopia last time we were on the island that we were really looking forward to this. It was a little different this time around as there were no tickets to buy ahead of time, everything was a la carte from each vendor. There were about 14 vendors there serving a wide variety of food and drink. CT & I have learned well and stick to the mantra of always arriving early for any NYC based food festival. New Yorkers like to eat!!

The festival didn’t technically start until 12, but a lot of the vendors started serving at 11:30. We were there with Goats and his GF along with my buddy Matt and his GF. We all started off with some different things. The main problem with the festival was that each vendor was offering (from what I could tell) their full menu. Therefore, each person had their item basically made to order. At least at Meatopia, each table offered one item so there was basically no wait once you got to the front of the line. The lines at Parked started immediately and continued to grow throughout the day.

After walking around CT and I realized that it would be pretty difficult to try food from each truck. Although our food babies cried a bit, it was nice to not totally stuff ourselves silly.

Here are all of the vendors that were there. 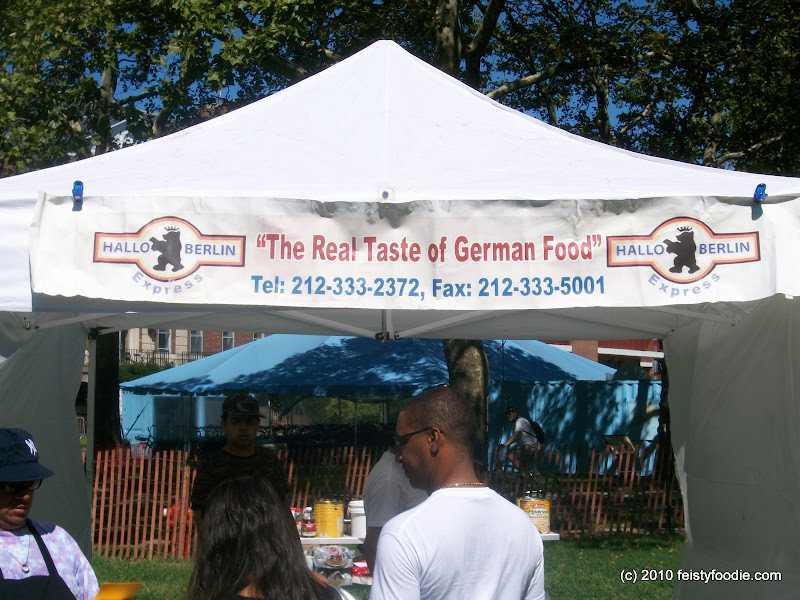 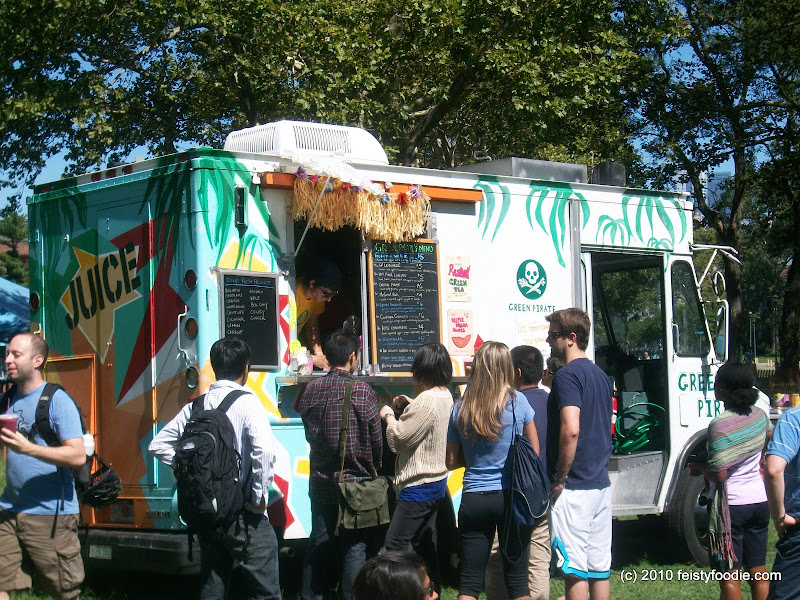 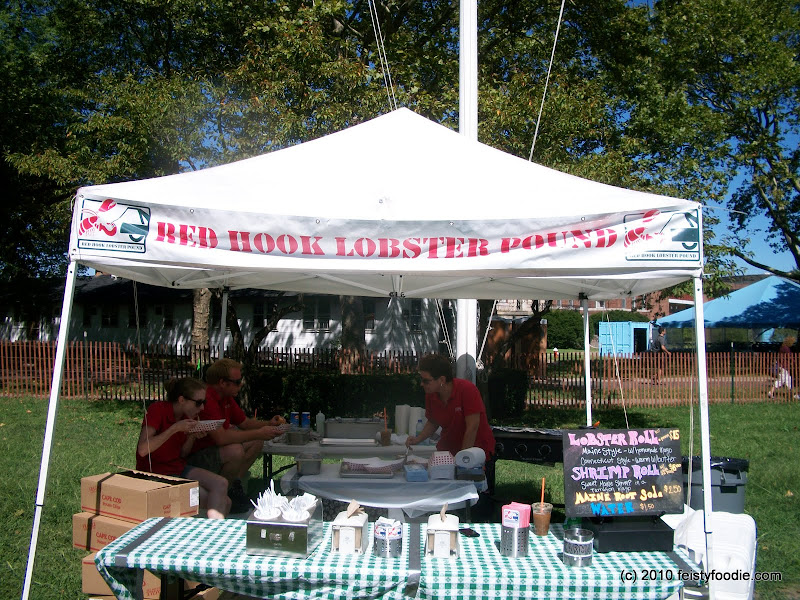 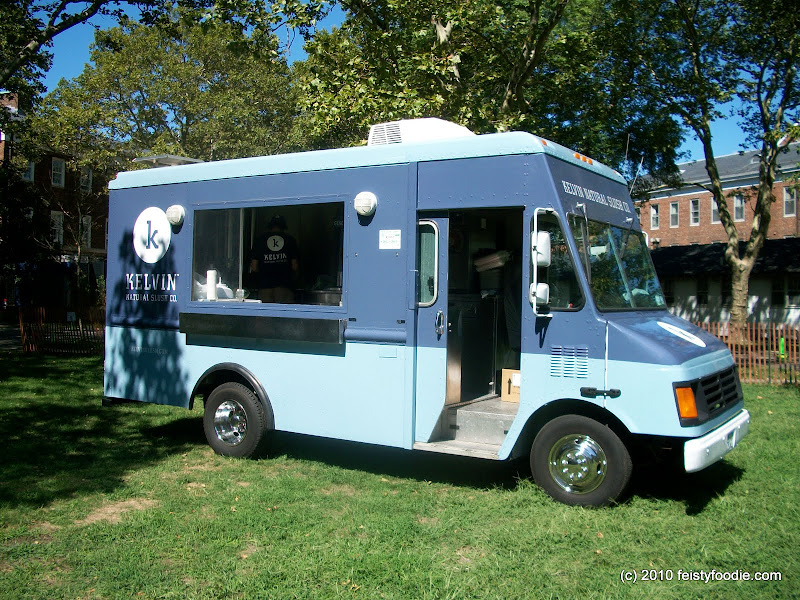 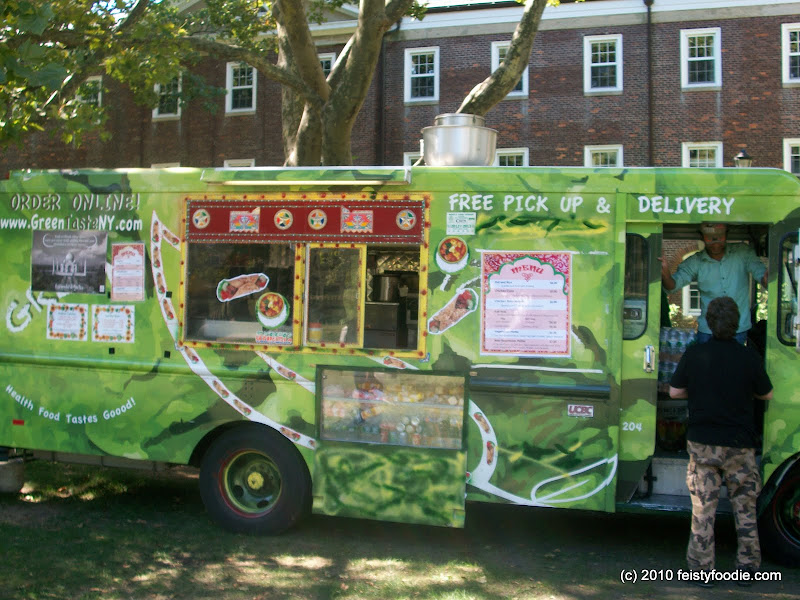 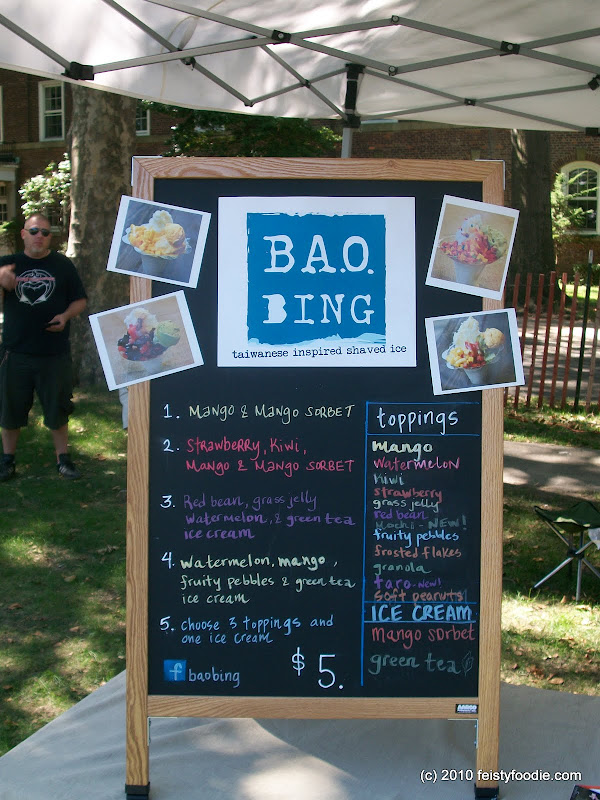 Rickshaw Dumpling Truck– everyone I know hates this truck, who actually eats from it? 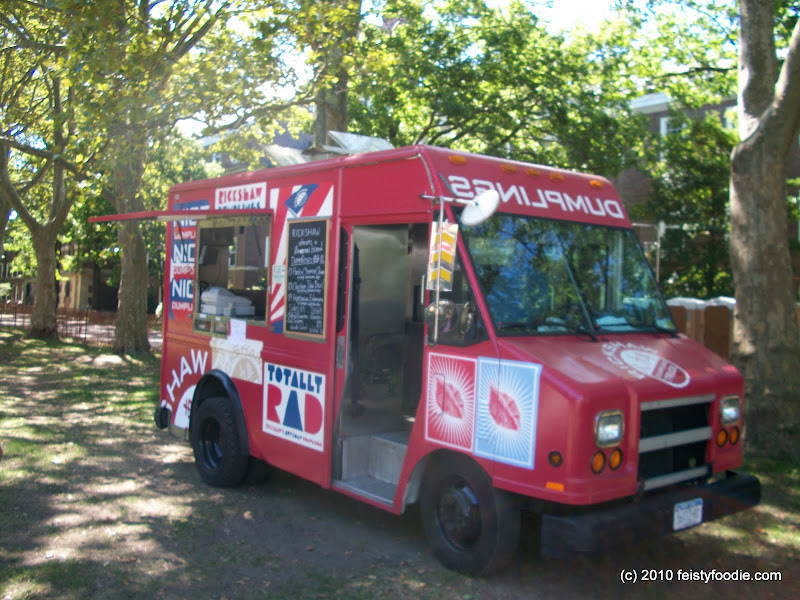 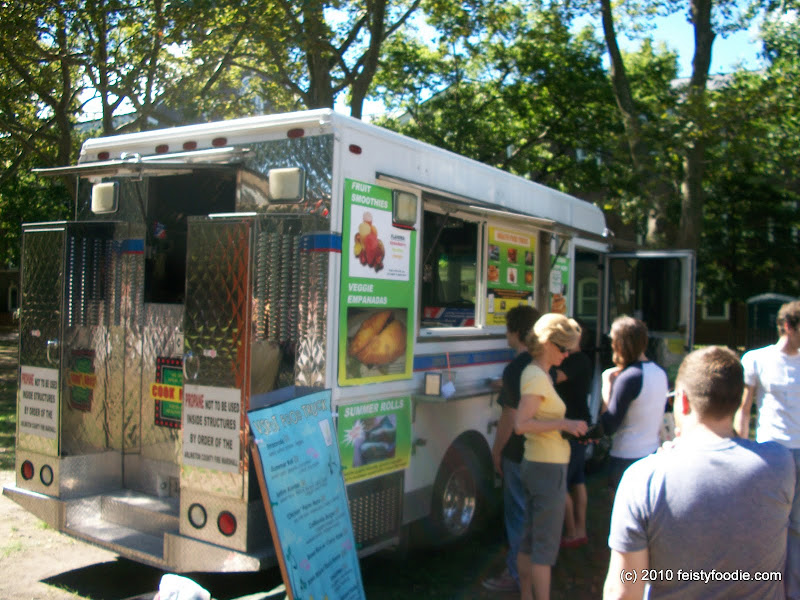 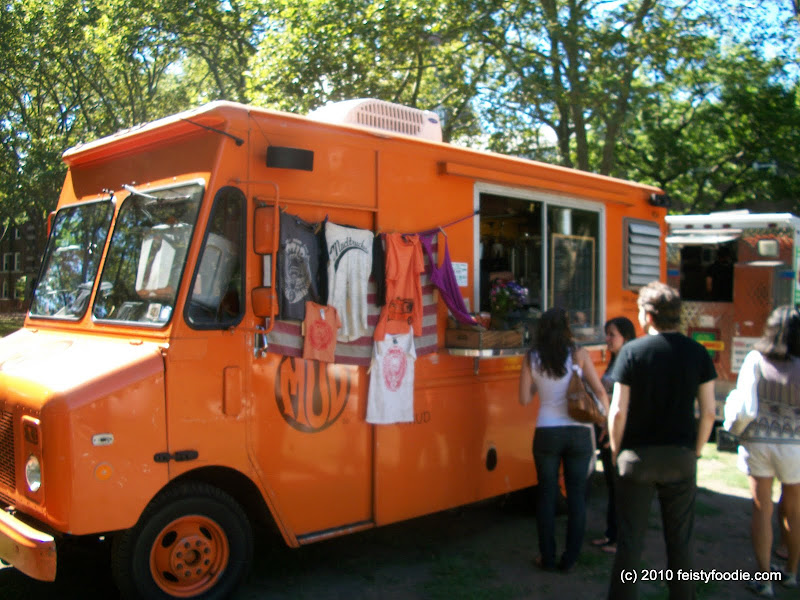 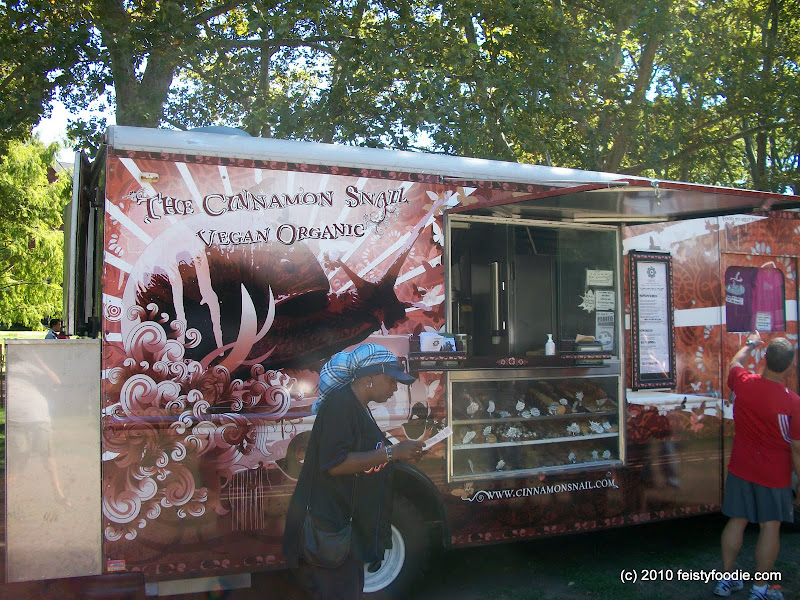 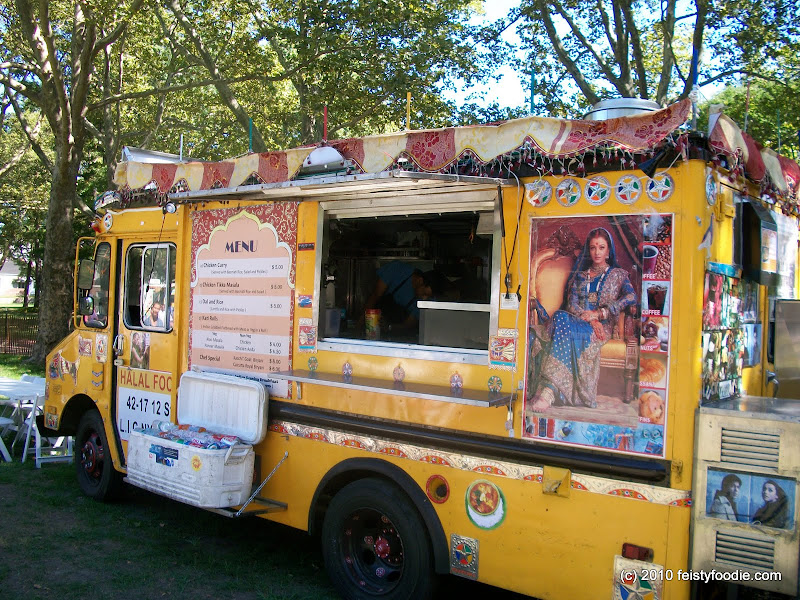 Van Leeuwen Ice Cream truck– I have no idea what they sell. Anyone know? 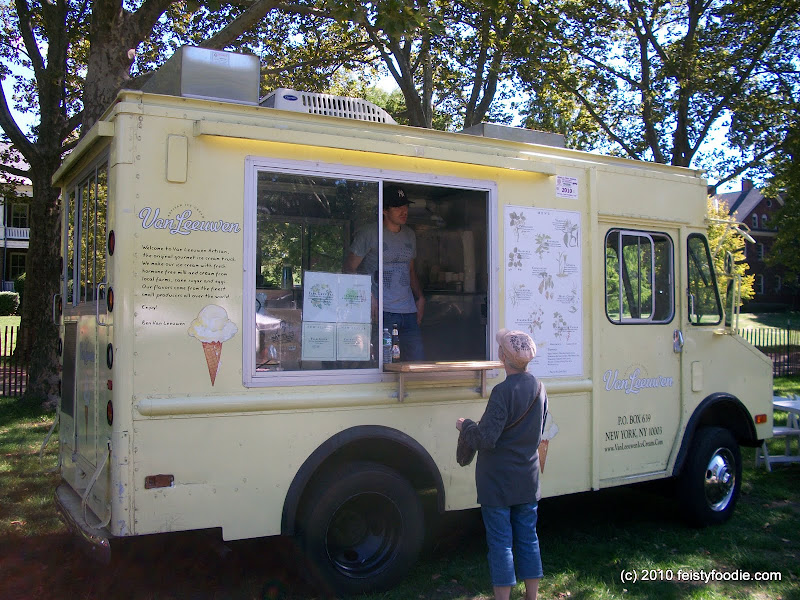 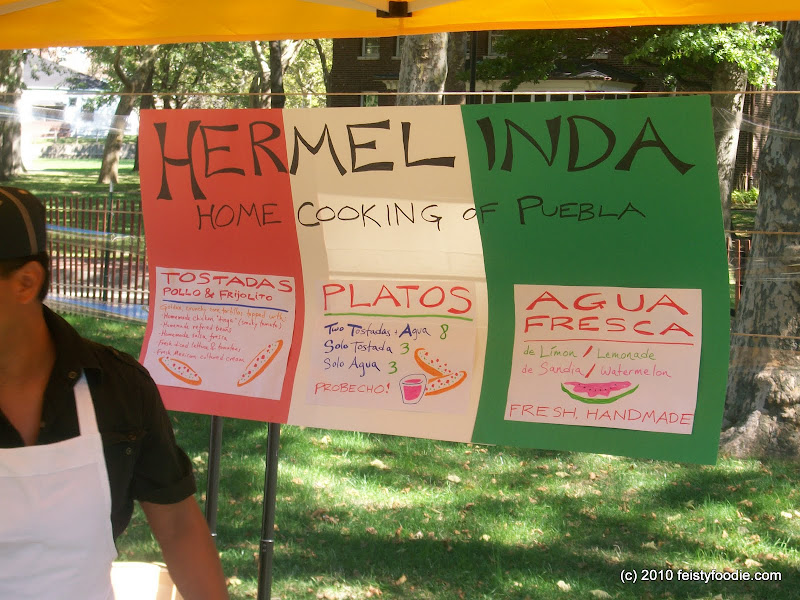 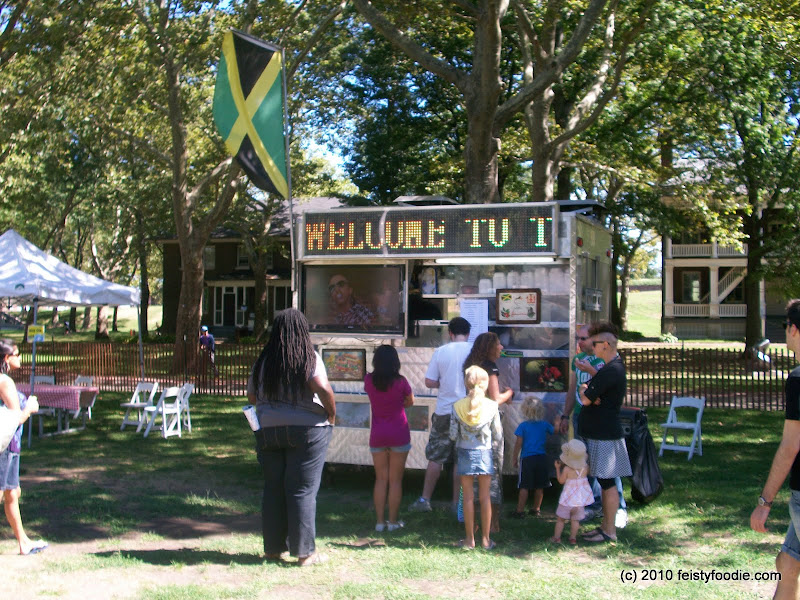 Also, Robicelli’s cupcakes had a table setup, but unfortunately no Yvo-flavored cupcakes were available.

My first stop was the Red Hook Lobster Pound. I got a Shrimp Roll and Lobster Roll for CT & I to share. Both were really good and had a ton of meat in the rolls. The bread was buttered and heated on the grill, which really adds to the whole experience. I thought $15 was reasonable for the lobster roll. When I got on the line there were maybe 10 people ahead of me. By the time I got the food, there was probably 50 people on line and growing. 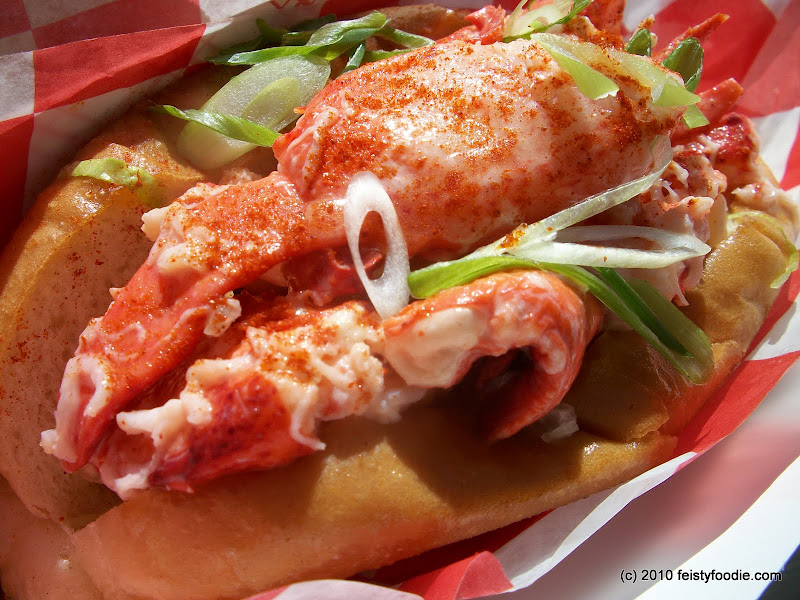 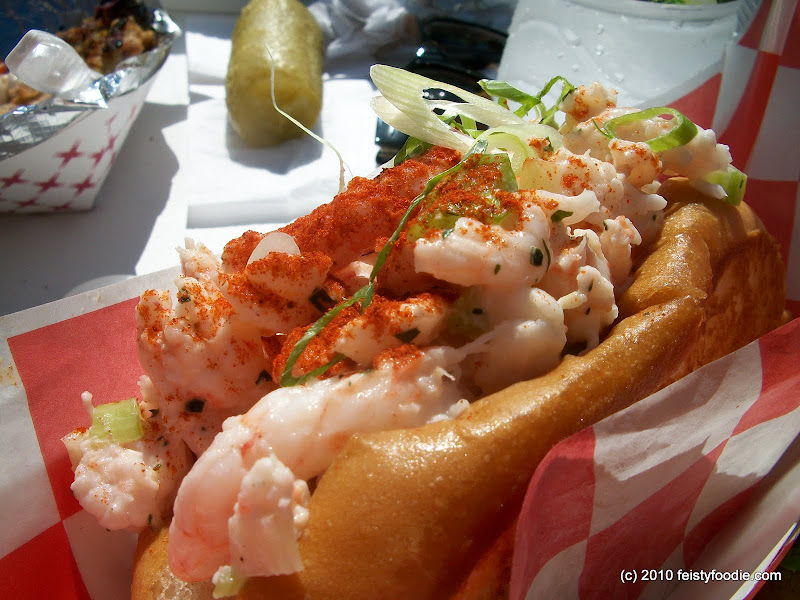 CT says: I really enjoyed both rolls. The rolls had a slight crisp to the outside while still soft on the inside. With that much lobster and almost nothing else – what’s not to like?! Even a few bits of scallions were a welcome crunch. The shrimp roll was also delicious, although hard to compare to the lobster.

CT waited on line for Hallo Berlin while I was at Red Hook. She got a mixed grill plate. It had a ton of different items. There were different sausages, potato pancake, pirogies, spaetzle, red cabbage, and more. It was pretty good, but super heavy and filling. 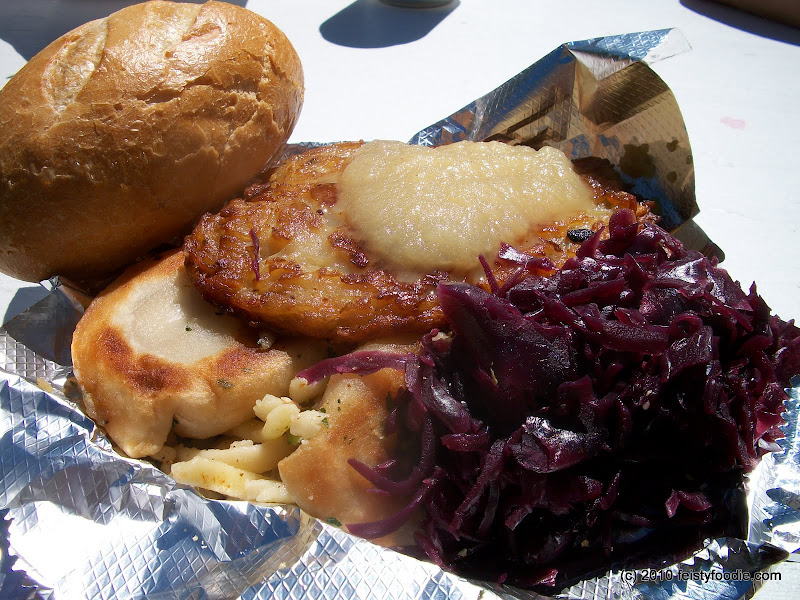 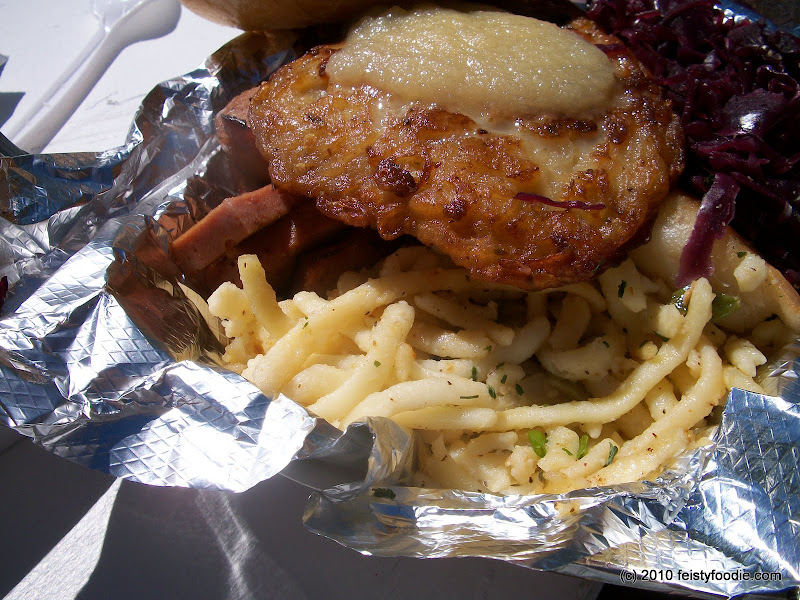 CT says: I’ve heard a lot about this cart, but have never gotten the chance to try it, so I was pretty excited! I was also happy to see that most of the items were pre-made, which I thought would mean a speedy delivery. However, they were heating some of meats to order, not as fast as I hoped, but completely acceptable. Most of the things were really delicious. I like the sausages (three different kinds hiding in there!) and various potato dishes. The red cabbage, which wasn’t initially included, was a bit of a let down; however not enough to spoil the dish. Overall, I was happy to get a tasting and would definitely order from there again when everything would be fresher.

My friend Matt started with the Jerk Chicken from Jamaican Dutchy. I didn’t get a picture before he happily gobbled the whole thing down.

He also got the Cantaloupe Creamsicle smoothie from the Green Pirate Truck. He liked it, but didn’t think it matched up to its $6 price tag. 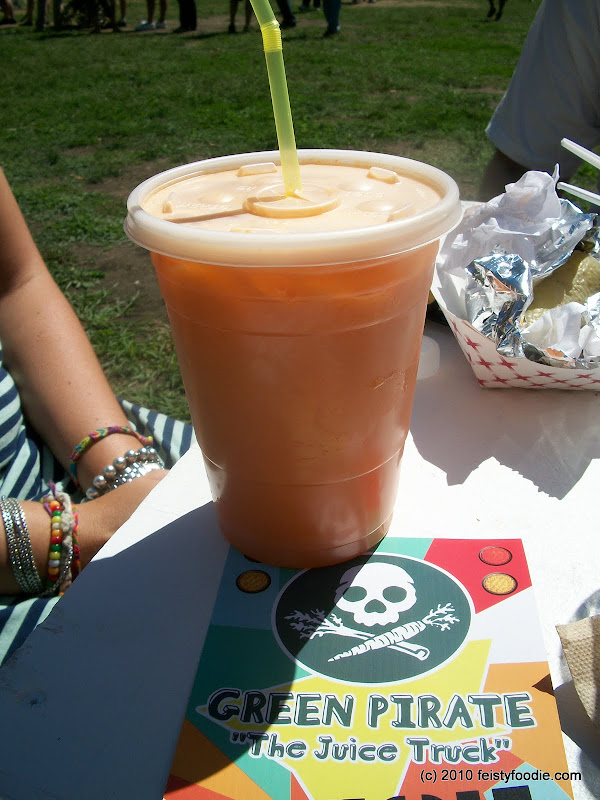 While we were eating, the lines continued to grow. 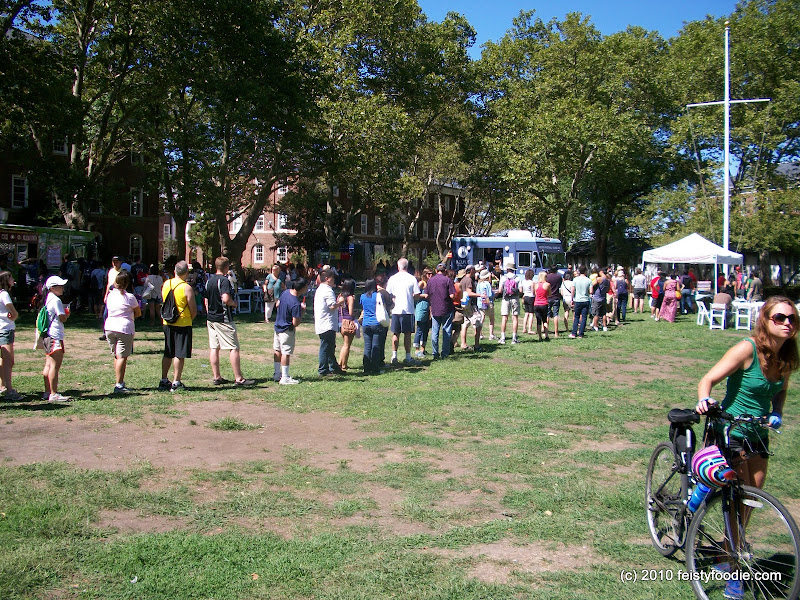 We next decided to check out Hermelinda for chicken tostadas and fresh watermelon agua fresca. The tostadas were ok. I am not sure if they are traditionally served cold since I have never had one before, but that kinda turned me off from it. The flavor was good, but could have used more spice. The agua fresca was much better. Super Watermelony! 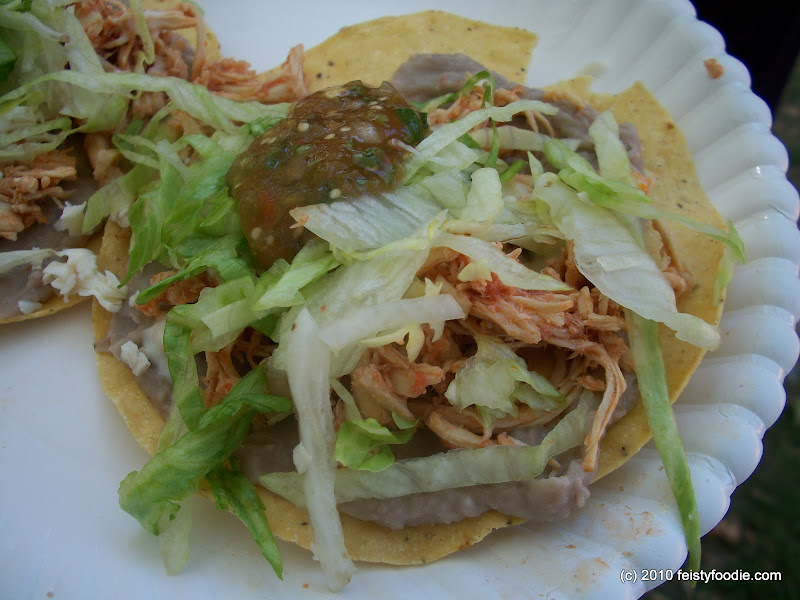 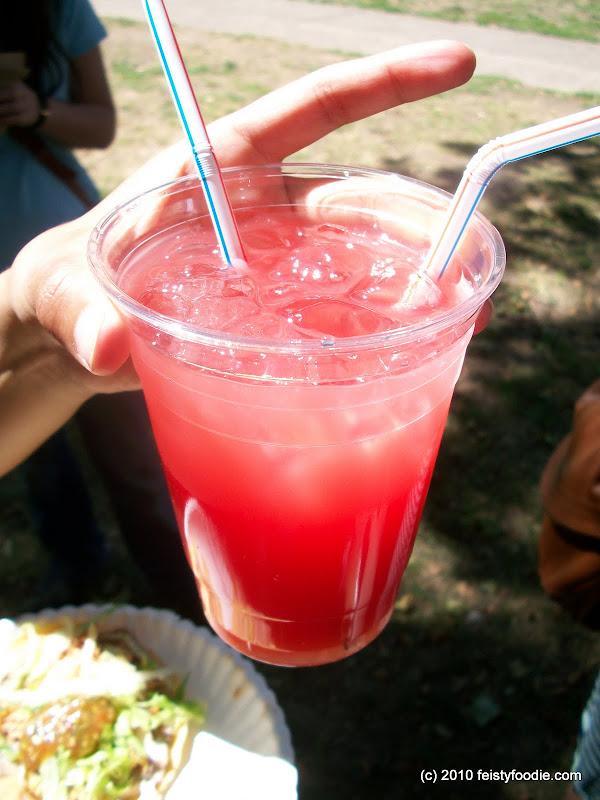 CT says: I agree. Not bad, but not great. I might try this cart again if they were making things fresh… and there were no other tempting offers nearby.

As we were getting quite full, we decided to get dessert and then head out.

The Taiwanese Shaved Ice at Bao Bing seemed like the best choice of desserts. We went with a scoop of mango ice cream, kiwi, strawberry, and mochi. It was quite good as neither CT nor myself have ever had it before. A great way to end our day here. 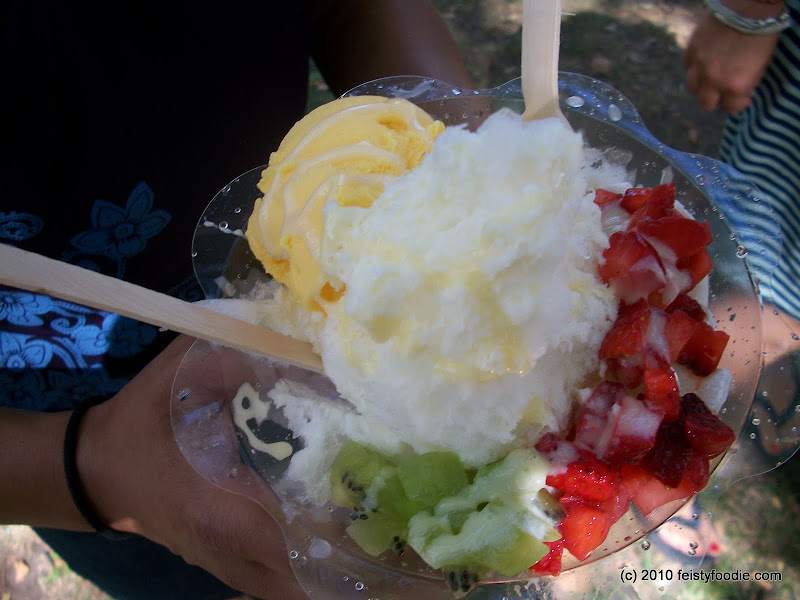 CT says: This was so much fun! I’ve had many varieties of “shave ice” before, but never like this. I liked the condensed milk they used on top for a touch of sweetness and the toppings all tasted pretty fresh too. There should be more of these places around!

The lines continued to be insane, so we were all too happy to leave for the ferry. 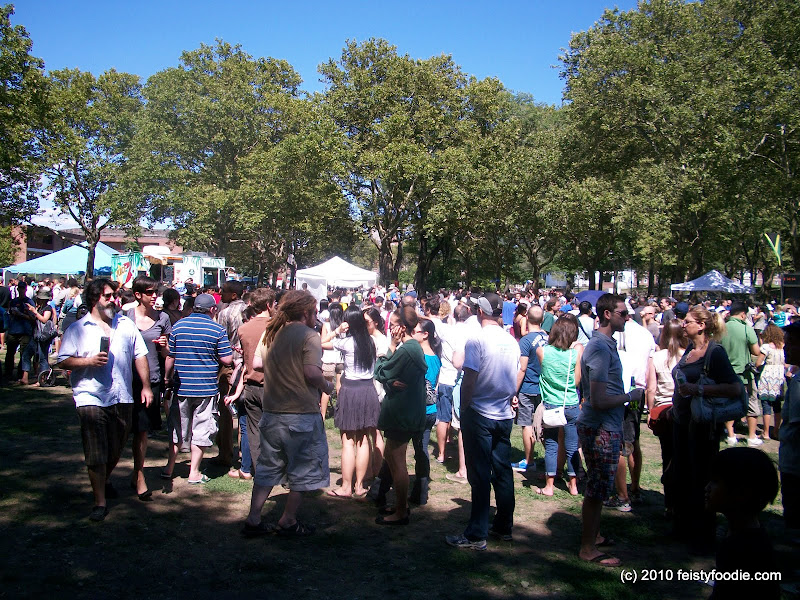 All in all, I am glad we went. We got to try some vendors we never had before, which is always good. Red Hook wins the prize as my favorite of the day. At least for the people who were stuck on long lines, it didn’t cost them anything to be there. Hopefully next summer’s festivals on the island will be run a lot smoother after all of the “experiences” had this year.