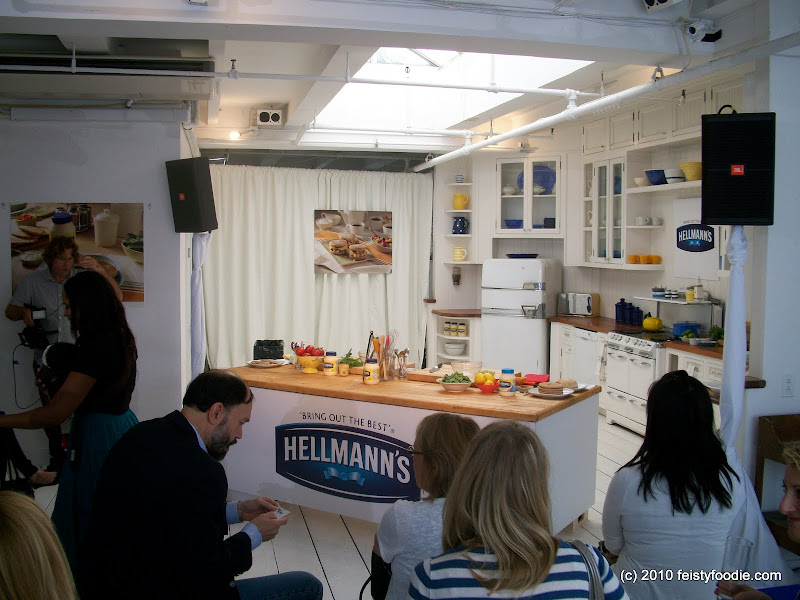 Yesterday, Yvo and I attended a presentation “Hellmann’s Back to School Mealtime Solutions 101” with Bobby Flay and Lori Loughlin aka Aunt Becky from Full House. The presentation was in a loft in the Fashion District, so I was able to take a bit of a longer lunch to attend. It was also nice to see some old friends and new there including Esther from Ambitiious Deliciousness, Cindy from Chubby Chinese Girl, and Andrea from High Low Food Drink. In addition to a presentation on a couple of quick and easy lunches, we were also told of Hellmann’s partnership with Share Our Strength. Check out their Facebook page for an opportunity to build your own virtual sandwich to help donate to such a worth cause. 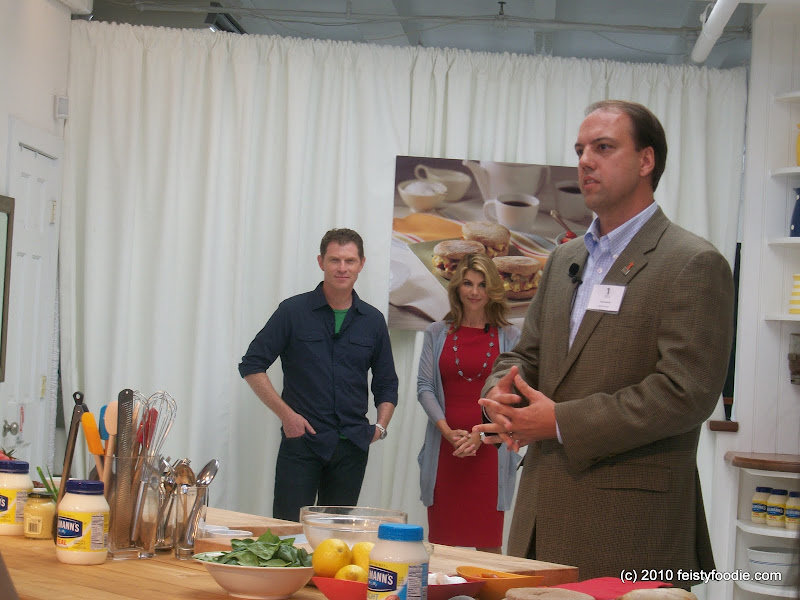 Yvo says: I arrived a few minutes late, but luckily TT was sitting next to Esther in the front row on the right side and had thoughtfully saved me a seat – his own. Yep, he gave up his front row seat to me – what a gentleman! – but unfortunately, this meant, with the picnic bench-style seating, as I sat down, I inadvertently mooned him (sorry!) because of this trend called low rise jeans…

I hadn’t missed anything, as it didn’t start for another few minutes. Cater waiters milled around, passing out glasses of water – sparkling and flat – with a twist (lime for sparkling, lemon for flat). Indeed it was a “lunch” event, but a comment by Bobby Flay later made me wonder if Hellmann’s is a dry company? He commented that cucumber water makes for great cocktails, and amended “Hellmann’s is going to hate me for saying that” – not entirely sure if that’s because it was unrelated to the product, or because they don’t drink. Either way is fine! I was honestly happy that there was an abundance of water being served- too often at these events, I wind up drinking sugary soda because it’s alcohol… or soda. Ech.

Bobby and Lori soon began the demonstration, after a bit of banter. They were very easy together, which was nice to see – I’d always viewed Bobby as kind of an arrogant jerk, based on his attitude on television – but he seemed relaxed and easygoing in person. Lori admitted that she’d never given a live food demo before, which didn’t really show – I guess all that time on television really makes getting up in front of people easy – except for her heavy hand with the mayo, and um, a salt incident that left the demonstrated fake-tzatziki too salty (we didn’t eat those). 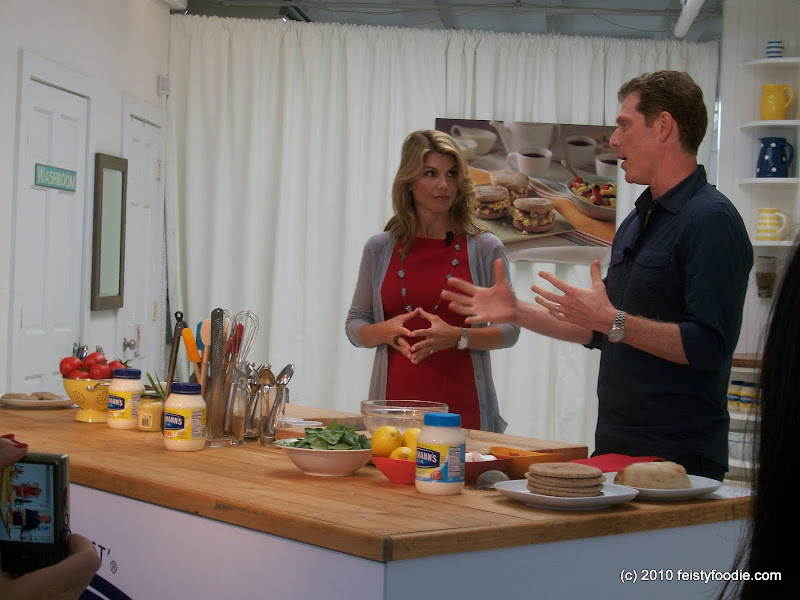 Bobby and Lori made three dishes with two different kinds of mayo. This was actually Lori’s first time presenting as a spokesman for Hellmann’s, AND her first live food demonstration. She did a pretty good job! I guess she did a good job of hiding her fear of the crazy bloggers in attendence.

First up was a take on a Chicken Gyro on a whole wheat pita. They used the Hellmann’s Light to make a play on the traditional Greek Tzatziki sauce. I was pretty impressed with Bobby’s knife skills in that he was able to chop and talk to us at the same time. He has been “performing” for years, so I guess all it takes is a lot of practice. As they were wrapping up the dish, we were all given some small bites that were made ahead of time. They were prepared open faced, which I am not a fan of. It is too hard to eat unless you put the whole thing in your mouth at once. I thought it was tasty and a good way to kick up the flavor on traditional mayo. 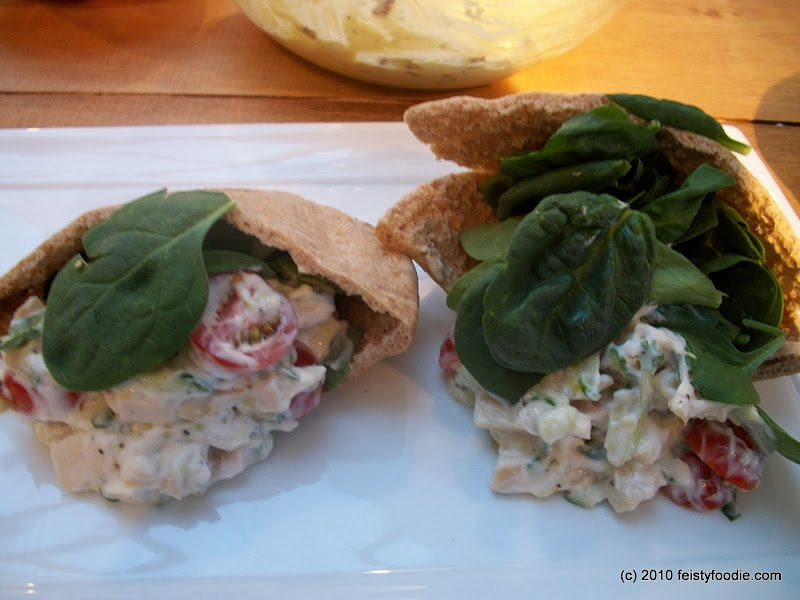 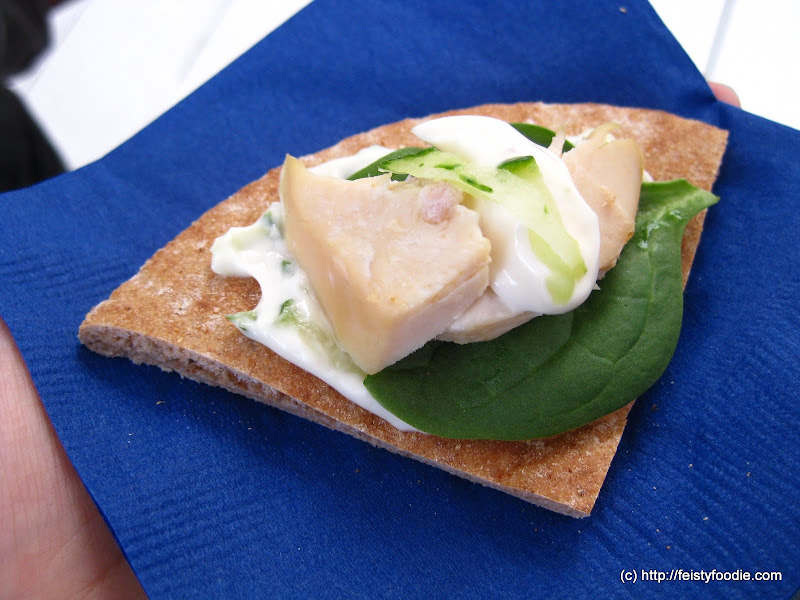 Yvo says: They used light Hellmann’s. I have to say, I actually do like and use Hellman’s at home and switched to light a while back because it tastes the same. Maybe I don’t use enough to actually taste the difference, but if you’re eating either by the spoonful, then you have other problems that half-fat and half-calories isn’t going to help. What went into the faked-tzatziki – mayo, shredded/drained cucumber, garlic, lemon zest and lemon juice, and too much salt. Bobby didn’t let her forget about the salt the rest of the day, haha.

Next was Bobby’s take on egg salad. They mixed the regular mayo with Dijon mustard with the chopped hard-boiled egg, sprinkled turkey bacon pieces, green onion and placed on a slice of tomato on top of cheese-covered English muffin. I hate egg salad! I never eat the stuff. I ate this though, mostly cause I was really hungry since it was lunch time. It was actually very good. It was another open-faced “sandwich.” 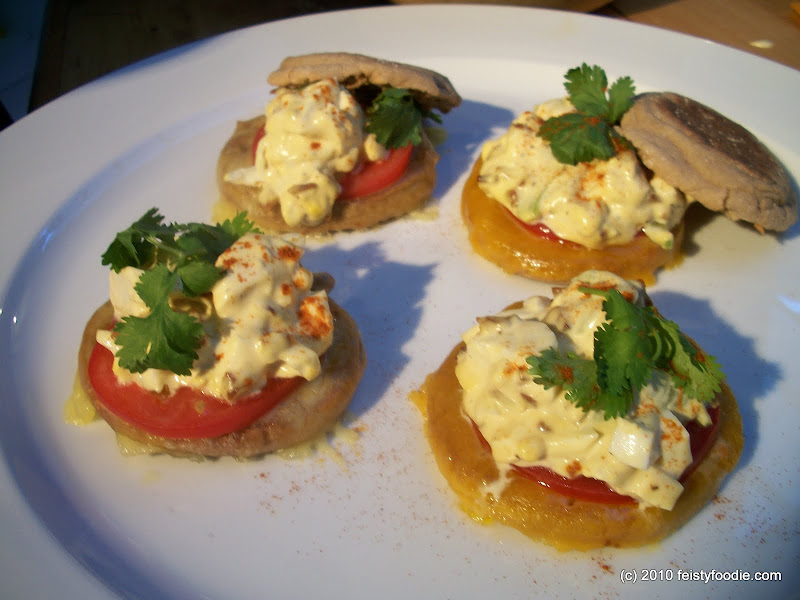 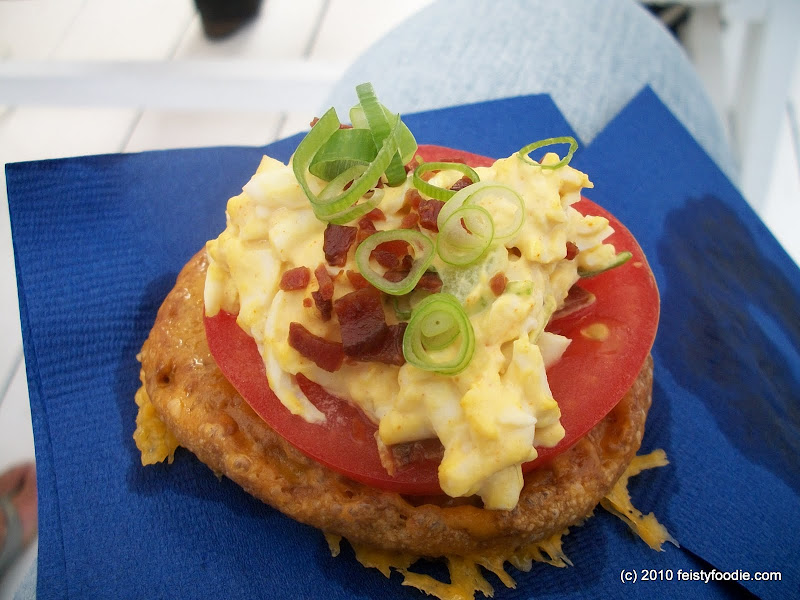 Yvo says: I really liked how crunchy and cheesy the bottom round (toasted whole wheat English muffin – I may start buying these now) was on the open faced egg salad sandwich, but it was piled way too high. Each bite I took left me with egg on my face- literally! Otherwise, it tasted fine, but there was a lot going on, so each flavor really had to fight its way out.

Finally, there was a version of tuna salad in a tortilla chip cup. This was a miss on all areas. It was just gloopy, dressed up mayo, with a bit of canned tuna in it. I am glad we only got one little taste of this. 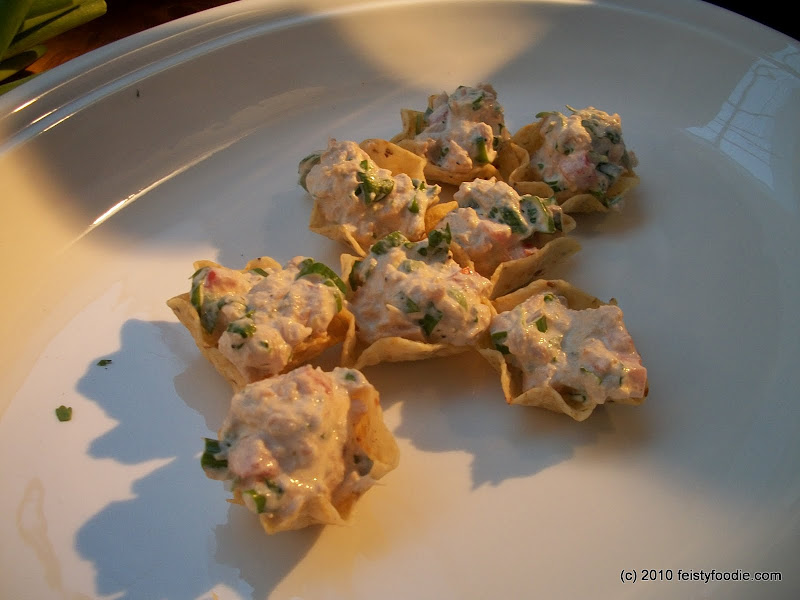 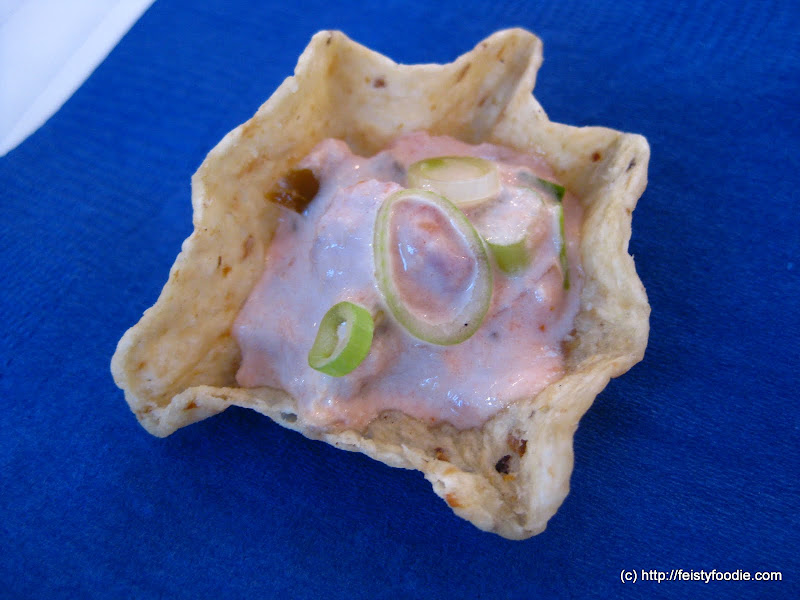 Yvo says: fish taco: I loved the concept of this, but I don’t think there was any tuna in my bite (pictured). I mean, it was just glop on a Tostito scoop. I will use this conceptually, and use good, large-flaked fish myself instead of canned tuna – which Bobby mentioned doing a few times – but the execution here was pretty terrible. I don’t think that was his fault – I think for accessibility, they made the recipe canned tuna, but all of us in the audience were almost certainly thinking that a nice white fish would have made for much better faked-tacos.

Interestingly enough – and not to complain about a free event, just think this is interesting – we were literally served one small piece of each. Which meant most of us left still hungry (a bunch of us wandered over to K-town to get some real food in us). One girl was determined not to go home hungry – she raised her hand to ask Bobby if there was anything vegetarian, because she was a vegetarian. I thought he handled the question with great diplomacy; he whipped up another egg salad sandwich (the other one had turkey bacon in it) for her, and delivered it to her himself. I don’t blame her for not wanting to go home hungry, but we all did, vegetarian or not, sadly…

All in all, a good event with some really fascinating information disseminated – Hellmann’s partnership with Share Our Strength, an incredibly important charity dedicated to making sure no child goes hungry; their nifty website to create and swap virtual sandwiches… all good stuff. I also thought it was really interesting that their light mayo is made with cage-free eggs, but didn’t get a chance to ask when the full-fat mayo will go in that direction as well.

A sad moment that hopefully will encourage you all to go [create/share/swap virtual sandwiches] (each sandwich made = a donation from Hellmann’s)… the guy from SOS (whose name I forget, sorry!) told us about a program in the South during the summer where children get lunch for free. One child asked if they could put mayo on only one side of his sandwich. I started smiling here, thinking how cute it was that a little kid would be so specific about his sandwich, but the SOS guy continued, “because I save one slice of bread, that’s my dinner.” I literally teared up and had to pretend something was in my eye… it’s so sad and unbelievably unnecessary for children in this country to go hungry, when we have such an overabundance of food and resources with which to feed them.

After the presentation, Bobby & Lori were kind enough to pose for pictures with each of us. Of course, I passed, but Yvo took one for the team. 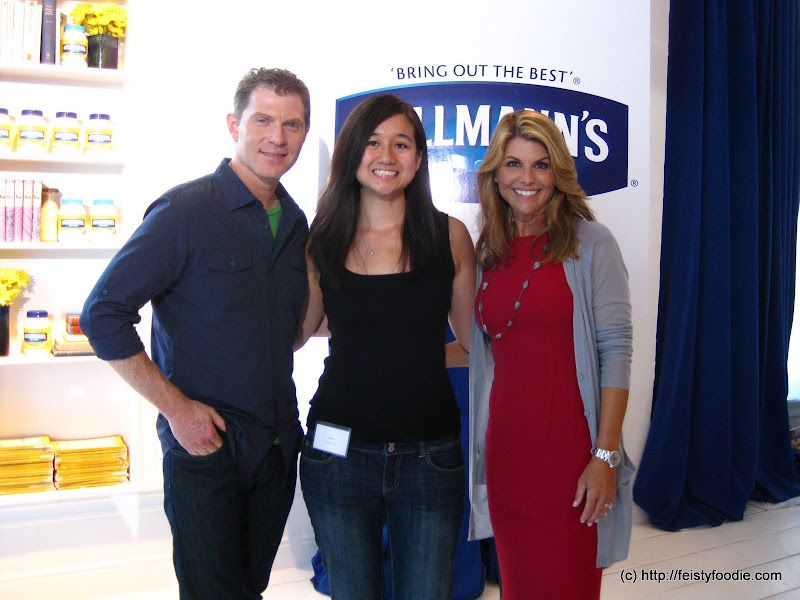 On the way out, we were given quite the hefty swag bag. It had a copy of Bobby’s Mesa Grill cookbook, a teak cutting board, plastic sandwich holder, a set of 4 tapas plates, a 4gb thumb drive, 2 knife spreaders, the Hellman’s lunch box, and obviously a jar of Hellmann’s mayo. I know I shouldn’t look gifthorses in the mouth, but I would have preferred the low-fat version. It tastes just as good as the original, but is a lot healthier. 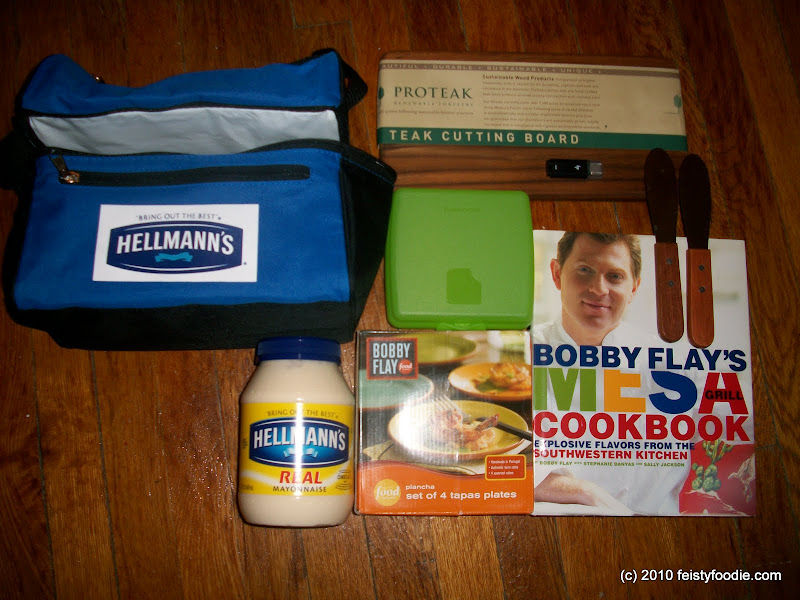 Thank you to Bobby and Lori for the entertaining presentation. I would also like to thank Meg for the invites.

Please note that this meal was courtesy of the Hellmann’s PR. I received no monetary compensation for this review, nor was I obliged in any way to post about this meal, positively or otherwise. This is my own opinion and I feel it was unbiased; you are free to take from this what you will.