It has been a while since our cooking class got together, so we took an opportunity to go for dim sum. It is one of the best places to go as a group. I am no longer a dim sum virgin, but there were a couple of people that were. Since they were cooking class people, we didn’t have to worry about them getting turned off by the more unique items offered. We got there early(i.e. before noon), so there wasn’t too long of a wait. Going for dim sum after 12 is just asking for trouble. The best thing about dim sum: as soon as you sit down, you already are getting food on your table. 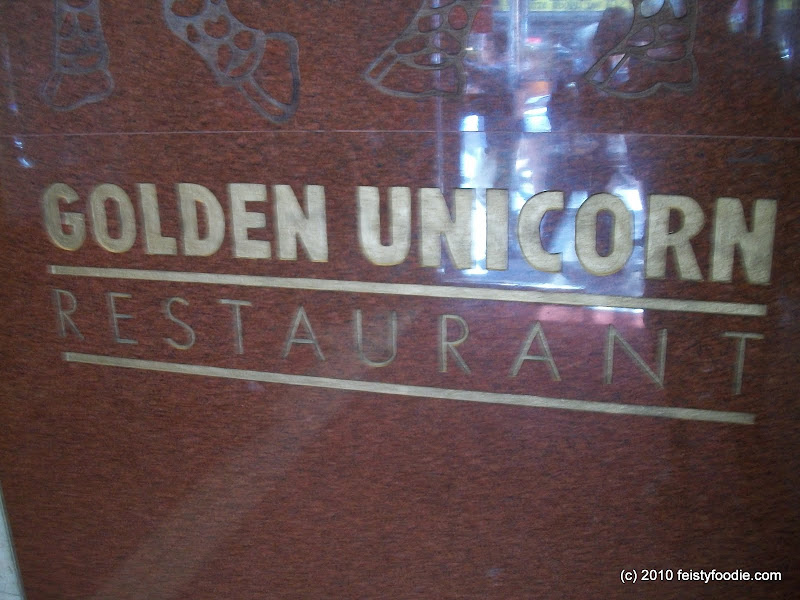 Chicken Feet. I eat these more for the novelty, but still tasty. 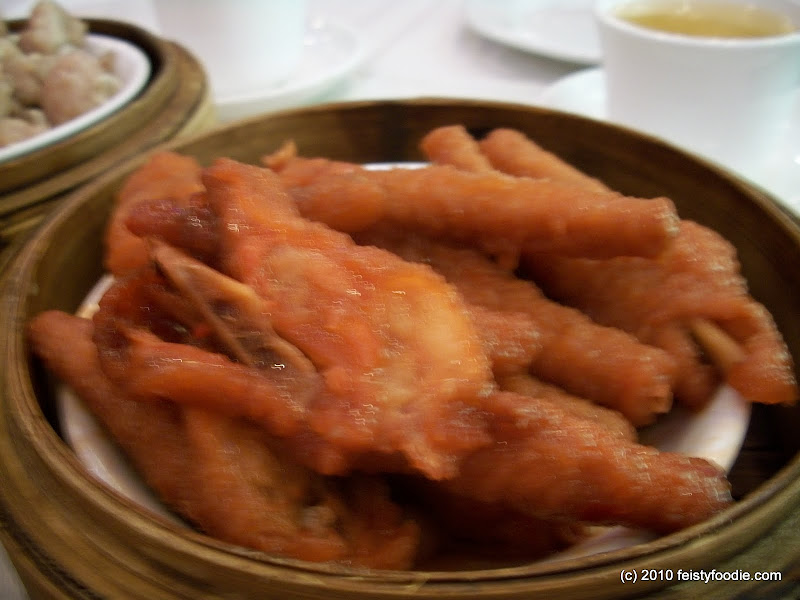 Tripe. My dim sum experts are currently in a heated debate on whether it was pig or cow. My first time having tripe. It reminded me of calamari in texture. 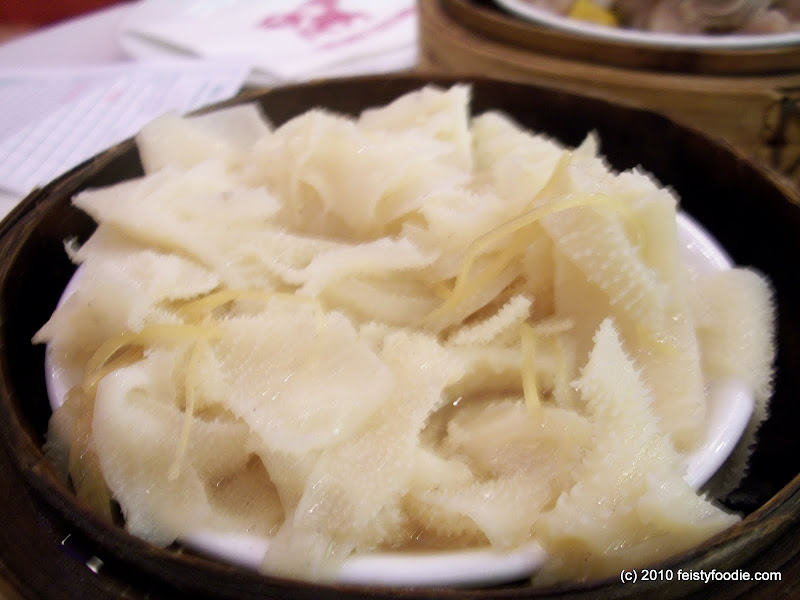 CT says: After many years of eating dim sum this was also my first tripe experience. While I’m glad I tried it, I probably wouldn’t order it again just for myself. I didn’t think it had much flavor to it and the texture didn’t win me over. However, if it was prepared in another way, perhaps deep fried, I’d probably give it another shot! 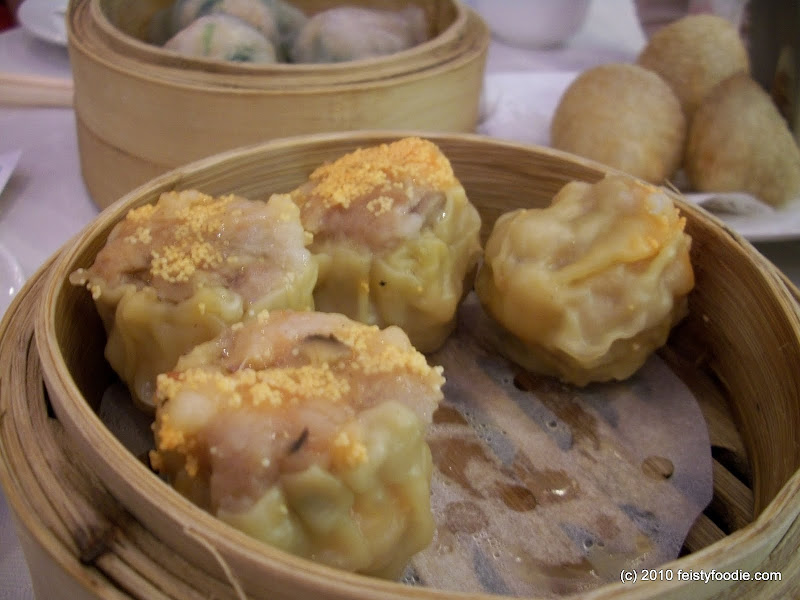 Shrimp & Chive dumplings. It may have been watercress. 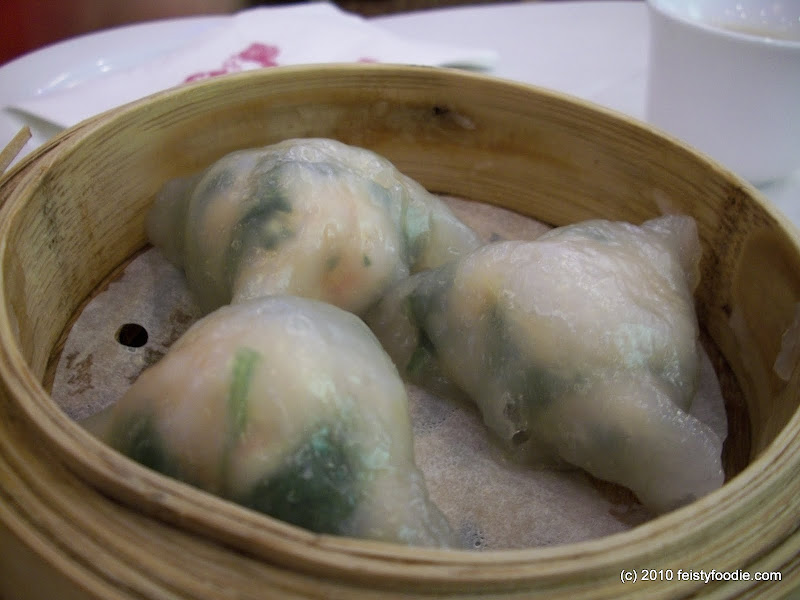 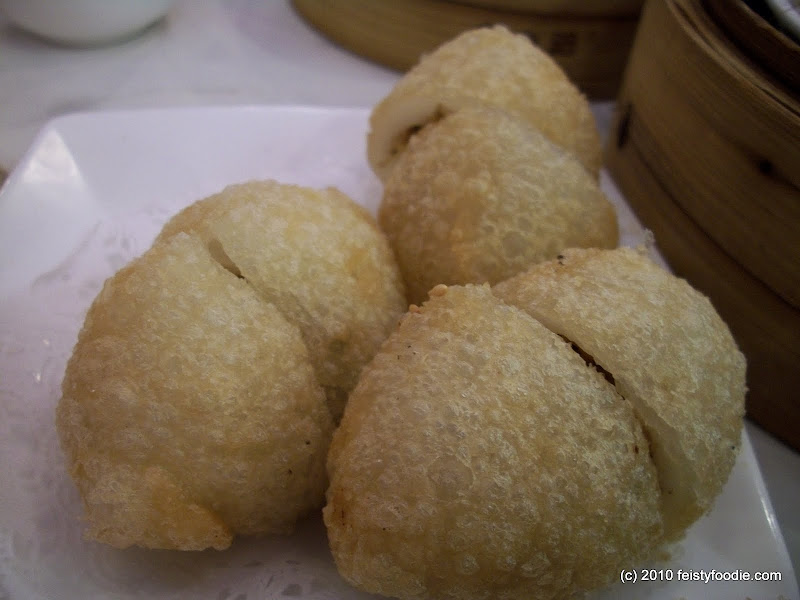 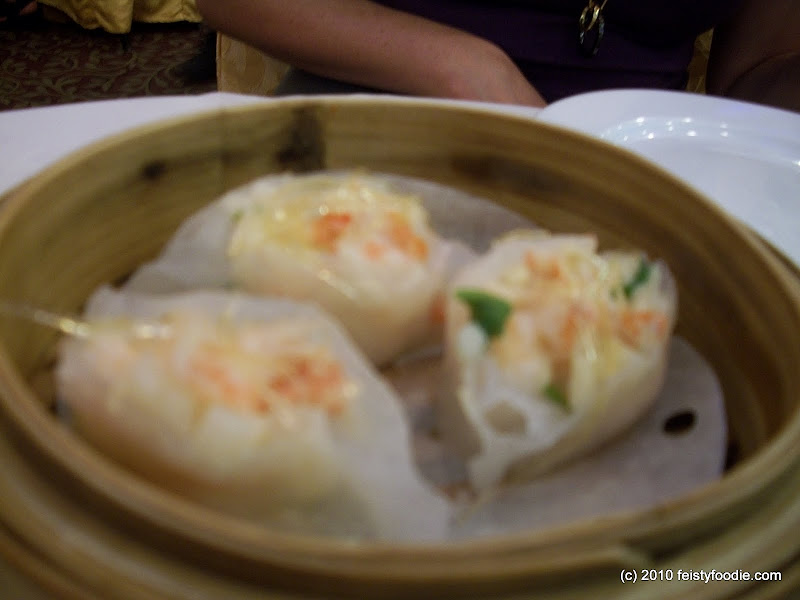 Steamed Pork Ribs. We had these last time. I had a couple but am not a huge fan, too much bone, not enough meat. We had a lot of this leftover, so I don’t know who took it off the cart. Strange. 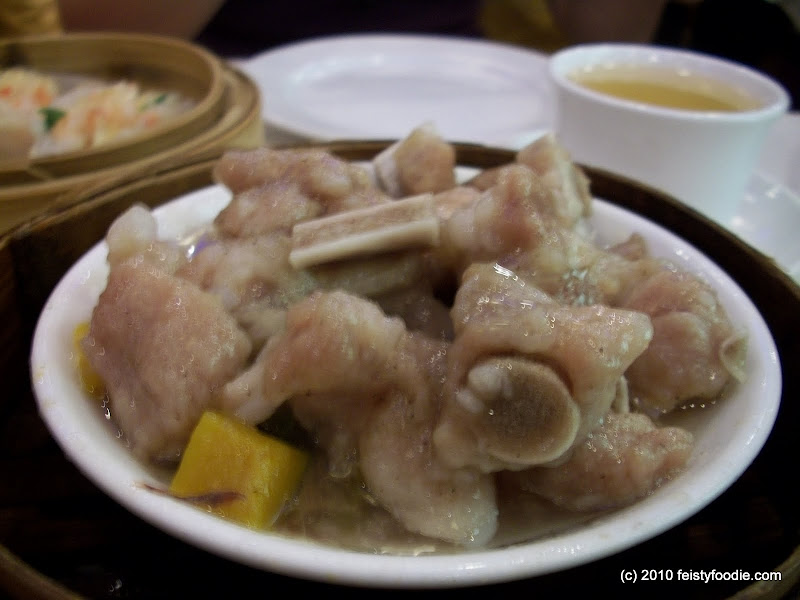 Garlic & Jalapeno Fried Shrimp. These were really good. I ate them whole. Every bar should offer this as a snack while watching the game. 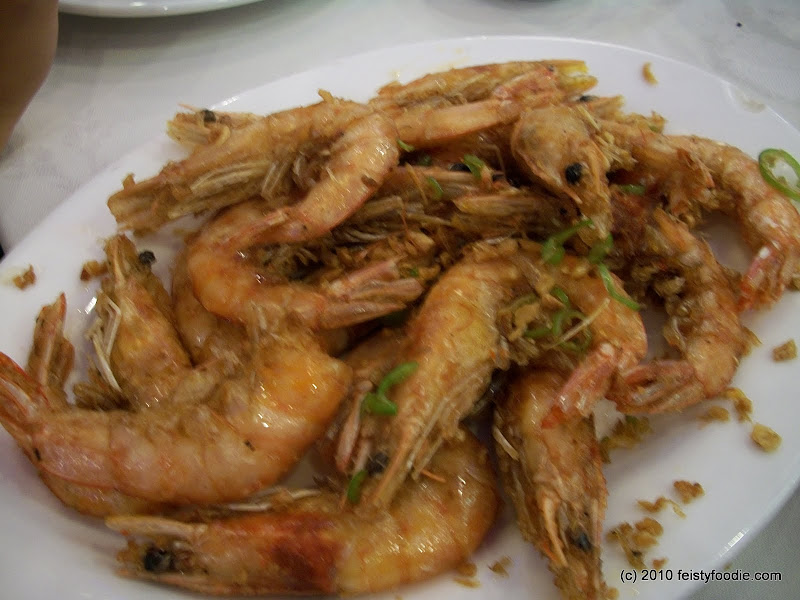 Tofu Skin wrapped mushrooms, bamboo shoots, and other things. It was ok, but hard to eat as it was slippery from the gravy. 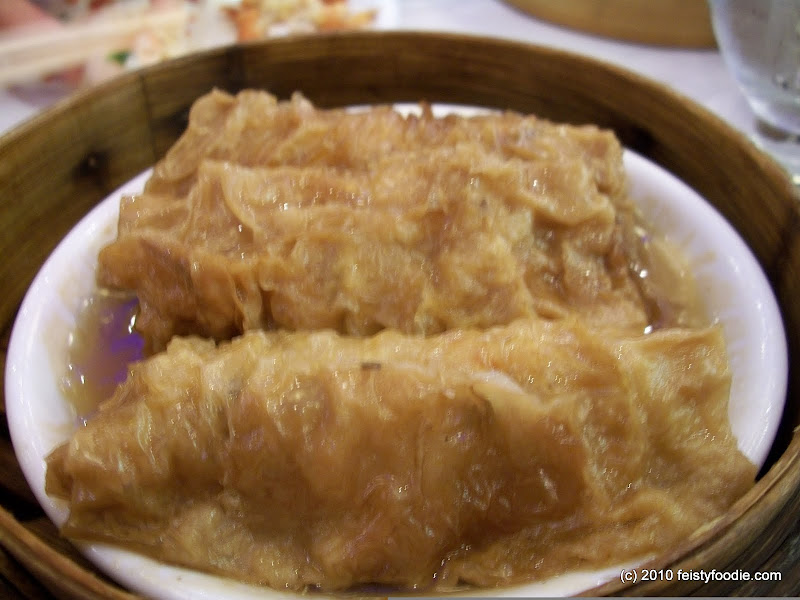 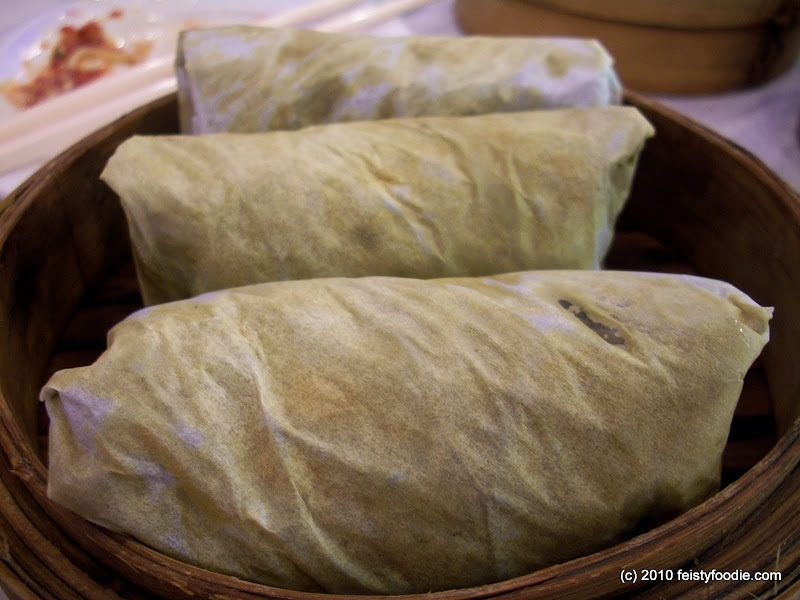 and now OPENED. Another of CT’s favs and now one of mine too. 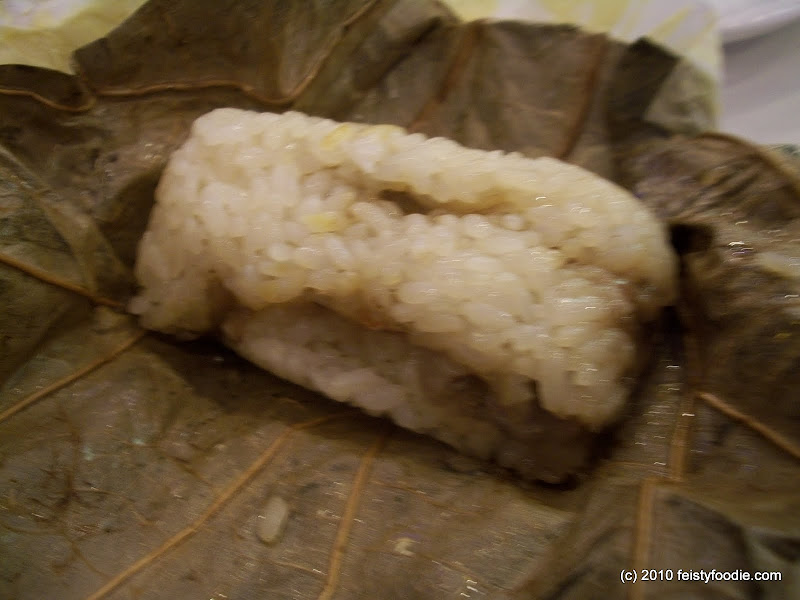 CT says: I’ve never gotten three mini-rice pouches in one steamer before, usually one large or 2 mid-sized ones. I’ve also never seen the parchment wrapping. I’m not sure it was an improvement, although I suppose it ensured more meaty-innards for each bite.
.
Roast Pork Buns and innards! NOMNOMNOM (to quote our friend Dean)
CT says: The innards are a little sweeter than other places, but still delicious! 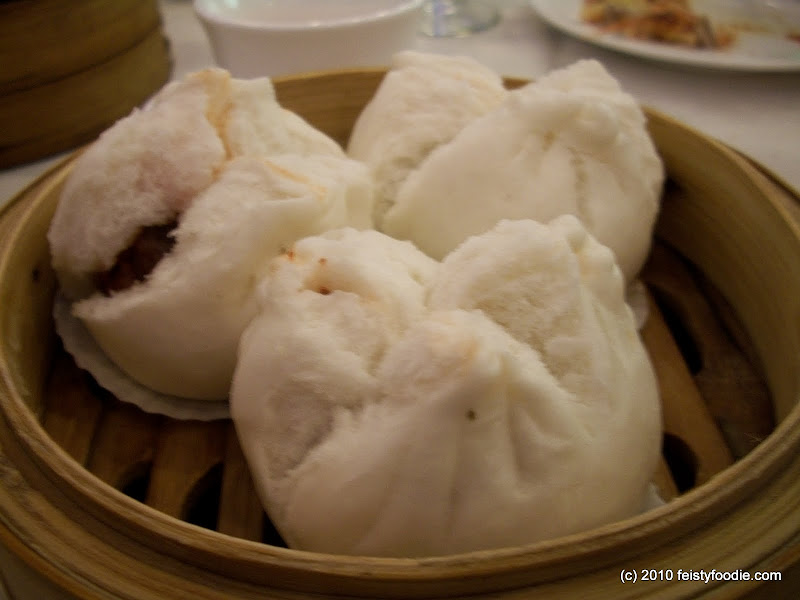 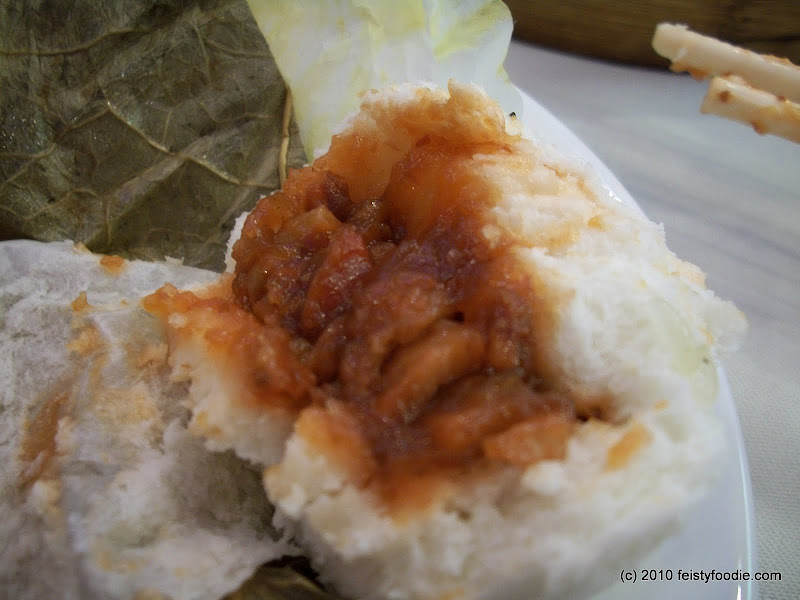 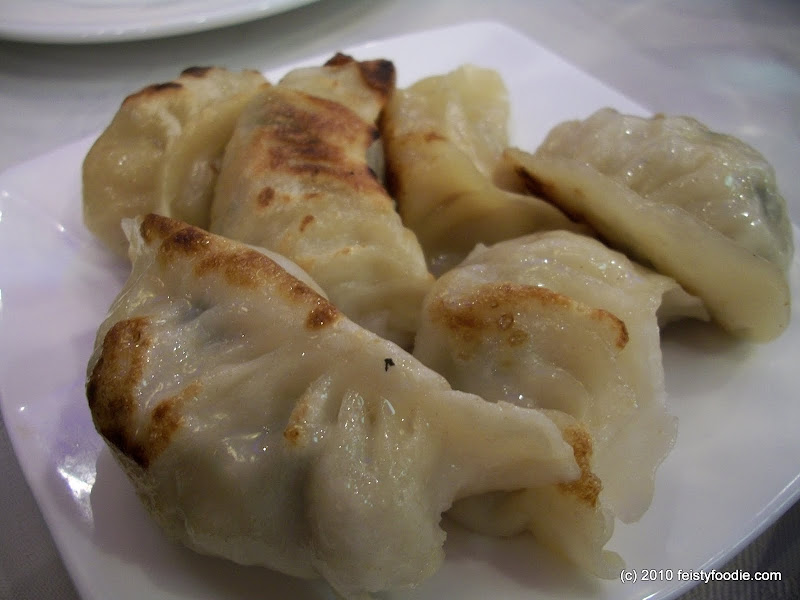 Rice Noodle Roll with Shrimp. Yes, ANOTHER of CT’s favorites. She likes dim sum a lot! Get over it. Pretty yummy! 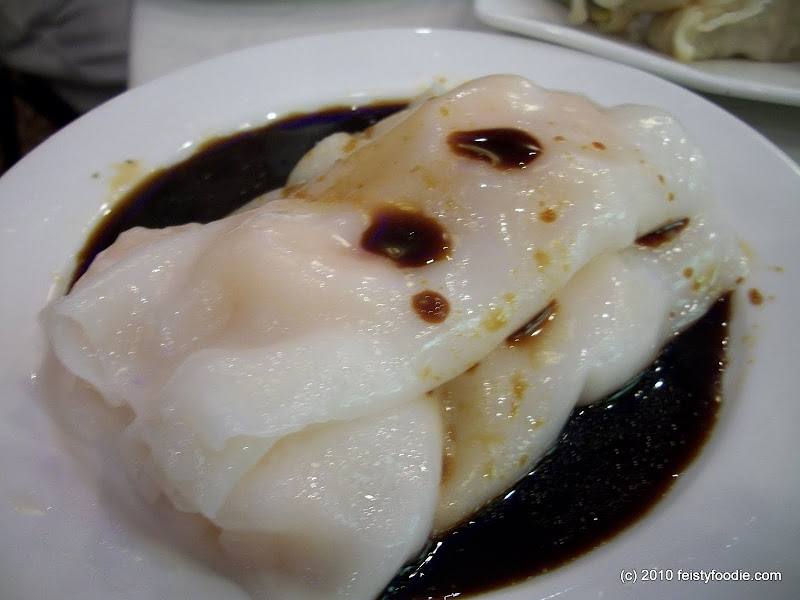 CT says: I just love the sauce it comes in – the whole dish is light and fresh!

Shrimp & Chive Fried dumplings. This one of my favorites of the new dishes. The wrapper was a lot thinner than the other dumplings and filled with a lot more veggies. I believe there were bits of pork in it too, never a bad thing. 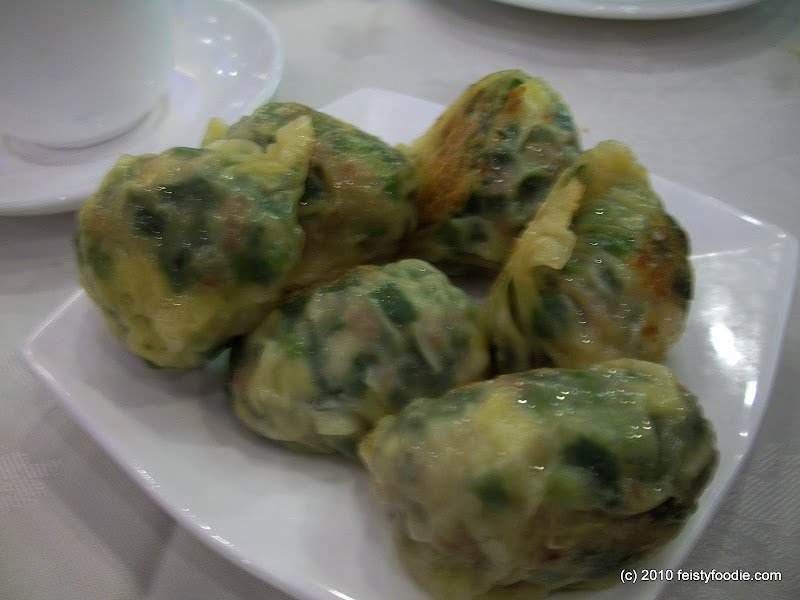 Daikon cake with chinese sausage and oyster sauce. This was ok, never had it before. 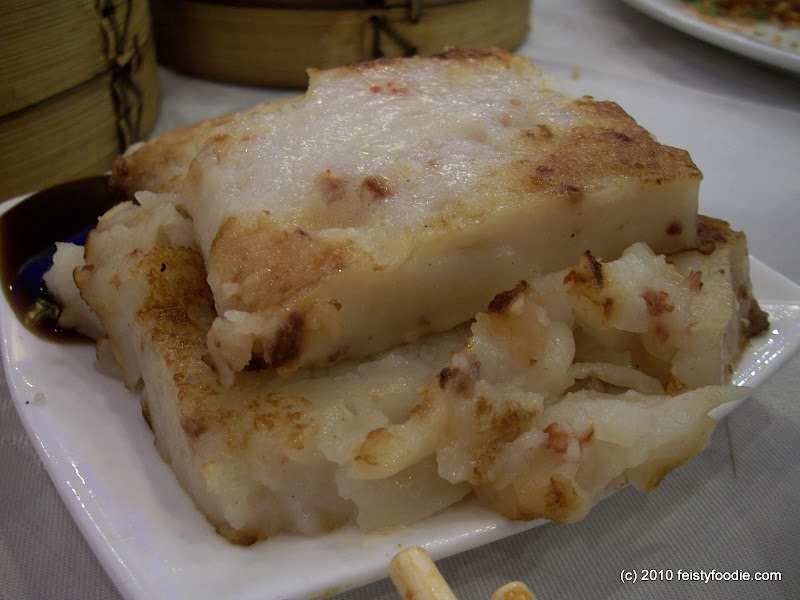 CT says: These were not quite what I was hoping for. In some places, these have a softer, more delicate texture and flavor and I love them! Unfortunately, this was not one of those places. 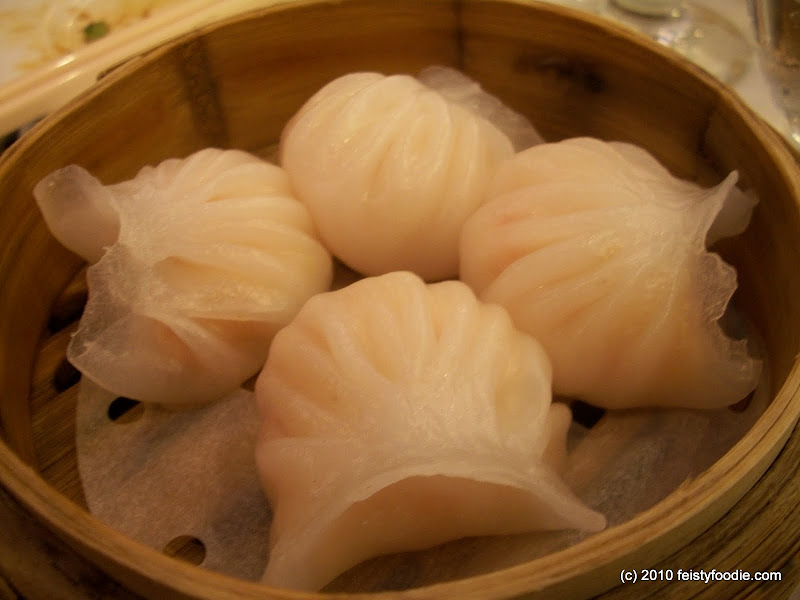 Even though we were all pretty full, when the peking duck cart came by the table Aimee’s boyfriend was the most vocal I have ever heard him and insisted we get some. I think the restaurant did this on purpose, how could you not get some of that duck? 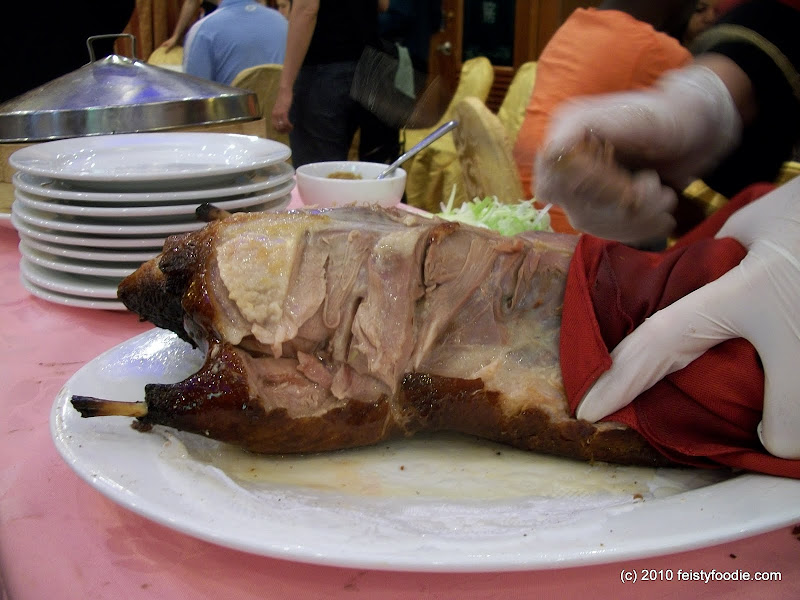 Peking Duck Bun with scallion, cucumber, and hoison. SO GOOOOOOOOD! I am glad we didn’t pass this up.
CT says: I can’t believe I almost passed on eating this – it was delicious and a perfect ending to the meal! 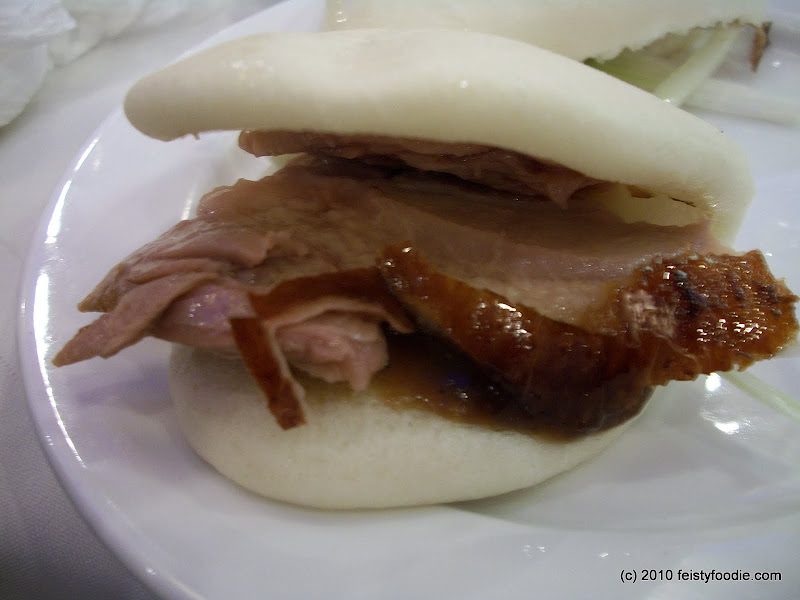 All in all, Golden Unicorn is a great dim sum restaurant. It ended up being $16 including tax and tip for the 6 of us. Although there are some of you out there that would say that is expensive for dim sum, I say it is SUPER cheap.