I don’t bake.  You know that.  I know that.  I’m fine with it.  But I still try, every so often, because BF loves sweets, and like 90% of sweets are baked, right?  Anyway, I stumbled upon this recipe recently in a magazine and decided, what the heck.  Let’s give it a try.  (And if I were an actual baker, I might try using my own dough, but as it is… I’m not!) 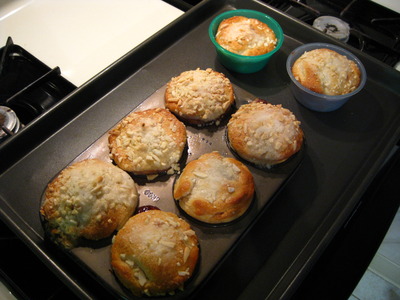 My muffin tin was only 6, so I used two silicone ramekins to bake the last two. 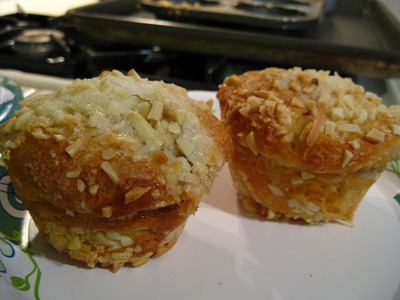 Fresh out of the oven.  Remember, they contain jam and cream cheese that’s been heated, which means they will be very hot. 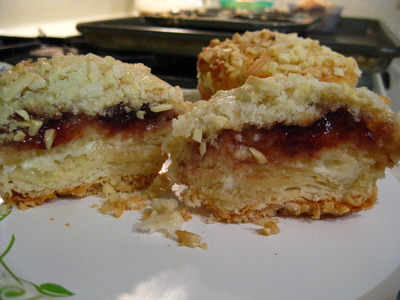 I had to prevent BF from jumping in and eating one too quickly, lest he burn his throat (I can’t even imagine the pain!). 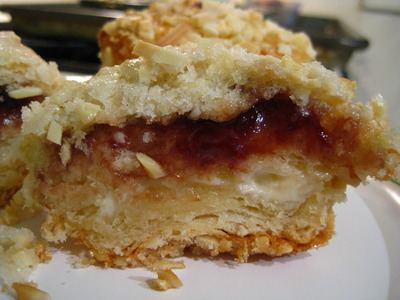 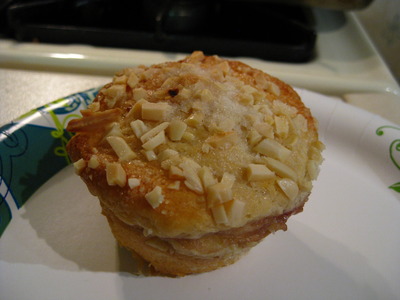 Well, it received the BF seal of approval. 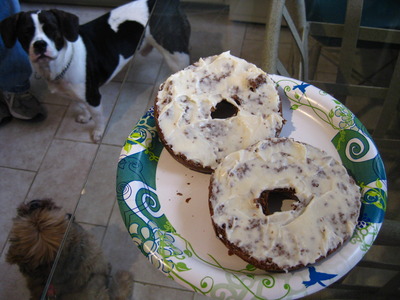 I’d made a little too “much” cream cheese, so the next morning, I toasted a pumpernickel bagel and slathered it in the remaining cream cheese.  A bit too sweet this way, but I think it was so easy to make, I should make flavored cream cheeses more often – let soften, mix with whatever you like, voila.  Almond extract, a touch of sugar, and there you go.  Easy enough to fancy up a brunch menu… 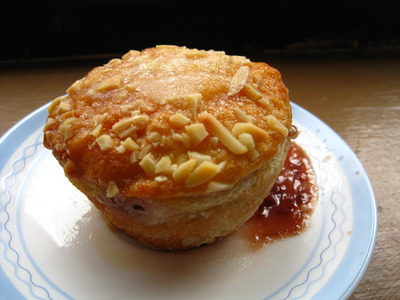 Of course, since I wasn’t having a brunch party or hosting people, I had leftovers.  Reheating – I popped one in the microwave for 30 seconds and it came out chewy… hard in weird spots… so I don’t know about reheating.  I meant to give it another go but when I went to get one from the fridge to reheat… there were no more.  Oops!

The recipe can be found here – I really only changed the kind of preserves I used, to strawberry, so I don’t feel comfortable posting the recipe here.  I had some trouble with peeling apart the layers in semi-even pieces, which probably resulted in some uneven innards on some of the muffins, but that didn’t seem to be such a big deal in terms of flavor.  An important step definitely was the crusting part – dipping each piece into sugar + almond mixture, which gave the outside such a nice crunch, which BF commented on, as did his father, PopPop.  They liked them.  I’ll be making them again as a fairly easy and moderately quick dessert/snack sort of deal.