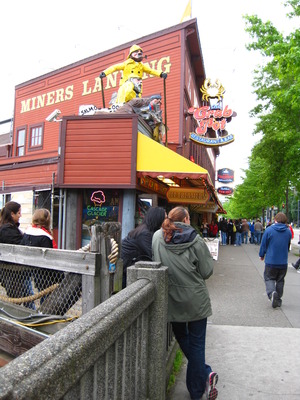 My darling friends HB and Dr. PB actually went to Seattle last summer when our first attempt to go to Machu Picchu fell through, but I was unable to join them.   When they’d returned, they described this restaurant where you ordered a feast, and a whole bucket of seafood was tipped out onto the table in front of you… for you to… nom your way through. 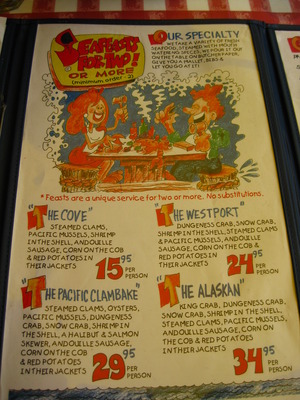 Since then, The Crab Pot has been featured on Man v. Food, but when I went, I looked through the seafeasts and discovered not only were they for two, but… I didn’t like anything enough in each one to justify ordering it.  I would be just as happy ordering my own components separately and eating them like that.  So I did. 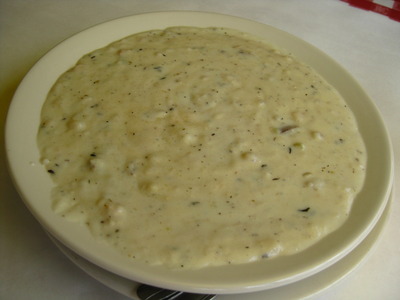 First up, a bowl of creamy clam chowder. 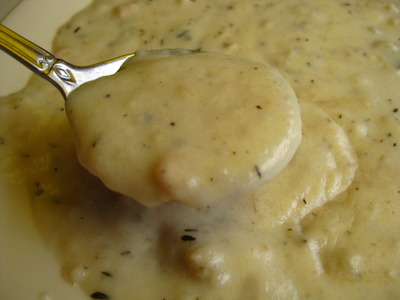 Nommably thick, lots of clams, potatoes, and a lovely clam flavor throughout, I really enjoyed my bowl of chowder.  REALLY good. 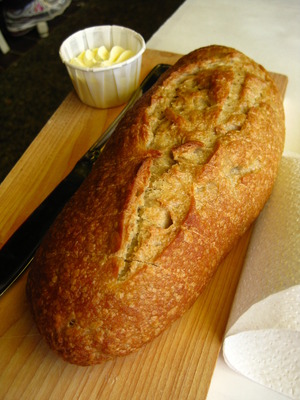 Funny enough, as I sat there, I noticed everyone around me receiving bread when they ordered.  I texted a friend (I tend to text when I eat alone, while waiting), “Why are they not giving me bread?!” and my friend responded quickly, “Maybe they think you’re carb-free?” causing me to yell inadvertently, “Do I LOOK carb-free to you?!” – and magically, bread appeared literally within 30 seconds of my yelling (I think it was on its way to the table when I yelled).  Hahaha… oops! 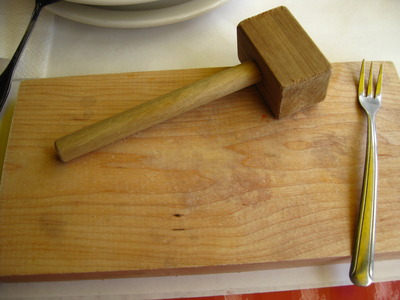 The implements with which they expect me to eat my crab.  No no no.  I don’t do that.  Experts don’t require mallets; mallets are for posers and n00bs.  I’m good.  Thanks. 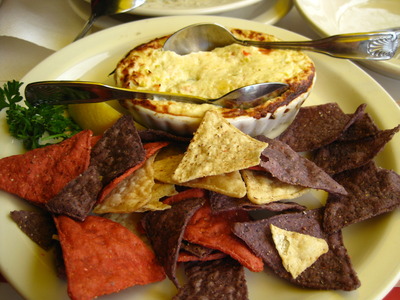 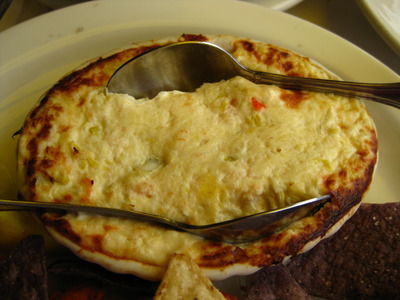 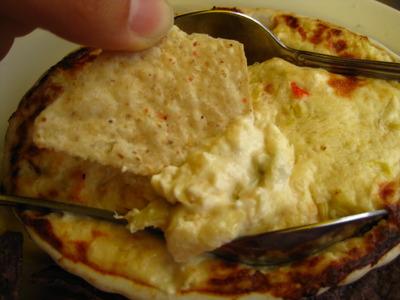 Crisp chips with which to scoop up lovely hunks of artichoke, crab, and cheese?  Check!  Yum! 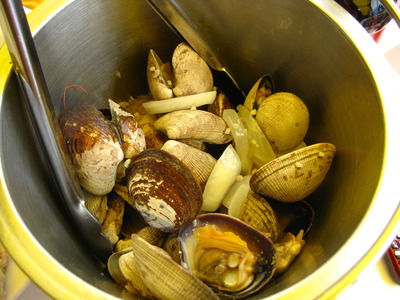 I also started off with a bucket of steamers, since that was one of the things in the seafeasts that I’d wanted to eat.  Sweet, succulent, but a bit sandy, and no bowl of broth was included to swish my bivalves through to loosen the grit, though butter was in abundant supply. 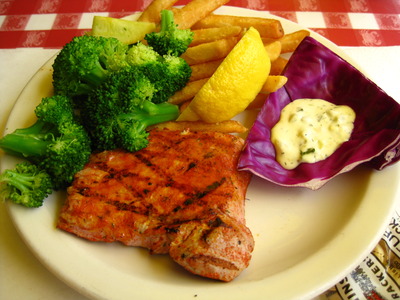 Because I can, I ordered a slab of ahi tuna (and yes, I ate my veggies, as overcooked as they were)… 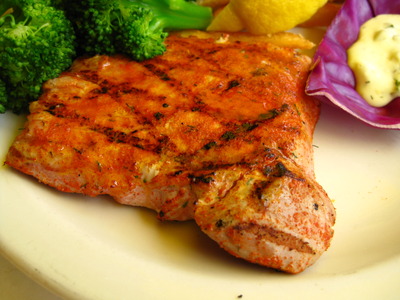 And I requested it be as rare as possible. 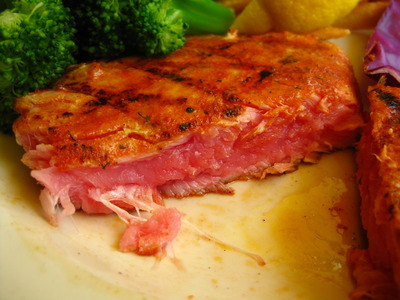 I think they succeeded, wouldn’t you?  Tasty enough, but not really mind boggling, I’m not entirely sure why I ordered this.  Just for the heck of it, I suppose… 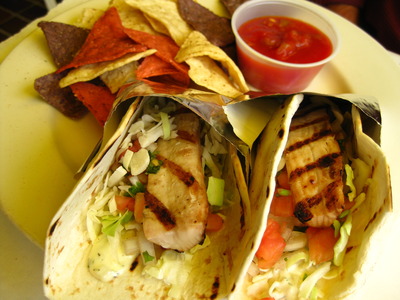 Fish tacos, again, because I can. 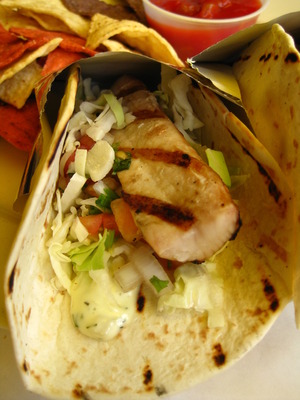 Tasty enough, but not really memorable. 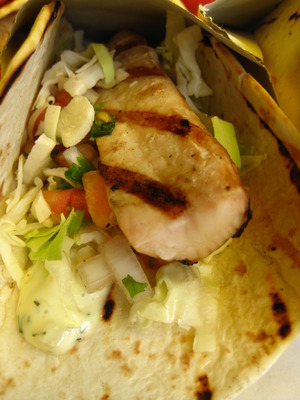 Let’s face it.  The real reason anyone comes to The Crab Pot is probably for the seafeasts, at the least… 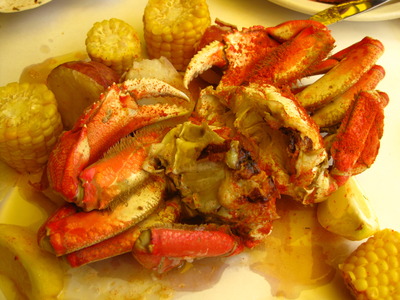 For the whole steamed seafood. 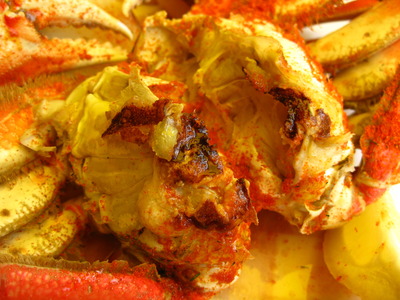 Unfortunately, as HB had warned me, this was more a touristy spot than a really good seafood place, but I’d been so hell-bent on the seafeast – which I then wound up not getting – I mean the crab was fine (and I didn’t finish it; I wound up taking half of it back to New York for my mother, who enjoyed it sufficiently).  But it wasn’t amazing where I was figuratively crying big fat tears of joy while I ate it; it wasn’t even “Looking at these pictures now, I want that again” (though the chowder is doing that for me,… and the steamers would be nice, but anyone can make those easily at home).  It was just… OK. 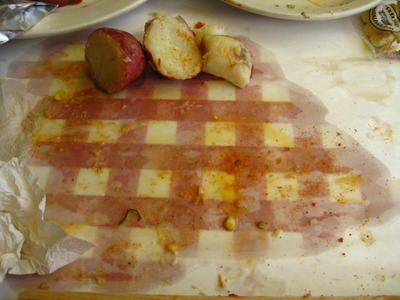 The aftermath – nope, I ate a bite or two of potato but really was so full, I gave up quickly and just concentrated on not hurling all over the table from overeating.

Yvo says: While I can’t say my meal was not enjoyable – I sat in the greenhouse-like-area with all windows, and enjoyed a very sunny day (witness my excellently lit pictures) – and my server was adequate (a bit distracted)… this really is just a tourist attraction.  It’s on the water, and enjoys a lot of tourism from the boats docking nearby, but really… it wasn’t that special.  I won’t say “Don’t go here!” because who doesn’t enjoy the spectacle of someone dumping out a bucket of seafood onto your table? but it is definitely not a must-visit.
middle of the road; depends on your needs and wants from the meal and restaurant