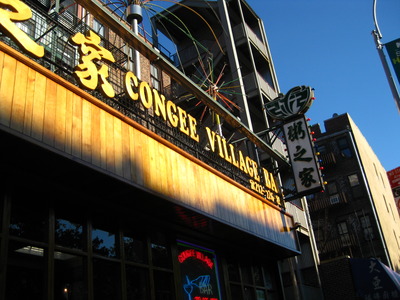 After a couple of hours at the batting cages, BF and I had sufficiently worked up an appetite – despite my brunch – and met up with BlindBaker plus BF’s former coworker, JP (I don’t know why I referred to him as this in a previous post – one of the downsides to using initialed nicknames constantly) and his wife, VSa, to grab some food.  JP and VSa wanted to hit up Congee Village in Chinatown, which caused both BlindBaker and I to cringe internally, but I decided to put my gameface on and put aside my prejudices.  (With a name like Congee Village, I really want to ask them WTF they were thinking.  Plus, I’ve been twice in the past, and their congee sucks – how are you going to put “congee” in your name and then not make it properly?!)

***I should note here that I actually co-hosted a baby shower here – for ANM and T of TCC – three years ago – and I enjoyed some of the food, as noted below.

Because I speak Cantonese semi-fluently (especially in food), I ordered everything everyone wanted, in Cantonese.  The fun part was when he tried to clarify things with me, and I had no idea what he was asking me!  Shameful that I can ask for things but I can’t answer when they ask me things…. sigh. 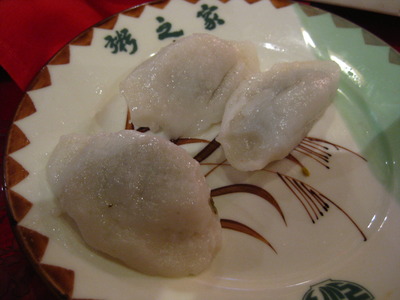 JP and Vsa ordered veggie dumplings, steamed.  I didn’t want one, but they said these were pretty sad – very soft and floppy, and not very tasty.  FAIL. 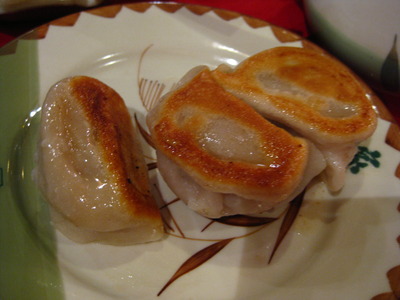 BF wanted fried dumplings, but these were the thick-skinned kind he doesn’t like.  I tried one, and while I don’t mind thick skin (sometimes; I have to be in the mood), these were not cooked through (the skin, if that makes sense) and the meat was not that flavorful, even with the use of black vinegar.  FAIL. 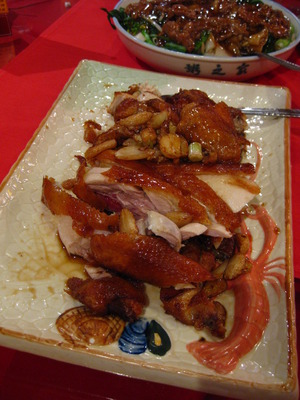 I remembered this dish from the baby shower – garlic paper fried chicken, which I ordered as such, but the waiter tried to tell me the name is something else.  Ok, you know what I’m talking about, so why do you have to keep telling me I have the name wrong?  I said “Ok, but it’s paper fried chicken with garlic added, right?” and he kept telling me about some sauce that’s added.  I don’t know what he was talking about.  So I got the name wrong, but the dish was right: juicy fried chicken with paper-thin crispy skin, tender meat, and amazing bursts of garlic flavor.  I don’t like chicken at restaurants, but this is one of the dishes I like to eat a few pieces and be done with.  I think an entire meal could be eaten of this and rice… Yum!  Everyone else seemed to like it, too. 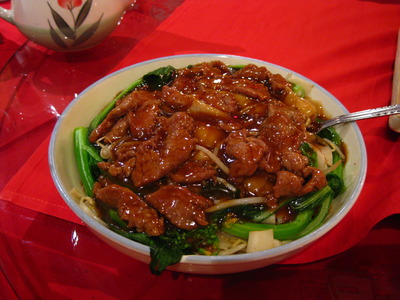 “Wet” fried noodles with beef, beef ho fun, sup chow ngau ho.  Yes I’ve tried to make this before, to great fail (don’t look for it! please!).  They did it pretty well here – this was another of JP’s choices – lots of beef, veggies, and the noodles were good. 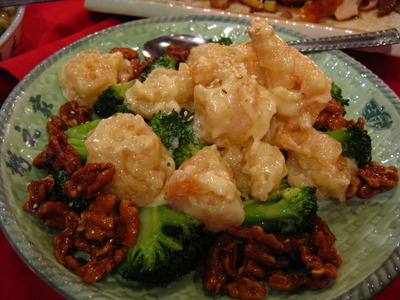 Honey walnut shrimp, VSa’s favorite dish.  She said she really likes this here, and it was perfectly tasty – large shrimp, each coated with the sauce.  I’m completely biased and still prefer my favorite Cantonese place, especially since they keep the sauce separate for me to dip as liberally or as conservatively as I like (and to scoop some into my white rice to eat like that… o yes I did and do!).  I also would have liked extra sauce to dip the broccoli in, but as it stands, this is an acceptable version.  (I also prefer the beef noodles – the last dish – from my favorite place more, but that’s straight bias, since these were good, too.) 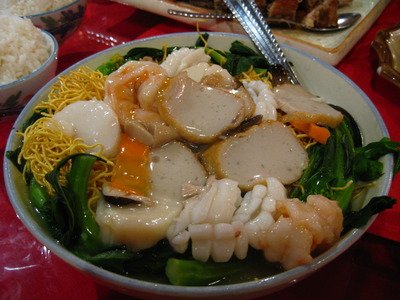 Seafood chow mein – I love noodles.  These were really good, lots of seafood, though a bit skimpy on the more expensive seafood bits.  JP said he liked this dish a lot too, which made me glad I’d ordered it – I didn’t want to be seen as the pig just ordering stuff that no one else wanted to eat (we shared everything family-style).  When I asked for “jeet cho” (red wine vinegar), the guy brought it but then pointed out the black vinegar on the table.  Hon, if I wanted to put black vinegar on my noodles, I’d be crazy first of all, and second, I’d have used it already then.  I just kind of blankly stared at him because I didn’t know the name for black vinegar in Chinese until he pointed at it.  This was very confusing.  Did he not know I wanted to put this on my noodles?  Was he just having fun mocking the girl who clearly did not know any Chinese but FOOD??? 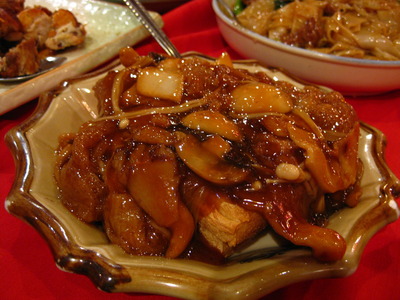 BlindBaker stepped in here and added a tofu dish whose name escapes me (or perhaps I never knew it).  This was tasty with rice!  Can you tell me what the name is?  Thanks! 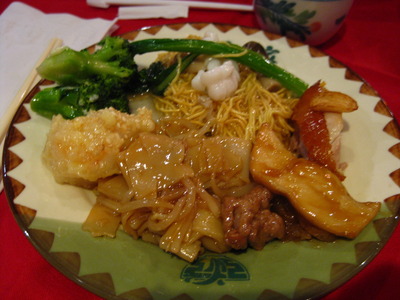 My first plate, I took a little bit of everything to show you.  Then I stuck to mostly noodles since those are the carbs I crave.  Seafood chow mein with red wine vinegar???  Yes please!!!  NOM!!!

Yvo says: Both BlindBaker and I admitted to each other that we had unfairly judged Congee Village without giving it a fair chance till then.  The food was tasty enough.  However, it’s in an awkward part of Chinatown for those of us using mass transit (on Allen Street) (we drove this time and found parking very close by, luckily), and to me, this isn’t real Chinatown – not just because it’s on the edge, but because it’s a large, very clean restaurant – good for those who are going to Chinatown for the first time.  The food is definitely tasty – but I don’t think I’d seek this place out often.  Maybe if I were showing people new to Chinatown, or wary of “hole in the wall” dining, I could see going back.  The full bar doesn’t hurt either (though we didn’t utilize it).  I can’t speak to prices because BF and JP paid without letting us look at the bill – thanks again, BF & JP!!! – but I know that neither of them said it was expensive, and we had some leftovers to take as well.  Oh, and the waiters totally spoke enough English for those who are new to Chinatown and don’t speak Chinese.
recommended for Chinatown n00bz and/or those afraid of grime