One of CT’s closest friend was in town from Hawaii, LH. She really wanted to see a Broadway show while she was here, so I met them for a quick bite in Hell’s Kitchen before the show. I suggested we go to Ardesia, since I had a Blackboard Eats coupon for 30% off that was expiring soon. It is a wine/small plates bar that opened last fall opened by the “Director of Strategic Partnerships” at Le Bernandin. They have a nice patio out front, but unfortunately there were thunderstorms going on when we arrived. I liked the space a lot, very hip and unique, especially the catwalk wine cellar above the bar. It also turns out that the chef is an alum of El Quinto Pino, whose chef I met at the Tapas book release a few weeks ago.

As with all small plates restaurants, it is best to share in order to maximize the amount of dishes to taste. CT & LH each got a glass of champagne ($6 for HH), while I got the the Peak Organic IPA ($5 for HH).

The first dish to come out was the Duck Banh Mi (house cured duck, spicy duck pate, sriracha aioli, picked vegetables). It was a very tasty sandwich with some nice heat to it. The fresh veggies really helped to bring out the flavor. It also came with some homemade potato chips. I believe they were fingerling potatoes, since they were such small chips. CT & LH described the chips as “cute.” 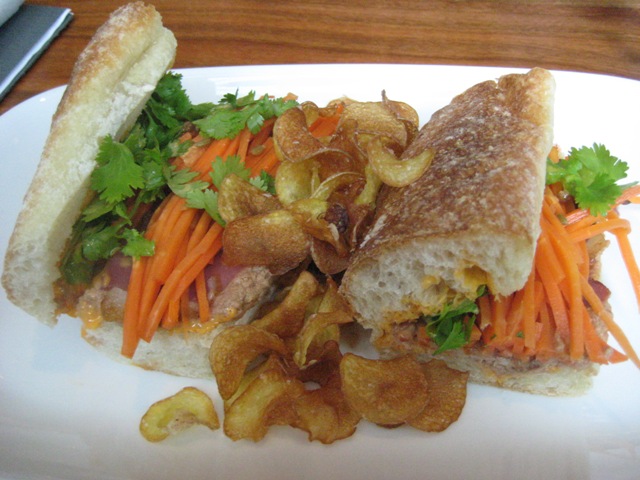 Next was the Pastrami (house cured and smoked pastrami, caramelized Vidalia Onions, cameo apples). This was also a tasty sandwich. An upscale version of what you would get from the traditional Jewish deli. It also came with those yummy chips. 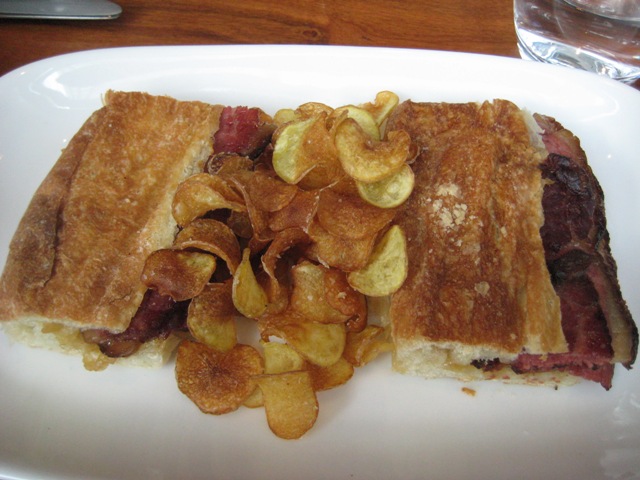 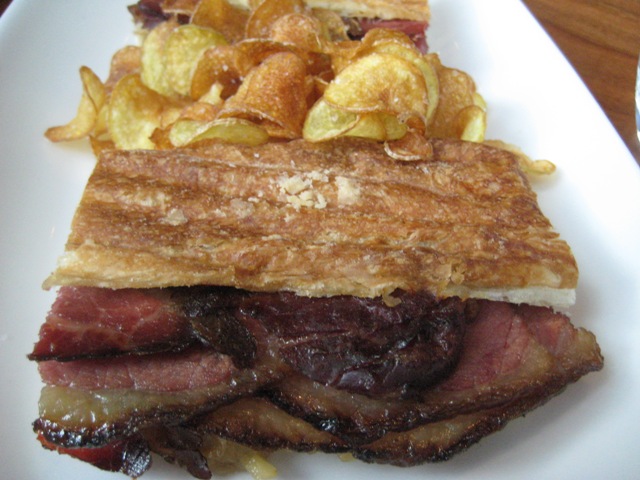 We got the Artichoke salad to be “healthy.” The deep-fried artichoke counteracted any chance of that. The salad was dressed nicely in a light vinaigrette with cannellini beans and gremolata. The artichoke was fried perfectly. 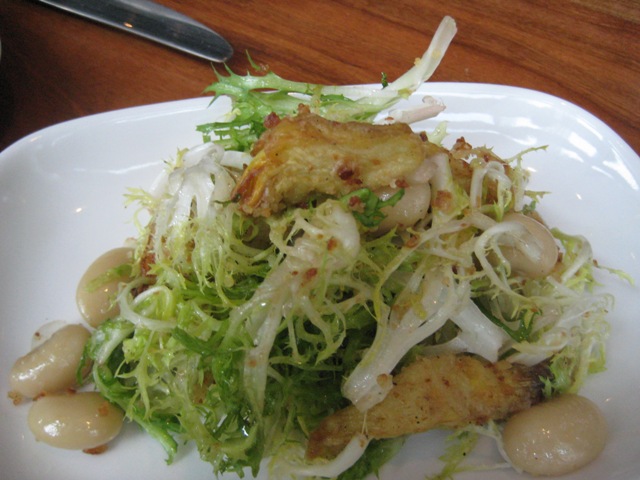 In order to get our hollaindaise fix, we ordered the Quail Egg Toast (house-cured panchetta, fried quail egg, hollandaise). It became a little messy to split the two toasts for 3 people, but well worth it. It was gooey, salty, deliciousness. 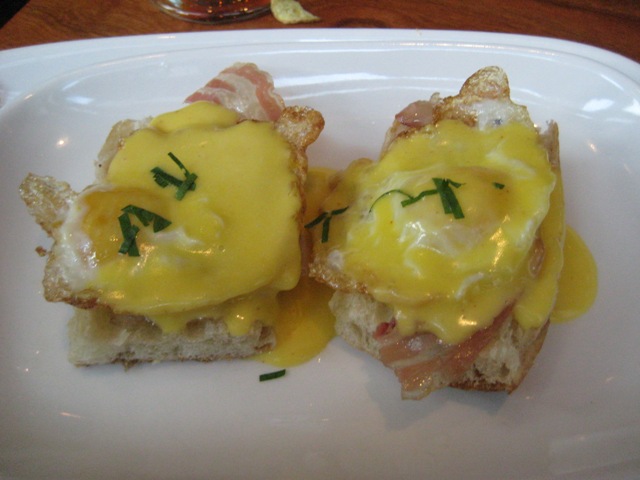 The Homemade NY Style Pretzels with Dijon mustard and cheese sauce was an impulse order. My instincts turned out to be right. I am a pretzel fiend and these satisfied me. The pretzels had the right amount of sea salt and “burned” flavor. Both dipping sauces were a quite tasty accompaniment. 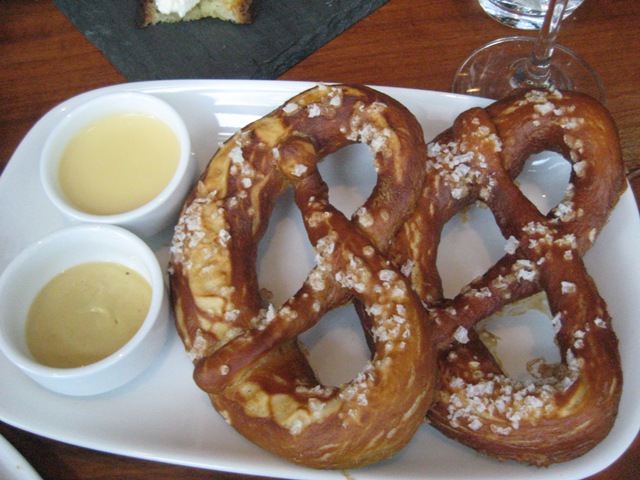 Our last savory dish was the House-Made Goat Milk Ricotta Crostini. This was very light and refreshing. LH thought it was a little too “goatey,” so she only had half of her piece(more for me!). 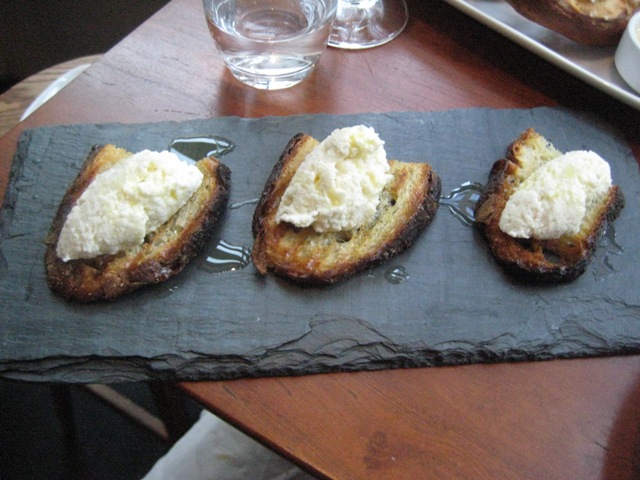 The girls knew they wanted to order the Homemade Chocolate Chip cookies. They are made to order so we had to order them early. They came out still warm and gooey. I had a bite and it was quite a good cookie. It wasn’t mind-blowing, maybe could have used a little sea salt like someone else’s homemade cookies, ;). 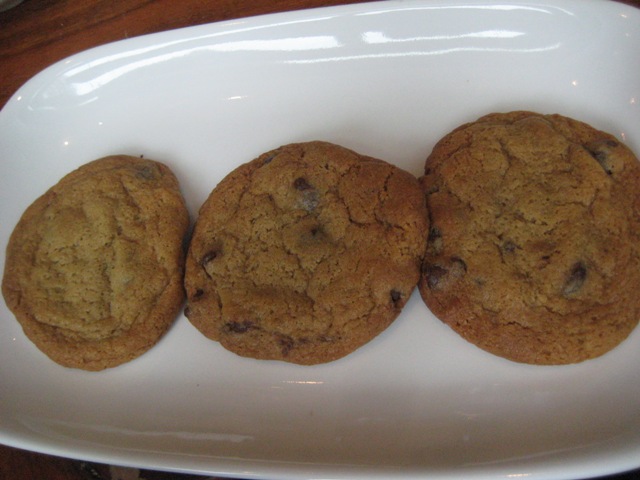 All in all, it was a great opportunity for trying some tasty dishes along with some wine and beer with a nice discount. If you find yourself in the far reaches of west 52nd street, I recommend stopping in even if you don’t have a coupon.

« The Slanted Door and Out the Door
Saigon Asian Cuisine »