A couple of weeks ago, I got another Blackboard Eats email, but this time it was for Meatopia. I had no idea what that was but knew it wasn’t a restaurant. After some investigating, I found out that it was an upcoming BBQ festival on Governors Island. I was a little hesitant though since the most famous local BBQ festival, the Big Apple BBQ, has become quite the shitshow over the past couple of years and I do my best to avoid it; Yvo’s review from a couple years ago. However, I had a great experience on Governors Island at a moe. concert a couple of years ago, so I figured I would give this a shot. There was also the 30% off from Blackboard Eats, which helped seal the deal. Regardless, I knew it would be imperative to get on the first ferry to arrive right at the start since they expected 5,000 people there (still much less than the Big Apple BBQ).

The Island is only open on the weekends, but offers a free ferry from the terminal right next to the Staten Island Ferry downtown. CT & I got there just a couple minutes before the boat was about to shove off, so it worked out perfectly. As soon as we got off the boat, we met some friends to partake in this amazing display of meat. 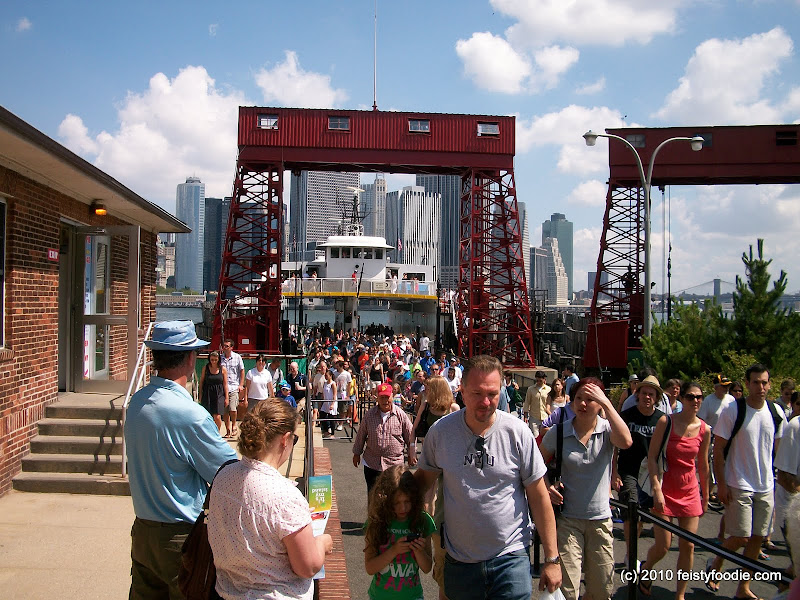 After we traded in our tickets for our taste cards, we decided to do a quick stroll around to see what we wanted to try first. The first stand we came across was Hill Country, but passed on that since we were part of a group with a vendetta against HC. You know who you are and what the reason is! 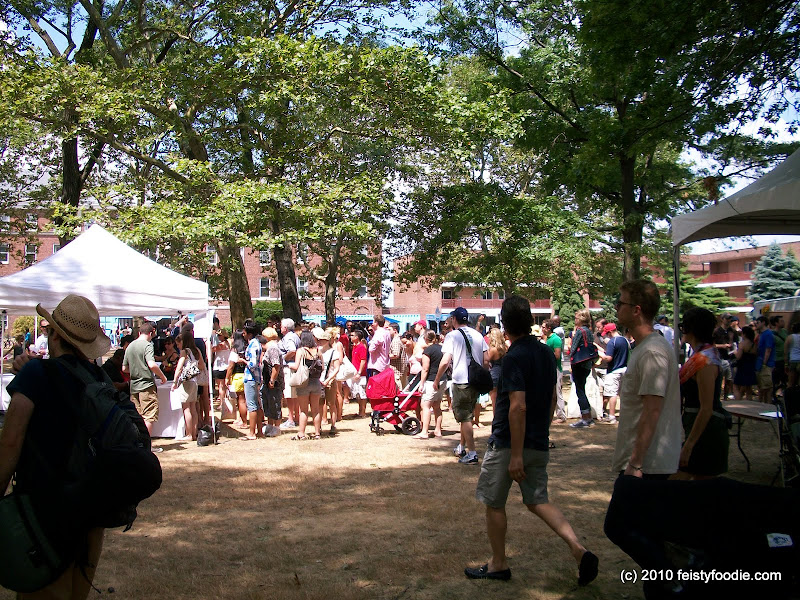 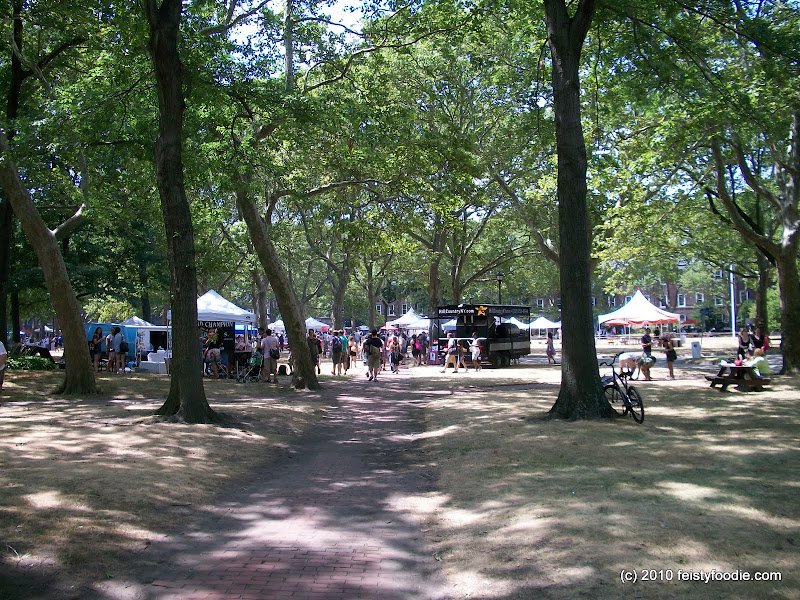 Jonathan Waxman, of Barbuto and more recently Top Chef Masters fame, was there. I asked to take a picture of him, but he said we should come around so the three of us can be in the picture together(Sorry folks, that picture will stay private). He is as nice as he is on TV. Chef Waxman was offering Grilled Marinated Chicken with Pickled Green Papaya. I know what you are thinking, grilled chicken = BORING!, but since Chef is a grilling master, this was great. The chicken was super juicy and had a nice kick from the veggies on top.

CT says: I agree! I’m not usually a chicken-orderer, but the little bite was delicious! 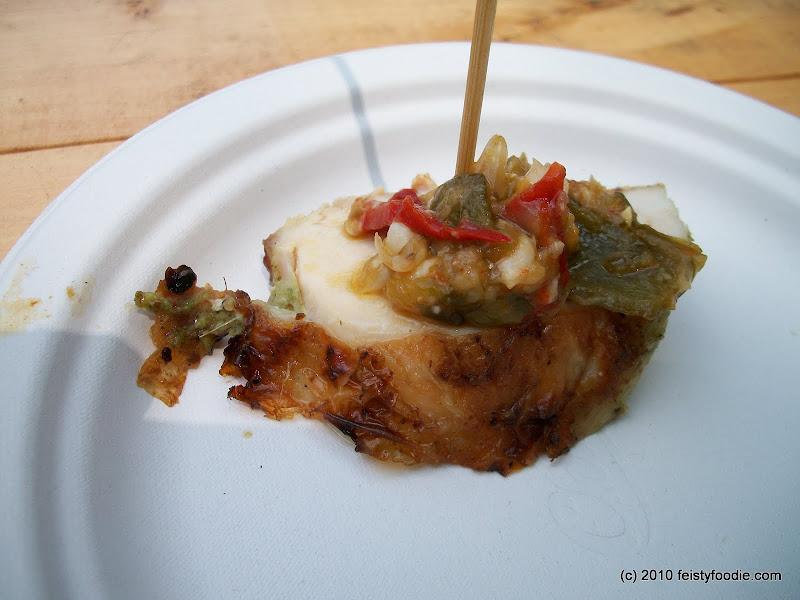 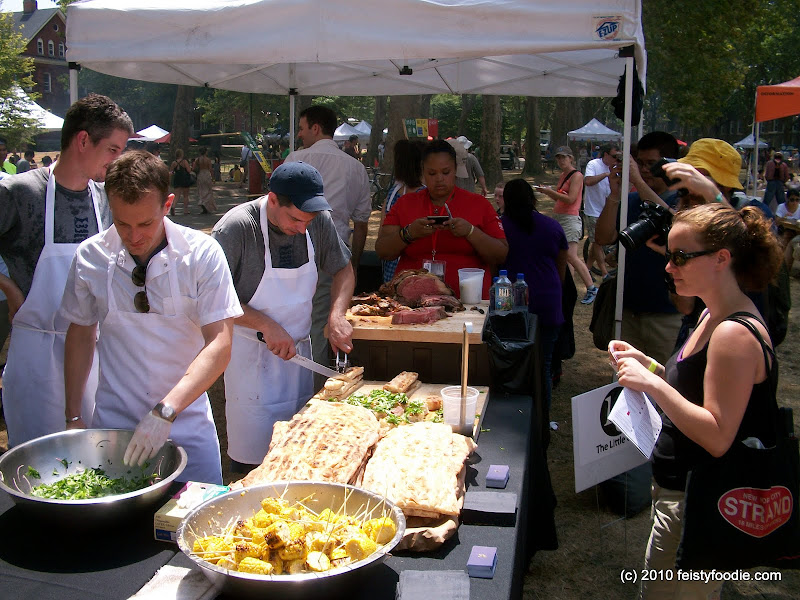 Next up was the team from Resto. Chef Bobby Hellen was roasting a whole mutton on the spit for his MLT sandwich. I loved the presentation of the skull on the table. The sandwich was quite yummy. I think it was some sort of bacon bits on top, but I never asked what it was. Check out Yvo’s review of Resto here and here. 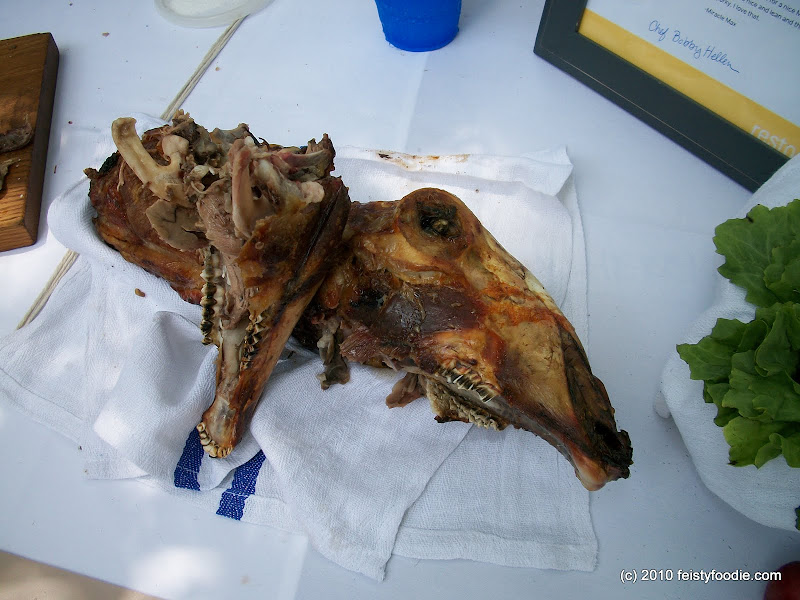 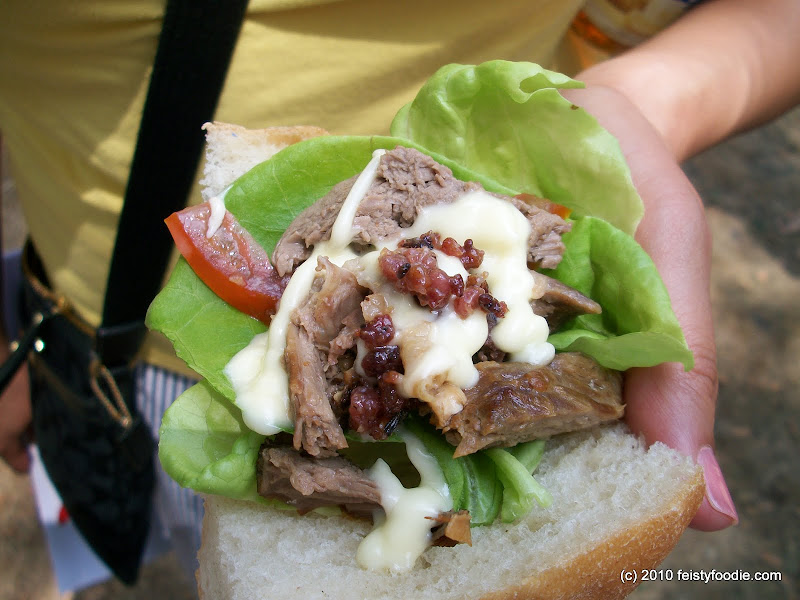 Right next to them was the team from Bobo offering a Grilled Bacon Sandwich, Pickled Green Tomatoes, Napa Cabbage. Yes, you read that correctly, A GRILLED BACON SANDWICH! I am so glad we arrived early and were able to get one of these. Each sandwich had a HUGE slab of bacon on it. It was as good as it looks, if not better. Even CT liked it and she is not a fan of bacon on its own. This was my favorite of the day. 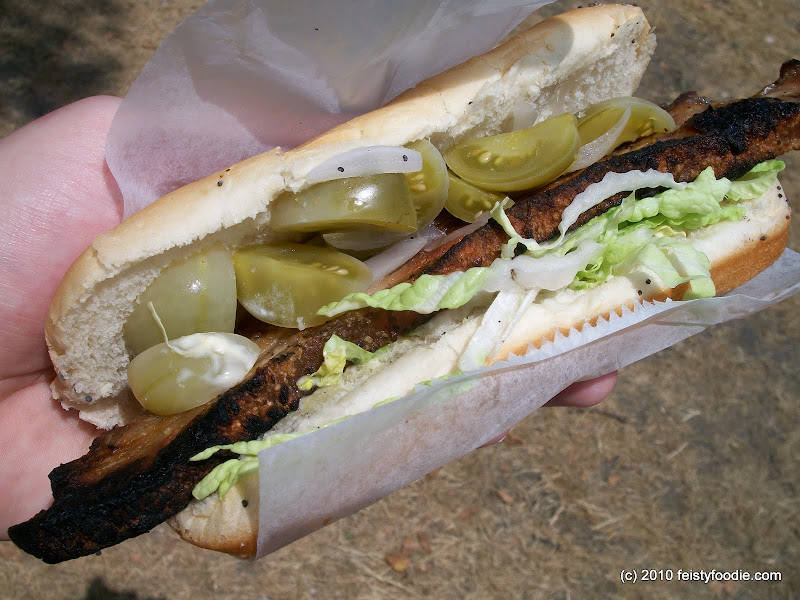 Chipotle was also there. I had no plans to stop at their stand until I saw that they were giving out free tacos. It wouldn’t cost you a “taste” on your card. The steak was good and got a nice kick from the salsa, but the tortilla could have used a little toasting on the flat top. Then again, who I am to look a gifthorse in the mouth? 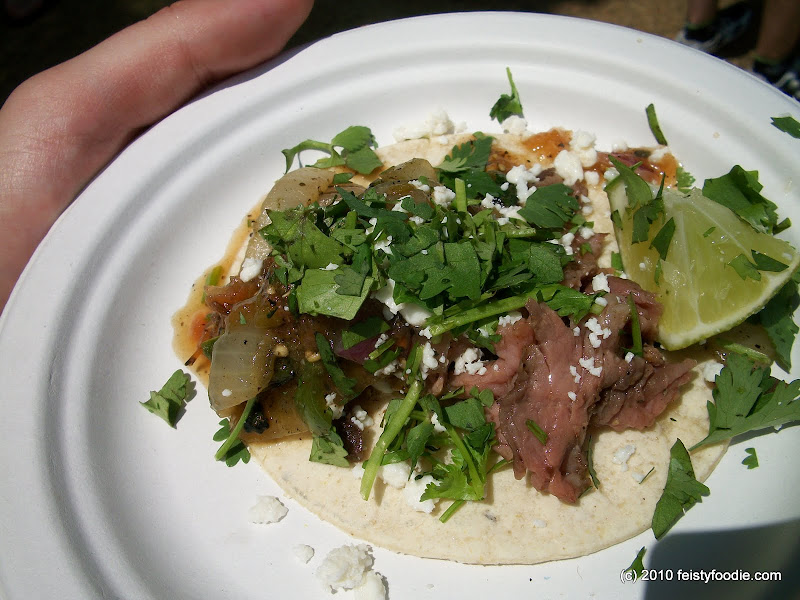 Seamus Mullen, of Boqueria, was roasting a whole lamb. I planned on stopping by later for a taste as I was already getting quite full, but I did get a couple shots of the lamb on the spit. It was quite a beautiful sight. 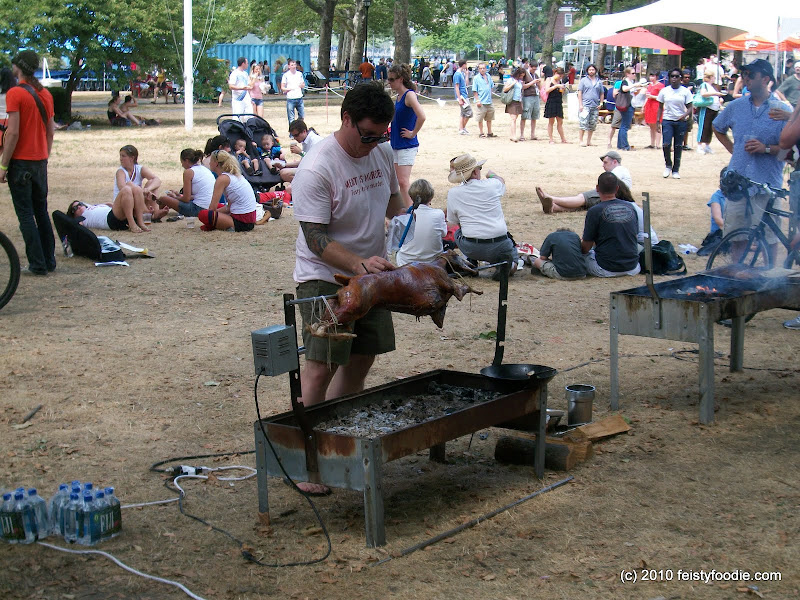 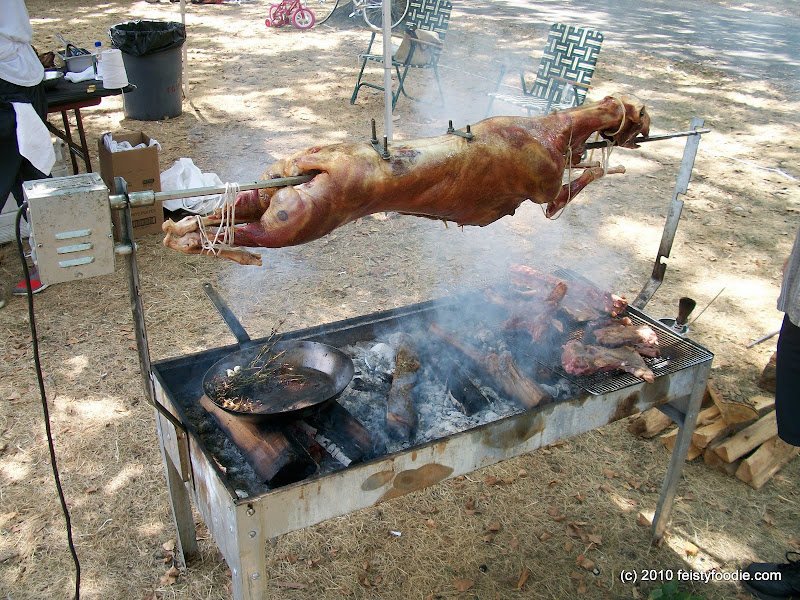 Next up was the guys from The Meatball Shop, which has gotten a lot of good press recently. They had Wood Grilled, Mini Chicken Meatball Salad with White Beans and Watercress. Grilling chicken well, let alone, chicken meatballs is quite the feat. They did a good job by having a nice crunchy exterior and juicy interior. CT & I will have to move The Meatball Shop to the top of our list of places to visit. 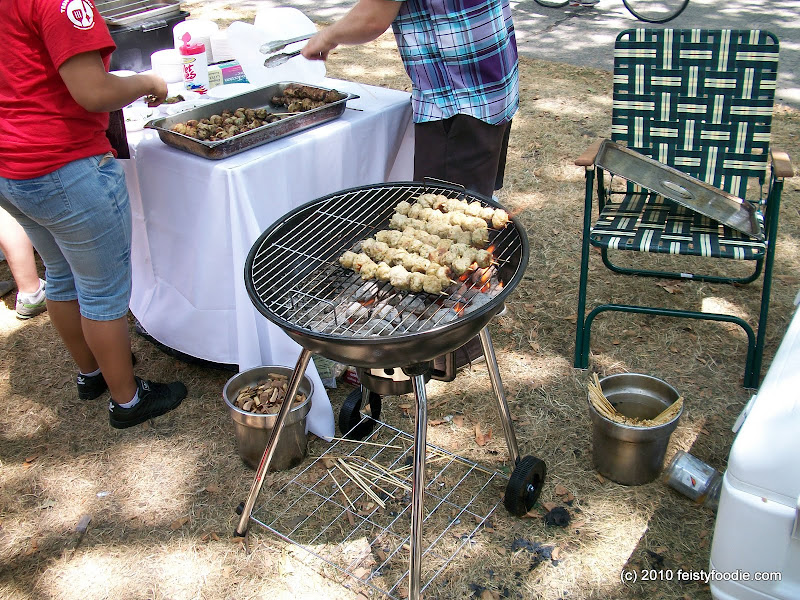 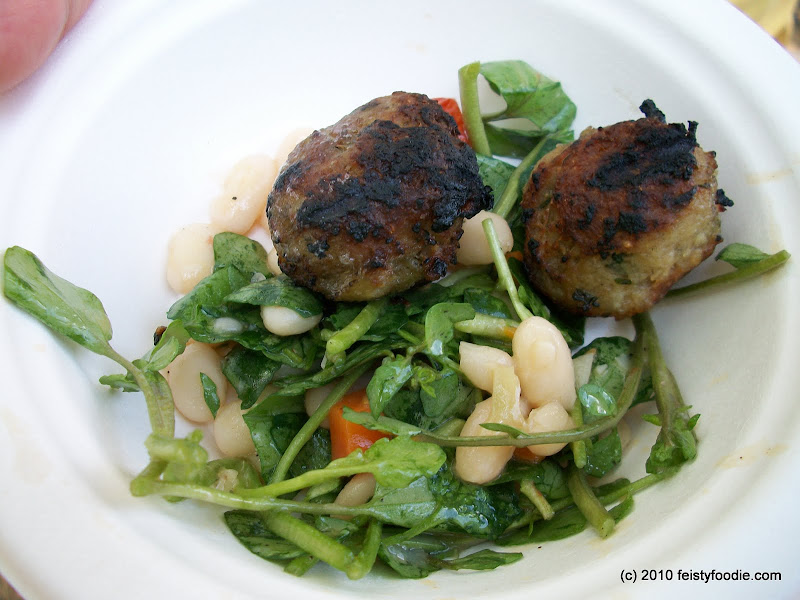 I guess China Grill wasn’t attracting that many tasters because they gave CT one of their ribs without marking her card. They made Lamb Spare Ribs, Plum and Sesame Glazed. I guess the butcher shop had a deal on lamb this week? There were so many lamb offerings. I didn’t like this dish at all. The glaze was super sweet. Check out Yvo’s review of China Grill here.

CT says: I liked the ribs. The sauce was a bit sweet even for me, but for a small portion I thought it was good. Also, a nice break from the pure “meaty-ness” of some of the other dishes during the day. And a free tasting! 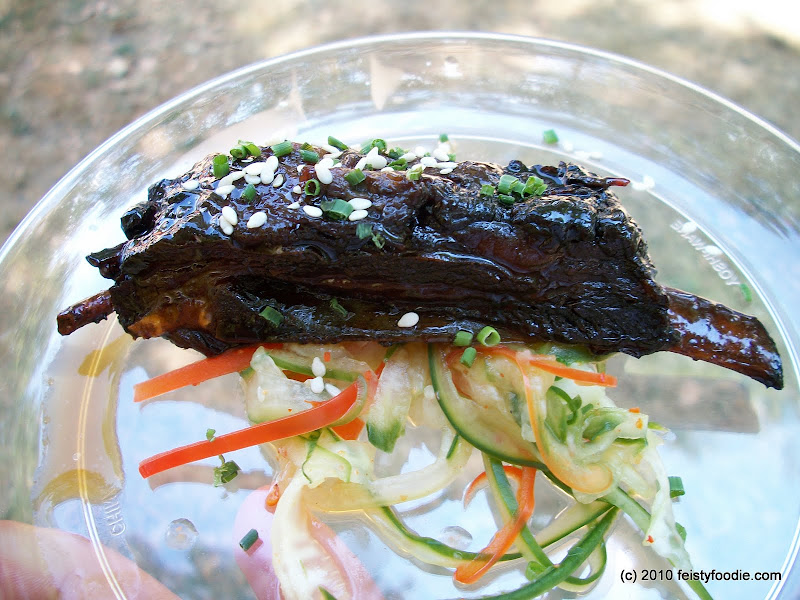 Chef Michael Lomonaco, of Porter House, was giving out Grilled Skirt Steak Hoagies, Chimichurri & Roasted Corn. These were HUGE. I would have expected them to give portions half of the size. The steak was cooked perfectly, but the bread ended up getting pretty soggy. Overall, it was just ok. 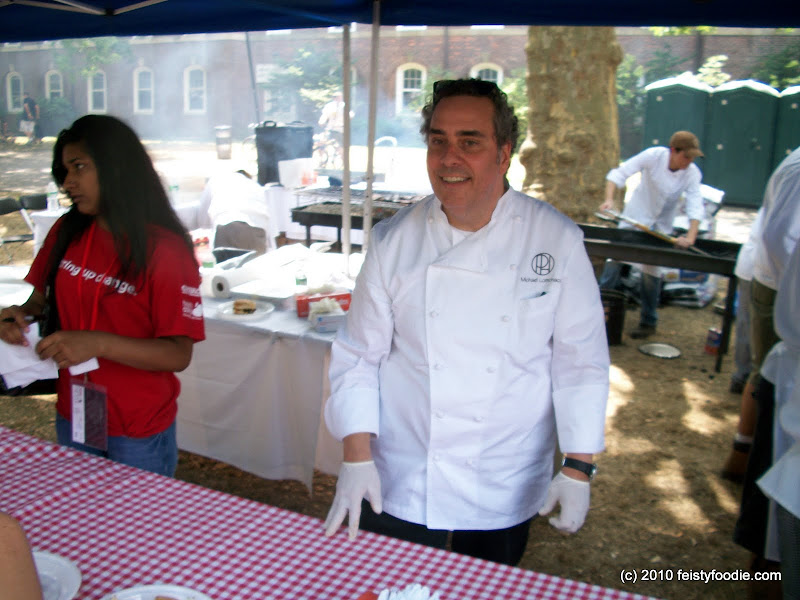 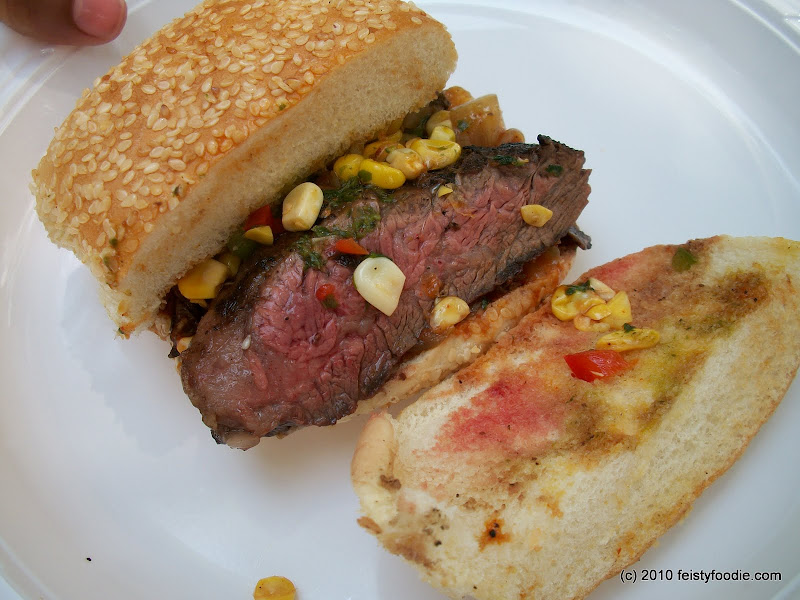 One of the other hot items(no pun intended) was the Honey-Glazed Baby Back Ribs with Thai Basil & Mint from the forthcoming restaurant, The Hurricane Club. This is going to be another tiki-themed place that seems to be the new trend in the NYC dining/bar scene. It also had a couple fried lotus root chips. They gave us 3 gigantic ribs, so much food. These were tasty, but still a little too sweet for my palate, but less so than the rib from China Club.

CT says: I loved these! And the lotus root chips were perfectly crispy; I could eat a whole bowl of those! Can’t wait for this restaurant to open. 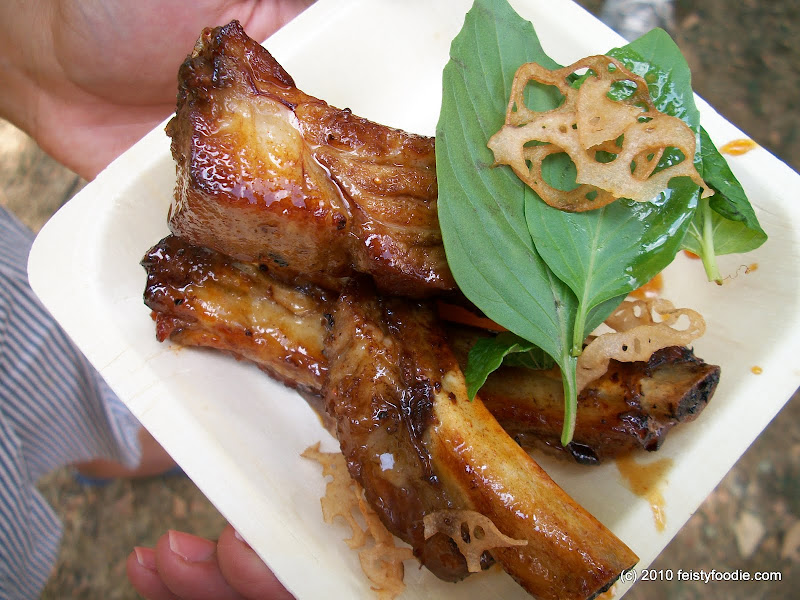 Next up was Mile End, the newish Montreal-style deli, with their pastrami. It came on beer bread rye with a nice spicy mustard. Waterfront Ale House also had pastrami, but I was only able to get a small bite before they ran out. I liked Waterfront’s better since it was more unique than the better than average deli style pastrami at Mile End. 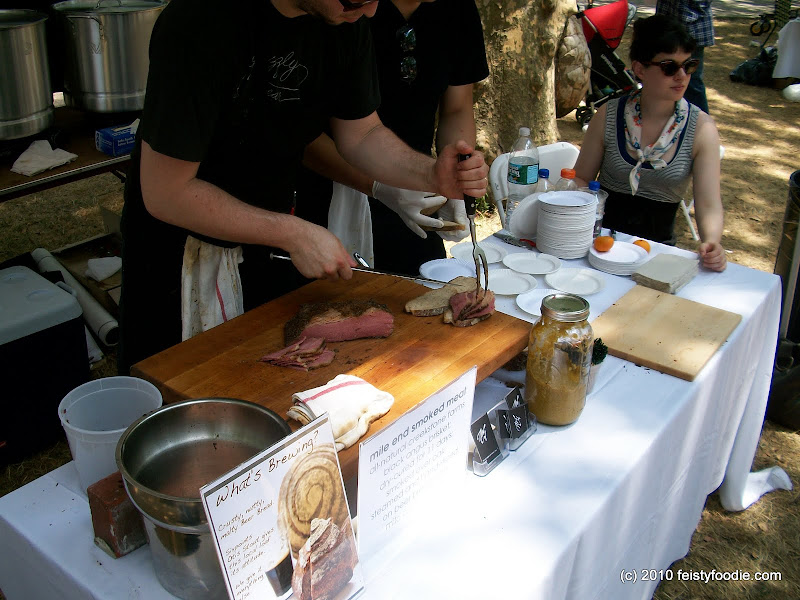 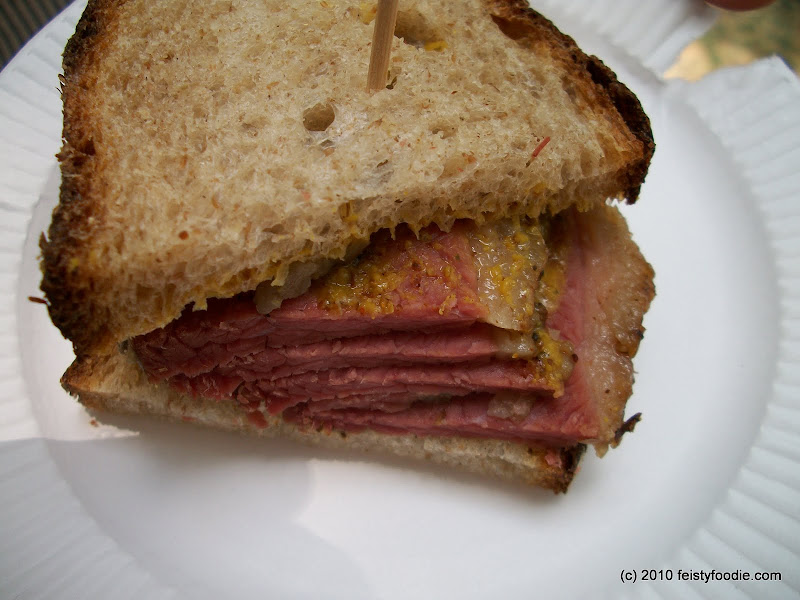 Chef Amanda Freitag of The Harrison(also a recurring judge on Chopped on The Food Network) was also in attendance manning the grill, or should I say womanning the grill? I am here all week folks, don’t forget to tip your waitress. She made Char Grilled English Lamb Chops, but we were too lamb’d out to try. 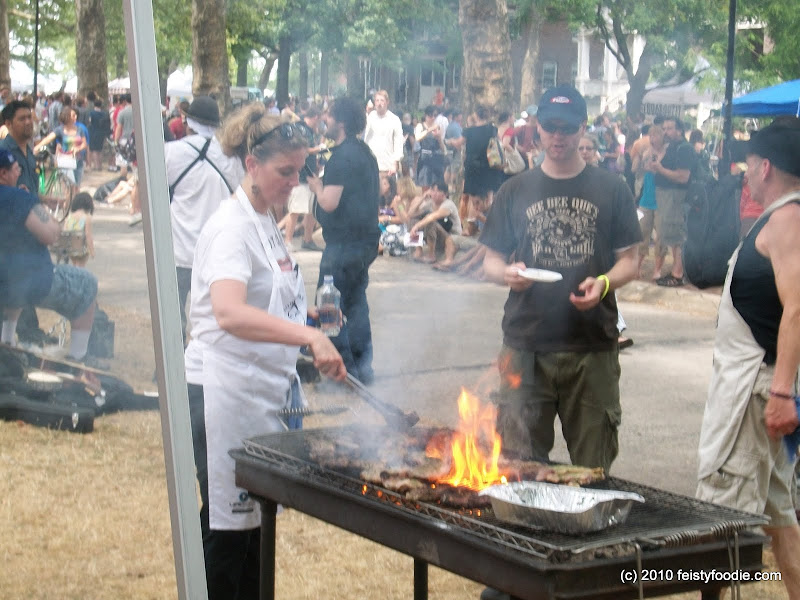 Smokin’ Joe’s True-Blue Texas Barbecue roasted some pigs, but the line was one of the longest at the entire festival and we got over there towards the end of the day. 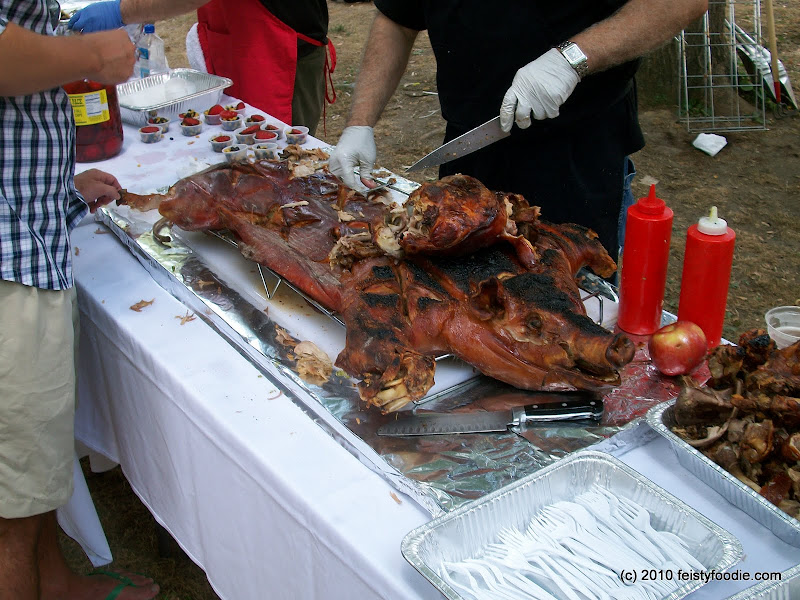 One of the nice touches was that bands were setup at various points throughout the grounds busker-style. It was a lot of fun to see someone playing a string(guy on the right). 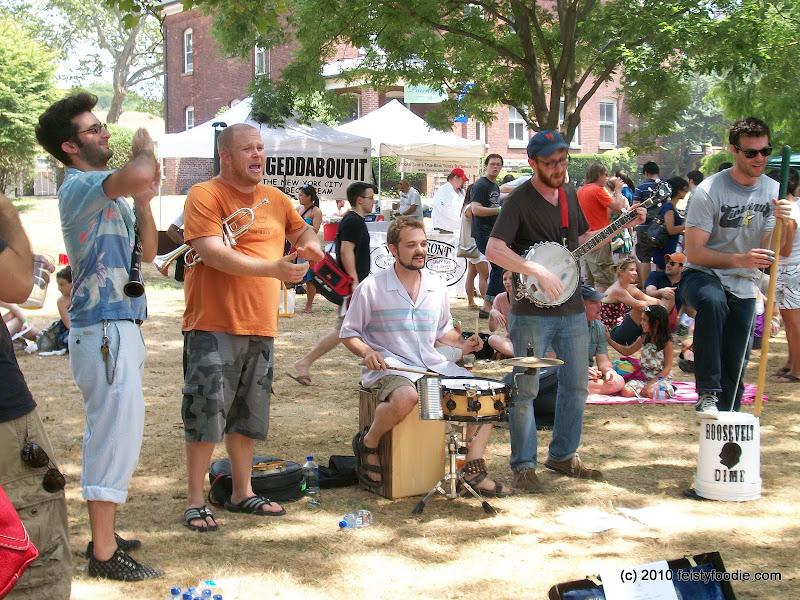 There were a couple demos going on during the day. One of them was a bison cookoff between Norwood Club Head Chef Andrew D’Ambrosi (who you may remember from Top Chef a couple seasons ago) takes on Michelin-starred SHO Executive Chef Shaun Hergatt. Josh Ozersky, most recently of Weddingate fame, the founder of the festival was at this demo to say a few words (guy in the hat, center). 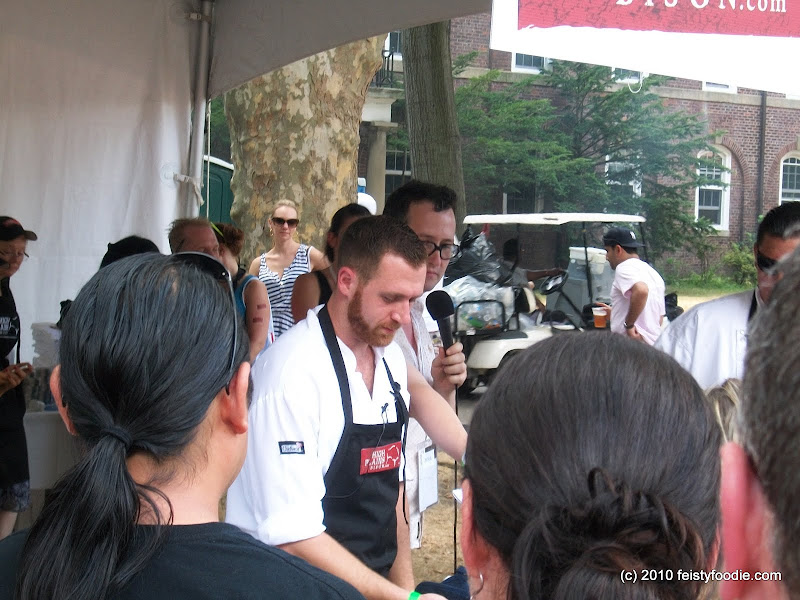 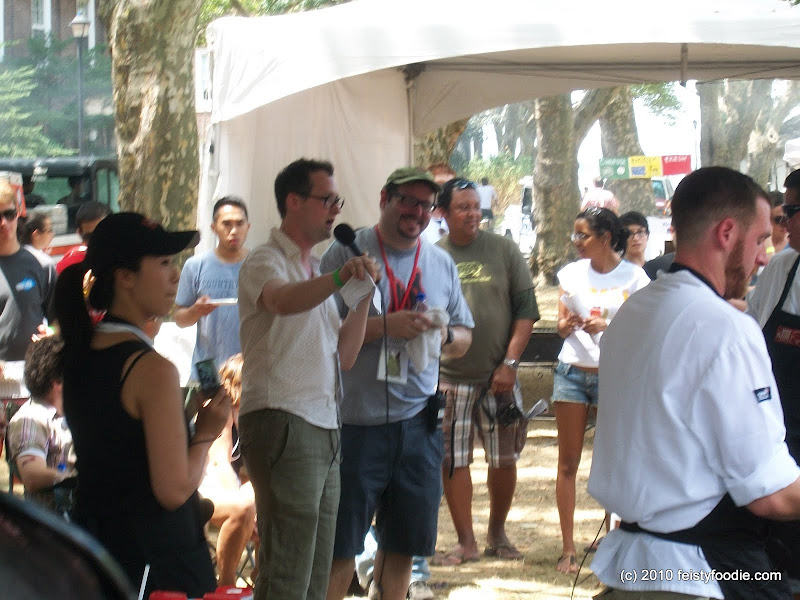 There was also an Italian Ice and an Ice Cream vendor there. The Ice Cream Vendor had three different offerings; maple-bacon, chocolate-stout, and a blueberry apricot sorbet. Johanna couldn’t decide so she got all three. Any ice cream that is topped with a big piece of bacon is a win in my book everytime. 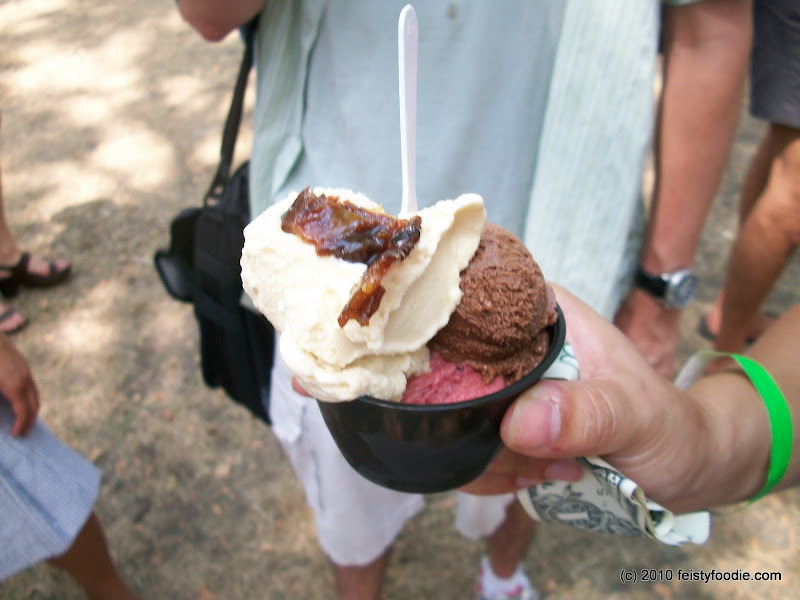 Sixpoint was on hand to keep our thirsts quenched with a couple different offerings.

We also walked outside of the festival, to check out some other parts of the island and to help digest. We even played a couple holes of mini-golf, which was free with donations suggested. I found one hole to be particularly disturbing. Bye bye, Canada? There were also art exhibits throughout the island and bikes available for rental. 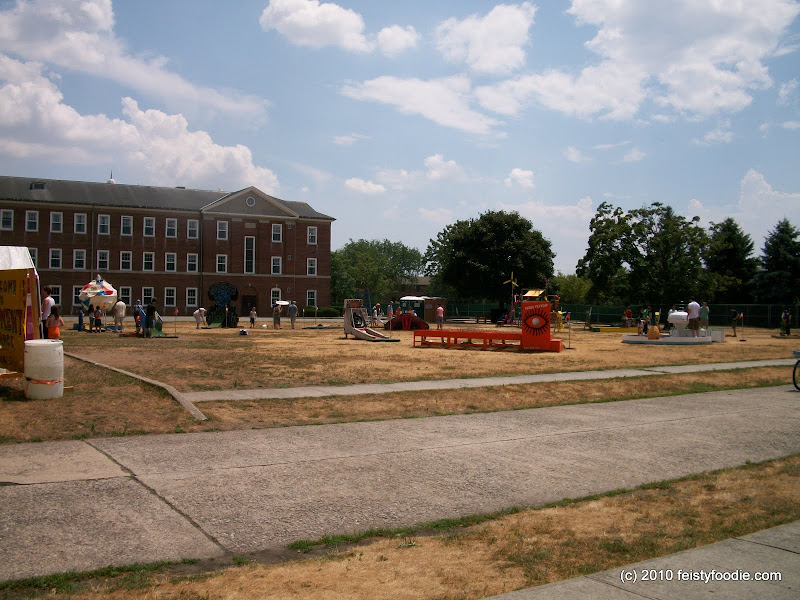 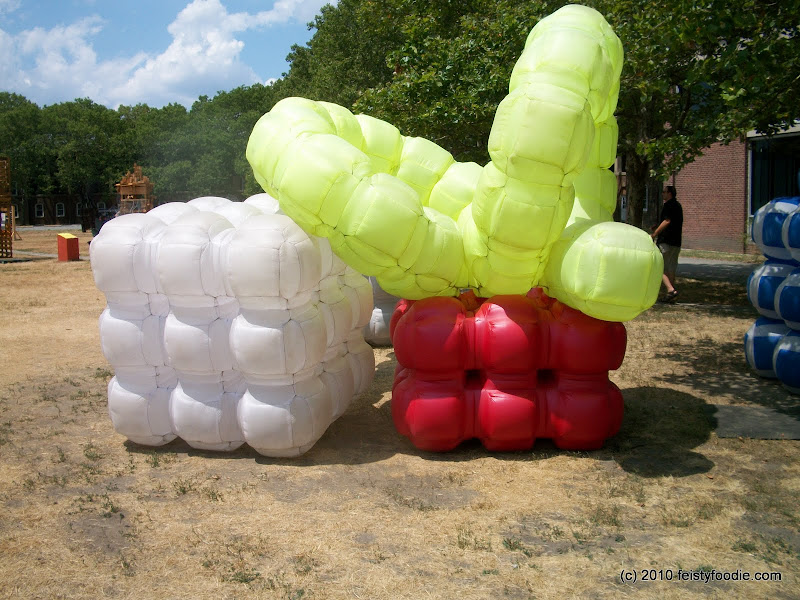 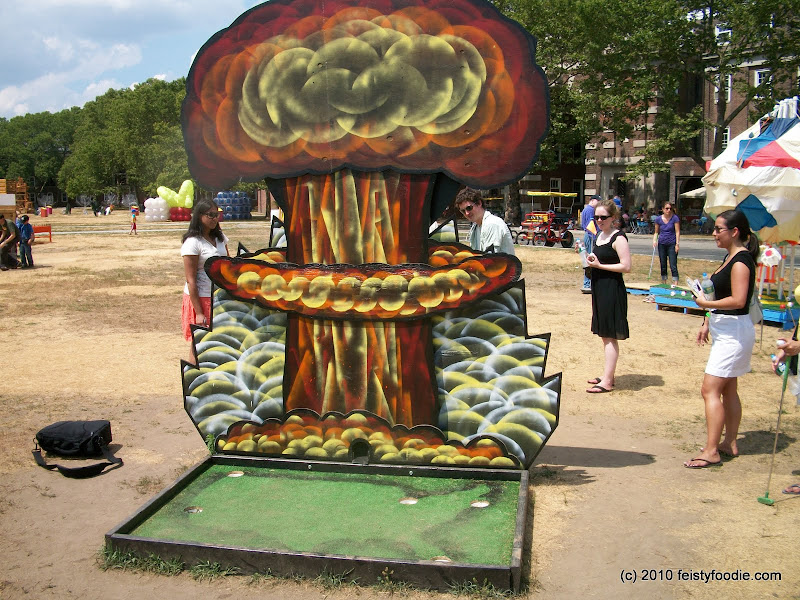 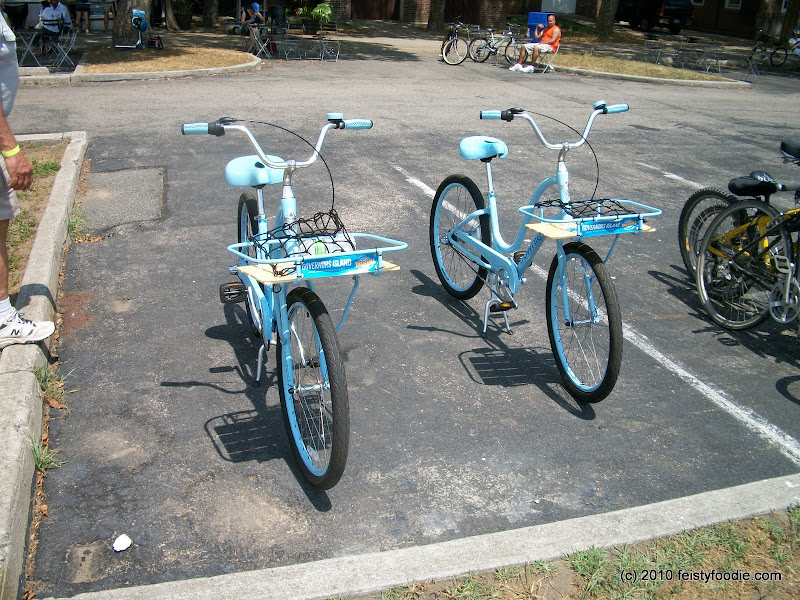 Since I had one taste left on my ticket and everything was quickly running out, we stopped at the I-Que BBQ for some Competition Style Pork Shoulder. It was super juicy and quite tasty. 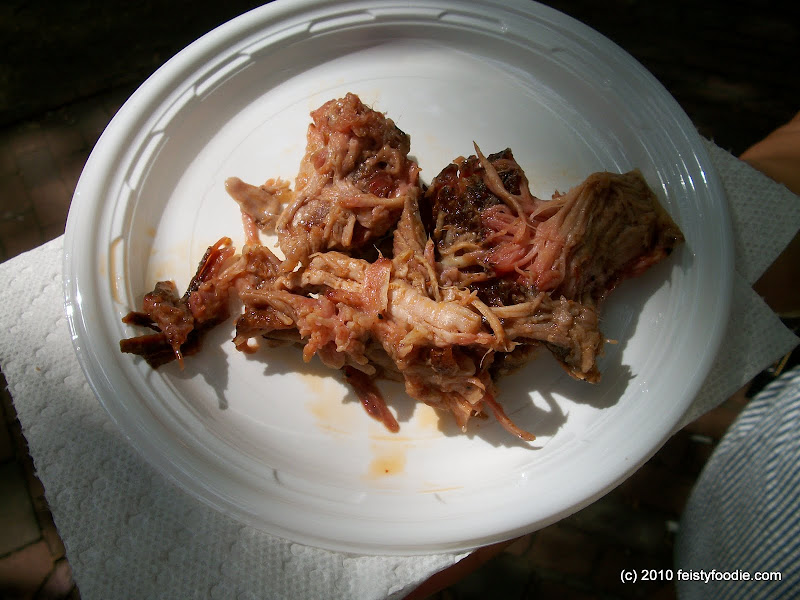 All in all, it was a great day. It became quite busy with long lines as the day went on, but all of the chefs seemed to be on top of things and kept the lines moving. It was also nice to see how friendly everyone was as we picked up our tastes, even the ton of executive chefs/celebrity chefs that manned the booths. They really did want us to enjoy the food and I certainly did! The Blackboard Eats coupon didn’t hurt either.