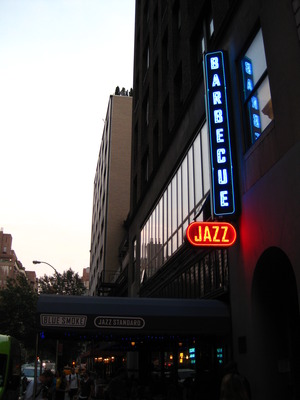 I’ve mentioned Blue Smoke in the past with regard to Citi Field – their stand there used to have really delicious chipotle wings that they’ve since removed from the menu (yes I’m still bitter).  But I’d never visited the actual restaurant, and wanted to, so I grabbed three friends and headed over there.  Which 3 friends?  Actually, the three friends I have that have never said “No, that’s too much food, we shouldn’t order so much” to me… 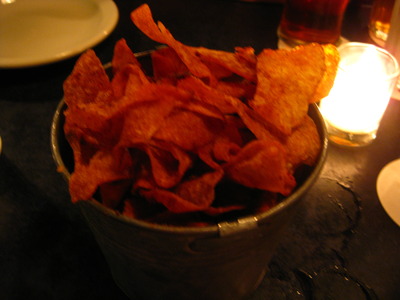 I know these are not clear pictures – sorry!  We started with housemade BBQ potato chips, served with a side of… 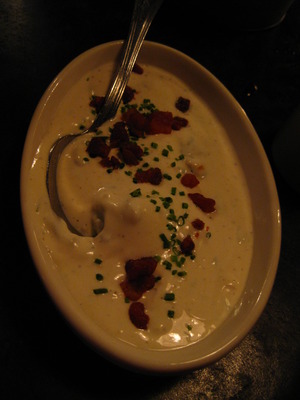 blue cheese and bacon dip.  The idea was nice, but the execution – well, the chips were tasty on their own.  The dip was slightly too ‘blue’ for me – the mold flavor shone through a tad much for me, so I ate this very sparingly.  Everyone else seemed to enjoy it, though! 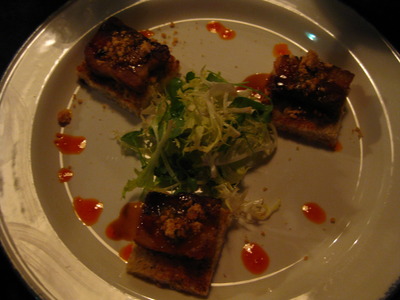 BlindBaker spoke up as I ordered nearly the entire menu for all of us, and asked if we could add this.  Uh, yeah we can?! – Berkshire Pork Belly on toast.  Omg, pork belly is already delicious, but make it Berkshire and it was so tender, so succuluent… so delicious… we nommed this down quickly, though I felt bad because there were three pieces and four of us.  Oh well!  (Someone split the last piece, certainly, but still.) 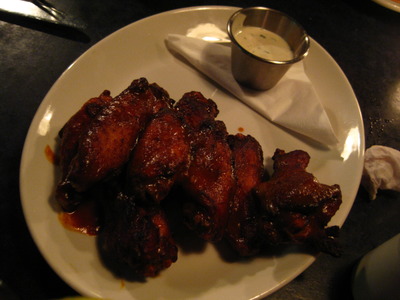 Of course, since I’d been missing them so fiercely this season, we had to order the chipotle wings with blue cheese dip.  Interestingly, this blue cheese was different from the other one, and I found it yummy, and the wings I’d so desperately missed at Citi Field were now in my hand.  And yes, they were gloriously the very same wings I wanted – meaty, smoky, and juicy.  BlindBaker wasn’t as enamored of these as I was – or so she said, as she ate more, claiming she needed to get a better idea of what the taste was 😉  TC and BeerBoor ate them without complaint, though I’m pretty sure I still liked them best out of anyone. 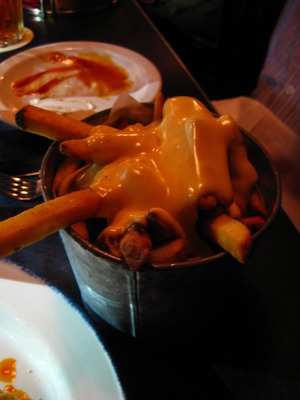 Next to appear on the table were the spicy cheese fries, which weren’t spicy but were delicious.  Crisp fries doused in liquid cheese; there’s no real way to mess this up, in my opinion (well, if you start with bad fries).  This disappeared pretty fast as well!

So far we were all pretty happy.  Then our main courses appeared. 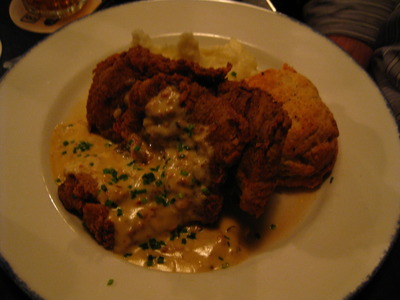 BeerBoor ordered the chicken fried sirloin, which he liked though the breading came off a little too easily.  The meat was tender and the gravy good, he said.  I tried a bite but chicken fried steak has never been a favorite of mine, so I thought it was OK. 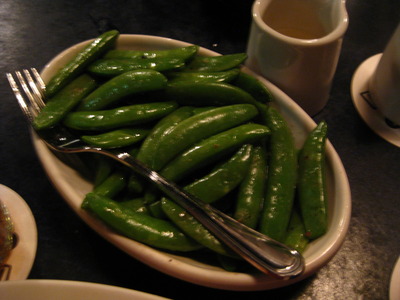 When I saw sugar snap peas go by to another table, I had to add that to our already huge order.  I LOVE sugar snaps.  These were no exception: cooked ever so slightly, coated in butter, great snap and tons of sweetness to them… nom.  Maybe a touch too much butter (when you have good veggies, you don’t need that much butter!), but still delicious. 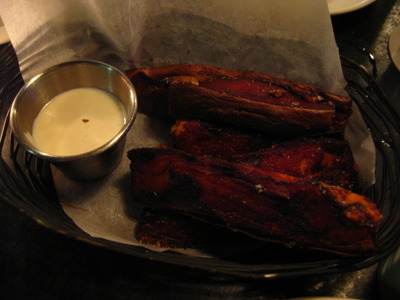 These look like ribs, right?  And we’re at a BBQ place, so that is a valid assumption.  But they are… sweet potato “fries” with maple dip.  I’m not a huge fan of sweet potato fries to begin with – I like to dip thin, crispy ones in a little salt and be done with it; I’ll never order them myself, but if someone orders them, I’ll happily eat a few.  But these were ginormous wedges of sweet potato, more like baked sweet potatoes that you had to eat by cutting into them.  I wasn’t thrilled and no one else seemed too pleased either. 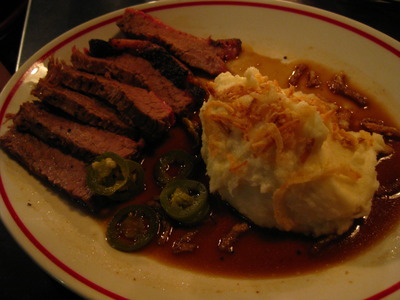 BlindBaker ordered the brisket – it looks lean to me, but I don’t want to steer you wrong (maybe she’ll speak up!).  I did try a piece and liked it enough that if I went back, I would order it (and the fatty next time, haha).  The mashed potatoes were pretty good, too! 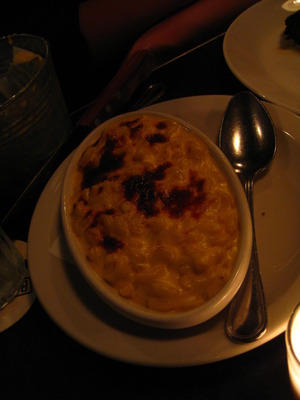 We uh, also ordered a side dish of mac & cheese, which was disgusting.  It was gummy and bland; the cheese had no flavor and was totally off-putting.  I almost felt better not eating it just because it was so horrifyingly untasty.  Boo. 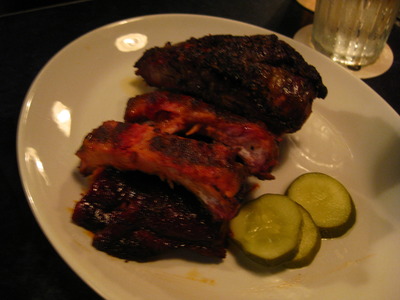 TC ordered the rib sampler, and thought his ribs were OK.  (Hoping he also speaks up with his opinion!) 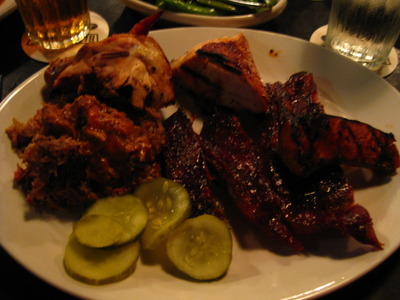 And me?  I wanted to try a little of everything, so I ordered Rhapsody in ‘Cue: pulled pork (horribly bland and dry! WTF?), Kansas City spare ribs (these were OK, a little dry and chewy, but good flavor), smoked chicken (dry and pitiful), and sausage, which had a lot of flavor but wasn’t anything special at the end of the day – it’s a sausage link.  I was incredibly disappointed with my platter, and made everyone try some of it to see if I was just expecting too much.  They all agreed that my dish was woefully lacking in flavor.  None of us wanted the leftovers when we were done eating. 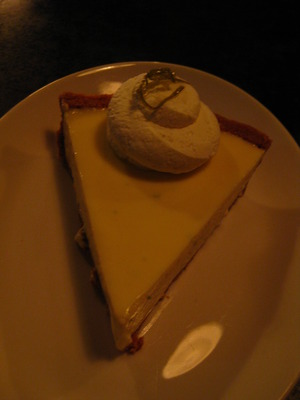 Since I’d literally just had Key Lime pie for the first time a few days prior, I wanted to try it somewhere else.  This was perfectly tart, and very good, though I wanted the custard to be a little softer.  That is definitely personal preference though.  BeerBoor and I split this and found it great. 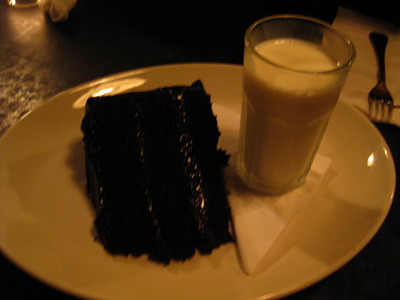 BlindBaker and TC, both chocoholics, ordered the chocolate cake “so rich, it comes with an ice cold glass of milk” to share.  I know they both liked it a lot – I tried a bite and indeed, it was everything it said it would be.  Very tasty.

Yvo says: Perhaps I was expecting too much from the barbecue, but I found the appetizers and desserts in general much, much tastier.  I suppose I should go back and try more – but really, judging by the above, I think I ate a large portion of the menu… good job, guys 😉
middle of the road – some hits, some misses, some FAILs…