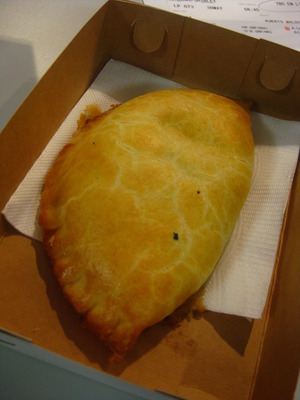 Between flights, while we waited in Lima for our flight to Puerto Maldonado, specifically, HB and I wandered the Lima airport (domestic) for a little bit.  We saw this small deli-ish stand that also offered empanadas; when we’d been to Argentina about two years ago, we’d eaten a LOT of empanadas and really liked them, so why not?  Countries sort of close to each other… 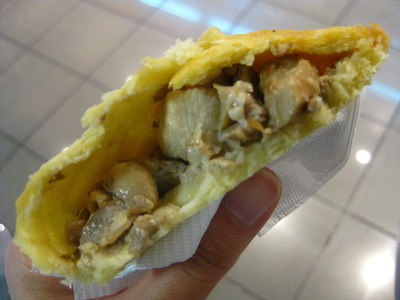 While this was tasty enough, I wouldn’t say it was anywhere near as good as the empanadas we’d had in Argentina.  This one appeared to be baked but slightly soft, and contained chicken and mushroom… the mushroom leaving a slightly earthy-funky taste in your mouth afterwards.  I believe it was a 9sols or so – about $3~ USD which wasn’t bad; HB and I split this as a snack before heading to our plane for Puerto Maldonado. 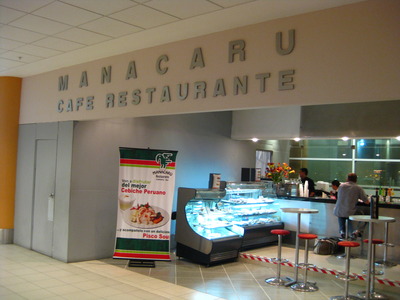 On our way back through the Lima airport, HB and I found ourselves with a 7 hour layover!  We’d both heard that Lima can be really sketchy and dangerous, but initially wanted to venture out just for a quick dinner.  With HB not feeling too hot, and me feeling just meh about the idea, we decided to just hang out in the terminal, reading, and to eat at this random cafe (it was this or La Bonbonierre, which is the same name as a bakery in NJ that I’ve loved in the past… but that place was SO expensive, and did not have the cake I so love, so we passed). 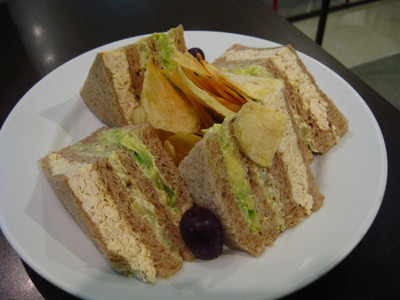 Glancing over the menu, we decided to split two things; a ‘triple sandwich’, chicken, avocado, and artichoke. 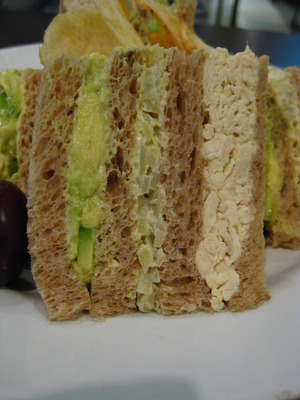 The artichoke flavor was a bit lost in the sandwich, and the chicken a bit dry, but the lovely, creamy avocado more than made up for it.  It was pretty tasty and not too pricey – a few bucks at most, the prices at this cafe were fairly reasonable (still more than the general food prices in Peru had been, but not expensive, per se). 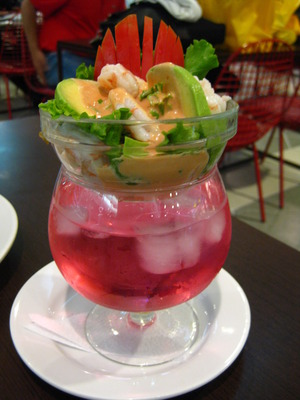 HB hadn’t been feeling well for the latter half of the trip, and as such, was unable to try cebiche (yes, with a ‘b’), which she’d wanted to try greatly.  I’d been iffy on the idea, very wary and nervous of eating raw fish in another country – a, what are we supposed to call them now? developing country?  – and getting so royally sick that I couldn’t function the rest of the trip.  (Plus I don’t have health insurance right now.)  So while we were in the airport cafe, I noticed a couple of interesting seafood options and pointed this one out to her: shrimp and avocado in golf sauce.  We were pushing each other a bit, and finally decided to just get it.  I think this was also only a couple of bucks; the entire meal came out to $20ish for the two of us, with sodas and a standard tip. 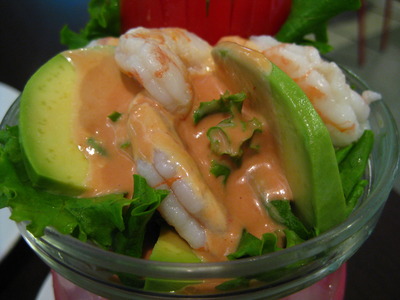 Golf sauce tastes much like ketchup and mayo mixed together, and wasn’t offensive.  What was offensive, though, was the rubbery shrimp.  Yes, I know: it’s frozen pre-cooked shrimp trucked in from somewhere, they weren’t cooking behind the deli case by any means.  The avocado was lovely and fresh, though, and with the golf sauce, a nice creamy foil to the rubbery, wobbly shrimp.  Which didn’t make us sick, though I did feel a little queasy afterwards (I ate more than HB did, since she was still a little iffy in tummy), but I later attributed this to something else.

Overall, the Lima airport has something to offer everyone; directly outside the security checkpoint are a bunch of more casual options that still boast table service, but a shared food court and seating (and watch out, cuz table hawks are everywhere!).  Starbucks, McDonald’s, Papa John’s, a Peruvian/Chinese stand, and a chicken place all sit outside, but we took our chances and went inside to eat.  Either way, there’s definitely something to eat in the Lima airport for pretty much everyone…  I think!  🙂