On yet another lovely Saturday date, the BF and I shot over to the Upper East Side to check out Southern Hospitality’s brunch.  Specifically, their ‘all you can drink’ brunch, which I discovered too late was actually an additional $11.95, not just $11.95 for an entree + drinks.  (In my defense, at Philip Marie, the charge for unlimited brunch is $16.95 and includes your entree.  How was I supposed to know?) 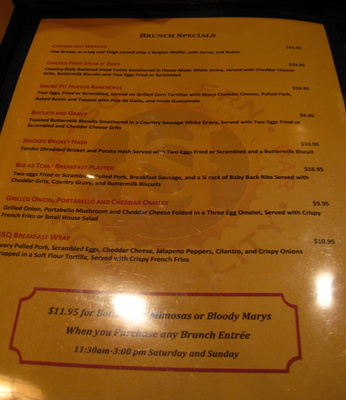 Despite that, BF decided we should do it anyway.  Okay, that’s fine by me!  We were pre-gaming before hitting up the Met anyways – museum browsing while intoxicated is pretty awesome, btw.  Here’s a photo of the menu, which is not listed on their website.  Pretty heavy fare, not your standard brunch stuff here. 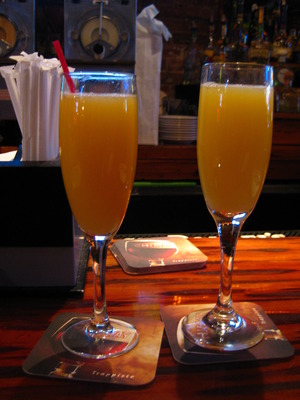 Our mimosas were a little weak, but chug enough of them, and the desired effect + vitamin C is achieved… 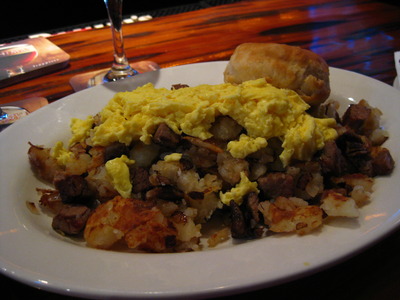 BF ordered the smoked brisket hash, which came redolent with lots of smoked brisket.  Tender chunks of smoky brisket, potatoes, and his scrambled eggs – I tried some – pretty damn tasty.  He was very happy and full – he didn’t even finish it, actually. 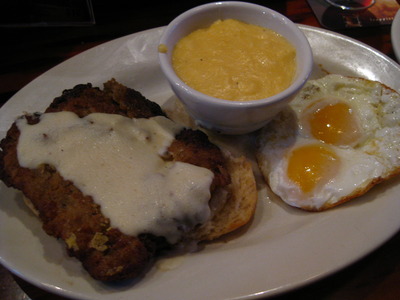 I ordered something I never thought I’d order for breakfast – steak & eggs.  Chicken fried steak and eggs, with cheese grits, to be exact.  The eggs were fried a lil weird, but passable.  The cheese grits, though, were surprisingly really good.  Initially, BF had ick’ed at them, but after I began eating them and subsequently began scarfing them down, he tried some and was impressed as well.  Super cheesy tasting without being super cheesy, smooth and delicious…. mmm them’s some great cheese grits! 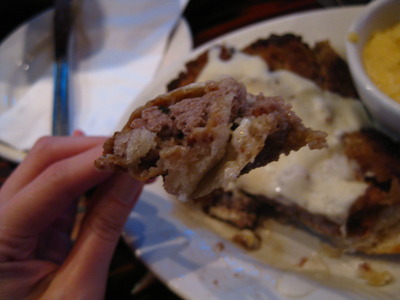 Yvo says: I like the brunch menu being different from standard brunch fare and instead showcasing Southern Hospitality’s own cuisine (BBQ/southern fare).  It makes this more of “when I’m in the mood for that sort of brunch” which makes total sense.  HOWEVER, I really don’t like their pricing structure for all-you-can-drink-brunch.  Maybe they are trying to discourage that sort of rowdy crowd for brunch (I somehow don’t think so, though, based on their Twitter and their general promotions), but honestly, even charging $20 total for all-you-can-drink-brunch, including your entree, seems more suited for this type of place and general clientele.  Paying $50+ for brunch for two is just exorbitant.  Having said that, I’d probably go back if I were in the area or really craving this sort of brunch fare (heavy!), but I would opt out of the all you can drink as just not a good deal.
recommended, but not to start off your drunken days of debauchery