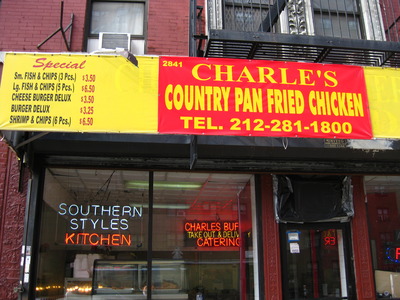 BeerBoor recently sent a link to a review of Charles Country Pan Fried Chicken to a big group of us, and then subsequently went, telling me it was awesome.  I like fried chicken, of course, what fat kid doesn’t? but had to check it out for myself to really see what’s up.  Its location in Harlem was not a deterrent for me, though it was really far out of the way. 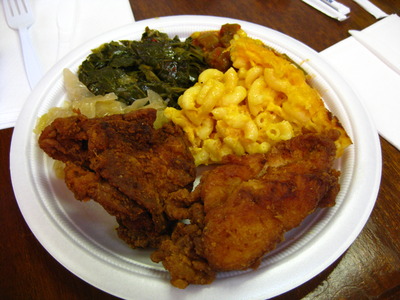 My first plate contained two pieces of chicken – unfortunately, hunger blinded me and I picked out a breast piece accidentally.  The meat was less than fantastic – I am not a white meat fan – but the skin was crisp and delicious.  I hit the wall almost immediately. 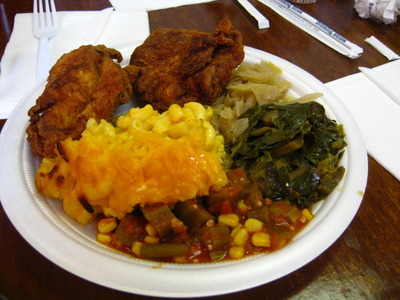 My same plate from another angle – mound of mac & cheese (which was decent, but not amazing), what I want to call succotash (okra, corn, green beans in a tomato-based sauciness) which was excellent, slightly sweet, stewed collard greens, and cabbage mash, all of which I liked a great deal.  Being my first meal of the day, I was barely able to eat the above, though I really wanted to eat more and try a freshly fried piece of chicken, which came out just after I realized how full I was, boo!  I sat quietly as TC, BeerBoor and Gary all snarfed down plate after plate.  Weak!  (Okay, I didn’t really sit *quietly per se, and I was actually feeling kind of sick before I arrived – long story – but it wasn’t like I ate the least just cuz I’m a girl!) 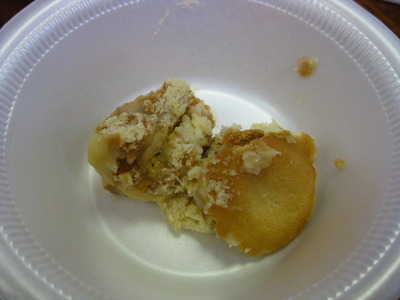 After watching them eat so much, I was pretty much done, but someone said I had to try the banana pudding.  I’ve never had banana pudding before, though I’ve seen it plenty of times on TV or blogs, whatnot.  There wasn’t much left, and I was way too full to take more than a small spoonful, but hell, that was pretty damn good.  Softened Nilla wafers in this banana essence… it’s now on my radar to try more places and more versions, and check out all those places I’ve heard have good renditions.  Mmm, Sugar Sweet Sunshine, I’m coming for you…

Yvo says: Everyone loved their food and said they’d go back.  I wouldn’t mind going back to give it a better try when I’m not feeling all out of sorts and sick to my stomach from other stuff, but I did enjoy most of what I ate and felt it was a really good deal at $12.99 all you can eat (and a bit of a waste at my one plate, $12.99).  But c’est la vie.  The fried chicken thighs were legit.  (And afterwards, we walked from Harlem down to East Village for the hell of it.  It was a nice day and good exercise to work off all that fried fatty goodness we ingested… ooh.)
recommended