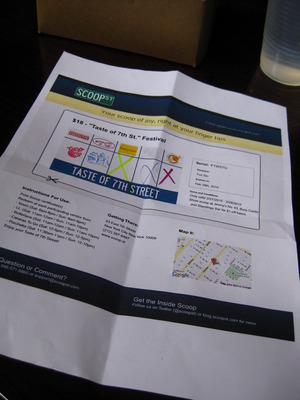 TT sent me a link to Taste of 7th Street, where for $18 you get a ‘taste’ of five different establishments along 7th Street.  I’d wanted to try a couple of the places included anyway, so this seemed like the perfect opportunity to do so at a discounted rate 🙂 (the above is my ticket with all my stamps) 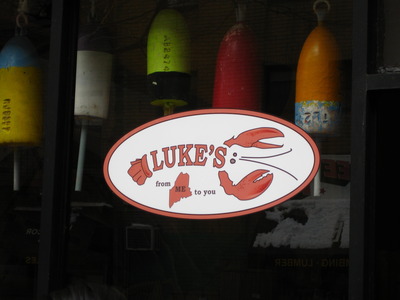 Our first stop was Luke’s Lobster.  I’d arrived a lil late, so I wound up jumping on line with TT, CT and TC and skipping the wait that was forming.  Phew.  Sorry to those I skipped! 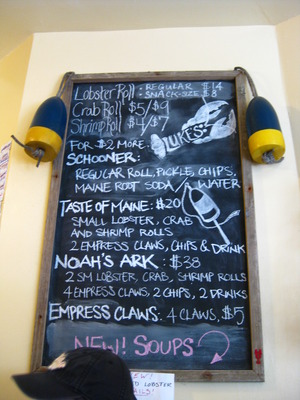 The menu is rustically written on a chalkboard by the registers.  Cute. 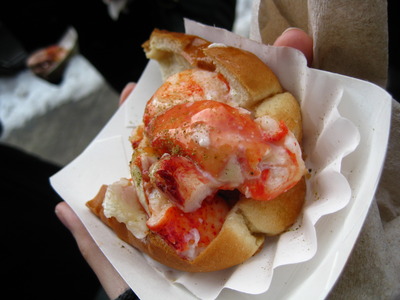 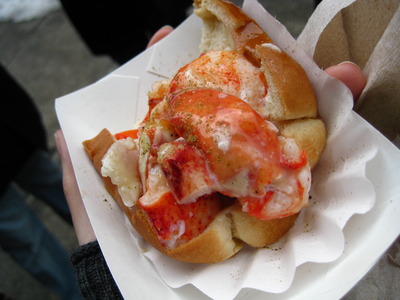 While I can’t honestly say that’s expensive – comparatively for lobster rolls, it isn’t that bad… but if I’d paid $8 for this, I’d be really mad!  As for the lobster roll – well, they were generous with the butter-soaked lobster meat, and I loved seeing the claw meat on top (I like claw meat over tail, to be honest).  It was well-seasoned; someone said Old Bay but I didn’t detect that light burn from Old Bay, though I distinctly tasted celery seed, which was nice as there was nothing on this sandwich beyond buttery lobster meat.  However, I’m a huge fan of mayo in general, and without a small swipe of mayo in this roll, I couldn’t honestly say it was my very favorite lobster roll.  I need the mayo.  Pearl Oyster Bar continues to be my top ranked lobster roll!

(Also of note: a short while later, I noticed that slightly fishy taste in my mouth that I get when I’ve eaten slightly-less-than-super-fresh-seafood.  TT said he didn’t notice anything, but I know what I tasted… Oh well.) 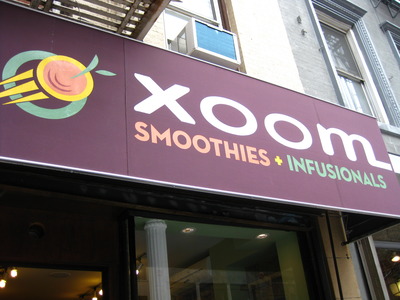 Next up: Xoom for smoothies cuz I was really thirsty! 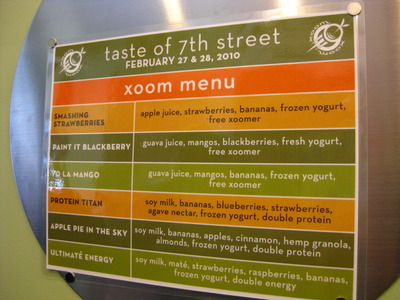 The special menu for the festival! 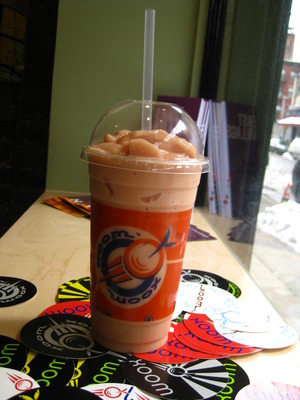 My Yo La Mango, which tasted more of guava than of mango, a fact that sorely disappointed me.  It was fine as a drink, just that I wished it would taste more mango-y, which is why I ordered it, also it’s in the name!  TT ordered the Apple Pie in the Sky and said it tasted like apple pie but slightly muted, and wanted the cinnamon/apple pie spices to come through more cleanly.  Interesting. 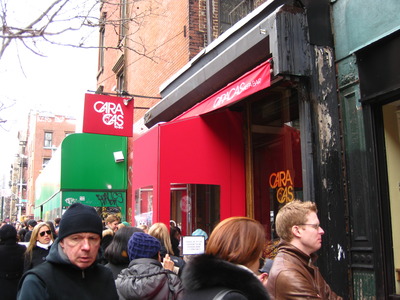 The line at Caracas as we were leaving… CRAZYTOWN!  We’d gotten there when the festival started, so we’d been able to slip into Caracas during a lull in the line and order.  We were told to come back 20 minutes later. 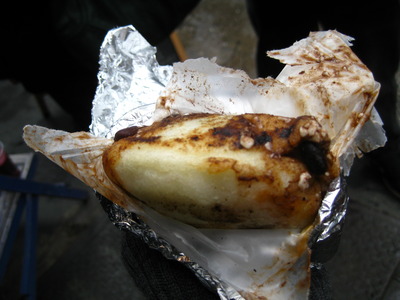 My arepa… which I opened on the wrong side, whoops! 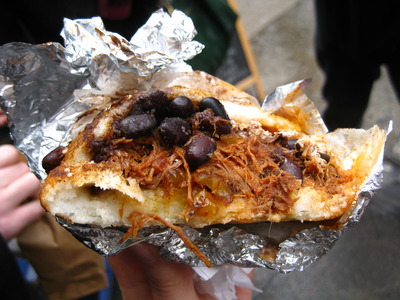 Here in all its glory. 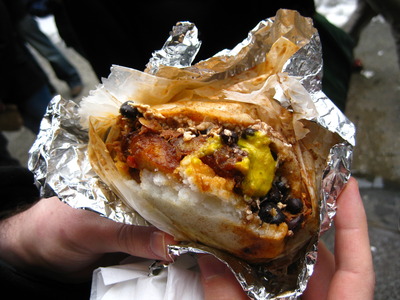 TT’s arepa, on which he’d slathered some of the provided sauce.  I was happy enough with the goodies encased in my arepa not to even want to try the mustard (?)… To be honest, I loved the insides – pulled beef, beans, cheese, DELICIOUS.  However, I just wasn’t a big fan of the exterior – could be crispier, and well, it’s made of corn.  I don’t like corn bread that much and I actually don’t like corn tortillas (soft) at all (I like the flour ones) – I haven’t met a corn-carb/starch product offhand that I really love (aside from hard tacos and/or Fritos, omg so good), but the innards of this – well, I took a fork and just ate out all the insides.  And they were delicious.  I think I’d like to try this place another time with less of a wait and maybe sitting down so I can properly enjoy the components as I choose! 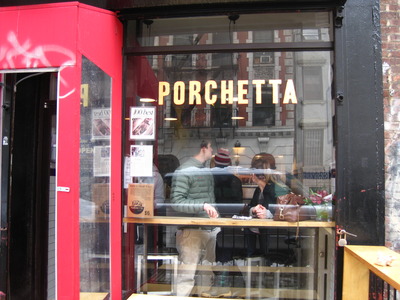 After that amazing porchetta sandwich in SF, I’ve been eager to get over to Porchetta.  However – as you can sort of see – the place is TINY, and I just never have the opportunity to go there (I’m with too many people, or just not the right mood, or I forget)… so this was a big draw for me. 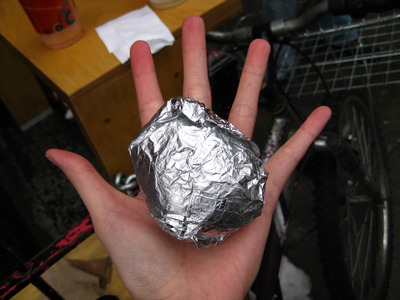 There was no line to get our food at Porchetta; they’d wisely made up a bunch and just handed them out as you walked in to redeem your tickets. 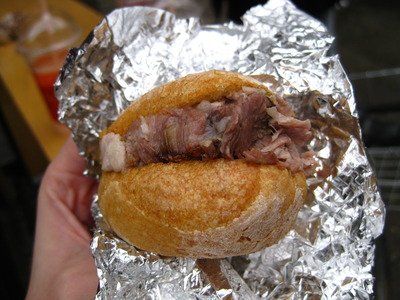 Look at that meat!  The succulence peeking out… nommy… except the bread was a little too hard and the meat a little dry.  I am going to chalk this up to being pre-made, though, and give them another shot… soon.  Soon, my precious… 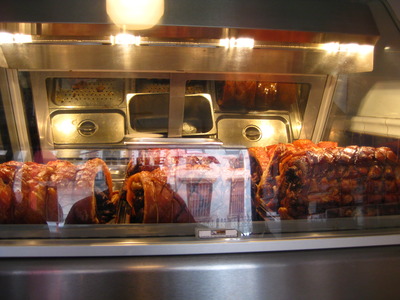 LOOK AT THAT DISPLAY CASE.  That’s what I want!!! 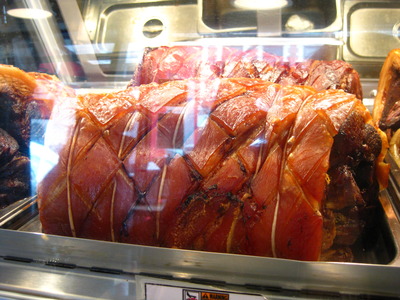 Gloriously crisp pig skin… drool!!!  I asked about getting a whole one, and I believe they said it was $25/lb, and each is about 8-12 lbs.  They will slice it for you if you wish, though this does run the risk of drying out… omg, I have to have one… gimme gimme!  (Next Feisty Family feast may just feature one…) 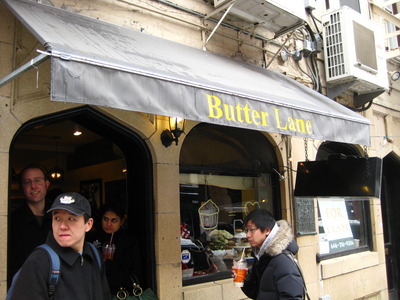 Last on the list was Butter Lane for cupcakes!  You can see the group of yahoos that I accompanied to the event, too. 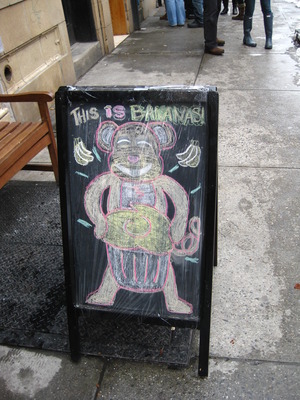 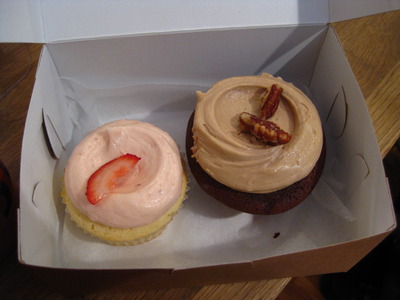 And finally, the two cupcakes – vanilla with strawberry frosting, and maple pecan.  I gave these to BF, my resident cupcake expert taster, who actually said he really didn’t like these.  I wasn’t physically there when he ate them, so I didn’t get a full read on why he didn’t like them, but I do know he didn’t finish them – which is a big sign of dislike, he usually eats the whole sweet before telling me he doesn’t like it.

Yvo says: Overall, a fun experience, and I will definitely be back to Caracas and Porchetta for more.  The other places were alright but probably not places I’d seek out on my own… just not my thing, really, not judgement on the place itself – except Butter Lane, which is both not my thing and apparently, BF hated them, so I will not be going back there at all.
recommended festival – I hope they have this every year!