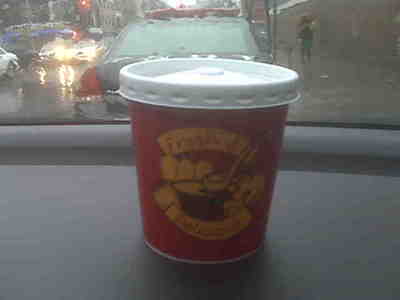 Total FAIL today!  The sweetest most awesome BF in the world planned a nice day for both of us and I somehow managed to completely forget my camera at home!  I haven’t done that in … a very long time.  I was kinda sad because we had some good eats (a LOT of good eats, actually) all day but I still didn’t get to take any pics.  Grrr!  So expect a photo-less pic coming up… let’s see how that fares with people who like pictures!  The above was taken with my Blackberry, whose camera is not the greatest… but it’s a cup of soup that was awesome, and a great part of our random, whimsical lunch.

Of course, this was during the monsoon/typhoon… but a great adventure was had in any case.  Driving around all day, from comic book store to comic book store, searching for a specific TPB for the BF, wandering from food establishment to food establishment (including Broadway Panhandler to see my girl E-dee-licious and pick up a cutting board!)… amazing day in the city with my amazing BF <3 until we drove back to his place in Howard Beach, where we discovered his street roped off, the FDNY standing there not letting people turn onto his street, telling us that there were fires, floods, and electrified water.  The entire street was flooded and some wires went down, so it was really dangerous.  I started panicking because our doggies were in the house that we couldn’t see or get to.  Poor babies were probably terrified!  Some maneuvering later and we were in the cold, dark house with the pups, snuggled down under the covers… the perfect end to the perfect day, no?