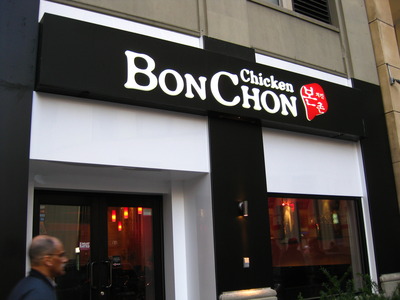 I’ve tried BonChon a bunch of times but always at parties or get togethers where I haven’t taken photographs and haven’t had to deal with the idiocy I’ve heard is involved with ordering from BonChon.  Besides, I was never so in love with the chicken anyway. 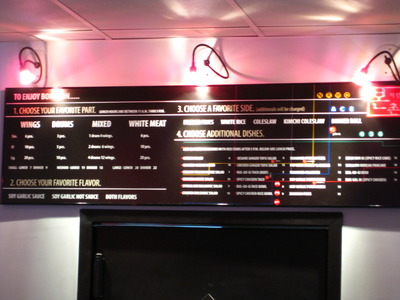 Blurry photograph of the menu.  It was super packed on the 2nd day it was open and the line was moving super slowly.  In fact, when I was 3rd on line, I realized why it was moving so slowly: the man at the cash register was answering the phone and taking those orders before any of the people who were actually in the store.  Umm… FAIL. 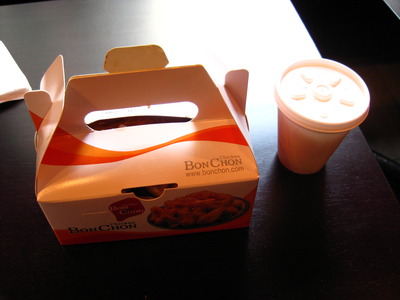 When it was my turn, I asked them what would be fastest, and luckily, that was what I wanted to order, anyway.  Small wings (6 pieces) and fries.  I kind of wanted a healthier side, but by this time, I was so hungry I wanted whatever I could shovel in my face the fastest, which would be fries. 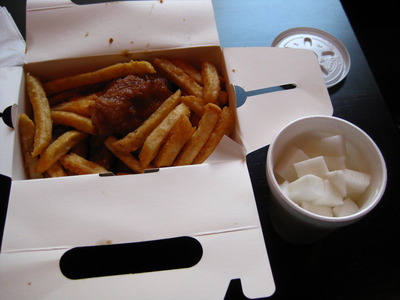 Looks pretty damn good, right?  The box was filled with fries, and the wings tossed in haphazardly. 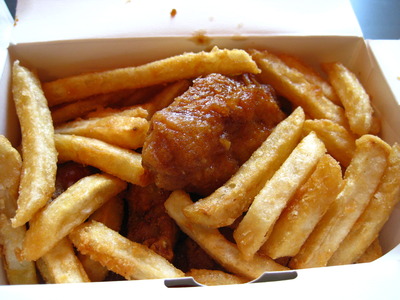 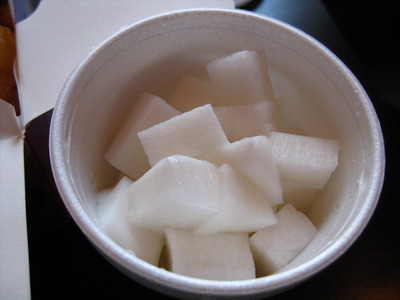 This small cup of pickled radishes was way too much for one person to comfortably eat without getting sick and/or really gassy.  I ate the whole thing.  🙂 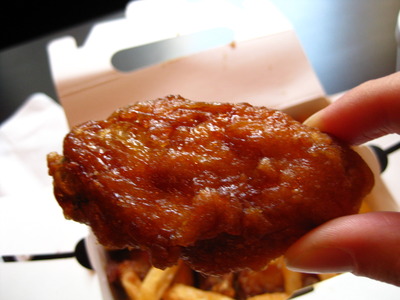 Here is my wing.  Okay, it was pretty damn good.  It’s not that close to my office to go all the time (and I’m told that there is actually a cafe nearer to the office where I could get Kyochon wings – Kyochon being my favorite for Korean fried chicken), but if they work out their service issues (or if you just call ahead, since that seems to let you skip to the head of the line), I could see this becoming a great go-to place for Korean fried chicken; soy sauce, garlicky fried wings with a great flavor and crispness.  (And if you like it hot, they do hot.) 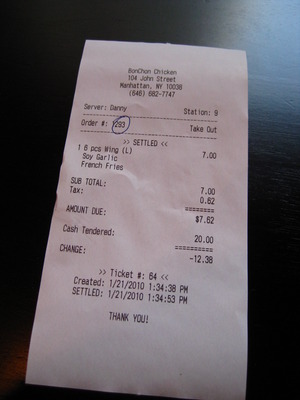 One other service note: when I ordered, the guy who took my order circled the “order number” (see circle at top of receipt) and told me to listen for that number.  I sat down and waited for them to call my number.  The woman kept calling order numbers and no one was responding; I wanted to get up and say “I’ll take whatever that is” but figured I should not be so impatient.  Finally, she started checking receipts and came over to me, and I said “No, I’m 93, that’s what he said,” and she mumbled, “No, you’re 64, that guy is new, he doesn’t know yet,” and handed me my order.  64 is the ticket number on the bottom of the receipt.  Now, I understand these things could happen, but the woman had just blatantly lied to me by telling me that the guy was new.  How do I know this?  Because while I sat there, I witnessed the guy greet a delivery guy and explaining to someone else what that guy was delivering; by his words, gestures and attitude, it was clear that the man who had taken my order and told me the number to listen for was the owner, not some random new guy who didn’t know better.  They really need to get their ish straight.  Hopefully that’s happened since I went (January 21, as you can see by the receipt).

Yvo says: I’m sure it’s a great addition to the neighborhood (now that I’m no longer there!).  I heard some people on line talking about how great the food is at the one on Chambers, except they hate how disorganized the ordering system is.  That one has been there for a year or two, so I’m not sure what that means for this location.  The wings were pretty good – much better than the times I’ve had it ordered in, honestly – and yes, not cheap, but not too expensive either.  It is what it is, I suppose.  If you like Korean fried chicken, you’ve probably already been to one of these locations… but I’d still recommend it for at least comparison’s sake.  (Also, please note, on another blog they said this is too little food (the ‘small’ offerings).  This is not too little food if you’re me.  I’m not a small eater.  I’m not a huge guy who eats 2 lunches a day, but I’m not a small eater.  Take that into consideration when you’re ordering lest you order way too much.)
recommended