TT recently told me he was planning on taking his girlfriend, CT, to check out a few Restaurant Week restaurants, so of course, I asked him if he’d mind documenting the experience(s) for me.  He jumped at the opportunity to be immortalized here on Feisty Foodie – there’s no cred in him saying I had to “convince” him to do this 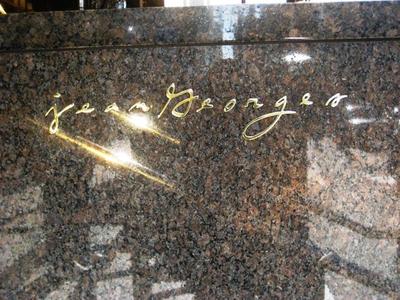 This was my 2nd trip to Nougatine.  I was there for my Dad’s birthday last spring.  It was then we learned that they do a prix-fixe all year round.  We had a great meal, so I was more than happy to return when CT mentioned that she had never been here before.  As a return guest, I knew exactly where to walk in.  I will admit during the first visit it took a little while to figure out where the entrance to the restaurant is as the sign is not very distinguishable from the sidewalk.  We were warmly greeted by the hostesses and had our coats checked.  We lucked out that this Sunday was particurlarly sunny as the restaurant has floor to ceiling windows.  (JG is located in the Trump International on the north end of Columbus Circle overlooking Central Park.)  The Nougatine part of the restaurant has a very clean, fresh look that is made that much better by rays of sunshine.

After being seated and presented with menus, we were delighted to see the large selection of choices for the restaurant week menu.  You can choose any two dishes and a dessert.  This could be a problem as there were so many things that sounded good.  CT and I were more than happy to order our top choices and share. 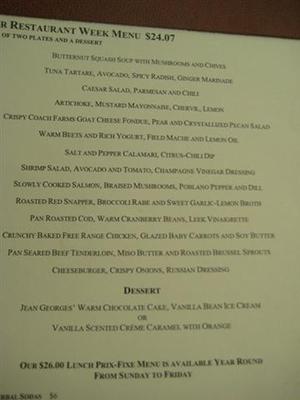 We were presented each with a slice of cold, yet yummy sourdough bread from the extremely attentive busboys.  A request for olive oil for dipping was promptly filled.

I decided to start with the Salt & Pepper Calamari with Citrus-Chili dip. 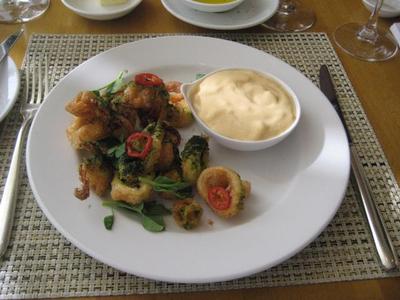 A great presentation that was very visually appealing with the green sauce and red chillies on top of the lightly fried calamari.  The calamari had a great salty flavor accented by the heat of the pepper(maybe I shouldn’t have eaten the entire slice at once), with some slight coolness from the dip.  We found it odd that we were given so much dip, way more than what was necessary.  I did not get much citrus-chili flavor from the dip when eaten with the calamari.  On its own, it did have a nice delicate flavor. 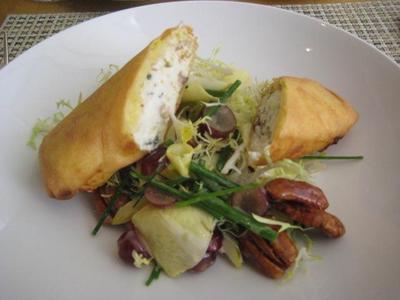 Jean Georges really prides himself on presentation and each dish is plated beautifully, this one being no exception.  The best way to describe this dish is a goat cheese egg roll.  We were both unsure how this can be described as a fondue.  The “egg roll” was also lightly fried with a great, strong goat cheese flavor.  It was accompanied by one of the freshest fruit salads either of us had ever had.  The grapes and pear had that great crispness that really added so much to the dish.  The frissee was perfectly dressed in a very light vinagrette.  I am just noticing now, but the salad had walnuts, not pecans.  I am all about having nuts in a salad, so the discrepancy was not an issue for me.

Next up for me was the Crunchy Baked Free Range Chicken, Glazed Baby Carrots and Soy Butter. 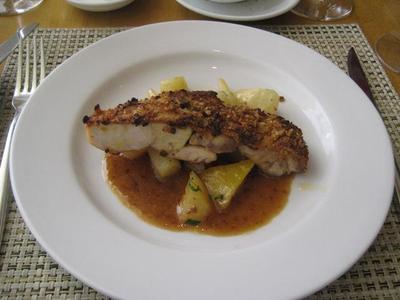 I am in the group of people that usually don’t order chicken is a restaurant, but as it was a Sunday afternoon, I was trying to be healthy.  The calamari was my “unhealthy” dish of the day and I couldn’t justify getting the beef tenderloin for lunch.  The chicken definitely exceeded expectations.  It was reconstructed with tender pieces of dark and white meat with a nice crunchy top.  The sauce had a great salty/sweet flavor.  I am pretty sure the “carrots” were parsnips, unless they were white carrots?  They were covered in the same sauce so whatever they were, they were happily gobbled up. 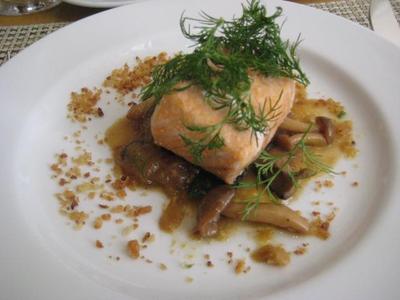 I believe my parents had this dish when I went with them and they enjoyed it very much, so I recommended it to CT.  The first observation when presented with this dish- THAT’S A LOT OF DILL.  It was also very fresh dill, so much so that I could smell it from across the table.  The salmon was perfectly cooked being moist and delicate at the same time.  I am not the biggest mushroom eater, so I couldn’t tell you what kind of mushrooms they were, but they were also tasty.  Bread crumbs were a welcome addition to the plate to give some much needed crunch.

For dessert, there were only two options so, of course, we got both. 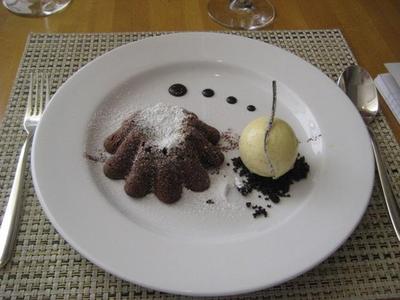 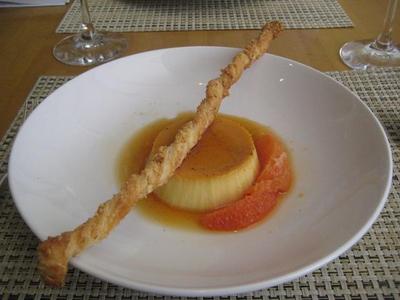 The chocolate cake is JG’s signature dessert.  It was very decadent, but a little overcooked.  The cake did not ooze that much when cut into, though what did come out still tasted sinfully delicious. 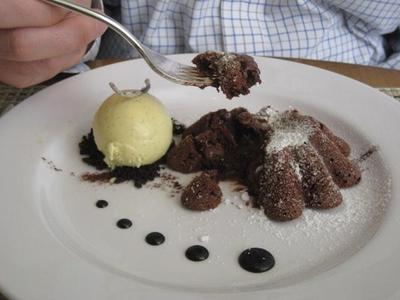 The accompanying vanilla ice cream tasted home-made with real vanilla bean and complemented the richness of the cake well.

The creme caramel was light, not too eggy, and came with a HUGE phylo “stick” that was wonderfully crunchy with just a touch of sweetness.  Once again, the menu slightly differed from what was received in that we had grapefruit instead of orange. Still, the grapefruit supremes were a very nice addition to the plate both visually and in flavor.

All in all a great lunch, especially for $48.14 plus 2 glasses of wine, coffee, and tip.  Our waiter could have been a bit more attentive, but the busboys more than made up for that.