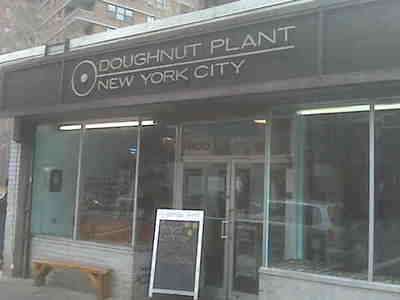 A recent jaunt through the city for hand pulled noodles left me walking past Doughnut Plant.  (Forgive the Blackberry pic; it was really cold so I just took my phone out and snapped the above photo instead of taking out my P&S camera.)  I decided to give a donut a whirl – yes, I’m always about a year or two behind on trends, forgive me – as soon as I walked in, I knew what I was going to get. 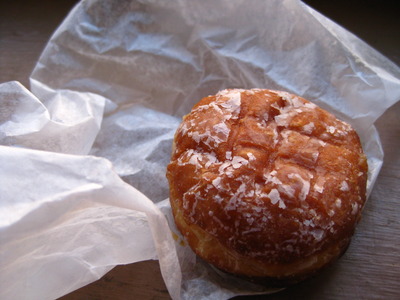 The creme brulee donut was the first choice; BF loves-loves-LOVES creme brulee, so I knew immediately he would try this and tell me what he thought. 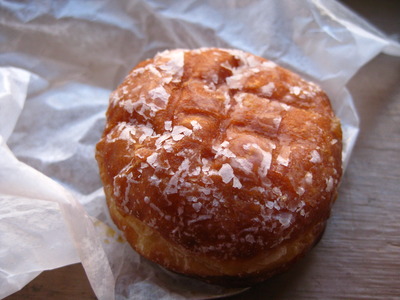 I took these photos an hour before I saw him, or he would have snatched it out of my hand and not let me take photos.  So, this donut is actually pretty small – about half the diameter of a regular donut.  However, BF bit into it, asking me the whole time, “Creme brulee?  Is there just creme inside?  What makes this – ” and I had to hush him “I don’t know, I never had a donut from here before, I bought this for you, just eat it and tell me what you think.”

After a moment of chewing and silence, he swallowed and told me, “Wow.”  Another pause and “This is a really well thought out pastry.  Write that down.  Use that.  ‘Well thought out’ – that is exactly how to describe this.  There are crunchy sugar crystals on the outside that almost taste burnt, and then the creme inside tastes exactly like a good creme brulee should, beneath the burnt part.  Wow.”  Another pause and then he admitted he thought I’d overpaid for the donut, but he could see why it cost what it does.  (I paid a little over $5 for two donuts, though I don’t believe the donuts were priced equally.) 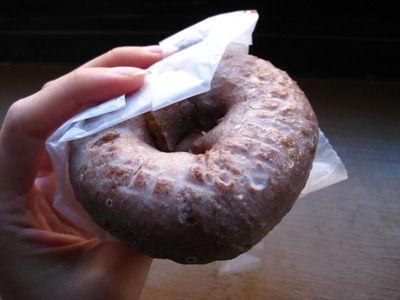 Of course, as soon as I walked in, I also knew I would be getting the tres leches donut.  I love tres leches. 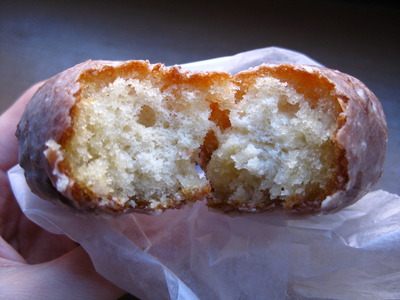 From browsing reviews, I’d thought I’d read there would be some oozy cream on the inside of this donut, but when I bit into mine, nothing creamed forth.  Ah well.  I enjoyed my donut greatly, but I did not have the same kind of near-religious experience that BF did with his.  I think I’d have to try something else the next time I go back – and yes, there will be a next time; BF and I actually used to frequently brunch quite nearby, so I can’t imagine not picking up a donut or 6 the next time we’re in the area.

Yvo says: I’m late to the donut-trend-scene, but that isn’t surprising given that 1- I watch my weight, 2- I vastly prefer savory items to sweet, and 3- well, I heart Krispy Kremes fresh off the belt.  Why mess with what I considered perfection???  In any case, what I’ve tried so far has been pretty damn good, so I imagine I will continue trying (and reporting back) as time goes on… and I may just have to stop watching my weight.  Except watching it go up… sigh.
highly recommended creme brulee donut – if they put so much attention to detail in all their donuts as that one, well, we’ve got a winner.