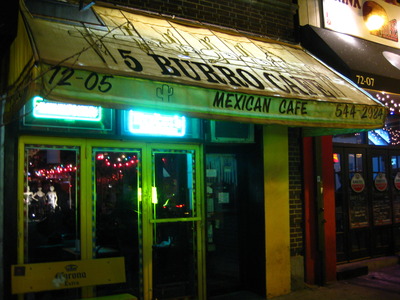 When I first moved back to Forest Hills two years ago, I did my share of research on food options near me, and asked everyone around me if they had suggestions.  5 Burro Cafe made frequent appearances on various forums, but also many people absolutely RAVED about this place.

Unfortunately, every time I tried to go inside, it was super packed and busy.  BF and I tried to go a good number of times but the wait generally extended over 30 minutes and beyond, at which point we’d both glance at each other, turn around, walk out and head down the street elsewhere.  However, on January 7th, the wait was marginally shorter (they told us 15-20 minutes; I asked a few people coming out if it was worth the wait, to which they enthusiastically responded “Oh, hell yea!”), so we took our chances.  The wait turned out to be only about 10 minutes. 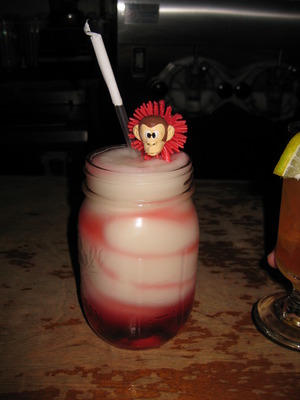 While we waited at the bar, I ordered a watermelon margarita, which I’d heard was good.  Look!  Here’s a monkey they placed on my drink – the one I wanted to keep but when I turned my head, the bartender took him and threw him away 🙁 but BF saw my sadface and asked the bartender if we could have another monkey.  He handed us two toys but neither were monkeys (monkeys have a special meaning to us).  The margarita was OK, and confirmed once again that I don’t like sour mix. 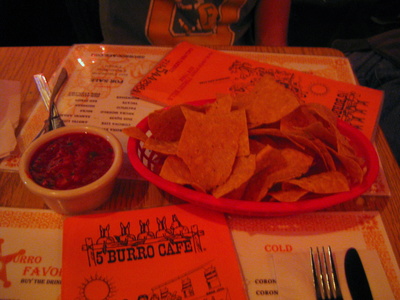 When we were seated, this greeted us – housemade tortilla chips and a really nice salsa.  Not too spicy (both BF and I aren’t huge on spicy food) but not too mild, either, BF commented on its textural similarity to jarred salsa.  “Not like that, y’know, fresh chopped stuff” – pico de gallo, I presume.  He actually likes the ‘saucy’ kind of salsa, so this made him happy.  (I really like pico de gallo, but I like salsa in general, too.) 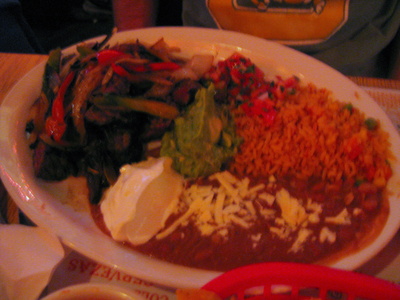 After a bit of peering through the menu, BF opted to get steak fajitas and built his own happily, munching away.  The platters come with all you see above – there’s a bit of pico de gallo there – though the BF’s fajitas seemed pretty plain, hehe.  My baby does so enjoy foods without too much slapped onto it… 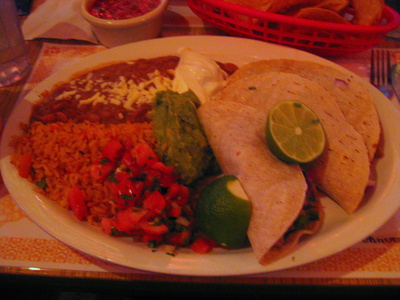 I decided to get a pork taco platter – especially since the menu described it as ‘tasty pork & cilantro’ – yummmm! 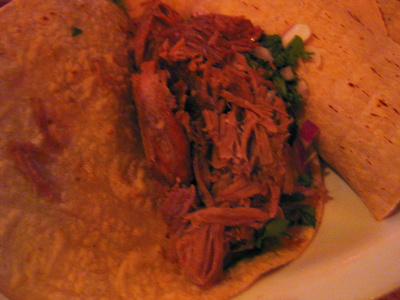 And boy howdy, it was tasty!  Super tasty.  We were both extremely pleased with our platters.  I inhaled much of mine, then took away the tortillas (I really don’t like corn tortillas; personal preference) and packed the rest to go.  Heating it up the next day (minus the guacamole and sour cream), I had a nice big burrito bowl of sorts.  DELICIOUS.

A point to note is that when we ordered, I’d turned to BF and said “Do you think we should get an appetizer to split?” and the waiter smiled and interjected “No, that’s a LOT of food you just ordered” – even though we’d just ordered the entrees each.  It wasn’t like he was trying to boost our bill – he just really meant “You guys ordered tons of food already, it’s fine.”  Nice.  (BF also had leftovers that he took home and fed to his dog.) 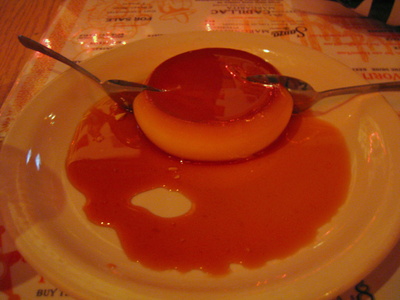 BF really wanted flan.  I’m pretty sure it’s not housemade, but he liked it enough.  I am not a big flan fan, so I took a bite and that was it.

The atmosphere of the place is super casual, laidback, a bit cramped, but a ton of fun.  BF REALLY liked the place (a bit surprising as this isn’t really his favorite cuisine); as we left, he remarked that this might become one of our new go-to places. 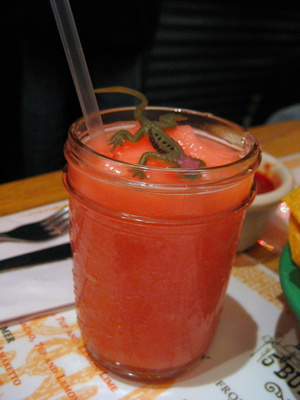 In fact, we returned shortly after for a pre-movie bite.  I requested a strawberry daiquiri; I really just don’t like that slightly sour taste that comes with margaritas (sour mix?).  Unfortunately the waitress apologized that the blender was out of service, but I could try a strawberry margarita which tastes similar.  When I hemmed a bit, she offered to bring me a mini one, which was perfect.  It was tasty, but reiterated the point: I don’t like sour mix.  I drank it anyway, and was happy she’d offered the smaller one to me.  (Price difference: $5 for the mini above, 8oz I think? and $8 for the full 16 oz.) 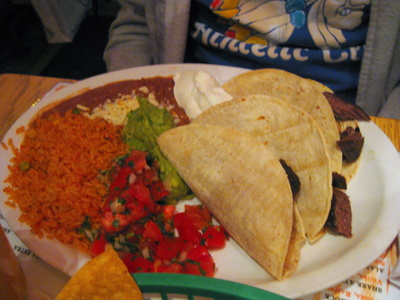 BF had started by telling me he just wanted beef tacos, but when he ordered that, the waitress asked “Steak or ground beef?” and he immediately said “Steak.”  I don’t know, I thought it was cute. 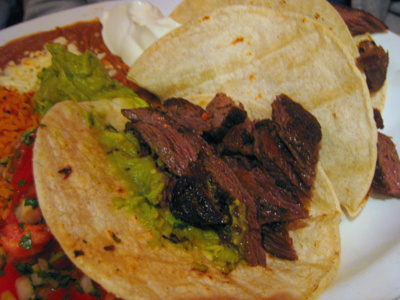 He insisted I take a shot of the inside, too, so y’all could see the steak.  The steak was super tender – like in his fajitas – skirt steak, I believe, maybe flank – marinated and super flavorful, soft.  These were schmeared with guacamole on the inside; BF actually really does not like guacamole but to my surprise, he ate it without much comment.  I know he liked his meal very much, though again, we had enough leftovers to pack up and make for a good meal later. 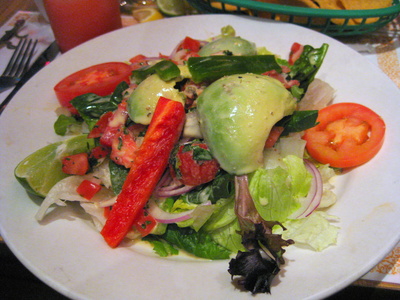 I wasn’t that hungry, so I opted for the ensalada mexicana, the Mexican salad.  You can get it with a protein (shrimp, beef, chicken, I think also pork), but as I said, not that hungry, so I chose just the salad.  Topped with strips of peppers, tomatoes, dressed avocados!, and pico de gallo, this salad was REALLY GOOD.  Obviously you have to like salad in general – and BF complained that it was too ‘leafy’ (he saw me forking together a bite and requested I give it to him; I obliged, but it was indeed a leafy bite, not a crunchy bite since I’d already eaten all the crunchy parts of lettuce in the salad by that time), which I concede, it was mixed greens, my less preferred salad style.  However, it was well-dressed with a lot of zing… and I really liked it.  Especially the big hunks of avocado that I broke into pieces to eat with bites of other stuff… nommm

Yvo says: This place is a great find in the neighborhood.  Tons of food for cheap prices, good drinks with small price tags, and location convenient to pre- or post-movie dining.  It’s already working its way into our roster of places during date night.  Yum!  I can’t wait to eat through more of the menu!
recommended