I’ve mentioned both Wah Mei and NYC Cravings before, but I had to go back and do a full comparison. 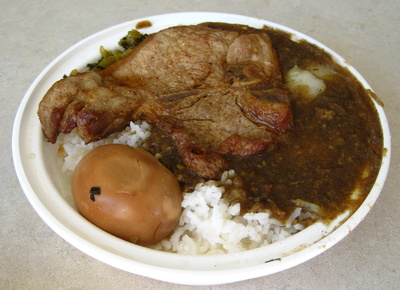 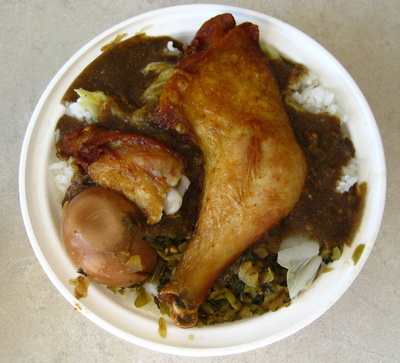 Chicken leg over rice with one tea egg, pork sauce, and veggies, also from Wah Mei – $4.90 (it’s normally one big chicken leg, but as this one was on the small side, they threw in that little wing piece – no, I didn’t ask for it, they did it on their own) 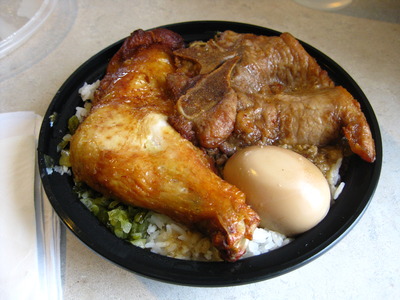 Porken (one pork chop, one chicken leg) with one tea egg over rice with pork sauce and some pickled mustard greens, from NYC Cravings – $7

Honestly, they are all very similar and very delicious.  I think each place has its pros and cons – let’s face it, when it’s cold out, and I’m feeling a bit lazy or perhaps have to study, and the NYC Cravings truck is parked almost right outside my office building… that’s where I’m going.  On the other hand, in nicer weather, when I don’t mind doing a little running around, or I want to pick up some stuff for dinner from around Chinatown, too, or my wallet is feeling a bit light, I will totally make the run over to Chinatown for Wah Mei.  Bear in mind, however, though I am close enough to Wah Mei to go during my lunch hour, if you factor in the cost of your train fare, it isn’t actually cheaper – $4.90 + $4.50 (round trip train on a pay-per-ride MetroCard) = $9.40.  So for those naysayers that hate on NYC Cravings all the time for prices, and screech that it’s SO much cheaper in Chinatown – yes, it is, if you’re already there, or if you don’t factor in the transit price.  For convenience and taste, I think NYC Cravings is perfectly suitable for lunch, and is a reasonable price as well.

***Please note: I have taken two coworkers to try each.  One of them likes Cravings better; that was the first place he’d ever had this sort of dish, and he said Wah Mei is too salty for his tastes.  My other coworker actually likes Wah Mei better, and has had this dish at other places all around the world before.  Take that for what you will.

Yvo says: I like both places for what they are – and nothing more, nothing less.  I’m not claiming either is the best of its kind – because people have already told me that I need to check out 2 other places in Chinatown for this specific dish before I make any final conclusions! – but rather, that each is very tasty and very worth their respective prices, with a list of their own pros and cons.  Yumm!
recommended

www.nyccravings.com
Check Twitter to see where they are that day!