I had the good fortune to be able to score tickets to Hamlet before the show closed… and I think I’ve only mentioned briefly my love of theater (watching, not participating!) here, but it is one of the things I absolutely adore about NYC.  (About 4 years ago, I set out to see one show a month, and did this for about a year before it got too expensive and I’d seen nearly everything I wanted to.  It was awesome.)  In any case, I just read Hamlet for English class this semester (nope, I never read it before), and watching it performed live was incredible.  But even better was just how amazing Jude Law’s performance was!  I had heard mixed reviews, but I didn’t expect him to be as good as he was.  The passion he brought to his Hamlet; the touch of crazy; the humor – oh yes, he was very funny! – the absolute brilliance was just amazing.  Even more amazing was getting to meet him after the show; I hung around for a short bit and when he came out, he signed my playbill, I said, “You were amazing,” (and I meant it! I never say that!) – and he looked straight at me, smiled this tired but genuine smile, and said simply, “Thank you.”  I wasn’t a huge Jude Law fan before, but this totally pushed my like of him higher.  *squee*  Okay, enough fan-girl gushing, the point was just that I was in need of food before Hamlet recently, and I ended up at Xie Xie.  Not for lack of choices, either – I posted on Midtown Lunch forums asking for suggestions and had a TON thrown at me (yes, I hang around the forums over there, even though I don’t work in Midtown… haha). 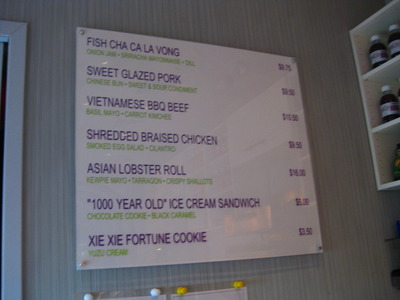 You might recall I tried to go here before too, which definitely pushed it to the top of the list of suggestions… After glancing at the menu, I asked my buddy what we should get (we split everything).  Immediately chosen was the BBQ beef, but when I offered a choice between pork or lobster, my question was met with an eye roll and “Lobster, duh.” 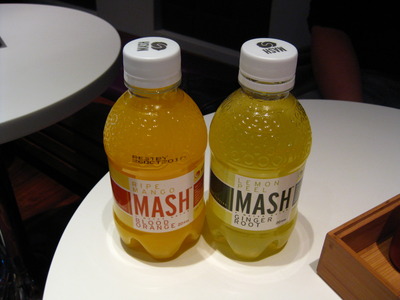 I saw these drinks in the fridge and had to grab one.  Ok, yet another testament to how weird my friends (and I) are – when I grabbed the mango/blood orange one, and my friend said “Damn I wanted that one.”  There’s more than one! but my friend chose a different drink anyway, which he wound up not liking.  I loved my drink and have been casually looking for it so I can buy more – there isn’t much carbonation to it at all, and it totally tasted like mango/blood orange.  So good.  The other one was too ginger-y for my tastes. 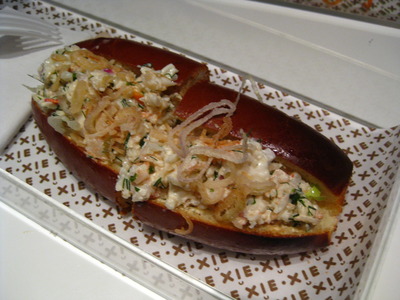 The lobster roll was pretty good – enough lobster, and I loved the crunchy shallots on top! (They cut it in half at my request; it came whole otherwise.)  It was good, though not on the large (or small) side of things… just average.  I don’t know that I’d say it was worth the price paid… but it was very tasty with tarragon and all.  A little heavy on the mayo, which dripped down the side of my hand to my chagrin.  Of course, my friend had no such problems, so I chalked it up to me being a lil retarded. 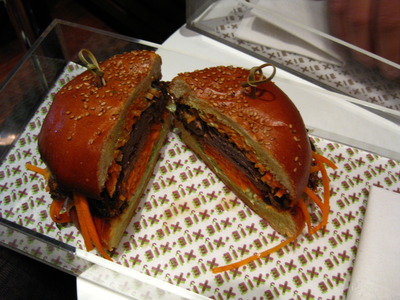 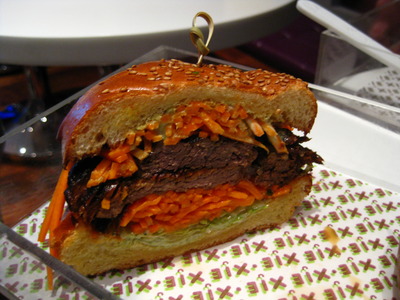 The beef was very tender and aromatic.  In fact, it reminded me of that Chinese dish ‘aromatic beef’ – the beef is falling apart tender, but manager to stay together somehow.  It was that same kind of mouth-feel as you bit into it, and almost the same fragrance.  The carrot kimchee got to me after a while as too spicy, but luckily (depending on where you stand on this) there was a lot of basil mayo to cool my mouth down.  I really enjoyed the BBQ beef sandwich quite a bit… 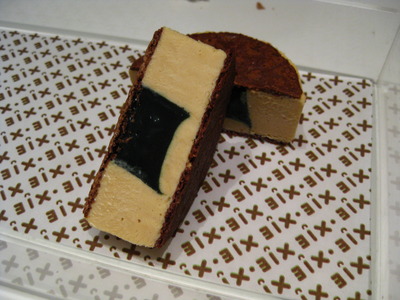 One of the major pulls for me was the Thousand Year Old Ice Cream Sandwich.

Let me first tell you something: I have never eaten a thousand year old egg.  Even though I was brought up to eat everything and very little ew’d me (I ate duck’s blood, intestines, chicken feet, ‘hair’ [it’s a sea veggie that looks just like hair], turtle, snake, shark’s fin, etc. all without a complaint and in fact loved some of those dishes to no end), I took one look at a thousand year old egg and refused.  I don’t know why, maybe it’s the clear glassy green hue of the ‘white’ of the egg.  Maybe it’s just the way in which it was presented to me (I couldn’t tell you what way that is, honestly).  I just know that I have never eaten a thousand year old egg and don’t really have much compunction to change that.

However, from the moment I saw this ice cream concoction, salted caramel in the description somewhere, I knew I had to have it.  I don’t care.  I want it.  Even if it looks slightly crazy with its black-green center (of black fleur de sel caramel) oozing out slightly.  AND I WOULD EAT IT AGAIN AND AGAIN AND AGAIN.  The thin, crisp cookie on the exterior shattering gently beneath your teeth, revealing a silky, creamy ice cream that smacks lightly of smoke,with an ooey, gooey, salty-caramelly center just this side of burnt… oh my STARS.  Just writing that makes me woozy with desire.  Intense, passionate, I-want-it-right-now-and-you-can’t-stop-me desire.  The kind of desire that has driven far better (wo)men than I mad… oh… I think this might be the dessert of my dreams.  Well, this and the salted caramel mochi from Nobu.  Oh my gosh… I am seriously light headed right now with desire.  For the mochi now, because now I looked up that link and had to look at it and read it all over again… mmm…

(My friend’s opinion: “It was good, I liked the lobster one.  The beef tasted like [something] I had before… lobster was new to me at least.”)

Yvo says: I enjoyed our meal at Xie Xie very much so – and was amused to discover later that the cute guy who took my ice cream order was the chef himself.  Since when are chefs built like that?!  But anyway, while I enjoyed it, I couldn’t say it will become a place I frequent often (except maybe for my ice cream sandwich… which will still be a rare treat).  The sandwiches were good, but not like, I-crave-that good.  Since it’s not in an area I frequent, either, I can’t imagine purposely making a trip up there and then heading to wherever I’m going to hang out.  And it’s not cheap – not expensive, but not cheap by any means.  Still…
recommended, especially that ice cream sandwich