Also on Saturday, happening around the sparkling wine session I attended, was the Afternoon Tasting Pavilion at the Metreon.  I didn’t take too many pictures for whatever reason, and don’t remember the names of everything, either.  I just know I picked up a ton of swag and lugged it around for the better part of the afternoon… which translates to a great workout!  And more prizes to be given away on the blog eventually.  Ha. 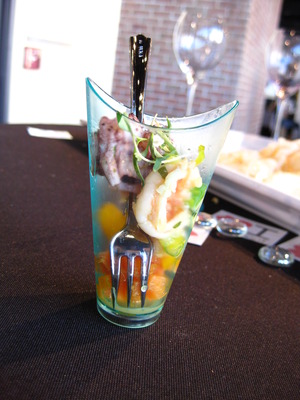 Some sort of ceviche that I recall being yummy. 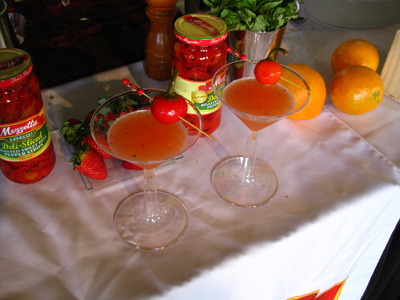 Mezzetta’s booth had these awesome basil-strawberry martinis.  Pretty yummy.  I wrote about Mezzetta once a very long time ago and how much I liked their jarred sauces.  I’ve since had the chance to try more of their products, and have not been disappointed yet.  I’ll write more about that eventually (once I’ve got all the pics sorted and a moment to breathe, really), but despite their slightly-higher-than-other-brands prices, I really think they’re great.  Even with the higher prices, because the ingredients are higher quality and you just get a much better end result, I think they’re fab.  Nom nom nom. 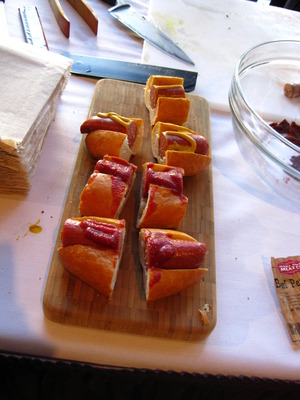 I unfortunately don’t recall where these hot dogs were from, but I had to take a picture because they are dressed with ketchup.  Hot dog snobs (?!), avert your gaze!  I totally dress mine with relish, ketchup, AND mustard, but I know there’s a large group of people out there who hiss if you even mention ketchup and hot dog in the same sentence.  Boo on you!  🙂 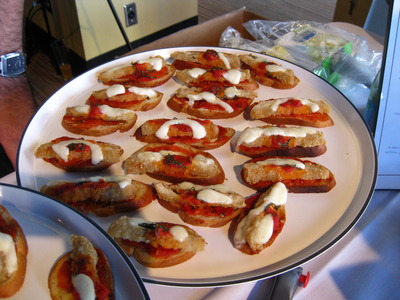 Bertolli was serving up crostinis and appetizer-bites, very tasty (I think that’s a picture of chicken cutlet bits on crostini).  They also gave away a ton of stuff – scraper-tongs, garlic slicers, meat thermometer…

I had a picture of Marc from No Recipes and Pim from Chez Pim standing next to each other, discussing their respective charity work in the food world – I snapped it because I thought it was excellent juxtaposition and, to be nerdy, showing how it doesn’t matter that they were both up for an award in the food charity category of the food blogger awards, the point isn’t to be ‘the best’ but rather to feed the world.  But then I decided I shouldn’t post pictures of people without getting their permission, and I was feeling lazy.  So, just know that they are both very cool people, super knowledgeable about food, and a ton of fun to hang out with.  🙂

Yet another fun Foodbuzz Food Blogger Fest event brought to us by Foodbuzz!  You rock!