The morning after we chowed down at the welcome reception & street food fare, we met up in the Ferry Building in the morning for pastries and coffee.  Unfortunately, I’m not much for pastries/sweets, so when someone mentioned the Golden Gate Meat Company downstairs was serving breakfast sandwiches, I was totally down. 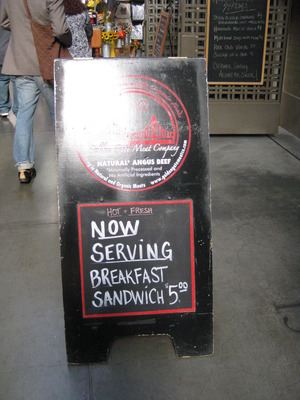 Nichelle of Cupcakes Take the Cake also wanted a sandwich, so we walked up to the counter and ordered quickly. 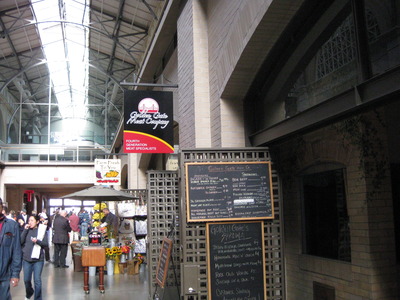 We had a choice of ham or bacon… I was sad there was no sausage option.  Nichelle decided on ham, but after I ordered the bacon, she wished she’d ordered bacon… so we decided to split the sandwiches to try both! 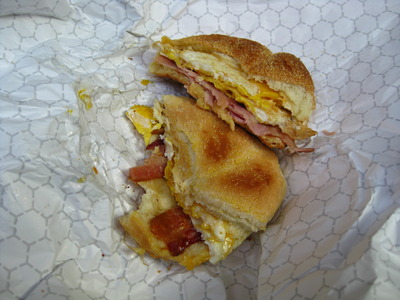 Bear in mind, all the sign says is ‘breakfast sandwich’ – and maybe I was expecting so much more because a few people had raved about how good the breakfast sandwich here was.  Ummm.  It’s a regular breakfast sandwich like most New Yorkers get from the deli downstairs from their office every morning… and pay only $3.50 (or so) for!  It’s ham or bacon/egg/cheese on a roll, that’s it!  It was tasty, but nothing that I’d be like “OMG it’s sooo good, go get one!”  Sorry.  Oh well.  Next time, I’m going to Boulette’s Larder for something yummier 😉

Yvo says: Pass on the breakfast sandwich unless maybe you’ve never had one of these things… I’m sure the other offerings are quite tasty though!  This was just nothing special… definitely not for $5, either.