I was recently offered the chance to try Dr. Oetker’s frozen pizza.

Dr. Oetker is a German brand/company whose claim to fame is being the best selling frozen pizza in Italy.  And now they’re available in the US.  Got that? 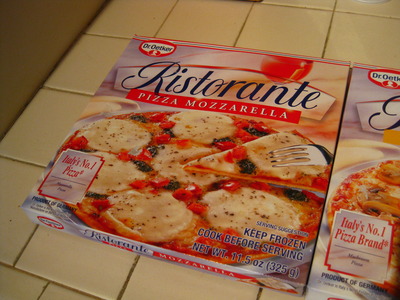 My boyfriend actually received the deliveries for me, and begged me to let him eat the pizza.  Without me.  Before I’d even taken photographs.  AS IF!!!  Hahaha.  His arguement was that he’d certainly eaten more frozen pizza than I had in his entire lifetime; while that may true, I’ve also eaten my fair share and just… no!  My pizza!  Hehe. 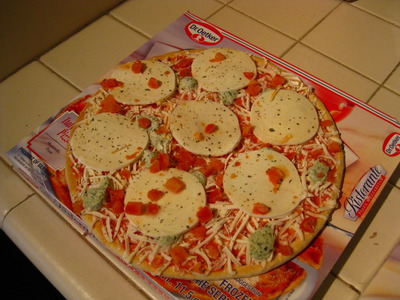 I pulled out the mozzarella pizza and was amused to see large rounds of cheese mixed with shredded bits, and frozen green globs.  I followed the directions exactly. 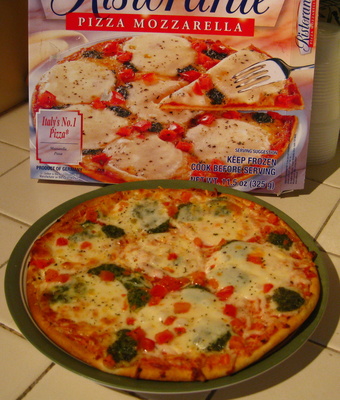 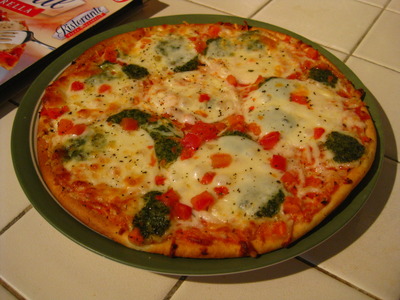 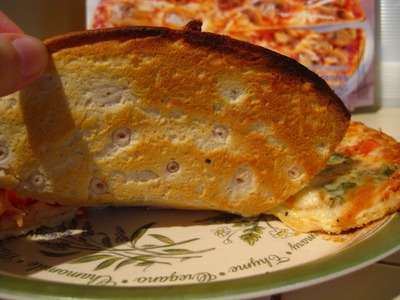 Upskirt.  The upskirt doesn’t really do the pizza justice – no, it doesn’t look particularly appetizing.  However, this was actually excellent frozen pizza.  Unfortunately, I haven’t been able to find it in a store near me to verify the price, though I’m told it should be $4.99-5.99.

What makes it excellent: the crust was crisp and thin, without any nasty pronounced cardboard taste like some frozen pizzas have.  It was a good base upon which lay some quality ingredients.  BF emphasized how much he really liked this pizza, and said it might become his go-to frozen pizza (and yes, he eats a lot of that, so this is a Big Deal with a capital B and a capital D!).  He did note two things: the pesto blobs really brought this pizza to an entirely new level, and that, more importantly, the entire pizza was light enough for him to eat without feeling disgusting and heavy, though he was still full after eating one.

**The only reason it “might” become his go-to frozen pizza is because we can’t find it in his neighborhood right now.  Waldbaum’s is the big grocery store out that way, so… someone do something!!! 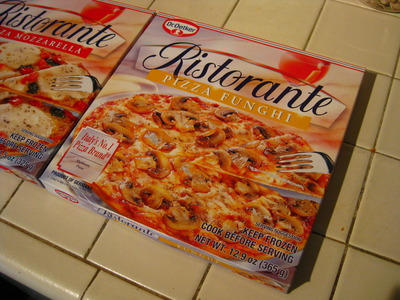 I tried the ‘funghi’ or mushroom version.  (And a bit of his, of course.) 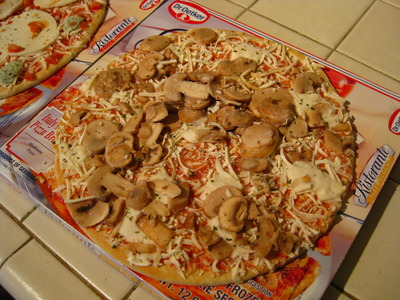 Right after taking it out, I noticed the uneven distribution of ‘shrooms. 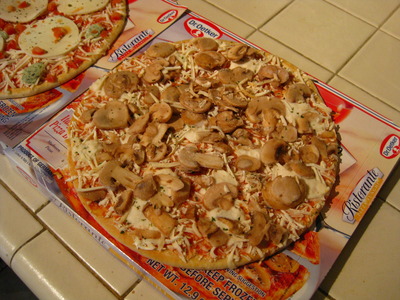 Problem solved!  I was a bit disappointed that they were all button mushrooms.  I wouldn’t have minded a mixture or a few portobellos/creminis… the flavor is so much earthier on those.  But I wasn’t too worried. 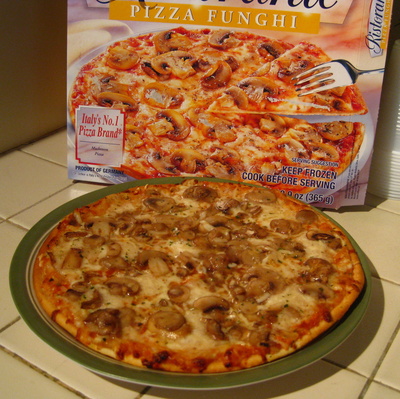 Out of the oven, compared to the box.  A pretty accurate representation, I’d say. 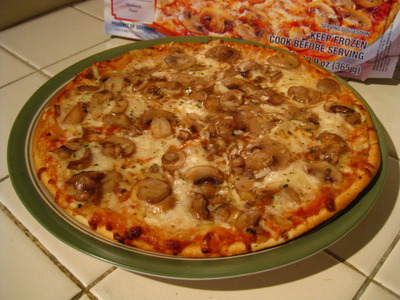 Closer up.  Do you see the problem in this photo?  The center of the pizza has a pool of moisture on it.  From the mushrooms was my assumption, since we didn’t have this problem with the mozzarella pie. 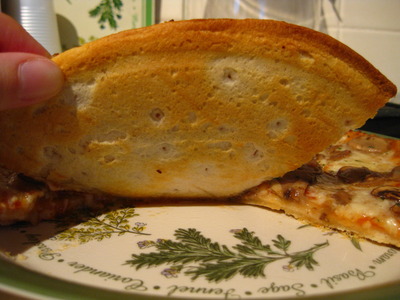 Again, you can’t really go by the upskirt, but the crust was crisp and held up well… except the ‘tips’ of each slice I cut, which was soft and a bit soggy.  As for the pizza itself, while the crust has a lot to do with how good a pizza is, it was only alright.  I really wished this pizza was simply the mozzarella pie, with mushrooms added on top.  Which means in the future, that is what I’ll do – buy the mozzarella pie and add whatever I want on top, instead of relying on their mushrooms.  Too bad.  I mean, the flavor was good/fine, but the mozzarella was just THAT much better!!!

Yvo says: I can definitely see stocking this in the freezer for the BF (and him stocking some in his own freezer!).  It’s a great frozen pizza with excellent crust, good flavor (the mozzarella), and makes an excellent meal for one or a snack for two… while watching a DVD maybe on a rainy day or something… toss a salad to go on the side and you’ve got yourself something that you won’t feel too guilty about later.  Yummm!!!
recommended

I received no compensation to write this post, though I did receive the pizzas free of charge.  I was under no obligation to write a positive or negative review, or any review at all, and do so freely.