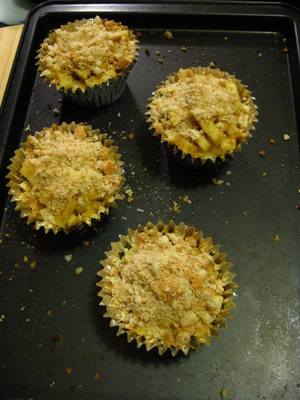 Anyone who reads my site will realize I don’t actually bake and that desserts are kind of an afterthought for me.  They aren’t a priority for me, which may sadden some of you, but it doesn’t bother me in the least. 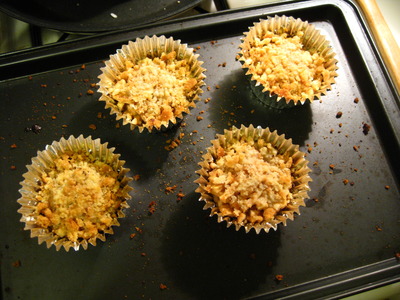 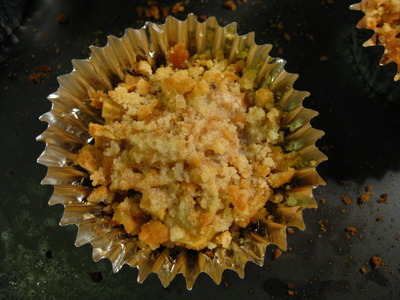 It turns out… I can. 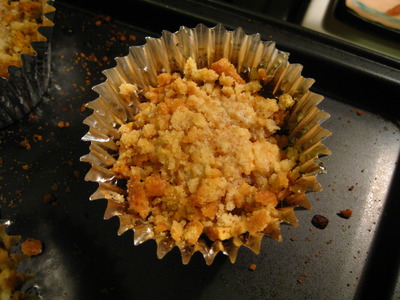 But… what IS that, you’re asking? 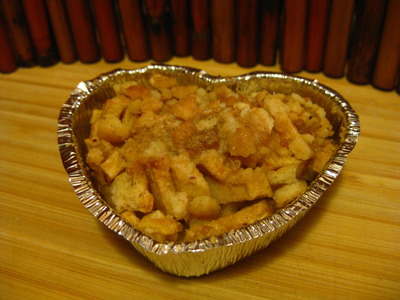 Well, the name comes very simply: after I’d made it, I thought of what it could be: cobbler? buckle? crumble? betty? (none of the above) and all the while, whenever I referred to it in text-form, I would say “that apple thing” except for some strange reason, my keyboard/keypad/everything I use to type basically refused to recognize the “h” – so it became apple ting.  And so it shall remain, apple ting, because I don’t know what else to call it.

Brief side note: it will horrify many of you to know that when it comes to dessert, I identify with Rachael Ray (who, by the way, I actually like) and sometimes Sandra Lee.  I fake my desserts.  This is a semi-fake dessert.  And it was delicious.  Take that as you will.

Cut out bits of pound cake to line your muffin cups with (I had tall round ones, short cute-shape ones, ramekins, whatever you want to use, you can use, really).  I cut slices then broke them into bits and pressed them gently into the bottoms of my liners.

In a bowl, toss the diced apple with a bit of brown sugar, the vanilla extract, nutmeg, and cinnamon.  Scoop into the muffin tins/liners on top of the pound cake.  Top with the crushed butter cookies- I used what I had on hand, which happened to be Danish butter cookies – the kind that, as a kid, I always thought were crusted in salt, which seemed weird to me, but now would totally thrill my tastebuds.  If you’re like me that way, you can add a little pinch of kosher or sea salt on top, to balance the sweetness of the apple ting.

Top each tin/liner with a generous pat of butter; bake at 350 degrees for about 20 minutes or until the top looks golden crusty like.

Serve with ice cream if you like… but definitely enjoy.  You can eat these hot or cold.  The BF really liked these.

***I made the spices optional because BF hated the nutmeg alone, but was fine with cinnamon and nutmeg, though I tried it in all combinations, with or without and mixing them.  Also, I didn’t include measurements here – well, I rarely do, but this time because I don’t know how big your apples are, or how big your muffin tins are either.  I can’t tell you how many this will make.  With 1 apple, I sometimes came away with two apple tings, and once came away with 4, depending on the size of the tin/liner I used.  So just play around with it, it’s fun!

(As the apple bakes, it’s supposed to release juices that soak down into the pound cake, and everything comes together to make this wonderful and amazing dessert… that looks so difficult but wasn’t… is delicious… and makes your entire apartment smell heavenly.  Mmm.)