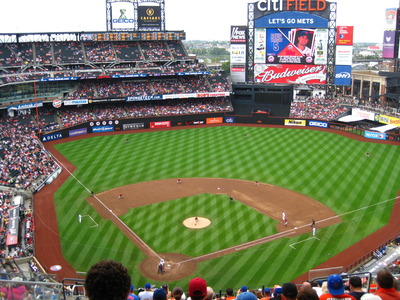 David Wright’s first at-bat on August 2, 2009, versus the Diamondbacks

By the time this post goes up, baseball season will be winding down.  For some teams, the pressure will be high as the race becomes neck and neck.  For my team, at this writing, it is looking unlikely that the race will apply to me.  We are struggling right now, and ending the season above .500 looks like a good goal at this point.  Many of our best players are on the DL – have been on the DL for much of the season – and it is what it is.

But, as a Mets fan, the bottom line, the resounding cheer is… ya gotta believe.  I believe.  Until the numbers are such that it is statistically impossible – not simply improbable – I will hold fast to the faith that something amazing can and will happen.  Ya gotta believe.  Otherwise… what’s the point?

In any case, though I’d decreed my last post about Citi Field the post, basically, I’d eaten most of what it had to offer and decided that Box Frites + Mama’s of Corona were what I’d recommend to people going to Citi Field for the first time… well, this game we tried some new (to us) stuff.  So I figured I’d post about it.

This was actually a rain delayed game – we sat in our seats for three hours, waiting for the game to start – did I mention it was our 6 year anniversary as well? poor B, who isn’t even as into baseball as I am, but he was infinitely patient as we waited for the game to start.  And it did start 3 hours after the posted start time… and we lost, 5-2, which hurt a lot.

But you’re not here for the baseball, are you?  I wish you were… 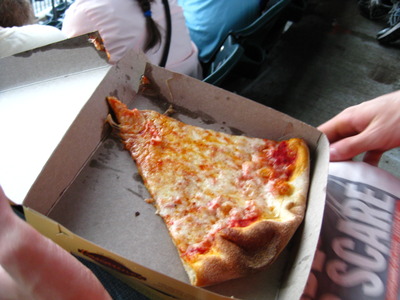 Because it was pouring as we got there, we rushed to our seats to sit under the overhang.  We were both starving, and decided to grab whatever was closest – in this case, pizza for him… which was doughy and unimaginative, but as B said, after I made a face to his choice of pizza and told him he hadn’t liked it last time, “Sometimes I’m just in the mood for shitty pizza.”  Okay, babe. 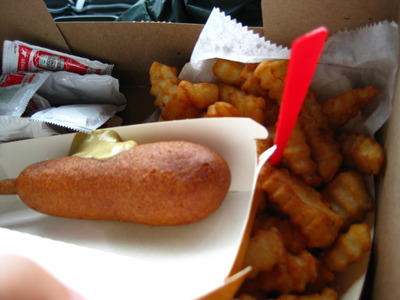 As for me, I wasn’t too hungry and I really didn’t know what to get, though I’d casually mentioned to BF that I hadn’t yet had a hot dog at the park.  He frowned and said with disbelief, “Really?” which gave me great pause, and I found this.  Guess it was just that unmemorable?  Anyway, this prompted me to walk over Nathan’s, where I suddenly lighted on “corn dog” on the menu for $4.  I got really excited, having really enjoyed my last few corn dogs… and decided to get one.  Since it was raining, everything was really fussy to juggle and get ketchup, mustard, etc. – so you know I’m not weird and just blob on mustard on one corner.  (When I’m carrying a lot of stuff and everything’s fussy and I’m hot/wet/sticky from the weather, and there’s an umbrella involved… let’s just say I get grumpy really quickly, so it was good I got this out of the way fast.) 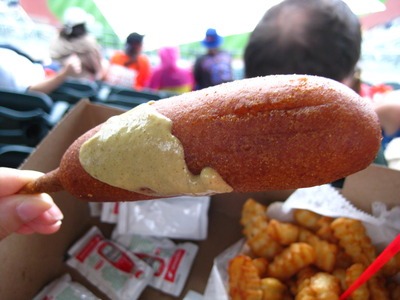 Here’s a better shot of the corn dog with a little blob of mustard on it.  You can kind of see the field in the background with the tarp down, too. 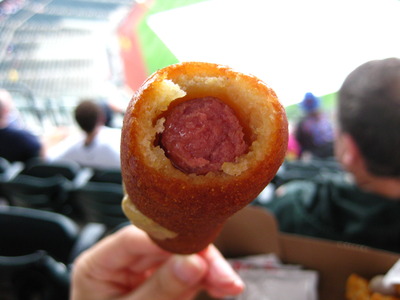 First bite!  Okay, honestly?  I don’t know if it’s a result of not having had many corn dogs in my life.  But this was really good.  As you can see, there isn’t excess corn-exterior to too little hot dog interior – the ratio was perfect, with the gently sweet and crispy corn part contrasting beautifully against the juicy, salty hot dog part perfectly.  I mean… this was blissful.  I actually would like another corn dog everytime I go to the park!  Seriously!  And $4 doesn’t seem outrageous but then I don’t know how much corn dogs are supposed to be.  Anyone else know?

***Note that I did tell BF that it was really good and had him try a bite, and he agreed that it was good, and I know for sure he’s had corn dogs way long before me elsewhere, though I don’t know where.  He thought I was weird when I told him I never had one.  Maybe he had them at Coney Island, because he also said I was weird for never having gone to Coney Island.  I don’t know. 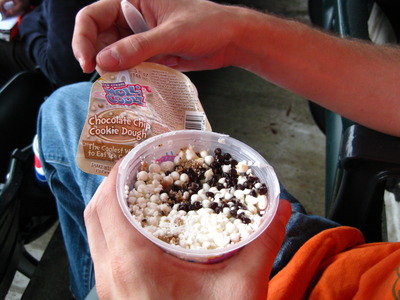 While we sat at our seats, chatting and whatnot, vendors would occasionally pass by.  We’d seen the Molli Coolz stand outside and wondered briefly what happened to Dippin’ Dots … so we decided to try it.  And these were filthy disgusting.  That small cup was $6, but prices are what prices are at the ballpark – but the ice cream was just offensive!  It was chalky and milky tasting, and just… not good.  Blegh.  We both agreed we would NOT be getting these again (and they offer Dibs at the park, too, so I’d suggest sticking to those). 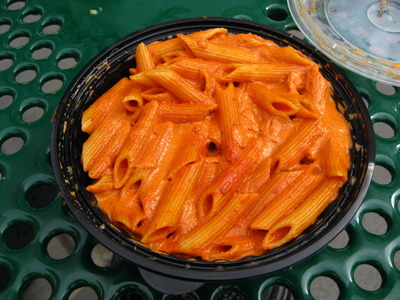 Funny enough, after the game started, we decided we were a little hungry again, so we walked over to the Taste of the City.  I actually wanted Blue Smoke, some ribs sounded good, but as we passed by Nonna Delia’s aka Cascarino’s near Taste of the City, I remembered they had pasta dishes like penne alla vodka, etc.  So I walked over and BF wanted to split one, and I’m not going to deny that on those days when you’re cold and it’s rainy out, nothing hits the spot better than a nice big bowl of saucy pasta!

And while the sauce was pretty good, seasoned appropriately and tasted nice, the pasta – which I actually expect, given that it’s pre-made and sits there in a warming thing for a while – was overcooked and way past al dente (our preferred level of doneness for pasta).  We also actually managed to grab the last of the penne alla vodka that day, so that might have added to the deteriorated texture issues – but it was suitably tasty and hit the spot.  Between the 2 of us, we didn’t finish all of it, leaving a little bit, but bear in mind, we also ate everything else in this post as well.  At $9 for the portion, not too shabby – BF and I actually mentioned how a lot of pasta places in his neighborhood charge $11.95 and up for a plate of penne alla vodka, so this isn’t outrageously priced whatsoever.

Yvo says: Y’know, I really enjoyed my corn dog.  The pasta was decent, though definitely not a go-out-of-your-way kind of thing… and I’m pretty sure the corn dog is available all over the stadium, so no need to go out of your way!  (The pasta may or may not be, I’m not entirely sure.)  Avoid MolliCoolz because that is chalky wackness, and the pizza sucks too (unless you like thick, doughy, yucky pizza, which some people do!).  So a winner, a maybe, and two losers… all in all, a good day for food (especially since, after the game, BF and I went to Pho Bang and picked up some yumminess for dinner at home over a movie… yum!).  Not so good because it was the day I wound up hurting my ankle… but that’s another story for another time, eh?  🙂

Citi Field
all over