CSA stands for Community Supported Agriculture.  Essentially, one purchases a ‘share’ in a local farm – much like the stock market, one then has a vested interest in seeing the farm succeed.  Dividends/pay outs come in the form of produce – vegetables and sometimes fruit.  Different farms do things differently; my farm happens to be also organic, and I pick up my box each week – Tuesdays for me – from a local location.  Join me on this journey – my inaugural season with a CSA – as I explore the various vegetables I receive and what I can do with them to turn them into delicious happiness…
For more information on CSAs, click here.  To find a CSA local to you, you can click here or for one in NYC, visit JustFood.org.  I found mine by typing “Forest Hills CSA” into Google – my neighborhood name + the word CSA, and I’m sure that would work for you as well.  Good luck and enjoy the fruits of your labots… har, har.

A bunch more new items in this week’s share and more learning!  Always a good thing 🙂 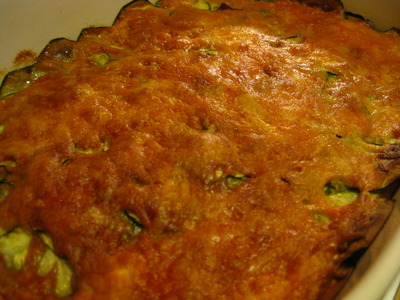 This week, we received more zucchini than last week.  Since I wasn’t completely satisfied with last week’s gratin result, I redid it, this time using two zucchinis and… after layering down one thinly sliced potato, I minced up three cloves of garlic, scattered that around, and laid down thinly sliced onion before proceeding to the zucchini layers.  I also used a shredded cheddar/mozzarella/monterey jack blend this time – because that’s what I had on hand.  Ummm… while this did add some extra depth of flavor, and I LOVE garlic… this proved to be a little too garlicky.  Wow.  Maybe because the garlic didn’t seem to cook too much, so it was pretty powerful stuff. 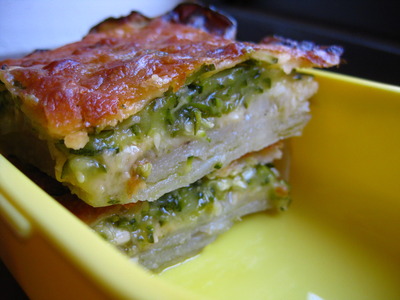 Side shot of two slices that made it for bento (actually most of the gratin was bento).  Mmm, it was still damn tasty! 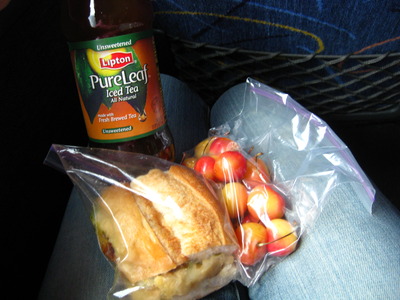 Oh, and the last slice was pan-fried and slipped into some bread for a sandwich… which became my breakfast during my quick visit to DC (separate post to come explaining all about DC… oh, boy!).  (Although if you follow me on Twitter, you already know all about that trip, huh?  Hehe.)

We also received a bag of lettuce mix… as I’ve mentioned before, I don’t really know what to do with the lettuces or lettuce mix that would be interesting enough to post about on here.  It’s… salad, really.  Although I did kind of force myself to think outside the box and came up with something semi-interesting, or an idea of what it could be! 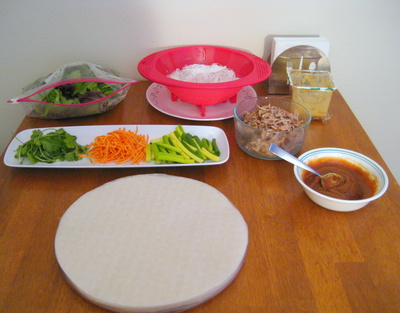 Filling, or part of the filling, in summer rolls!  Now, this would normally make its own post – I mean, look at that, I clearly took that photo to start off a post, right?  Yeah… here’s the thing.

Once again, FAIL!  But I’m okay with it because it wasn’t entirely my fault.  I mean, it was, but… well.  Anyway, so on the table you see the set-up for making summer rolls (minus the huge bowl of warm water, because … it’s a bowl of water, do you really need to see that?  Plus I didn’t have a bowl big enough so I used a huge one that just took up space and blocked stuff for the picture).  Top left is the lettuce mix in a bag (washed), noodles/Vietnamese vermicelli, some miso sauce I made (which you’ll find out more about in a little bit), a plate with cilantro, shredded carrots, and sliced scallions, a bowl of homemade pulled pork (plain/not sauced with BBQ), and a bowl of peanut sauce… and a big stack of dried rice skins?  Whatever you call those. 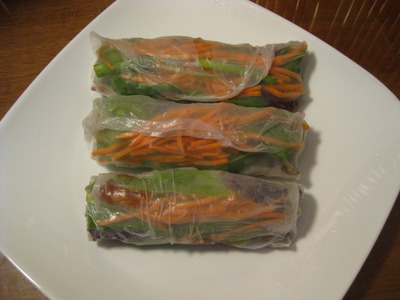 I really just basically moistened the wrappers until they were pliant, placed them on the plate, laid down a bit of every ingredient and dressed it with peanut sauce. 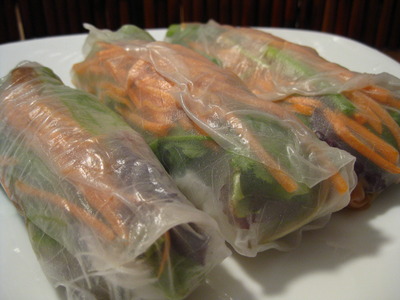 I was seriously proud that the wrapping process didn’t escape my clumsy grasp – I mean, ok, they’re wrinkly and ugly, but they’re not torn apart and COMPLETELY AWFUL (by my standards… really they are quite terrible, if you’ve ever seen the real deal, I need to watch an expert make this and learn!). 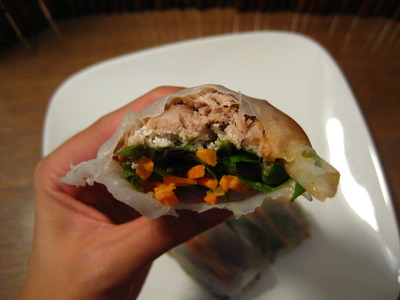 The problem was – and thank goodness I didn’t just keep wrapping without trying one! – the noodles I bought had Vietnamese writing on them, and I wanted these to be pretty much exactly like regular summer rolls except without shrimp, and extra pork.  But apparently I skimmed the directions which said to soak them… then steam the noodles.  So I wrapped these without steaming them and the noodles tasted a lil raw/starchy… and I just couldn’t bring myself to stand over the stove and steam the noodles to make them better.  I tried frying the noodles quickly but that left a big globby mess in my pan.  Boo.  Judging by the look and feel of the noodles pre-steaming, though, I am pretty certain I had the wrong noodles anyway (doh!!!).  If anyone can give me a brand name/where to find the RIGHT noodles.. much appreciated!  🙂

Despite that moment of stupidity, though, the taste (other than the raw-ish noodles) was pretty good.  Since I’d kept the noodle ratio very low, if you ignored that starchiness, the cilantro, the green onions… and the peanut sauce… all worked together to create a nice, bright taste to everything.  I was happy with my imagined recipe, and will try it again either without the noodles or once I find the right noodles 🙂 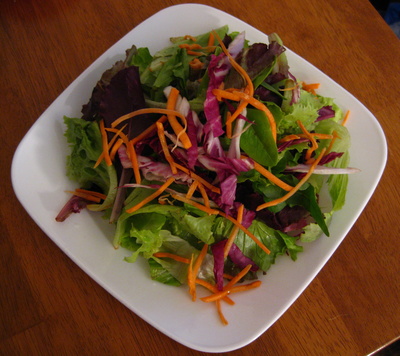 Next, a simple salad with radicchio, Romaine lettuces, shredded carrots, and lettuce mix.  Pretty good, dressed simply, letting the flavors of each ingredient shine on its own. 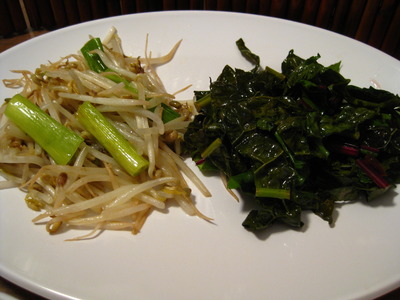 Also, for a meal that’s getting its own post, I sauteed the beet greens and collards together (the right side of the above plate) for a quick veggie side.  Unfortunately, I wasn’t too enamored of the taste – finding it kind of bitter and well, really… tough to chew.  See, I’m getting into this tizzy over not wasting, so I didn’t toss the collards stems… I threw them in first to soften them, but, uhhh, not long enough apparently.  I really was ready to toss it all… except… well, you’ll see.

Oh, and the Cippolini onions and beets… I roasted those simply – at the same time, but not together – and tossed them into bentos.  Twice. 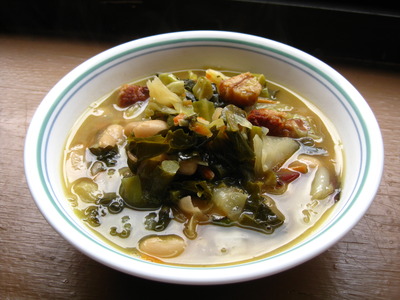 And last but not least – it started raining one day when I was coming back from the gym, so I excitedly threw together a soup around the Savoy cabbage.  Of course, before the soup was done, the rain stopped, but this soup was really damn delicious (and you’ll see how I made it last a week… in next week’s post!).

I took some maple sausage links from my freezer and chopped them into bits, put it in the bottom of a pan and let it go for quite a while, getting them crunchy and really well browned.  Then I added garlic and onions, letting them soften, before adding the cabbage.  Oh, and the rest of an open bag of shredded carrots I had.

I added some (homemade) chicken stock from the freezer to deglaze, and the soup was already smelling awesome as it simmered away… but then I added the sauteed greens I mentioned above and let them get really soft… which made them totally delicious, actually, and no waste 😉  And at the last minute, a can of cannelini beans that I rinsed.  Some red pepper flakes for a lil heat and voila, really good.  The veggies came really soft (which was fine, for my purposes), and the little bits of sausage were chewy bits of delight, to be honest.  I was actually surprised by how much I liked the sausage in there – I’ve been cooking without meat for a little bit because sometimes it just doesn’t seem necessary.  Like if I’d made the same soup with bacon, I’m sure the bacon flavor would have been lost and the little bits in the soup wouldn’t have really added much, but this really just hit the spot.  🙂

Not bad, right?  I was pretty happy with this week’s recipes.  Aaand, well, you’ll see next week what made this week even better… 😉