BB’s birthday celebration came a little early this year, and we headed off to The Met for a scavenger hunt.  While we didn’t win – coming in second place, arghhh – I did manage to score a free hunt, hooray! complete with funny story about me & my psychosis, I mean, psychicness – we did have a grand ol’ time and I’ll once again recommend Watson Adventures for great, well-organized and fun scavenger hunts.

In any case, after hunting for a few hours, we scurried down to the East Village for dinner, joined by the significant others.  Per usual for birthday dinners, I chose to only photograph what was closest to me, in this case, BF and my dishes only.  (We wound up being seated at the far end of the table.) 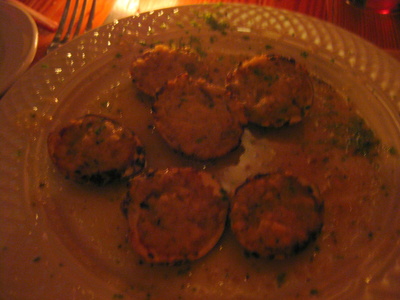 Sorry for the blurry, dark photos, but being an Italian cucina, it was super dark inside, lit only by small candles at each table.  Anyway, BF and I decided to share an order of baked clams – I’m sure you all have heard me say over and over that he’ll tell you he doesn’t eat seafood, then inhale baked clams or fried calamari – which I wound up eating only one and letting him have the rest.  I was alright with these, but he liked them way more than I did.  Plus I’d also ordered 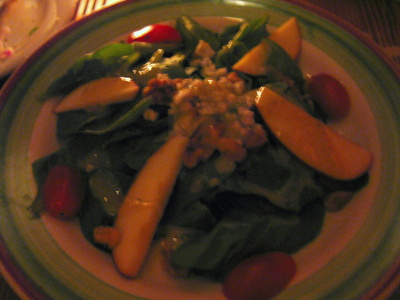 a spinach, walnut, apple salad.  It was alright… could have been more interesting but otherwise, inoffensive and a nice vegetable since I couldn’t find any very healthy entrees to order. 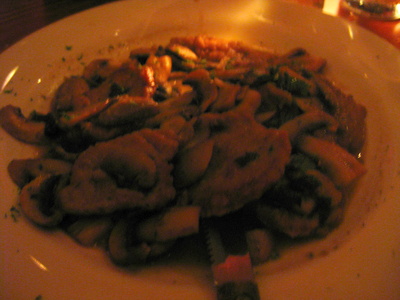 BF ordered the veal marsala and liked it, but said no when I asked him if he would return.  Then he changed his mind and said, “Yeah, I guess, if I was in the area and looking for some cheap Italian food.”  Surprising response coming from him.  *Note: each entree like so comes with ‘linguine with choice of marinara or oil & garlic’ as stated on the menu.  BF requested penne with a plain red sauce (no, it’s not the same as marinara), and the waiter made no fuss, just said ok, which caused the BF to remark to me, after the waiter had left, that he was surprised and pleased, because a lot of places will tell you no substitutions and, at one place, argue with you over whether red sauce and marinara are the same thing. 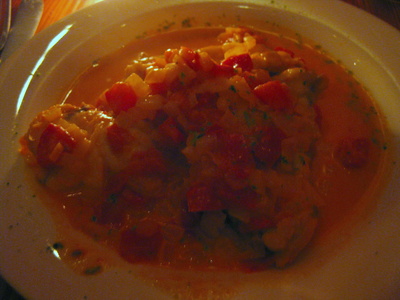 As we were at a place with the word ‘fish’ in its name, I opted to go for a fish dish – monk fish with lobster sauce.  I wasn’t quite expecting to love it, I thought at most I would enjoy it, but I really liked this dish.  The monk fish was tender, cooked perfectly, and the sauce was rich, creamy and tomato-y at the same time, with plenty of flavor.  I gobbled it all up, pausing only to ask the BF if he wanted to try a bite (more out of habit and manners than out of actually wanting him to try any – it wasn’t something I thought would appeal to him, or I’d have been a bit more insistent, though seeing me eating it with great relish did give him pause as he watched me and considered a bite).  It was good.  *I ordered the linguine with garlic & oil and dipped some of it into the sauce, that’s how good it was.  I refrained from eating the whole bowl of pasta like so, though, as we had more to eat… 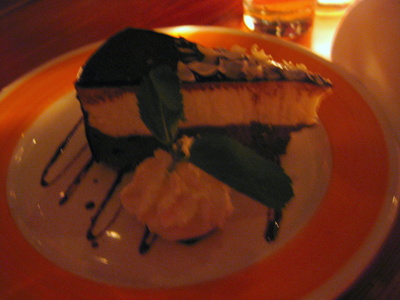 BF got some triple chocolate dessert.  Considering he devoured the whole thing, and I didn’t get to even try a bite, I think it’s safe to say that it was good. 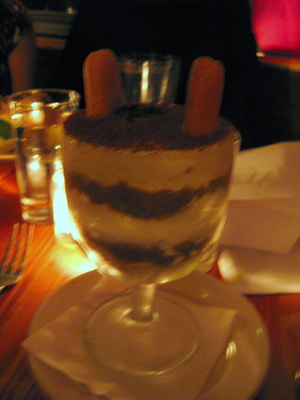 Of course I opted for the tiramisu, which they said was house-made.  Mmm… it was cheesy goodness, but surprisingly heavy, and I wound up only eating a little bit (I shared with HB, but she didn’t eat much of it either).

Yvo says: I enjoyed my meal, and could see going back.  The prices are fairly inexpensive, and the food was definitely good.  The location is convenient to where I hang out, so when I’m bored of Japanese/pub grub, I’ll definitely be heading here for a quick bite (almost forgot to mention that all of my friends enjoyed their food – various seafood dishes – as well!).
recommended