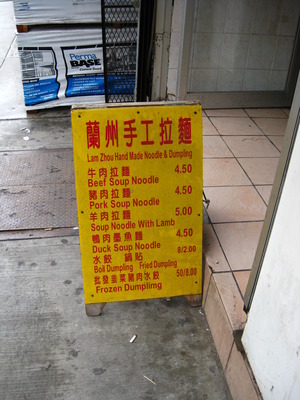 A few months ago, all the rage was hand-pulled noodles.  I hadn’t been to any place – since as I’ve mentioned, it takes me a while to get anywhere for new food trends – but recently, when it was pouring rain in the morning, and I just wanted some noodles-in-soup instead of my normal congee rainy day craving, I headed over to Lan Zhou Hand Pulled Noodles.  They were the first place I’d heard of back when the hand pulled noodles craze hit, and being only a few blocks from the congee place, I knew I could get there relatively quickly by bus from the office and back in time for the afternoon work crunch. 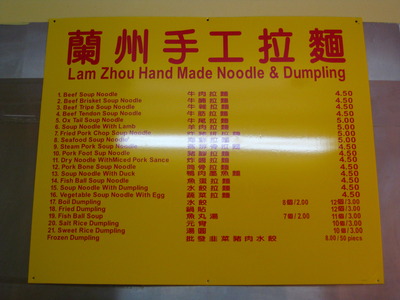 When I got to the place, I immediately grew nervous.  I knew the name of what I wanted in Chinese (sort of; it was what I assumed I wanted), but I couldn’t be sure they offered it, because the English translations aren’t entirely helpful to someone who knows the Chinese name and can’t read Chinese.  When the man pulling the noodles finally acknowledged me, I told him my order – ngau lam mein (beef … something… noodle- if I knew the English equivalent, I’d have ordered it by number or in English!) – and he repeated it back to me in a dialect neither Cantonese (what I was speaking) nor Mandarin (which I don’t speak, but I can generally grasp enough to know what is being said, particularly food items).  It wasn’t even close to a dialect I’ve heard before, so I repeated, and he seemed to agree that I was agreeing to what he said, and he began making my order.  Hmm, okay. 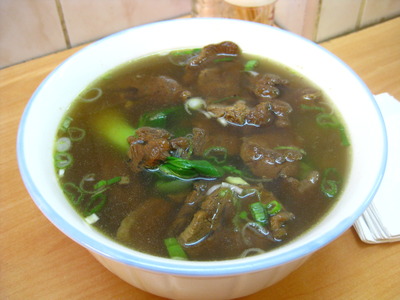 Within minutes, this bowl of piping hot noodles was placed before me, and I mean piping hot.  One of the problems with noodles is that while slurping helps cool them off a little, you still wind up burning the hell out of your lips, and as you slurp, the noodles tend to flail about wildly, spattering all that is near the bowl with soup.  Oily, greasy soup.  My camera bore the brunt of this, but I quickly moved it.  Duh. 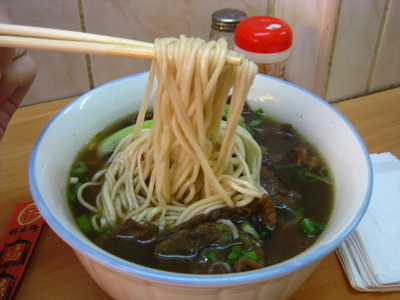 I was pretty hungry, and trying to slurp my noodles down fast, but being so hot, it was pretty hard.  I was also worried the noodles would continue to cook – and then, horror, wind up overcooking – so I tried to eat quickly.  The noodles were so clearly fresh by the chew of them – al dente, but soft, and just a particular heft to them that I can’t really describe other than ‘toothsome’ – a word that has been abused to death by the food world.  Sorry.  I really enjoyed these noodles, fishing them out from the dark broth and slurping away.  The meat was also quite yummy – and plenty of it, to boot – for a WIN.

My only problem here were the crappy plastic soup spoons given.  They were the “American” kind, round bowls that might be OK for chowders and other soups, but for this style, I really craved a deep, long, Chinese-soup-spoon from which I could sip the salty broth, place a few strands of noodles within, and enjoy.  As it was, I couldn’t try too much of the soup, and definitely not with some noodles in the spoon, boo.

There were condiments along the ‘bar/counter’ that I sat at, pickled mustard greens, chili oils, etc. but I opted to eat everything as is this time around.  Next time, I’ll play around until I find the right combination to elevate this already wonderful bowl of noodles further.

And because I’m a pig, and because I could, I added on an order of fried dumplings.

$3 for an order of 12 dumplings.  NO YOU DIDN’T READ THAT WRONG!!!  That’s 12 freaking homemade, handmade dumplings – the skins clearly completely freshly made as well, though I saw trays of the dumplings set out on the tableside, so they were ‘pre-made’ or made before I arrived, anyway – for a whopping grand total of $3.  Can you beat that?  No.  No, you really can’t.  (Ok, my limited math skills tell me that’s 4/$1, which can be beaten by carts, stands, total holes in the wall in various places, but those are different styles plus more skin than meat-innards.) 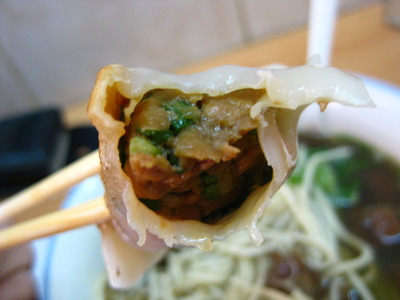 Delicious.  Aromatic (smells like leek-farts! aka delicious), juicy, bursting with flavor and fat from the meat… omg… so good.  You can dip it in black vinegar, or chili oil, but I chose to eat mine plain.  Well, I ate 3 of them, after eating all of my noodles and some of the broth, then asked for a container to take the rest home, which was provided without complaint.  (I wanted badly to eat all of them, but I just couldn’t.  Then I brought the container back to my desk at work, and had to endure the rest of the day smelling them… and having everyone walking by thinking I was sitting at my desk, farting.  Ah well – the things I’ll do for good food, eh?)

I’m not sure how you can top this meal in terms of cheap eats – my bowl of noodles was $4.50, plus $3 for the dumplings, which came to a grand total of $7.50 (tax is already included).  I tipped the rest of the $10 I had because, why not?  The guy is standing there making everything from scratch!!! but this fed me for two meals (the 9 dumplings remaining made an excellent dinner, actually, with some black vinegar dipping sauce that the noodle man had kindly included when I’d requested a box).

Yvo says: If you like noodles in soup, or if you like thin-skinned dumplings, I’d make a trip out here as soon as possible.  If you like both, then you should already be out the door on your way over there right now and not reading this.  Mmm, deliciousness.
highly recommended

My blurb on 3buckbites about the dumplings