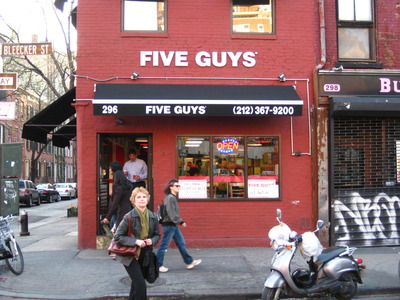 As I’ve mentioned before, SpB occasionally calls out theme nights, and it was time for another burgers & fries night.  HB had wanted to check out Five Guys last time, but they didn’t have any vegetarian options, so it was put off until now. 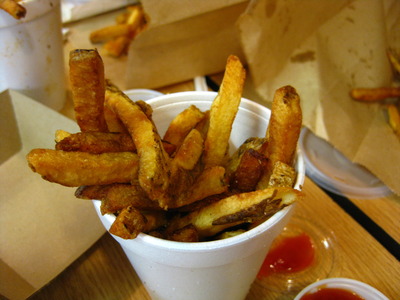 She and I opted to split Five Guys Fries, thinking they were special… they were not.  I mean, they were okay, but just fries. 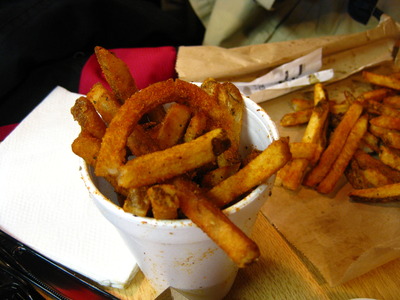 SpB had wisely opted for cajun fries, but happily shared with us when we were dismayed at our somewhat bland fries.  These were tangy and spicy, though I did find myself alternating between cajun and not, since I can’t eat too much heat.  (Yes, I’m a wimp.) 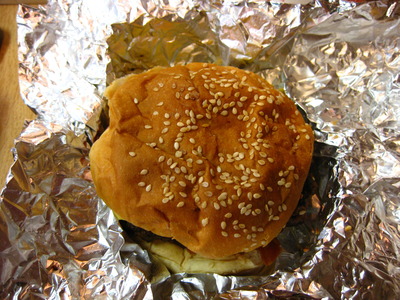 I ordered the “little bacon cheeseburger” because I’d just eaten a chocolate cookie (the exact one in the pic; I wrote that post!).  I didn’t know what it meant to be little, but I was on a good kick there with eating smaller burgers lately.  My friends stuck with the regulars, and I was surprised, slightly amused that my little bacon cheeseburger was more expensive than their regular sized, regular burgers.  Ah well whatever! 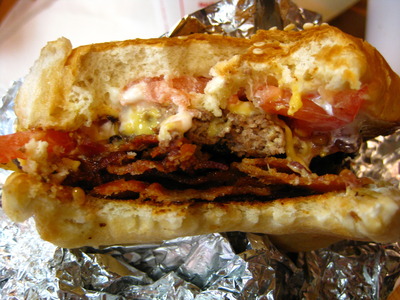 It turns out that the regular burgers have two patties, which made me doubly (HAR HAR) glad that I’d opted for the little burger.  There was plenty of bacon crammed in there to make up for the lack of a 2nd patty, along with a bit of mayo and tomato.  My burger was good, sized appropriately for me, and was satisfying as a burger.  Was it amazing?  No.  Was it OMG I WANT ANOTHER ONE RIGHT NOW?  Nah.  But it was tasty, and I was happy with it… and I would get another one if I was passing by.

Actually, I have plans to take a dieting friend (as a treat for finishing a ridiculous diet recently) to the one in Queens soon… so I definitely liked it above average.

Yvo says: Solid entry into the burger competition in NYC.  (Note that I have not eaten and probably will not be eating any of the expensive/high end burgers… I pay what I think is reasonable for a burger, and that’s generally less than $10… with fries.)  It was good, and the free toppings (menu here) is a nice touch.  The overall burger is worth a try.
recommended