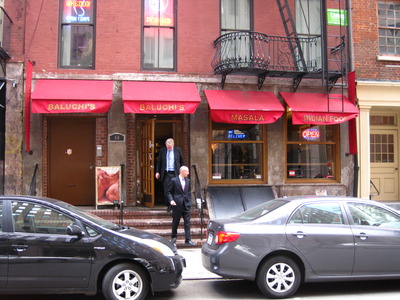 When I first saw Baluchi’s Masala open up, I got really excited.  I really like Indian food, partially because it’s delicious, and partially because it’s super cheap (sometimes — well, if you go to the right places).  I was particularly excited because I hate all the places near my office for Indian food.  They’re all steam table/cafeteria style establishments and I have never seen chicken korma at any of these places.  Just… not good.

(You may notice that Indian is a woefully neglected tag on my site.  This is because, like Thai food, I am incredibly picky and don’t often try new places, I have my favorite place for Indian – which I refuse to review because I go there 2-3 times a month, it costs $9-10 including tax/tip to fill me up to the point of I can’t breathe, and I am incredibly selfish and don’t want to share it with you.  Sorry.

Also, because I feel I have absolutely zero expertise in the realm of Indian food.  I like korma, which is a Britainized? Westernized? Indian dish that was bastardized and changed in the UK then brought over here.  It’s super mild, creamy, and to me, delicious, but… well, although it appears at plenty of Indian restaurants, it’s like saying General Tso’s is real Chinese, or something.  I don’t want someone to come screaming at me that I know nothing about Indian food – which I already know! – because I like korma and then mock my tastebuds.  Hey!  I like what I like!)

In any case, I was excited because initially I only saw “Baluchi’s” and … the first place I ever had Indian food with my friends, the first place I ever had korma was actually at a Baluchi’s in Midtown.  I remember really enjoying the dish and seeking it out in the months afterwards, so Baluchi’s holds a soft spot in my heart (even though they’re damn expensive compared to my fave Indian place).  But then I noticed it was Baluchi’s Masala, and then I wasn’t in the mood for Indian food or whatever, I brought my lunch…

Well, the tides turned when last week, walking by, I noticed it looked less like a sitdown restaurant and slightly more cafeteria-like.  THEN, I picked up a menu, which sealed the deal. 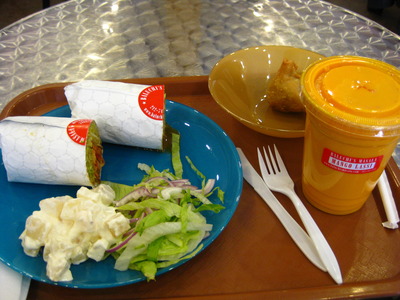 I snagged Spammy, my latest lunch buddy, and off we went.  Neither of us were familiar with kati rolls or much Indian food so it was an adventure… so we both got the same thing, haha.

Now, I first read about kati rolls on Midtown Lunch.  Specifically, this post.  I’ve been wondering about them since then, but I don’t work in Midtown, and I’m hardly ever in that area anyway (and seriously I’m not going to go there on a day off just to try this, sorry but not happening, I’m sure Zach doesn’t blame me).  So when I saw kati rolls on Baluchi’s menu, it was a no brainer.  I thought $7 was cheap, but then I saw the prices listed in Midtown were about half that.  Confusing, but hey, you make do with what you got.

The menu I took says that samosas are $3.50 a piece, as are mango lassis… but when I paid for the above (chicken kati roll, samosa, mango lassi), my bill came to just over $10.  Spammy pointed out that the samosa was listed on the menu as $1, though I’m still not sure how much that means the lassi was… so I can’t help you with prices. 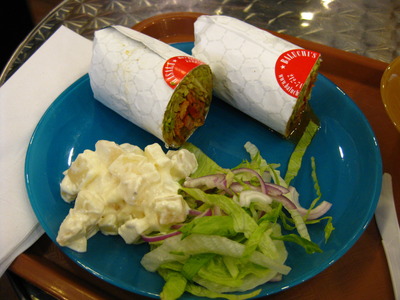 When you walk in, there are two cafeteria style stations – one straight ahead, one to the left – that operate independently of each other, apparently.  We walked straight back and peered at the offerings before placing our order.  The guy said “We don’t have any, we have to make it right now, is that ok?” which confused me.  I said yes, and he said 10 minutes.  Hey, fresh kati roll!  I looked around a bit more and noticed that there were kati rolls (I’m guessing not chicken) pre-made and sitting in a tray on the steam table as well.

It didn’t take 10 minutes, it was much shorter than that actually, received my food and snagged a table. 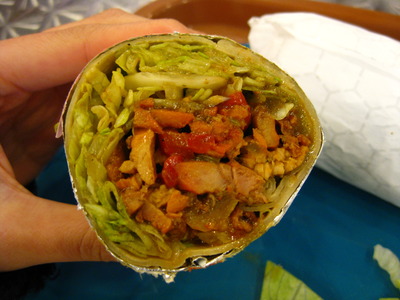 I had read a lot of reviews that said their kati rolls were dry, so I was surprised when I noticed a pool of oily sauce? dripping out of one half of my kati roll.  I guess they fixed that issue since the last one!  This was very tasty, the chicken moist and the lettuce doing a good job of adding a textural and taste counter to the rolls.  Spammy at one point thought there was too much lettuce, but then moved on to the other half of her roll, which had more chicken and less lettuce.  I had the same issue – when she said there was too much lettuce, I thought there wasn’t enough, but then the other side had the opposite problem.  So the rolls aren’t made too evenly, but at least ours were fresh!

Oh, the salad was a bit blah until you mixed it with the potato salad, which was good, but you know, I like potato salad.  The lassi was thick and deliciously tangy… and the samosa?  Sorry, it was totally forgettable and I’d have been PISSED if I paid $3.50 for it.  The outside was not crispy and the inside, being potatoes and peas, was total mush.  Maybe if it was freshly fried, it’d have been better…

Yvo says: Something different for lunch, and not that messy to eat – I just peeled the foil away as I ate and didn’t manage to get any sauce or chicken on me!  (Wait, a piece of chicken fell into my sleeve, but we don’t have to count that, do we?)  It was tasty and filling, and I can totally foresee going back  for another one, to try other stuff – they have a lot of tasty looking offerings! – although I’m curious now.  For anyone who has tried kati rolls elsewhere – most specifically, in Midtown at Kati Roll Company – is this a kati roll as you know it?  I think it’s much bigger so that justifies the price in my mind… Thoughts?
recommended