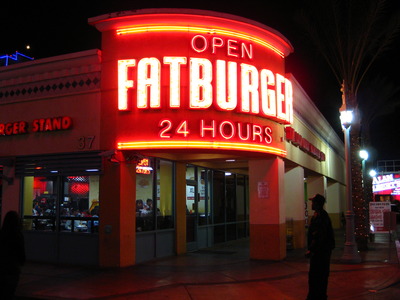 After we’d gorged ourselves at the Rio Buffet, it took about 9 hours for HB to actually say, “I’m hungry.”  Which is kind of amazing – the H in HB stands for Hungry.  What was even more amazing was that I was still absolutely not hungry, but you don’t stand in HB’s way when she says she’s hungry.  If you’re smart, you step aside and let her lead the way.

She led us directly to Fatburger, knowing that I hadn’t eaten meat in about 6 weeks, she thought wisely that I’d want a burger.  HB loves In & Out, but it’s not on the Strip and she said she was fine with Fatburger if I wanted a burger.  Yes… she loves me. 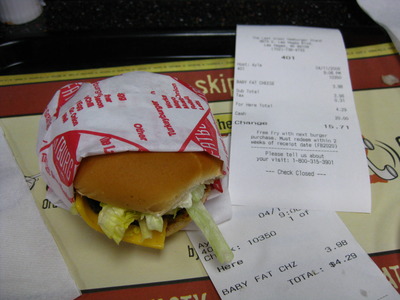 Since I really wasn’t actually hungry, though, I opted for a Baby Fat, which was the perfect size for me.  Slider-ish.  With cheese of course. 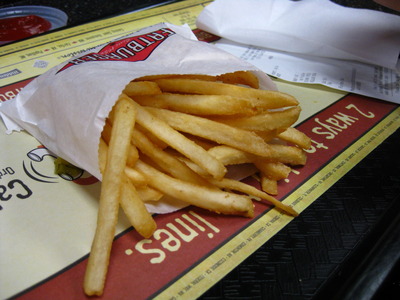 HB ordered fries, so we split those.  A note here that the numbers they give you on your receipt that they then call out when your order is ready – the numbers seem totally arbitrary.  We were 401 and 402, but somehow, they were up to 150 or so.  At some point, they skipped straight to us, and people complained that their numbers hadn’t been called yet.  There was only one line so we weren’t sure how there came to be other numbers, but whatever, we were ready to eat and took our food eagerly. 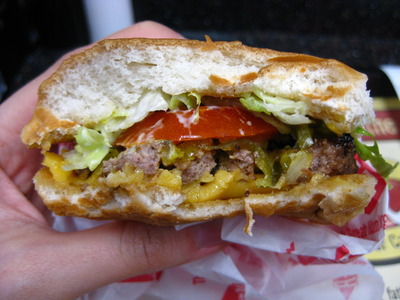 So, while chewing my burger slowly, I noted something crunchy in my burger.  HB suggested the pickle, and I responded, “No, crunchy, crispy, like something dry crunchy.  I don’t see onions.  I wonder what it is?  It’s almost like deep fried onion crispy.  Hmm.”  I peered at my burger and discovered that there was enough charring around the edges to give it a distinct crunch.  If charring = burnt bits to you, and you don’t like that, that might be a turn off.  I was actually kind of into it, marveling that they’d actually gotten a nice char on the burger.  The overall flavor was pretty good – everything coming together to work nicely – though I can’t say the meat was well-seasoned or anything, because it was a small patty and it didn’t dominate the burger.  Every component of the burger – cheese, mayo, mustard (I think), tomato, lettuce – just built upon the meatiness of the patty and took it where it needed to go. 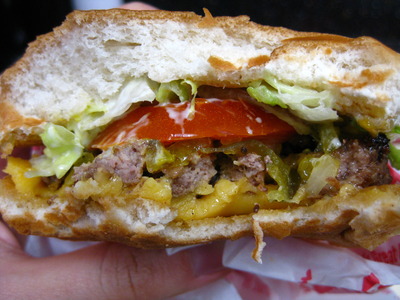 Yvo says: Totally satisfactory burger.  I don’t think it’ll win any awards in my world, but it will sate that burger craving right nicely.  Considering the convenient location on the Strip in Vegas, I know I’ll be back for more burgers over other Vegas trips.  The Baby Fat wasn’t too big for my slider-preferences, and tasted great.
recommended