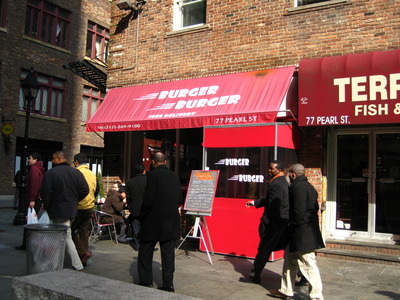 You may have heard by now that I’m basically going meatless (temporarily).  So, as one of my last meals before doing so, I headed over to Burger Burger, which had been on my list since I first saw the awning go up probably over 2 years ago now, when I still lived so close I could look out my window and see the bright red awning.  It’d returned to the forefront of my consciousness when DK posted about it over on Midtown Lunch.  What caught my interest was, of course, the Thursday Special. 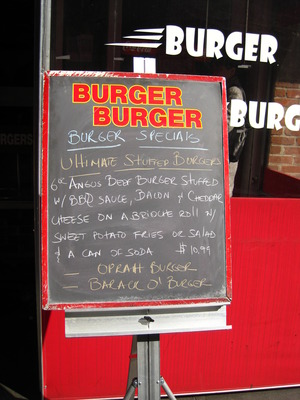 HI BACON STUFFED ANGUS BURGER NOMNOMNOM.  I swear, I’d forgotten about it and just happened to decide that I’d visit on a Thursday… but I think it was fortuitous that I got to eat this as one of my last meat-meals… mmm…  I went inside and found a small crowd, and was annoyed to find there was no real rhyme or reason to everyone just standing there (and people pushing into me while I was standing on what looked like a line).  It turns out you just go up and order, there was no wait to order… just a wait to receive your order.  (Ordering is fast; they don’t have many items on the menu, though they have a ton of variations on actual burgers.)  After you order, you receive a ticket with a number on it, and you wait until your number is called.

After placing my order, I was amused to note that, as DK had predicted, there is now a Obama Burger… although they call it something slightly different: 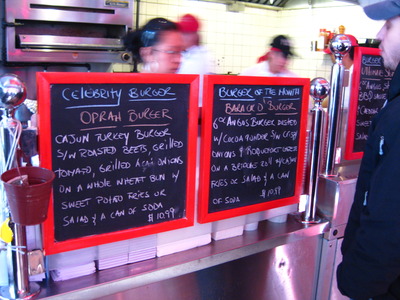 I don’t know to be amused or if it’s offensive that the Barack O’Burger is dusted with cocoa powder, though I do wonder what that does for flavor.  It sounds really interesting though, and I’m curious how the exact combination came to be.  However, with such a large lunch rush, I quickly decided not to ask at that moment.

My order took 20 minutes from ordering to bag in hand and out the door.  $11.41 and a punch in my card that promises after my 10th burger purchase, the 11th will be free later, I was heading out (I wanted to sit and eat at the small counter, but when I’d been sitting there while waiting, people kept pushing into me, and I had a feeling that if someone did that while I was eating, and I got up to punch them in the face, I’d probably be arrested and I don’t usually like to end lunch with jailtime – a night out with friends, well, OK, sh*t happens, but not lunch.  How would I explain that at work?  “Hi, I can’t come back to work and I’m using my one phone call to tell you I’M IN JAIL because some d-bag pushed me while I was eating, didn’t apologize and I took it upon myself to respond with a fist in his face” um, anyway).  Unfortunately, I had one more errand to run, so I did carry the burger (carefully) around for 20 minutes before finally settling into a table at my workplace cafeteria to dig in.

I eagerly opened up the container; I’d been inhaling the incredible aroma for 20 minutes and could not wait!  This is what greeted me. 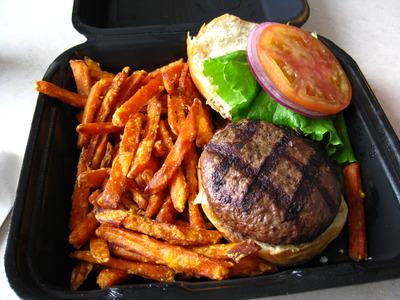 Alright, I know the bacon is inside, but what about the BBQ sauce?  The cheese(s)?  (Note: DK’s review mentions the special as having both cheddar & pepperjack cheeses, but the sign I took a picture of above clearly says only cheddar; they must have changed the special, sadly.)  ARGH.  I was so hungry and the place is only about 2 blocks from my office, but going back out to get it fixed… sounded f-tarded (my new word: use it, spread it, love it!).  I debated calling up to ask them what up! and seeing if they could remedy it somehow.  All of this took about 10 seconds in my head to think before I was like, wtf, just eat it, you idiot, it’s getting cold and you’re hungry and at this point seriously?  FINE they didn’t put the BBQ sauce and the cheese but don’t be such a baby about it.  Bacon waits for you inside.  (I even lifted the rounded puffy patty a little to see if there was anything underneath; there wasn’t.) 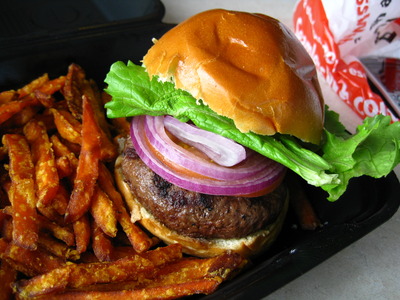 Since there wasn’t any of the wonderful accompaniments that I’d expected, I decided to eat everything they’d given me with it.  (I don’t normally leave on so much stuff.)  I took a big bite and dug in; make the best of what you’ve been dealt, eh? 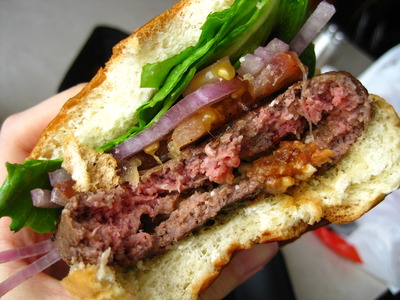 Hmmm… while chewing around for the bacon, I felt something liquidyish kind of squeeze out.  What’s that?  And… I… tasted… BBQ sauce… 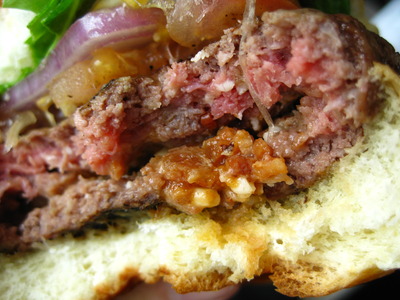 Upon closer inspection – are you at all surprised? – it turns out I’M the f-tarded one!  EVERYTHING is “stuffed” inside the burger patty, the cheese, BBQ sauce, not just the bacon.  Mmm…… down the hatch we go. 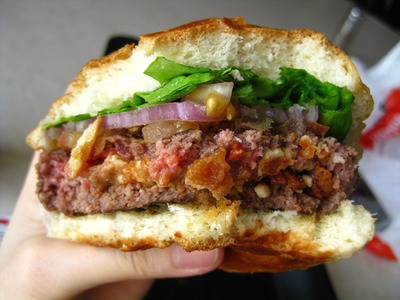 Look at that glorious burger! 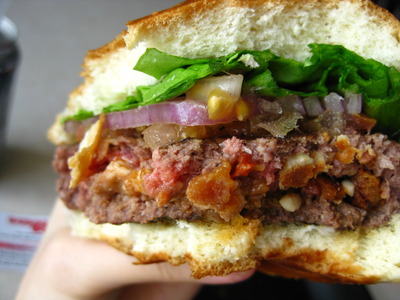 One more, because I can.  (And because I really like this shot.)

I’m kind of glad that I left everything on top, because the raw onion slices actually did a lot to add to the burger’s overall taste and tactile feel, a sharp tang cutting in every once and again.  Was this the best burger of my life?  No, probably because I’m coming to terms with the realization I’m more of a slider kinda gal, but it was pretty damn good regardless.  The flavors all melded really well, working together to bring harmony in beef, bacon, BBQ sauce, cheese, onion (the tomato and lettuce didn’t really add or take away from the burger) all in my mouth and my belly.  It was juicy, and it was a proper size to not feel gluttonous nor wimpy.

I did have one issue with this stuffed burger.  Okay, they know it’s stuffed, right?  The girl who took my order asked me how I’d like my burger.  I usually say medium but I don’t know, I said medium rare and there you go.  The inside was medium rare, but this meant the cheese didn’t melt and instead I had little cubes of cheese in my mouth and sandwich that would have been that much better had they been melted, oozing into the patty and each other.  So it would probably have been best to skip asking me how I want my burger and in the case of the stuffed one, just serve it properly cooked.  Otherwise, this burger gets a thumbs up from me and I can foresee returning for more (after the meatless time period is up, of course).

Oh, right, you want to know about the sweet potato fries that it comes with, right?  (Also comes with a can of soda; I took root beer [Barq’s] but they also have Fanta and most Coke products.) 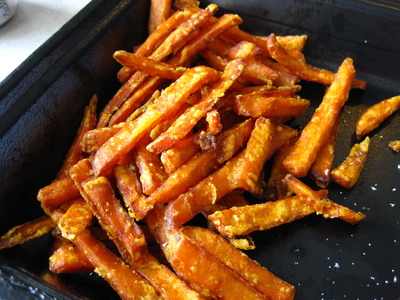 I am not a huge fan of sweet potato fries (had them before, they’re okay) so can’t claim to be an expert, but I do believe in keeping an order the same when you first order from a place (ie, no substitutions to see if you can trust why they’re putting certain items together).  I have to say, these were quite unlike the sweet potato fries I’ve had before, which were about the same size but more “potato” insides, denser.  These were airy – like McDonald’s fries almost, how there’s like, no potato inside? – and really, really crispy.  It looks like they were coated with something prior to frying – flour, perhaps? and just super crispy, with a light sweet potato taste.  Really good.  I was crunching on these and just really happy – I barely added any salt to them and they were fantastic.  Yum.

Yvo says: Overall… a great place to grab a burger.  I’ve lamented the lack of good burgers in the area a long time ago, and now with this place AND Burger Shoppe … well, I can get sliders or regular burgers for decent prices whenever I want!  (Wait, that’s not a good thing… oops! Haha)  I will definitely eventually be back to try other burger specials and combinations here, they seem to have a good following and a good grasp on what works.  I’d be interested in trying a plain bacon burger too, but that’ll have to wait.  The prices aren’t bad – most regular burgers are under $10 – and you can fax or phone in your orders ahead of time for pick up.  They also offer a student discount – I saw a sign that said “Student Discount not valid between 12 pm and 2 pm” – though I didn’t ask how much it is.  I’ll be taking advantage of that on days when I want a late lunch 😉 less wait, too, right!  I definitely recommend this place for those who work (or play) in the area.  (They also offer hot dogs and stuff but why go to a place called Burger Burger for hot dogs?)
recommended