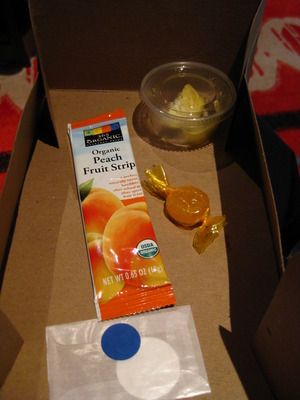 StB and I recently signed up to attend this lecture called Test Your Tongue! The Science of Taste.  We had our separate reasons for attending but we both enjoyed the lecture very much.  Her thoughts can be found here.

The lecture itself was broken into three parts: first, basically a slideshow presentation by Harold McGee of various molecular gastronomic meals of which he’d partaken.  Pardon my near-blaspheme here for a food blogger who constantly bombards the blogosphere with photos of her meals, but after about 5 minutes of this, I began to get really, really bored.  It didn’t help that he wasn’t describing the dishes he was showing us, just talking about the various methods of cooking certain things and how innovative certain restaurants and chefs are – how many dishes from El Bulli are you going to force feed us?!  It just wasn’t as interesting as one could hope (perhaps also because at least if I’m surfing the internet, I can linger over photos I like as long as I want, absorbing what’s going on, and if I don’t like something, I can scroll quickly past it instead; here, I was at his mercy).

However, when Linda Bartoshuk took the stage, her ebullient presence snapped me right out of it.  Though she focused on the scientific aspect of food and tasting/eating, in which I would have told you before the lecture I would not be interested, I found myself fascinated by what she was saying and hanging on her every word.  She led us through a fairly interactive demonstration, using the items shown above (there was a box at each seat when you walked in; well organized to boot! and sponsored by Whole Foods) to prove to us what we can or cannot taste with our noses pinched shut (the peach strip smells like peach; pinch your nose shut and take a decent sized bite and you will taste sweetness, but not the peach; release your nostrils and suddenly, peach flavor floods your mouth).

It was a very interesting lecture, and Ms. Bartoshuk really made the whole topic jump, even for someone not interested in science whatsoever. 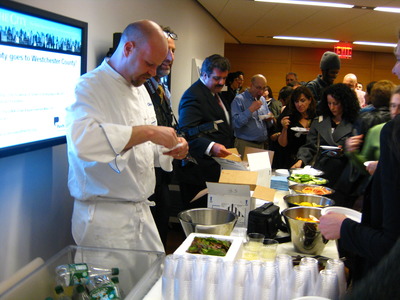 Afterwards, we went out to the reception area and were greeted by this chef of a restaurant in Colorado whose name escapes my mind.  He was distributing miracle fruit and manning a table with slices of lemon, lime, grapefruit, papaya, and a couple of items he’d invented for this purpose: balsamic “caviar” pearls, yogurt balsamic crackers, balsamic poached plums… 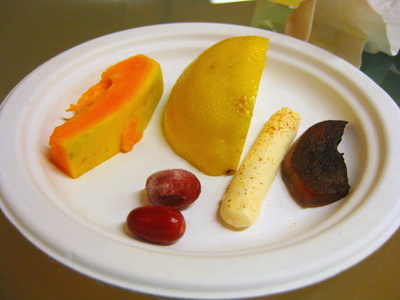 Papaya, lemon wedge, yogurt cracker (which was really good, pre-eating the miracle fruit), poached plum, and two miracle berries.  As mentioned on StB’s site, the effect for us didn’t seem to be as wondrous as other people had reported.  While I was able to eat the lemon (and followed that up with a lime) without my tongue puckering, the acidity still burned my lips when I bit into it, so I very definitely knew what I was eating and couldn’t shake that.  Most of the things above simply didn’t taste good with or without the miracle berries; the yogurt crisp was good without the berries but tasted blah with it.

However, I began devouring grapefruit wedges as they tasted akin to… not candy, but like the best citrus fruit EVER.  Think about what grapefruit tastes like; if you’re one of those people who doesn’t like them, think about what you don’t like and think about eating it with every characteristic that you don’t like just gone.  Vanished.  The pieces of grapefruit were super refreshing, and not sugary-sweet, but simply delicious.  The bitterness, the sour acidity… just gone.  That was, hands down, the one item that impressed both StB and I to no end.

Overall, it was a great experience to have, and the lecture proved to be very interesting as well, teaching me things I never thought about or would never have known otherwise, especially about something called super tasters.  Very fascinating stuff.  (Yes, I am a supertaster.  This was tested by taking the piece of paper in the clear envelope, seen in the first photo, and putting it in our mouths.)  The event was well-organized and had a good sponsorship – Whole Foods – who kindly provided tables of food for the reception, including assorted cured meats and cheeses, a section from their new Mediterranean line of food (spicy… avoid if you don’t like spicy!), and there was free flowing wine (both red and white) and various sodas.  The lecture was priced at $15 for students (hooray being a student!) and $25 for non-member non-students, which I think is pretty fairly priced.  I would recommend lectures from them if you’re interested in the subject matters – here for the listings – but I will be sticking to the food events 😉