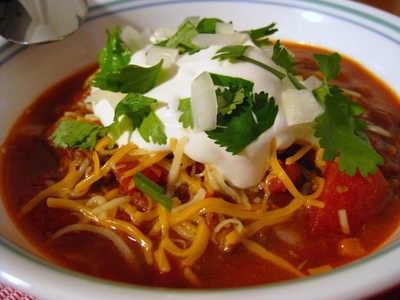 What I really wanted to post this week was a recipe attempt at … well, I’ve hinted at it before.  But you see, this past weekend was designated as “trying to recover from the first week of full time working and part time schooling” so I wound up relaxing just a little bit more than I’d intended…

But I did dig up these photos from a few weeks ago, and well, I like the photos, so I’m going to post them.  Doesn’t that bowl look gorgeous? 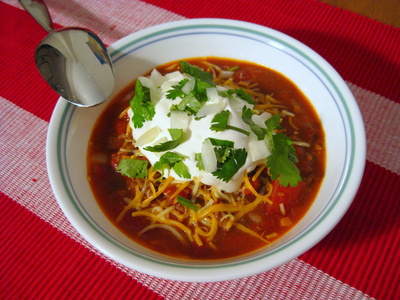 Okay, minus cilantro if you don’t like it, but still pretty damn good, right?

I’m not going to argue with you about the regional variations and how some people might not call this chili.  I really, truly, completely do not give a flying f* whether or not you think this is chili.  If it tastes good, eat it, and if it doesn’t, don’t.  You can call it “Horse Manure” and provided it doesn’t contain horse manure, I will be fine with it, because this tastes good.  So eat it.

And if it really offends you that much, don’t add tomatoes.  Or don’t add beans.  Or don’t add meat.  Whatever is the offensve ingredient to you (or multiple ones), just make it without that ingredient.  It’s not like I’m in your kitchen and will be screaming at you that you’re making it wrong; even if I were in your kitchen, I’d just be thrilled that I am not the one cooking for a change, so I doubt I’d scream at you.  🙂

Also – to explain a little about the above bowls.  I’ve made chili before – recipe here – but I’ve always made and eaten chili as a dip, accompaniment to chips and in some past life I think to pasta and/or rice.  (I don’t recall ever doing that specifically, but I feel like I have or that it’s something I could have done.)  It’s always on the dry side, though I like saucy things, and I had never, ever eaten chili as a soup.  Even though I know that’s totally done in places – it’s served at Wendy’s (the fast food place) as a soup, isn’t it?  (I’ve never had it there, but I’ve seen it.)  It just never crossed my plate as such, so I never made it as such.

Having said that, I was talking to a friend about this fact, and though she seemed grossed out by chili as a soup, I was intrigued, and set out to make it.  So when I got to the part where I add a can of diced tomatoes, I didn’t drain them first and just added them.  Oh, also, where I previously used a packet of taco seasoning, I finally got around to buying ground cumin and ground turmeric, so I’ve been using that for my chili.  Don’t ask me how much; I just start shaking and when it smells and looks about right, I stop.  I also add cayenne pepper and paprika with the same thought, then I taste it and begin adjusting.  I’m sorry to those people who really like hard and fast numbers, but I’ve never been one to do so on this site, so I’m not sure why you’d expect me to do so now ;P

Once it was good and cooked through, seasoned to my tastes perfectly, I ladled some into a bowl, topped with shredded cheese, sour cream, freshly chopped cilantro and some raw, diced onion…….

The verdict?  This was really, really good!  It’s a little low-carby compared to eating the chili with chips, too, so I’m happy about that (although admittedly, I still ate some of this batch of chili with chips… hehehe).  It’s a really good winter-warmer, and I’ve brought it in for lunch a few times as well.  I really like the bite of the raw onion on top as well – even though I include onions in the chili itself, it’s a textural difference and a lovely bit of crisp sharpness to the soup.  The cilantro is good as well (provided you like cilantro), and of course, the creaminess of the sour cream cuts through some of the spiciness of the chili itself.  Everything just works really well together!

Ok, for the sake of being able to label this a “recipe” post, I’m going to attempt to tell you how to make this.

Brown ground beef with garlic and onions.
Add seasonings to taste.
Add can(s) of diced tomatoes.  Bring to a bubble.
Add beans, if using.  Bring back to a bubble.
Serve in bowls (or ooh! bread bowls! yum! oh wait low carb oops sorry) with sour cream, chopped cilantro, diced onion, whatever you like, on top or on the side for people to add as they like.