I recently was sent some samples of the new SoBe lifewater drinks with 0 calories, sweetened using PureVia, made from the stevia plant so yeah, it’s all natural.  All that good stuff.

I’ll be honest, I was really excited when I saw the flavors – I LOVE Fuji apples with a passion.  They are my favorite type of apple and to me, the embodiment of what an apple should be: crisp, lightly sweet, and juicy but not ridiculous.  Not at all mealy or soft, and never tart.  But that’s a little besides the point.

The Fuji Apple Pear flavor… sucked.  The pear overwhelmed the Fuji apple completely, and to top that all off, the flavors were still pretty muted; the overwhelming taste was metallic and just… chemical-y.  I was really disappointed and saddened by this.

However, I tried the Yumberry Pomegranate a few days later and found this flavor had none of the chemical taste, but was nice and fruity, not largely sweet but enough to make it tasty.  I really liked this flavor a lot and have been keeping my eyes open for it in stores (no luck so far!).

The last flavor I tried was the Black and Blue Berry.  While it was pleasant enough and again, had no chemical taste to it (WHY IS IT JUST THE FUJI APPLE FLAVOR DAMN IT?!), I found myself wishing I had more than just the one bottle of yumberry.

PS The bottle design is pretty cool too although when you’re finishing that last sip – if you’re one of those people who finishes the last sip of something, and I am – you have to tilt it a bit more to get the last bit.  But that’s not a big deal.  Is it?  I like the swirly grip. 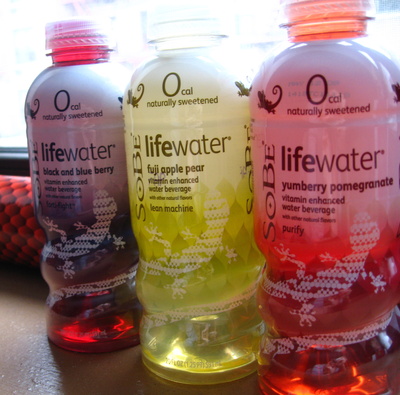