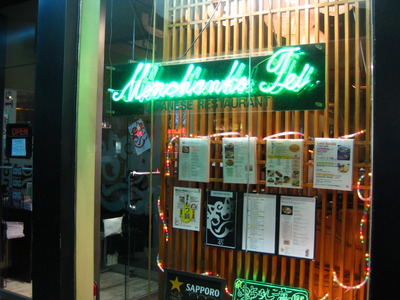 HB had tried this place and been so-so on it, and StB had also tried this place but been fairly negative about it.  I’d been to the location on 55th, but only been meh on it – at the time, my first “ramen” love, Ony, was still open – so I wasn’t all that excited about it at that time.  But recently, one of HB’s Japanese clients had raved about the place to her, this particular location, so we all decided to head back and see what the fuss was about.

***I must emphasize here that when I began going to Ony back in I think 2002, it was novel to me to go to a restaurant for “ramen” and there was no ramen trend.  After Ony closed and I began exploring other ramen shops around the city, I did not return to any of its sister restaurants (Menchanko-tei, Katsuhama or Onigashima).  Having returned now to Menchanko-tei and sampling the same dish [with minor differences] that I used to have at Ony, I will say that this is not ramen like at other ramen shops, the trendy ones.  This noodle type is thicker and I would liken it to ‘lo mein’ from Chinese take out places – the thicker strands of noodles, except in soup.  Which does not make it better or worse, it just makes it different. 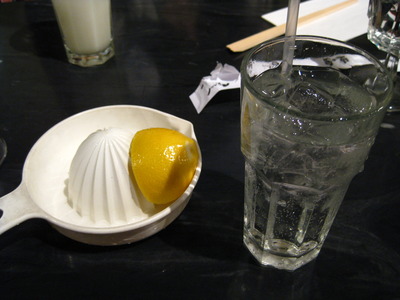 I opted to start off with their “fresh lemon” something cocktail.  I forget the type of alcohol, but squeezing my own lemon juice was different and interesting.  I can’t recommend the drink because it was a teensy bit too sour for my tastes, but the alcohol was mild in flavor and strong in slap. 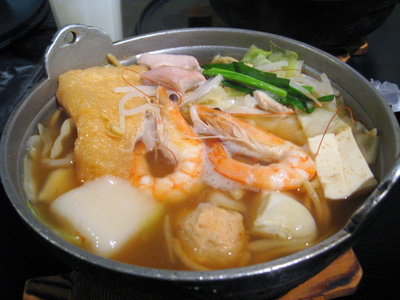 What you really want to know is how the original menchanko was though, right?  It was served, much like it is meant to be, in an iron pot that is screaming hot – do NOT touch this with your bare hands, they serve it to you on a wooden tray so that you can move it without burning your hands.  Honestly?  It was pretty good.  It hit the spot on a cold night before we headed across town to catch Bride Wars on opening night, and it kept me warm and satisfied through the movie.  The noodles are thick egg noodles, chewy, great texture.  The chicken is a bit bland, but the shrimp/seafood ball (bottom middle of the picture) was really tasty, loosely held together and very fresh.  The broth was salty but not in a bad way, just in that soothing way you want your ramen to be (or at least I do).  I wanted to substitute the shrimp for pork, both of which are listed as optional add-ons at the same price, but I was told no substitutions… but whatever.  The shrimp was even okay.  I don’t normally eat shrimp (because I don’t like it).  My one complaint was that my cabbage seemed to be cooking too fast and was getting very soft/soggy, which I hate in vegetables, but everyone else said theirs were fine. 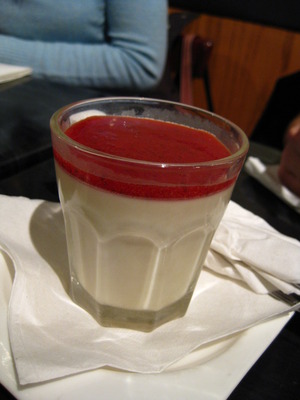 After dinner, we decided to share a pannacotta… because we were all pretty stuffed, you see, but I hadn’t been able to have Ony’s pannacotta in years since it shut down.  Unfortunately, this was nowhere near as good as I remembered, and I wound up only eating a little bit.  Still tasty, but it could have been just a touch better.

Yvo says: There was no lack of Japanese clientele that Friday night – clearly, they are doing something right.  While I wouldn’t say it was mind boggling, it was definitely tasty menchanko, which can be hard to come by in NYC sometimes – especially as of late when the focus is on ramen, not menchanko (a specific type of ramen/noodle dish).  The price is about average considering its prime location near Grand Central – $11 for the menchanko shown above.  Yummy and worth a go if you need to be warmed up fast, and/or if you’re tired of ramen.
recommended