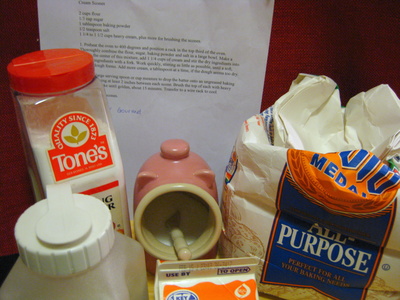 Don’t have a fit here, but yes, I tried my hand at baking again.  I told you, 2009 was going to be the year of big changes, right?  I have to keep learning and moving if I intend to continue to be, y’know, interesting.

So this time, I tried out this challenge issued by The Amateur Gourmet – admittedly, back in November, and my comment there even said I would do it, but it took a while to get around to it.  Again, 5 ingredients, how can I really go wrong here, right? 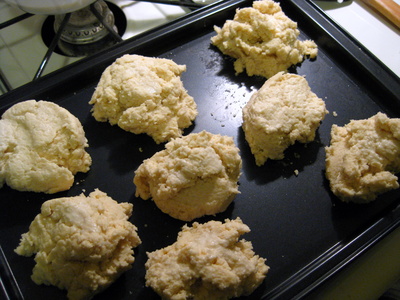 Here they are, ready to go into the oven.  A bit misshapen, but I did manage 8 scones.  I was worried at this point for a few reasons – heeding my mistakes from last time, I’d opted to add a bit more liquid when they seemed dry.  But I somehow ran out of heavy cream, so I uh, added water to my measuring cups that still held a few drops of heavy cream and swished it around, adding that until, I don’t know, it just “felt right” or rather, looked right to me.  I don’t know what it should look like though – I was going blind in my kitchen, the computer far away and I didn’t turn it on to double check.  And yeah. 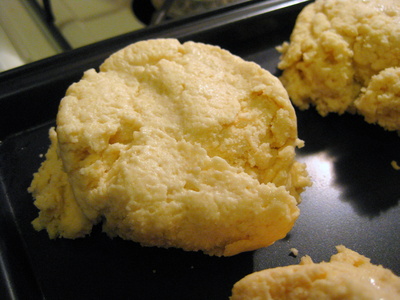 Here’s a close up of one in the corner.  I used a measuring cup to scoop them out and drop them onto the baking sheet. 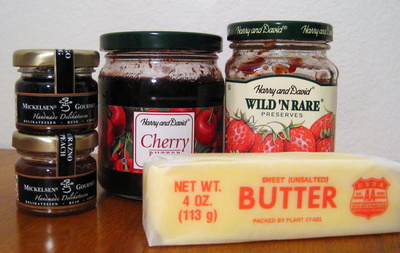 While they were baking, I assembled some things I might like spread on the scones.  Hoping they tasted good… there’s fig preserves, peach preserves (the two little jars), Harry & David cherry butter, Harry & David strawberry preserves (I’m kind of a fiend for H&D jars of goodies – I am addicted to their pepper & onion relish, though I try to curb that craving sharply at all times or I’ll end up eating it for breakfast with cream cheese every morning), and some plain unsalted butter.  Care to guess what I wound up grabbing? 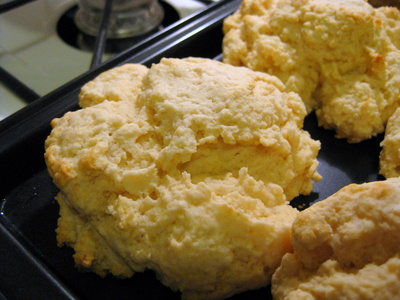 Here’s a photo of the same corner scone, just after it emerged from the oven after 15 minutes at 400 degrees.  Smelled about right.  Felt about right – I pushed it lightly and it resisted but would have given in to a little more pressure.  Hmm. 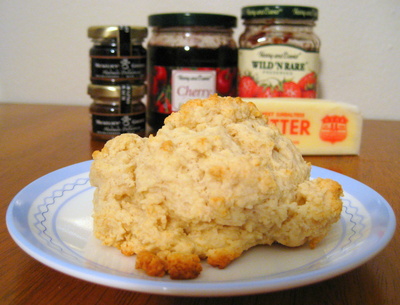 The glory shot!  I have to work harder on getting out of the way of my lamp; I need a longer cord is all.  Stupid shadow. 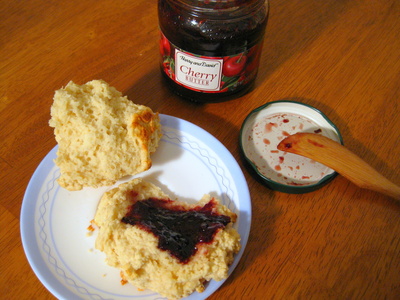 If you guessed cherry butter, you are correct.  Look at that… delicious.

Can I tell you that I actually almost started crying?  These scones were FABULOUS.  Not just because I made them from scratch and properly, too!  Ok, fine, that is really why they were fabulous.  As scones go, they were tasty, especially with other stuff on them, and they tasted like scones should.  But they weren’t like OMG I LOVE IT scones – what really brought them to the next level was the fact that I’d successfully made them.  Honest.  I like the recipe and its simplicity, though next time, making them for the BF, I would up the sugar a bit because he likes them sweeter.  HOWEVER… he did scarf down the entire rest of the bag when I saw them and gave them to him, giving them a thumbs up (although he did say he wanted them sweeter, suggesting a lemon sugar glaze, or … chocolate chips).

I did pack a scone for lunch one day… 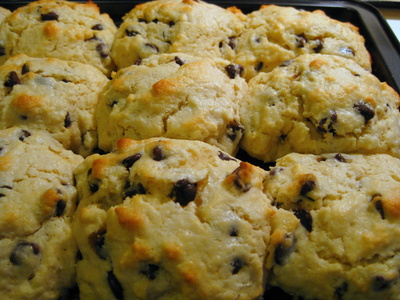 Well, the BF got so excited with the thought of chocolate chip scones, that I decided to try my hand at “just adding chocolate chips” to the mix.  Which I did.  But I think I got overeager with the heavy cream this time, so they came out a lot more fluffy and cake-like than scone-like.  He still enjoyed them, and took as many as I’d let him home with him to enjoy.  Oh, I think I added about 1 cup, to 1.5 cups of chocolate chips.  It came out to 12 scones with the extra mass.

I can’t say it was a total success until I make the chocolate chip scones properly, but that should be soon!  Keep your fingers crossed, I may just have some more baking stories in the coming weeks… MAYBE 😉

« Serial Thursdays: Part 2 of 8: Sharing is NOT Caring
A Walk down Austin Street in Forest Hills »