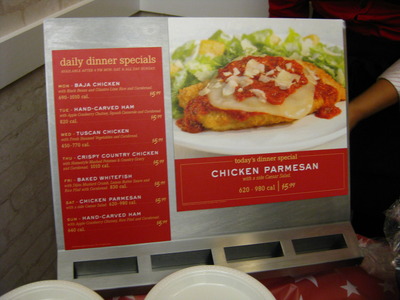 I was invited to a free tasting of Boston Market’s new daily specials menu.  Scoff if you want, but of the fast food chains out there, Boston Market has actually somewhat decent food – at least it’s real and you generally know what you’re eating.  It’s slightly more expensive, but in some cases, it is worth it.  Having said that, I do not eat a lot of fast/chain food in general, but this seemed like a good opportunity to sample some of their newest items. 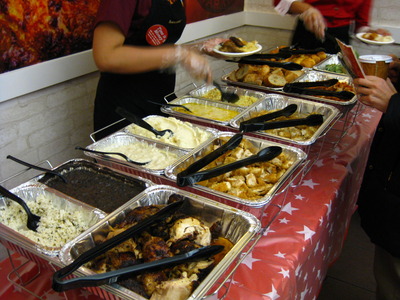 I attended the event at the Boston Market in Forest Hills on Continental Avenue, where they’d closed off the entire upstairs seating area for the tasting.  The above is the sight that greeted me upon arrival – trays set up buffet style, though there were two women manning the buffet to serve people. 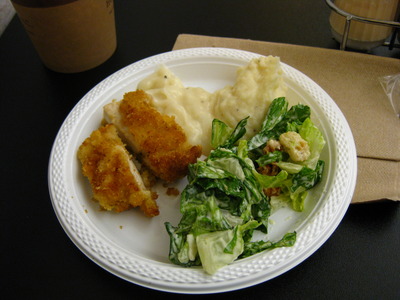 My first plate was Crispy Country Chicken, with the country gravy on the side, and a small scoop of mashed potatoes.  I also asked for some of the Caesar salad that is generally served with the Chicken Parmesan.

Now, I love country fried chicken.  I’m sure southerners will wail at me about how there is no way this can be authentic; I’m not here to tell you it’s authentic.  I’m here to tell you how it tasted, and to this northern girl’s tongue – it was very tasty.  Crispy exterior – check.  Creamy gravy – check, though it could use a touch more pepper – I’m used to peppery country gravy, and prefer it that way.  The chicken itself wasn’t dry and overcooked like most chicken breasts at restaurants tend to be (yes, I said it!  I never order chicken breast if I can help it!).  The mashed potatoes were a bit blah, but the gravy fixed that right up 😉 and the Caesar salad – well, it was passable and edible, though nothing shockingly wonderful. 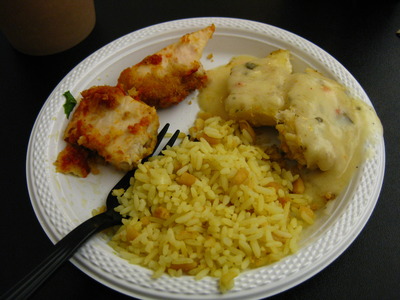 For my second plate, two small pieces of chicken parmesan, two pieces of the baked whitefish with lemon butter sauce and some of the rice pilaf.  The rice pilaf, mehhh, better mixed with the lemon butter sauce.  The chicken parmesan – again, they did a good job cooking the chicken breast without drying it out, so that alone impressed me, though the flavors were only so-so.  I didn’t taste any cheese!  As for the fish, well, not that I would order this probably ever since ordering fish at Boston Market seems counter-intuitive, the type of fish they used was denser than my preference, closer to a fish steak than a filet.  This might not bother you, if that’s your preference.  The sauce was tasty, tangy with its lemon, a good cover for the fish.

These daily specials are available now, though each day a different one is featured.  Check with your local store to find out more…

Yvo says: Honestly?  For $5.99 for any of these complete plates (see first picture to see what each comes with), it’s not a bad deal.  It’s real food, at least, and for someone really pressed for time, I could see the appeal.  The Crispy Country Chicken would be my first choice, but clocking in at a whopping 1010 calories (probably because of the mashed potatoes and the gravy!), I can’t foresee myself going for this anytime soon.  If you don’t have those issues, I really recommend it.  I also recently received a blind mailing coupon for buy one, get one free, bringing the price down to $3+tax for each meal, which is really amazing, considering.  (I suppose I could go pick up this for dinner, eat half of one meal, and pack the rest for lunch to get the calories into a manageable area?)
recommended if you’re pressed for time and want a meal with real, identifiable foods in it, doubly recommended with a coupon

***Please note, I did not attend this event as a “member of the press” – the tasting was open to certain people part of a certain program that has nothing to do with press.  No one there knew why I was taking photos and no one was alerted to the fact that I’d be writing about the meals, nor was nor will I be paid for this post.